Wendy Davis, the Democratic candidate for governor, revealed in a new book published this week that she terminated two pregnancies — one for a nonviable pregnancy and the other after doctors found serious developmental problems with the fetus. Coming as they did in a book published within 60 days of an election, we asked our political and government insiders about the fallout.

Most — 61 percent — don’t expect the news to have any effect on the governor’s race between Davis and Republican Attorney General Greg Abbott. And while 41 percent said the news will not play to either candidate’s advantage, 30 percent thought Abbott would benefit and 23 percent said Davis would benefit.

Seven of 10 insiders do not expect Davis’ revelations to change the set of issues discussed in the race, and about as many said this will not change the overall political debate about abortions and reproductive rights in Texas.

We collected verbatim remarks along the way and a full set of those is attached. Here’s a sampling: 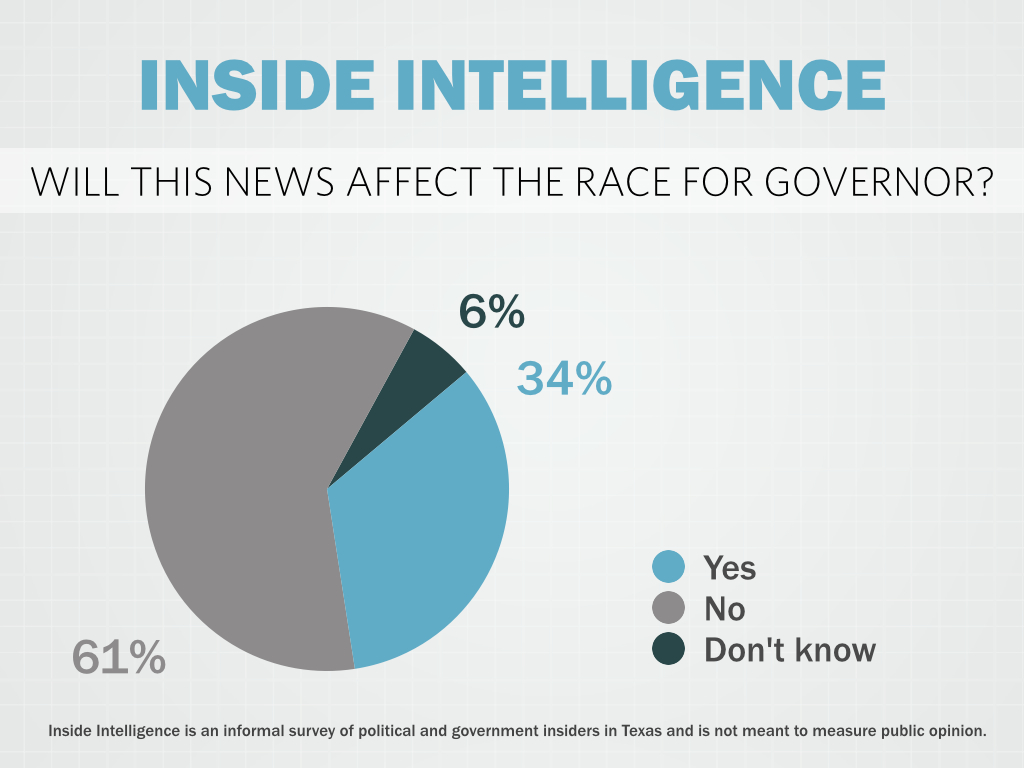 Wendy Davis published a biography this week in which she revealed she had two abortions, one for a nonviable pregnancy and the other after doctors found serious developmental problems with the fetus. Will this news affect the race for governor?

• "Most women understand this is a VERY personal and private matter - the fact that she has shared this information makes her human. Many have faced this same issue and will empathize with her decision. Of course there will be a few crazies who will condemn her - oh wait - they already have done that when she was brave enough to stand and filibuster the HORRIBLE intrusive and unnecessary restrictions set forth in the bill she worked to defeat."

• "The voters will not be convinced to support her because of her filibuster against saving babies that are viable."

• "Another reminder of the issue that made her popular with the base, but unpopular with everyone else; including all but one county south of San Antonio where she lost the primary to an unknown candidate."

• "She chose to abort a fetus because of the possibility of serious developmental problems? Wow! That's cold; end a life because they may have Down's Syndrome, Cerebral Palsy, Autism, Rett Syndrome; conditions in which millions of people live with today. But hey! It's a woman's choice, right?"

• "Abortion is not an issue that you can sway voters one way or the other. Most have an entrenched position on the issue."

• "This news is so powerful it will make abortion a top 5 issue for every likely voter."

• "Only at the margins, if at all. The initial response by the Abbott campaign and some key anti-abortion activists was measured and even humane. Had the responses been harsh, the Davis campaign might not only have garnered the initial sympathy but been able to push back against an unfeeling dogmatism. The measured response took a good bit of steam out of the revelations." 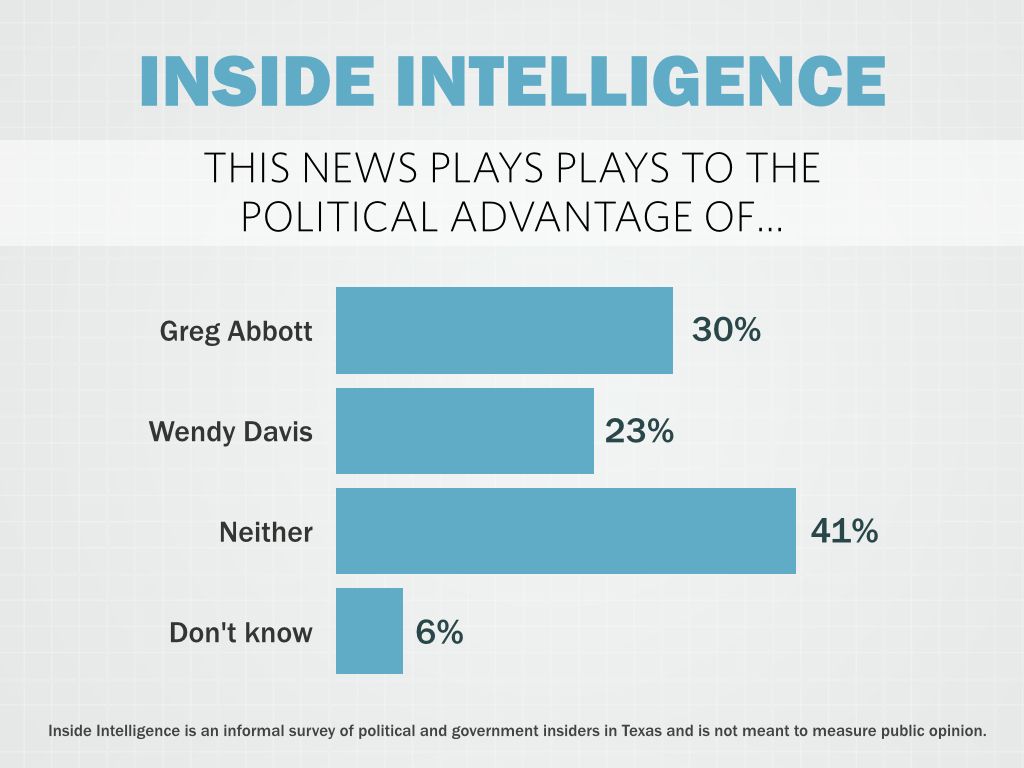 This news plays to the political advantage of...

• "I don't perceive many 'undecideds' in this race. Unless some of the Rs decide to make this a huge issue, it goes away quietly."

• "Tried to select both. It helps each with their base."

• "Again, another reminder of an issue that does not help outside of the base."

• "This is just a straight up pity pitch--out of desperation."

• "Don't forget, there are lots of women who have gone through what Wendy went through, who might now pay a little more attention."

• "This information will put the minds of some voters, particularly women, at ease and plays to Senator Davis' advantage. Beyond that, this also plays well to her professional advantage as she ponders December 2014 and beyond."

• "Davis might improve her standing by concentrating on education and other equality issues -- not by focusing attention on social issues."

• "The goal is to force Abbott to address women's issues in closing weeks. We don't know how that will play out" 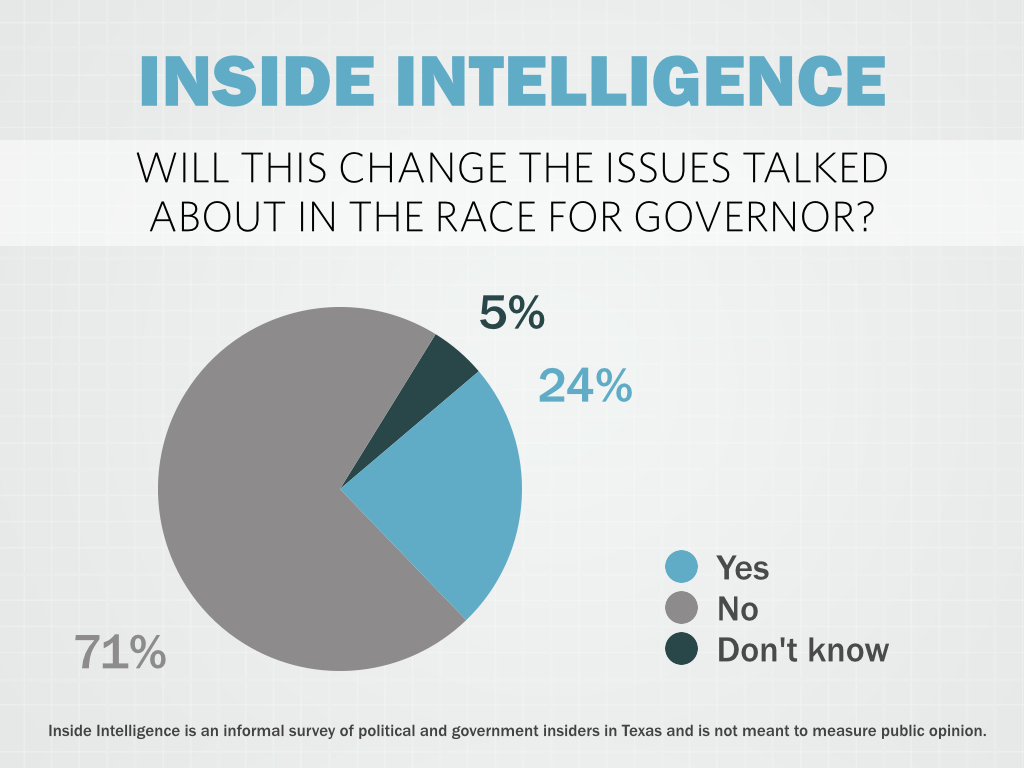 Will this alter the subject matter of the governor’s race — the issues the candidates choose to emphasize and to avoid?

• "Davis capitalized on her pro-abortion filibuster. Then she tries to distance herself from it, claiming she's kind of pro-life, and now she's trying to gain sympathetic votes from women who've maybe had similar abortions. Seems clear she loves the issue, politically. It's an issue that energizes the Dem base and plays into the alleged 'war of women' narrative the White House and DNC are pushing."

• "In September? No. Abbott will let her champion abortion and let her attack with a convoluted message from week to week that drives up her own negatives. He will continue to build his positives with his ads until he attacks he and drives her negatives even higher."

• "Mainly, the race is about the direction of the state and the skill and experience to lead the state. Abbott will win by a big margin. All distractions from Davis do nothing much to that basic situation." 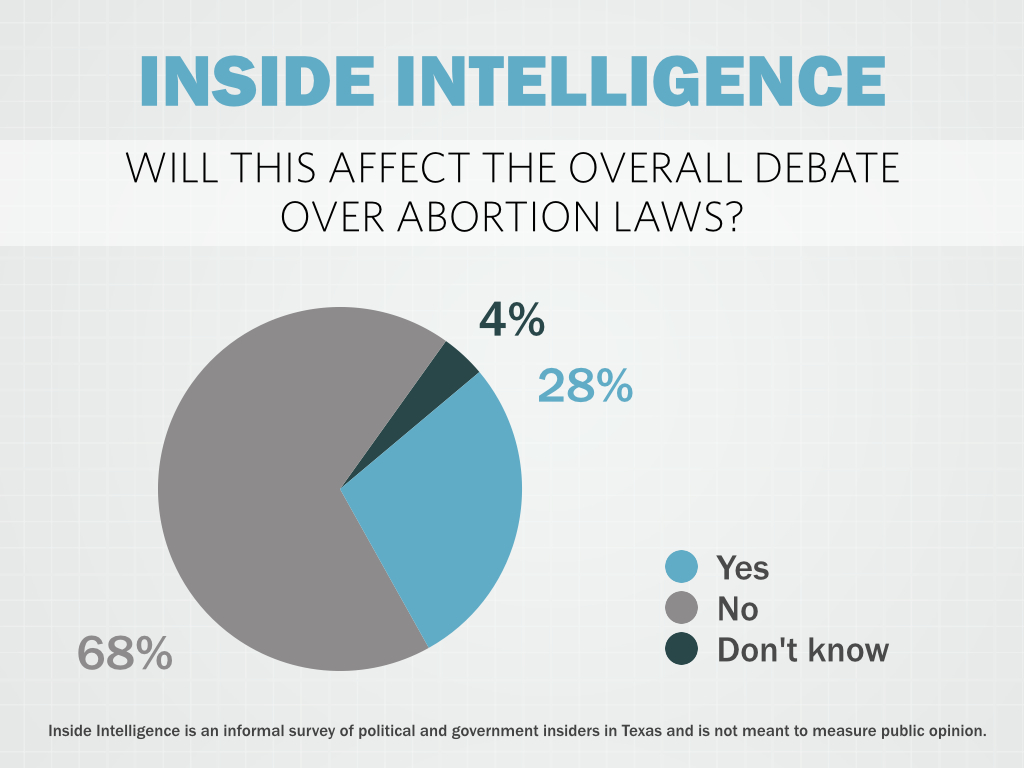 Governor's race aside, will this influence the political debate over abortions and reproductive rights in Texas in any way?

• "Many women out there have things in their past of which their husbands, boyfriends, families, etc. are unaware. When those women walk into the voting booth - ALONE - they will vote for the person with whom they hold the most in common!"

• "The abortion of the abnormal development fetus raises red flags for most folks. It's almost a slippery slope for selective abortions--if it's OK to abort a fetus because its development will make your life harder, what about a fetus with an extra chromosome? What if the fetus is genetically predisposed to certain diseases? What if it's a boy and you *really* wanted a girl (see e.g., China)? Most Texans are against these types of abortions."

• "I hope the far right will realize there are many more reasons to get an abortion than the inconvenience of carrying a fetus to term. Not holding out a lot of hope though."

• "Not this cycle, unless every Swing R loses because of this single issue. Which is highly unlikely."

• "Governor's race aside, what has changed?"

• "Absolutely. No family wants to face the decisions Wendy made, and everyone will want to hear why she and her partner made those choices."