With state district Judge John Dietz’s decision that the state’s public school finance scheme is unconstitutional, we asked our politics and government insiders how this will play forward.

The courts are not through with this, of course, and 39 percent of the insiders think the Texas Supreme Court will overturn Dietz’s ruling. A narrow majority don’t think that will happen.

The insiders are more certain about timing, with 63 percent predicting the high court will not rule before the end of next year’s regular legislative session. About as many — 62 percent — said that the Legislature will not rewrite the school finance formulas while they’re waiting for the courts to rule.

And almost everybody — 91 percent — said the state’s school finance system needs to be reworked.

We collected verbatim responses along the way and a full set of those is attached. Here’s a sampling: 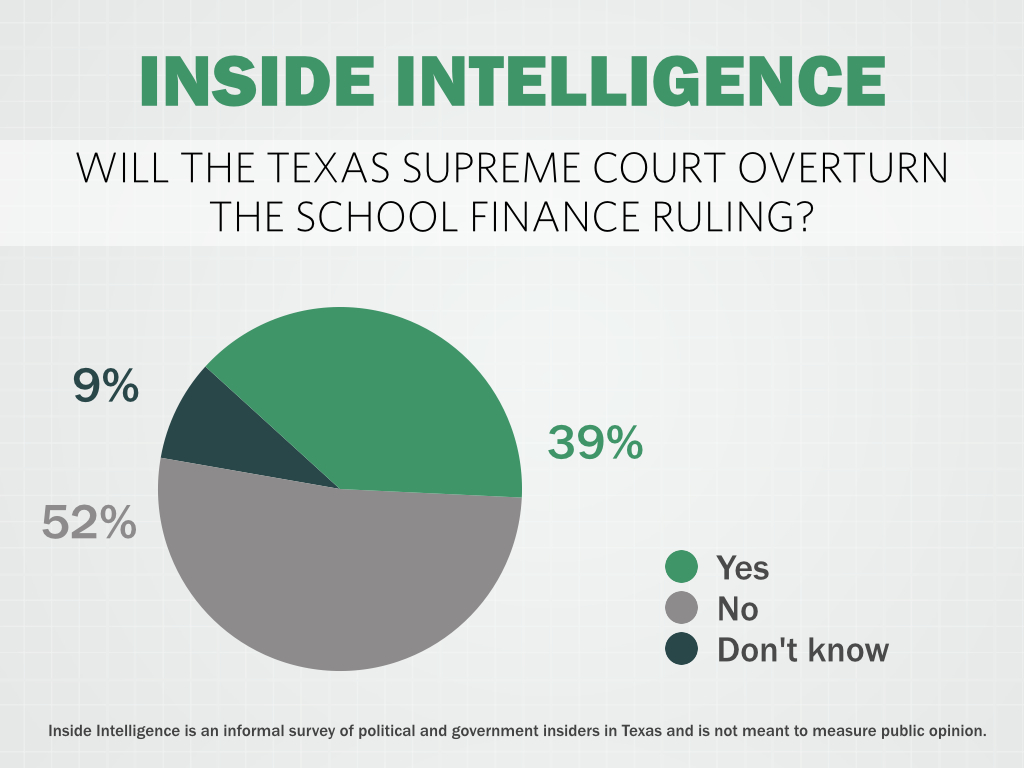 Do you think the Texas Supreme Court will overturn the district judge’s opinion that the state’s school finance system is unconstitutional?

• "The Supreme Court has never accepted the lower court's decisions at whole-cloth on this issue in the past, why would it start now?"

• "Until we change our constitution, we'll be doing this about every 20 years or so."

• "The question is too broad. It may overturn some elements and affirm others."

• "They'll split the baby--uphold part (that the current funding is a de-facto state property tax) and overrule part (the way money is distributed)."

• "Do you really think a Republican Supreme Court is going to allow a Democratic state judge embarrass a Republican legislature?"

• "As long as the Supremes follow their own precedent, there's no way the current school-finance system can survive."

• "Most of it will be overturned."

• "The equity argument can't be won by the state. The numbers are just so out of whack from district to district that it can't be justified. The other two arguments: that the system constitutes a statewide property tax and that the system is financially 'inadequate' CAN be won by the state. Of course, all it takes is for the state to lose any one of the three and we're back at war. Taxpayers, beware."

• "Of course not. The school finance system is always unconstitutional." 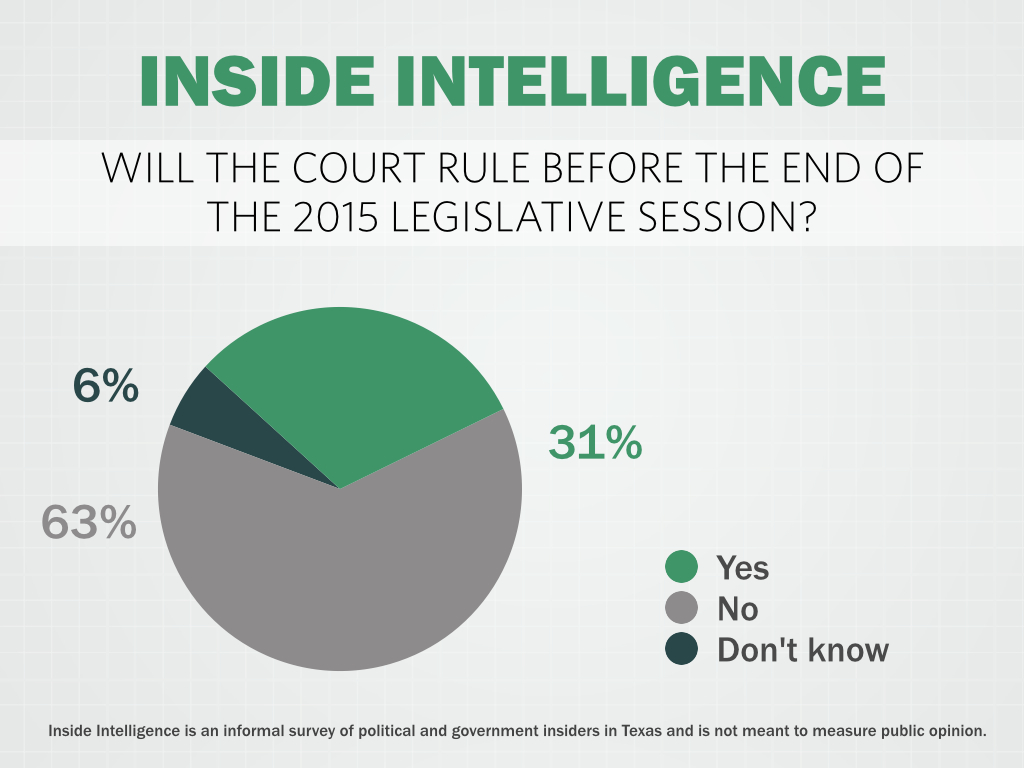 Do you think the high court will consider the case before the 2015 legislative session is over?

• "The 2015 session is irrelevant to the Court in arriving at its decision. The key will be how long it takes them to achieve a majority."

• "I think it's to Abbott's advantage to fast play this ... he's going to have to give more $ to schools. May as well get it over with, then go super hard right through the 2018 primary."

• "The Leg. Tried that approach last session, adding billions of dollars to public school funding. Made no difference to the district judge."

• "Special session, baby!! With new leadership in the West and South wings in the Capitol, the last thing they want is to have to deal with school finance during their first few months in office. They'll want some time for them and their lieutenants to craft a solution."

• "But maybe not rule until after the session. I would assume that these elected and political Justices understand that their ruling has the potential to dominate a session."

• "What's the rush? So Abbott can sign a tax bill in his first year as governor?!" 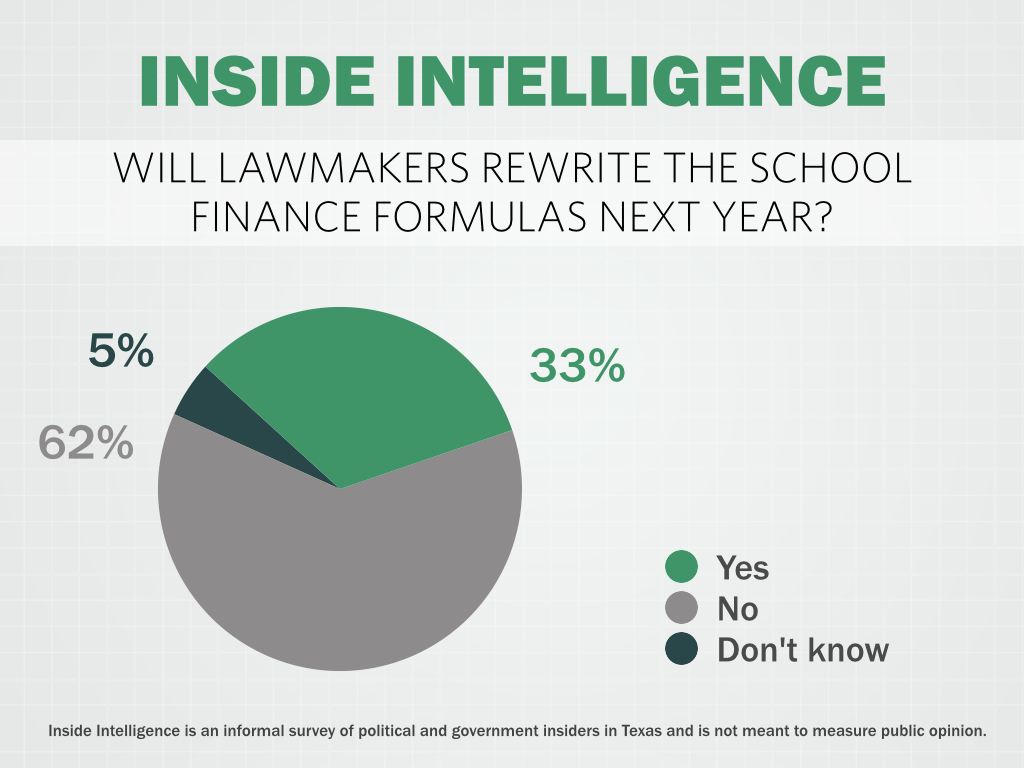 Do you think the Legislature will rewrite the state’s school finance formulas next session?

• "I would guess some band aids are issued this session but a fundamental rewrite won't take place until after the courts are done."

• "They don't have a choice. TAB's membership is tired of not finding an educated workforce in Texas. Fix it now or watch an exodus of businesses heading west."

• "Have they ever re-written the formulas without a supreme court order?"

• "The Lege won't act until they have to. In any case, a special session is probably the best way to deal with school-finance, so there is time to focus on the issues."

• "There needs to be some tinkering, just for strategic purposes, so that when the Supremes look at the case, they will be ruling on a system that is different from that which Dietz ruled on."

• "I think they will wait until the SC issues its decision. They need the finality of that decision for the political cover required to do the right things."

• "They won't do a thing until the Supreme Court says exactly what the constitutional problems are. It's hard enough taking a vote to increase spending; nobody wants to do it when the vote may not solve the problem." 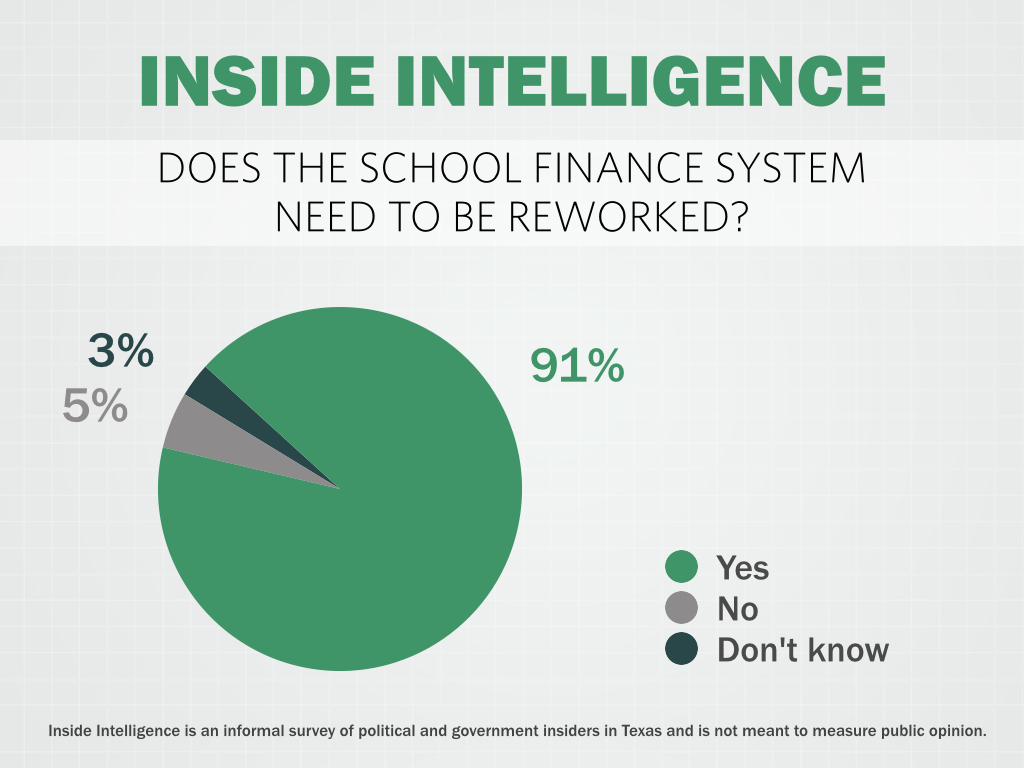 Do you think the state’s school finance system needs to be reworked, or should the courts and the legislature leave it alone?

• "The system definitely should be reworked since the system currently doesn't work."

• "Do away with local funding of schools all together. The system will always be askew when local districts can make a local financial effort."

• "The better question is: should the constitution be amended so that local districts can address their own destiny without relying on aid from other districts (i.e. - robin hood)"

• "Totally reworked so that the state pays its fair share instead of local property taxpayers and so that it is equitable among all school districts. Like -- how about an income tax, folks?"

• "Something has to stop the litigious cycle. Perhaps passing a constitutional amendment re-instating the statewide property tax."

• "It's ok basically as-is. Not perfect, but then, what system is? Tinker a little and go home."

• "Face the music and it is time to revamp this system. Should be interesting to see the new crop deal with that."