Bypassed by the Miracle

Bypassed by the Miracle is a weeklong series on the people and communities that have missed out on Texas' economic success or are finding that it comes at a price. You can also read our related Falling Behind and Hurting For Work series.

In 1994, the Leander school district had 7,200 students and was growing fast. To handle the hundreds of additional students expected in the coming year, the Central Texas district embarked on a building binge, including the construction of its sixth and seventh elementary schools.

Twenty years later, the district remains one of the most popular destinations for students in Texas. Enrollment has more than quintupled to 36,750 and is projected to top 50,000 by 2023. The district now has 24 elementary schools and, officials say, needs at least five more.

“We’re growing by 1,000 to 1,200 children every year, which, if you think about it, is pretty much a middle school every year, or an elementary school and a half, or half a high school,” the assistant superintendent for business and operations, Ellen Skoviera, said.

Handling this growth is not cheap. Leander has $1.7 billion of debt, more than would normally be allowed under state law. To get around the limit on debt, Leander and other districts have relied heavily on a controversial financing tool called capital appreciation bonds. Their upside: No payments are required for years, even decades. Their downside: They cost more and may saddle taxpayers with a massive IOU far into the future.

“It’s getting the benefits now, but not making any kind of sacrifice,” state Sen. Juan "Chuy" Hinojosa, D-McAllen, a critic of the bonds, said. “It is bad public policy to commit that kind of debt to future generations. It’s speculation.”

The difference between more traditional bonds and capital appreciation bonds is principally about timing. With a traditional bond, a local government can borrow money, then pay off the principal and interest in installments until the debt is retired. With a capital appreciation bond, installment payments are not required for the duration of the bond. The district must, however, pay the entire principal plus years of compounded interest when the bond reaches maturity in 30 or 40 years. The avoidance of installment payments comes at the cost of higher interest, potentially as much as 10 times the amount borrowed compared with a traditional bond, according to public finance officials.

“Meryl votes it in today, and then Tom, Dick and Harry comes in and, boy, are they in for a surprise,” Comptroller Susan Combs said, explaining her dislike of the bonds.

School districts that have used capital appreciation bonds say they are hamstrung by what is known as the “50-cent test” — a state law that limits the amount of property taxes districts can assess to cover debt service costs to 50 cents per $100 of assessed value. By pushing required payments far into the future, capital appreciation bonds allow districts at or near the cap to issue more debt without having to increase their tax rates.

“I think if the 50-cent limit wasn’t there, we could have found some alternative routes,” said Michele Trongaard, chief financial officer of the Wylie school district, which issued $79.4 million in CAB debt in the 2013 fiscal year, more than any other Texas school district that year, according to state records. The North Texas district’s tax rate is $1.64, with 47 cents tied to debt service, very near the state cap.

Public entities in Texas have used the bonds for decades, often to refinance existing debt and avoid abrupt spikes in the tax rate. But in recent years, critics have raised concerns as some fast-growing school districts have used the bonds to sidestep the 50-cent test and sharply increase their overall debt.

“We do have a small number of districts where CABs have become a large portion of their debt portfolio, and that’s pretty much because of the 50-cent debt test,” said Michelle Smith, executive director of the Fast Growth School Coalition.

Leander has issued more debt through capital appreciation bonds than any other Texas school district in the last decade. It’s also become the most vocal defender of CABs as prudent fiscal policy for fast-growth districts, though that role has come a bit reluctantly.

“We don’t want to be known as the district with debt,” Skoviera said. “We’ve always been known for our academic excellence, and that’s why people come here.”

The district began using the bonds more aggressively in the 1990s, when enrollment began to soar, fueled by Leander’s proximity to Austin and its abundance of land available for development.

Because of the rising enrollment, Leander is using 39 temporary classrooms, also known as portables. Without the capital appreciation bonds as a financing tool, the number of portables would be much higher, Skoviera said. 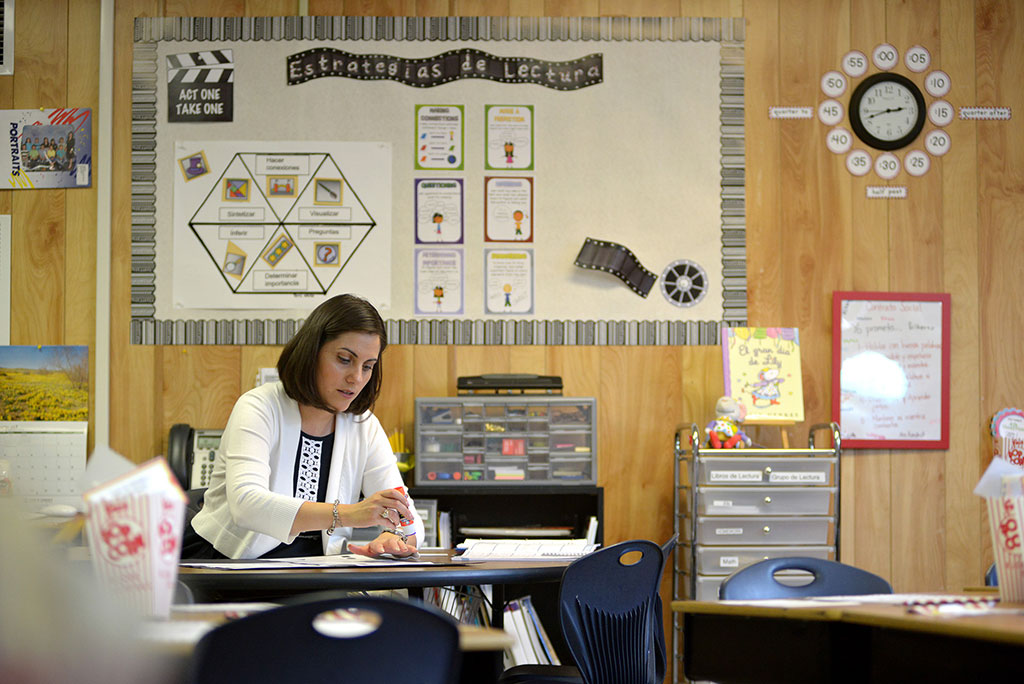 “What CABs do is they give you an ability to direct when your payments are made so you can control your tax rate and ensure you can build within 50 cents,” Skoviera said. Last year, Fitch Ratings downgraded the school district’s credit rating to AA-, in part because of its heavy use of capital appreciation bonds, though it still classified the district as a low credit risk. Fitch chose to maintain that rating in May, and noted that it considered the district’s debt level “very high” and that “capital needs remain significant” given the district’s fast growth.

Some of Leander’s CAB-related debt does not require a payment for nearly 30 years, but the district plans to pay off much of it well before those bonds mature, Skoviera said. While the district will ultimately pay more than if it had used more traditional bonds, it will not pay interest anywhere near 10 times the amount borrowed, as some critics have claimed. In a worst-case scenario, she said, the district would end up paying $3.7 billion to pay off its $1.7 billion in debt.

A bill to rein in the use of the bonds in Texas passed the Senate last year, but failed in the House. Hinojosa, the bill’s Senate author, said he would bring up the issue again next year, but also wanted to tweak the 50-cent test to make it easier for fast-growing districts to address their needs.

“We need to look and research other ways to provide them with public financing tools so they can build capacity and handle the growth in population,” Hinojosa said. “But certainly CABs are not the answer.”

James Quintero, director of the Center for Local Governance at the Texas Public Policy Foundation in Austin, said his organization and other conservative groups would work in the next legislative session to restrict the use of capital appreciation bonds. Fast-growing school districts, like all others in the state, need to live within their means, he said.

“I think schools need to begin looking at their existing resource pools before going to outside sources, especially when they’re tapped out of issuing debt already,” Quintero said. Asked about whether lawmakers should provide any flexibility on the “50-cent test,” he said “I’ll leave that to the Legislature.”

In the meantime, Leander and other school districts will consider issuing more capital appreciation bonds.

The Eagle Mountain-Saginaw school district in Tarrant County is already taxing property for debt service costs at 50 cents per $100 of assessed value, the most allowed under state law. Though the district’s property tax revenue has increased recently, it has not kept up with the rising number of students, said James Schiele, the district’s chief financial officer.

“Basically our problem was for five years, our taxable assessed values were absolutely stagnant and at that time we had a growth of 2,000 kids,” Schiele said.

He said the district’s options were to increase class sizes, install more portables or issue capital appreciation bonds. The school board was likely to choose bigger classes, he added.

“It’s the choice of death by firing squad or death by electrocution,” Schiele said. “The bottom line is, if you put people in an insane situation, don’t expect rational decisions.”

Disclosure: The Fast Growth School Coalition is a corporate sponsor of The Texas Tribune. A complete list of Texas Tribune donors and sponsors can be viewed here.