Gov. Rick Perry’s indictments have renewed questions about the public integrity unit of the Travis County district attorney’s office, whether the state should fund it and where, if lawmakers decided to move it, to put it.

Our insiders in politics and government started with the current operation. Asked what politicians are most likely to be prosecuted in the state’s capital city, 37 percent chose “lawbreakers” and 36 percent chose “Republicans.” Only 1 percent answered “Democrats”; about one in four said the hammer tends to fall on whoever is in office.

A slight majority — 52 percent — said the PIU should be moved out of the local DA’s office. Another 41 percent would leave it there.

The insiders’ top relocation spot would be with an appointed prosecutor, followed by the attorney general; only a handful would assign those duties to another elected prosecutor or the state auditor.

Finally, we asked whether any of the state’s local prosecutors — county and district attorneys — ought to be allowed to jump into state cases as they find them: 76 percent of the insiders don’t think that is a good idea. 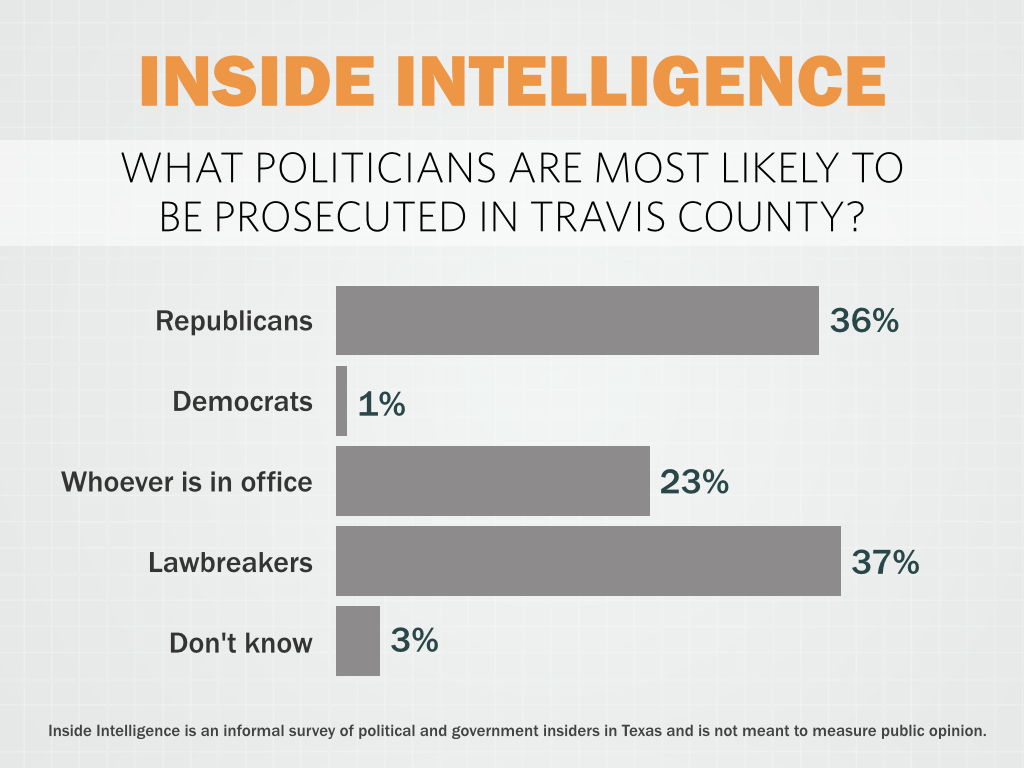 What politicians do you think are most likely to be prosecuted in Travis County?

• "The Travis County DA no longer operates independently; Ronnie Earle did whether we like to admit it or not. Those in control of the Democrat Party controls the DA, and they will go after anyone they cannot beat at the ballot box or their own kin who are not 'pure' enough."

• "It appears that there is definite political element in the Travis County. Past prosecutions against some democrats, such as Jim Mattox, seem to have been motived more by politics than the law."

• "Or those with questionable behavior. Over the years, it has been a fairly balanced partisan pursuit."

• "Let's see the list of high profile cases brought by the PIU: Perry, Delay, Hutchison...oh, here's a case involving a D...Gib Lewis...but that was last century."

• "Whoever is in a leadership position. Flexing your political muscle when you're in charge is more likely to garner prosecutorial attention, than throwing punches from the peanut gallery." 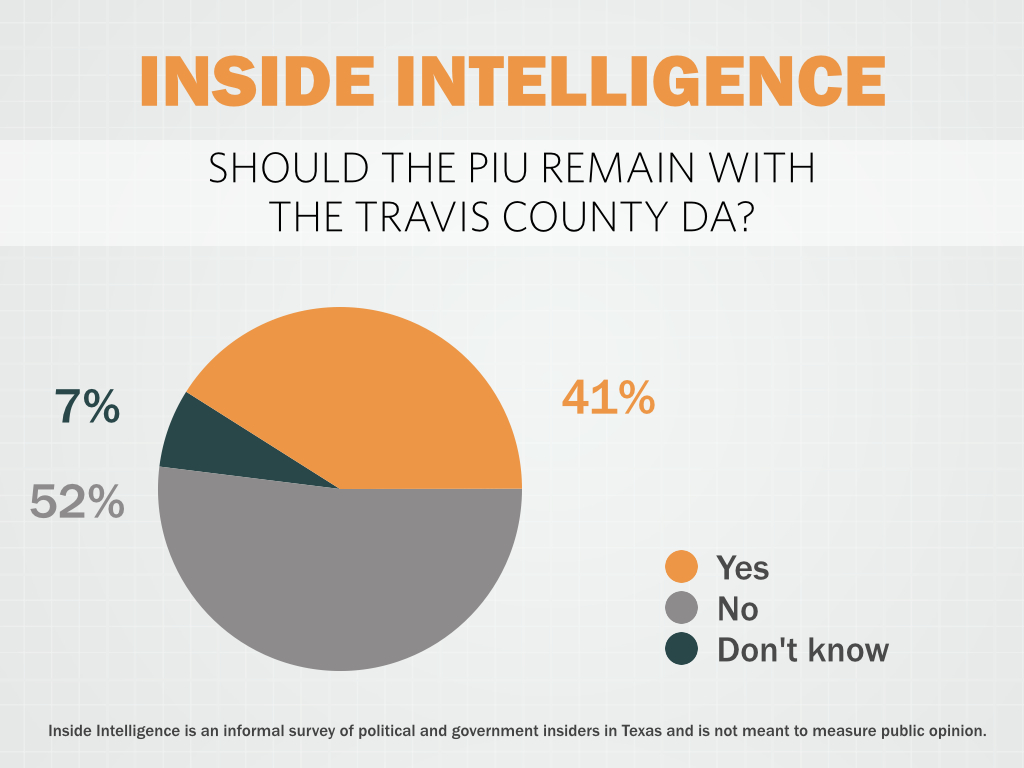 Should the public integrity unit remain in the Travis County District Attorney’s office?

• "Vesting the PIU with the Travis County DA has been a bad idea for 30 years. It needs to be moved or dismantled."

• "Need some entity to prosecute certain crimes statewide. It should be in Austin as the seat of government. The question as to whether the current placement of that activity is unnecessarily political. Not sure that any of the options would improve that. The PI unit has to sort through 1000s of complaints that are overtly political or vengeful and (as does the Travis co attorney). Fortunately they use good judgment to not prosecute most of these just to get headlines."

• "If they are concerned about political prosecutions the last thing they want is the AG or the Ethics Commission taking over the PIU..."

• "Anywhere it goes, it will be political. If it moved to Attorney General, it would lean partisan to the party that held that office. Unless it is moved to the Texas Rangers, there are just not good alternatives."

• "Yes, because there's nowhere else that is any better. Why should politicians and government workers get treated differently from any other defendant? Hard to pass the smell test when arguing you deserve special treatment."

• "There is a reason the office is outside state government. It never works to have the fox watch the hen house."

• "Ideally, it needs to be with a separate, apolitical, stand-alone entity." 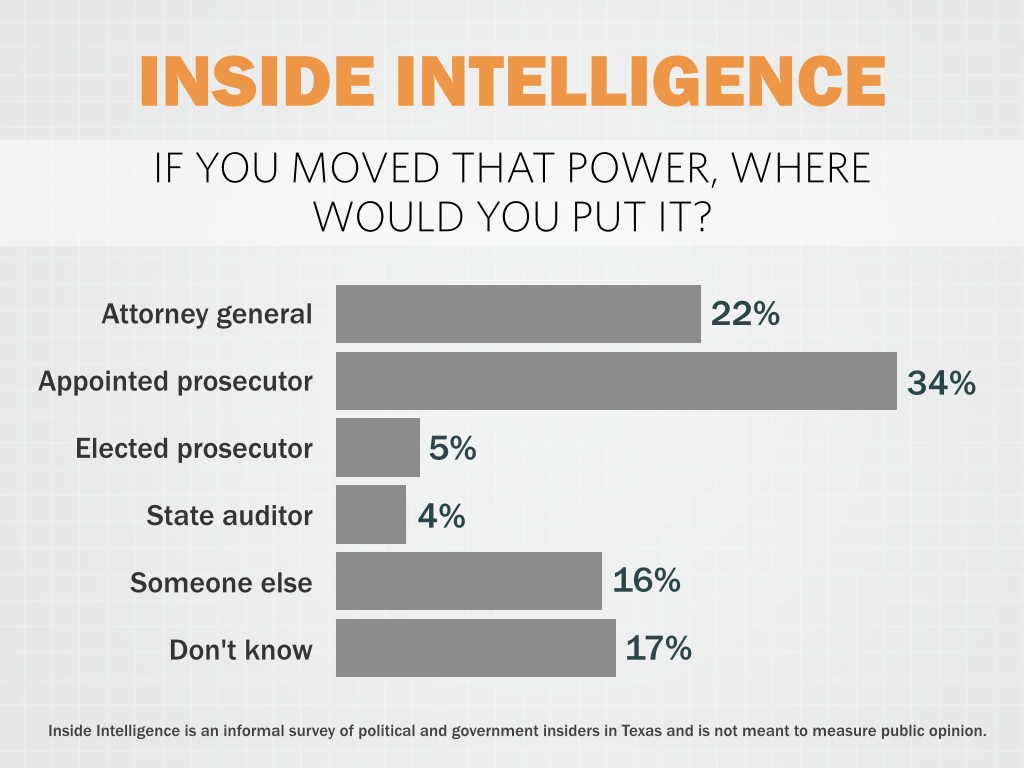 If you moved the public integrity unit, where would you put the power to prosecute state officials suspected of breaking the law?

• "We need a system where the AG undertakes the investigation and then refers it to the local DAs for indictment and prosecution."

• "Texas Rangers - handed to an independent prosecutor selected by a bi-partisan panel."

• "The Travis County option may not be ideal but none of the other options are any better. Giving it to the AG instantly makes him/her the most powerful person in state gov't, and what legislator/governor wants that? Nor do smart AGs want it--it's nothing but a headache for someone looking to run for higher office. And look at the feds--no R wants Eric Holder prosecuting them, but Congress' independent counsel law was a mistake b/c it was unaccountable and too expensive. Travis County is probably the least worst option."

• "This question illuminates the problem with having it anywhere in state government. As in the current high profile case, special prosecutors are already used in certain events."

• "No matter where it goes, politics will be in play. Sending to the AG's office or having an independent elected prosecutor are the worst ideas, because it becomes even more likely that politics play a role." 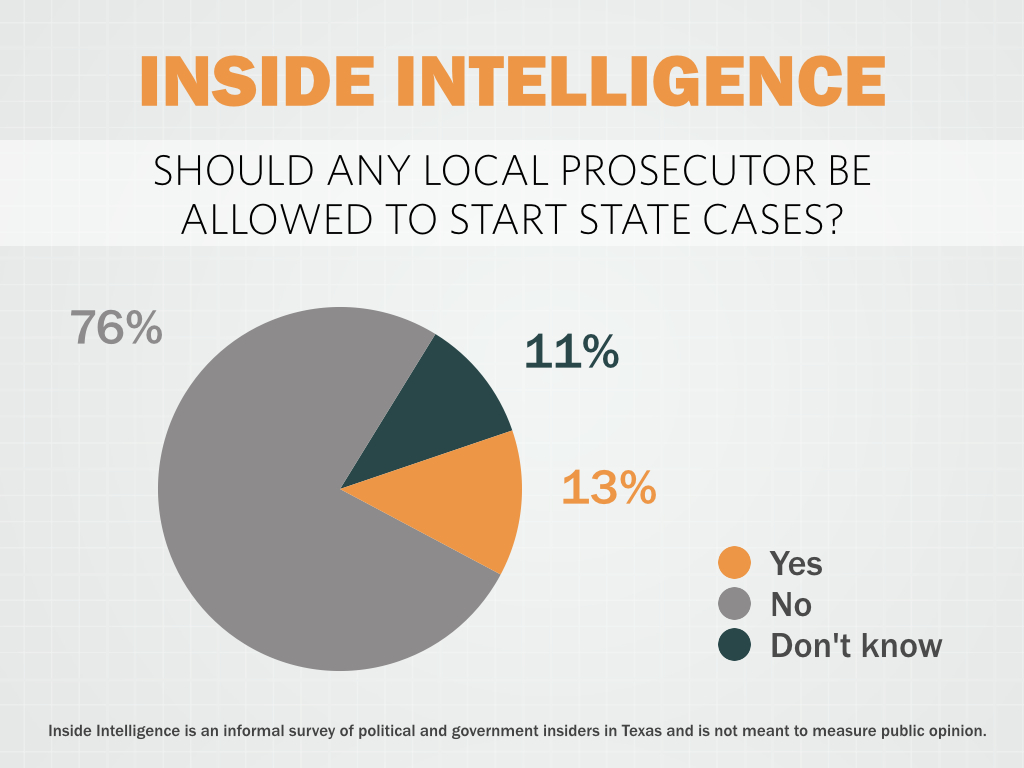 Should any local prosecutor in Texas be allowed to jump into statewide prosecutions — effectively giving them the same power Travis County has today?

• "In a perfect world this would be the ideal situation, but what local prosecutor is actually going to spend what limited finds they have to go after a much more powerful politician."

• "The local prosecutor would become the most coveted and powerful position in the state. Both parties would use it to punish their enemies."

• "Is anyone really suggesting that, for example, the DA out in Loving County should be able to prosecute statewide elected officials? Constitutional and statutory issues aside, most DAs don't have the resources, expertise, or legal acumen to do what you appear to suggest."

• "Local prosecutors could use the power to make a name for themselves and use it as a springboard to run for statewide office."

• "But Travis County doesn't have 'statewide prosecution' power except for insurance fraud, motor fuels tax, and some environmental crimes. It prosecutes politicians who have done their deeds in Travis County. Jurisdiction goes with geography. Changing that would be a mess."

• "There is some wisdom in having a centralized focus for ethics policing."