STRATHAM, N.H. – Gov. Rick Perry has not shied away from addressing his indictment for coercion and abuse of power since news of it broke last week. He has attacked its premise and called it a politically motivated “farce.”

At Republican gatherings in this crucial primary state, where Perry is testing public opinion ahead of a possible presidential run, it was hard to find folks who disagreed with his take on the charges. And some wore that viewpoint – literally.

That’s because RickPAC, the governor’s political action committee, handed out free veto-related T-shirts (the shirts run $25 online). The front features Perry’s mug shot and says he is “wanted” for “securing the border and defeating Democrats.” The back shows the unflattering mug shot snapped of Travis County District Attorney Rosemary Lehmberg following her arrest for drunken driving. The shirt says she is “guilty” of “driving while intoxicated and perversion of justice.”

Several folks asked Perry to sign the T-shirts, and he obliged with a grin.

RickPAC also handed out veto-related bumper stickers that say “#IStandWithRickPerry,” a nod to the Twitter hashtag the governor’s supporters have used following the indictment.

The wide visibility of that swag shows just how quickly Perry’s backers – in an ironic twist – have sought to exploit his legal troubles to boost his political profile. 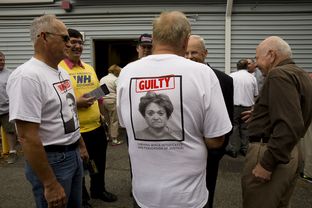 Perry was booked this week on felony charges related to his threat to veto $7.5 million in state funds for the public integrity unit of the Travis County district attorney's office. Perry wanted Lehmberg to resign following her drunken driving arrest and conviction. She declined and he followed through on the veto, keeping $7.5 million from the state public corruption unit that is a part of the Lehmberg's office.

“The Travis County district attorney accused Rick Perry of doing something guaranteed under the constitution,” John Sununu, a former New Hampshire governor and chief of staff to George H.W. Bush, said Saturday at a Republican rally in this small town along the Squamscott River. “If the Hillary Clintons of the world don’t condemn it, they’re disqualified from being a chief executive.”

Standing next to her husband, Bill, at the Stratham event, Linda Beyer, a self-described “Fox News junkie,” said, “We absolutely support the governor in his stand.”

Though Perry’s indictment has clearly boosted his national profile at the moment, some political experts caution that Perry could emerge from a trial looking worse – depending on what details emerge.

“It certainly could be a longer-term detriment that really derails his quest for a nomination in the Republican Party,” Cal Jillson, a political science professor at Southern Methodist University, told The Texas Tribune last week.

Disclosure: Southern Methodist University is a corporate sponsor of The Texas Tribune. A complete list of Texas Tribune donors and sponsors can be viewed here.