Gov. Rick Perry was indicted on two counts last week, accused of coercion of a public servant and misuse of official capacity. He responded by saying he does not think Travis County District Attorney Rosemary Lehmberg should still be in office and that he vetoed state funding for her operation because of it — and would do it again. He has hired a handful of well-credentialed lawyers and the legal and political battle is joined.

So we asked our insiders in politics and government about it.

A slight majority, 54 percent, said they do not believe the governor broke the law, and 57 percent said they think the indictment itself — the product of a special prosecutor and a Travis County grand jury — was politically motivated.

Half of the insiders think the indictment will hurt Perry’s shot at the 2016 Republican presidential nomination, while 27 percent think it will help, and 18 percent said it will have no effect.

Most — 70 percent — said Perry’s attempt to replace Lehmberg was politically motivated, and the insiders were split on the question of whether he hoped to replace her with a more sympathetic prosecutor.

We collected verbatim comments along the way, and a full set of those is attached. Here’s a sampling: 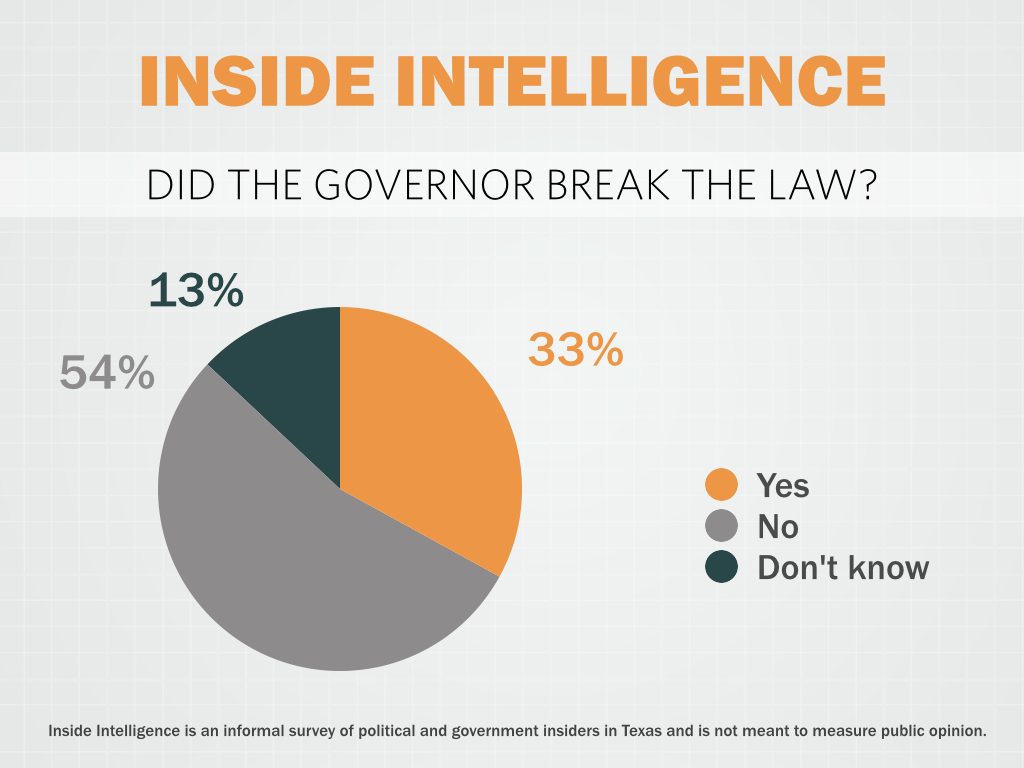 Do you think Gov. Rick Perry broke the law during his effort to unseat Travis County District Attorney Rosemary Lehmberg?

• "If you're under investigation, it's illegal to eliminate your investigator - even if she's a drunken fool."

• "The law is a technical business and while McCrum thinks that in some sense Perry violated the law, this is where prosecutorial discretion, good judgment, and common sense are supposed to come in."

• "Not a lawyer, but having a hard time figuring out how he did anything other than what he said he would do, and then exercising his right to line item veto . . . and why that would be illegal?"

• "If he broke the law there are hundreds of people in every legislative body around the country, local, state and federal who should all be indicted."

• "Did not hear the evidence. Grand jury apparently thought so"

• "We EXPECT the governor to VETO taxpayer wastes. Let's also call out the Republicans who refused to move the public integrity unit to the AG's office."

• "The only crime here was Rosemary Lehmberg's embarrassing DWI. The only abuse of power here were Lehmberg's threats of retribution against the peace officers who arrested, detained, and restrained her."

• "You can neither promise to give or withhold a public benefit in exchange for legislative action. This was a quid pro quo---'you resign and I will fund the division'."

• "Absolutely not. This indictment says it is illegal to communicate on how to avoid a veto."

• "Ridiculous misuse of criminal law...and all by people who resent Republican consideration of the impeachment of Obama. To all who play this game: stop it!!" 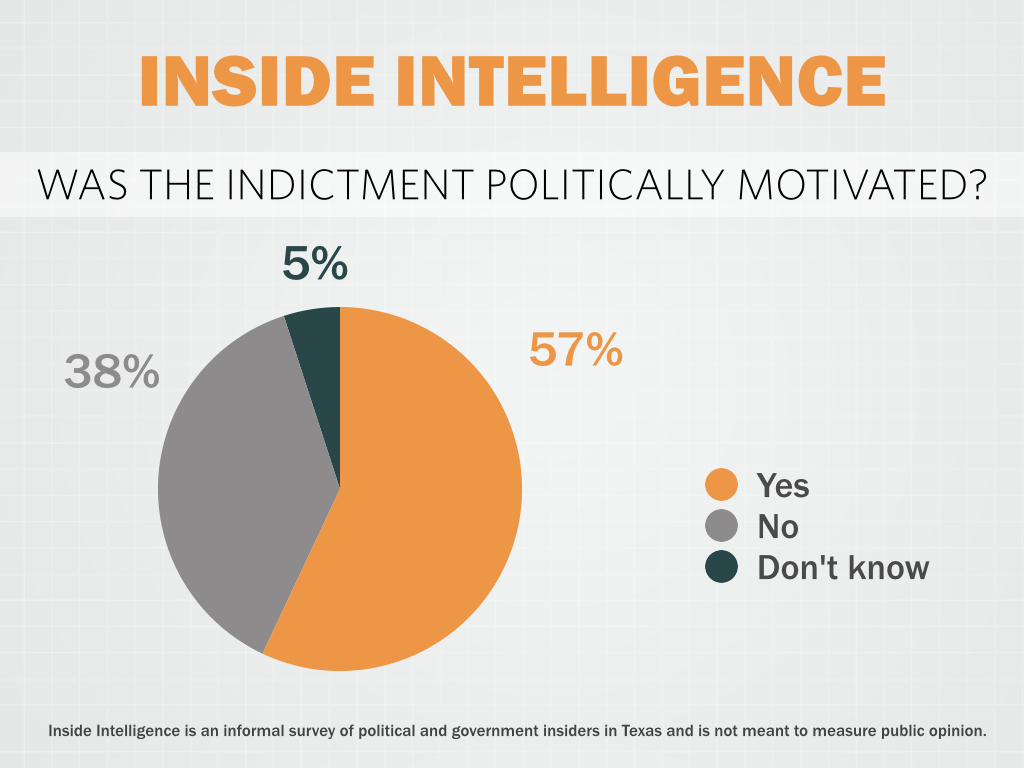 Do you think the indictment itself was politically motivated?

• "Since when are political motivations and fact mutually exclusive?"

• "Another case of a special prosecutor running amuck. This is why special prosecutors have become so rare in Washington.... once they're appointed, they're determined to find some violation or another and keep the gravy train rolling."

• "Certainly the initiation of the indictment was politically motivated. As for the Special Prosecutor, he is either grossly misguided in his review of the law or he is a political pawn...neither is good."

• "Every aspect of this situation, the veto, the threat to restore funding, the complaint, the empaneling of a grand jury, the indictment - it's ALL politics."

• "Probably not. I think it's a weak case, but there's probably an argument to be made. The Grand Jury certainly thought so. Perry's attorney should take it seriously."

• "Yes, it is a 'Travis-ty!' A grand jury in Travis County would indict Rick Perry on any charges brought if there was a legal theory presented and no one arguing the other side." 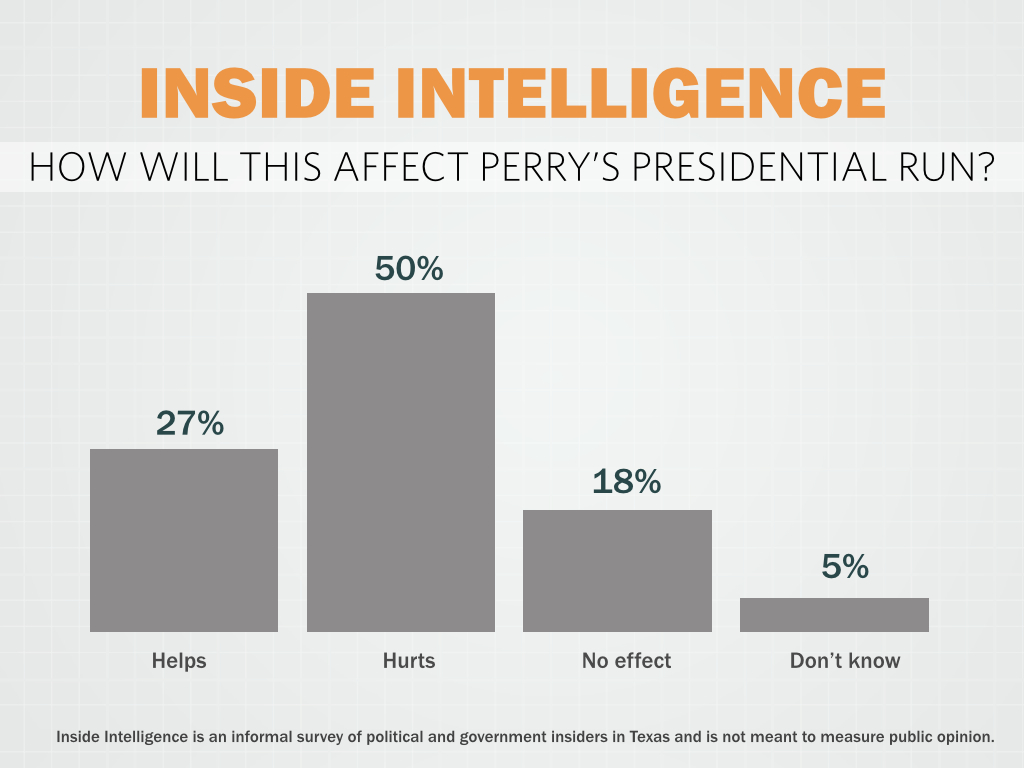 How do you think the indictment will affect his chances in the 2016 presidential race?

• "It'll help in the primaries, but if (God forbid) he were to make it to November, he's be toast."

• "After people see the Lehmberg video, they'll understand why he and rational folks lost confidence in her ability to oversee the PIU. It will help with his fundraising. It will shore up support among the base. And it will help sway swing voters during the general election (should he get the nomination)."

• "Initially, it will rally most Republicans, buying into the pro-Perry rhetoric, but, in the long run, it will be just one more question mark about his judgment on the road to too many. I think he's probably toast with the people who have the money."

• "The charges are so ridiculous that they'll be ignored by most primary voters, and prove an asset to others."

• "It could help if he uses it as a platform to show he was right and stood up in the face of a political assault or a gross misreading of the law."

• "You can indict a ham sandwich. It will be fun to watch how the country as a whole responds to the video of the hapless, arrogant, mean spirited DA really goes viral."

• "We have a new trending hash tag that even Ted Cruz has used. This is clearly a good thing for Governor Perry."

• "He had no chance of being elected before the indictment, and nothing's changed."

• "Hard to run for President when you're in court."

• "It's a loser any way you look at it. The saving grace is the indictment's connection to the 20 plus minutes of belligerent, drunk behavior of the district attorney. Now that's great TV." 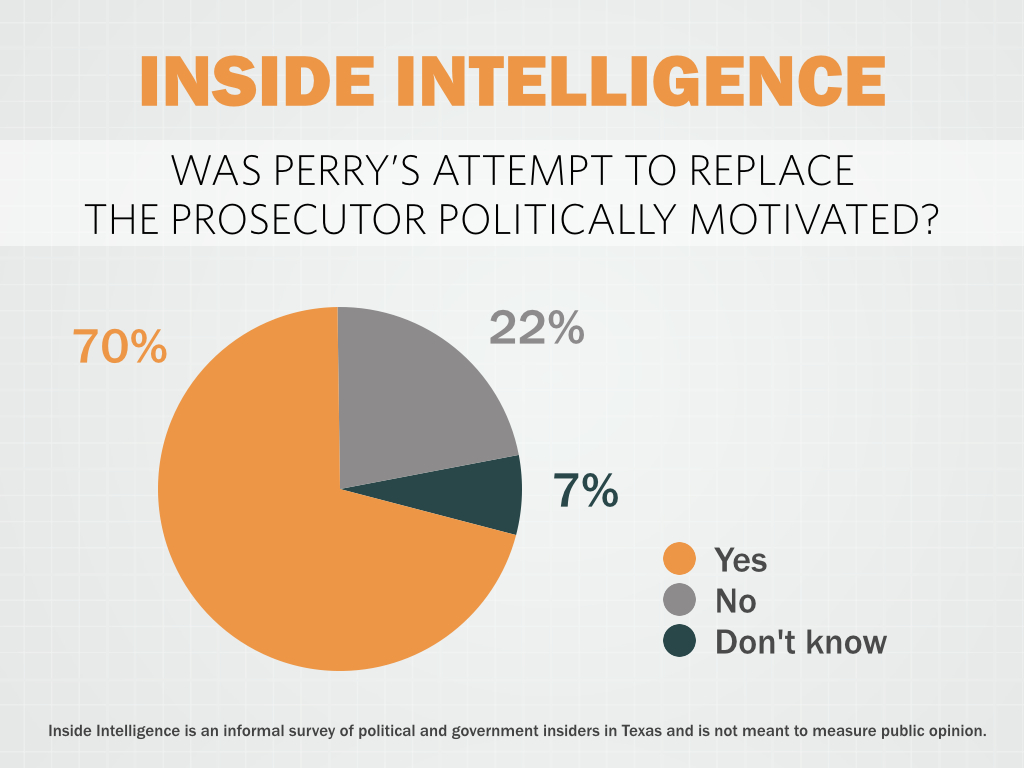 Do you think Perry’s attempt to replace Lehmberg was politically motivated?

• "Not against Lehmberg personally, but the Public Integrity Unit in general. The GOP has been politically motivated for years, even pre-Lehmberg, to dismantle the Unit."

• "Everything has some ting of politics. Lehmberg opened the door for this."

• "Anybody in any other county would have been put out. The video is sickening to watch."

• "I guess if Perry were a Democrat, then it would have been based on principle, right?"

• "If she had not been caught drunk and on video screaming and cursing at police then the vetoing of the funding would have never happened."

• "Of course. Everything a Governor does is politically motivated. That doesn't mean it was a bad thing, or illegal."

• "Sure it was, Lehmberg made herself an easy target in a part of Texas where the Republicans cannot get a foothold. Travis County DA is always a target of Texas state government. Due to location, the office is responsible with investigating all government corruption so there is a watchful eye. For a long time sitting governor with CPRIT, etc. scandals brewing, it would be very convenient to appoint THAT office."

• "Relished, in the way that Don Vito Corleone might have enjoyed it, but not politically motivated. If Lehmberg was a Republican, he would have done the same." 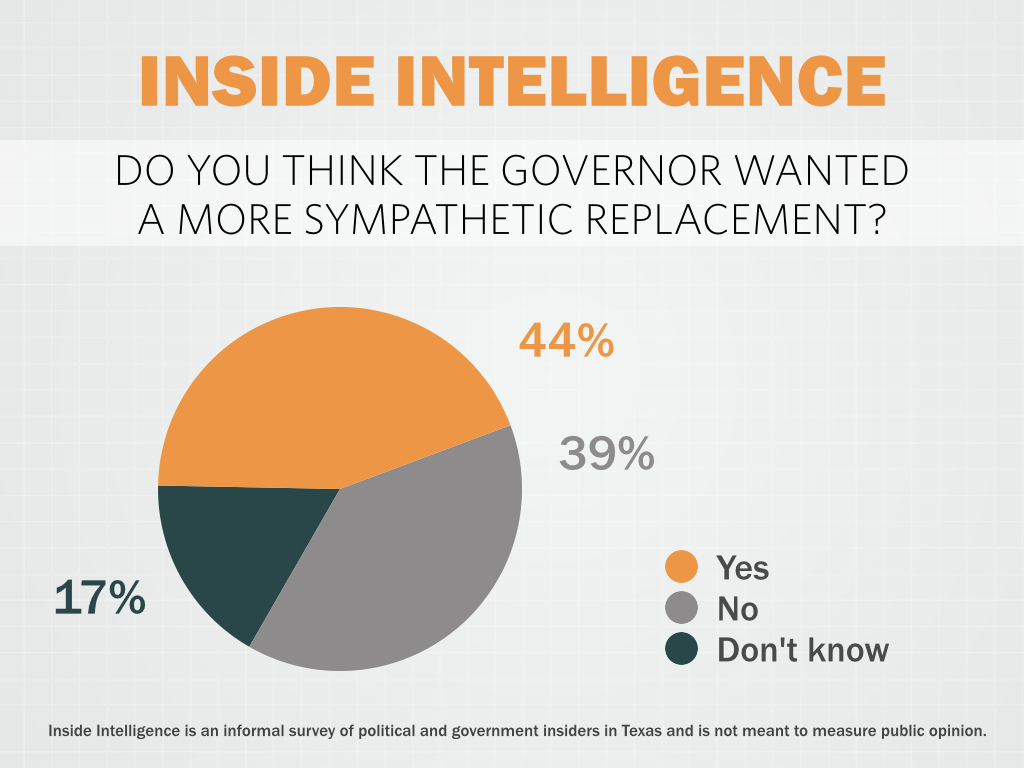 Do you think Perry hoped to replace Lehmberg with a more sympathetic prosecutor?

• "The replacement itself was going to be a political victory."

• "Like any reasonable official, he wants the PIU to actually have integrity and free from political motivation. Move it to the Attorney General's office where it belongs."

• "Maybe a less drunk and abusive one."

• "In Travis County? The Perry appointee would have been there until the end of this year. It's not like a Republican was going to win the next election."

• "This is the million dollar question."

• "Of course! Since when does a governor pick a replacement *less* sympathetic to him?"