Texas voters have been needling some of their political candidates this year about property taxes — and it appears that our insiders in government and politics don’t like the levies anymore than voters do.

Property values used for taxation are not fair, according to two-thirds of the insiders. Homeowners ought to get bigger exemptions, according to 57 percent, and 64 percent think the state would be better off replacing local school property taxes with a uniform state property tax, they said.

We asked for comments along the way and a full set of those is attached. Here’s a sampling: 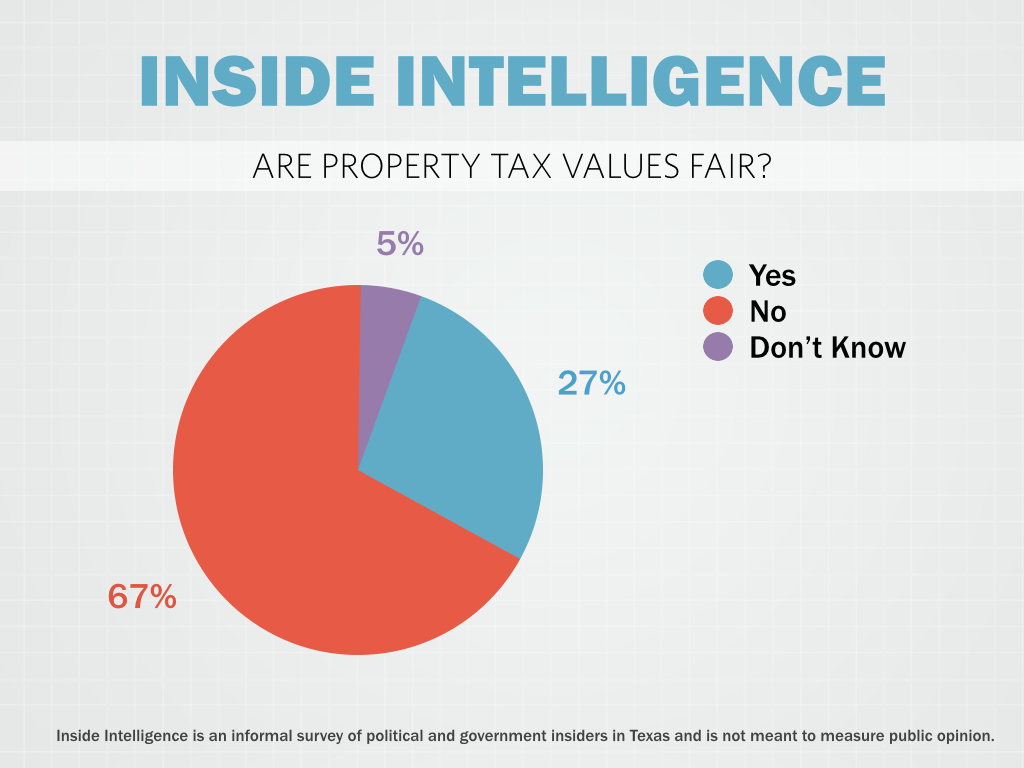 Do you think the property values used for taxation in Texas are fair?

• "California has a better model (mother of all surprises) where appraisal takes place in limited circumstances including change of ownership, decline in values, and new construction. It is hands down better than the annual guessppraisal and property owner objection process that we all go through now."

• "If it was fair, do you think business lobbyists would be so worked up over industrial/commercial property evaluations?"

• "It's not fair for average homeowners to have more of the burden shoved onto them because commercial property and high-dollar homes are not paying their fair share."

• "Well, my house is valued a couple hundred thousand bucks below the market, so maybe I should say no. But based on my tax bill, you bet I think it's fair. If anything, it's valued too high."

• "By fair, do you mean that commercial/industrial gets all the breaks and games the systems while residential owners get screwed?"

• "We have a system in place to try to determine actual values which is as good as any in the country. No system is better than those who administer it, and that can vary among appraisal districts."

• "To be completely fair, sales prices would have to be disclosed." 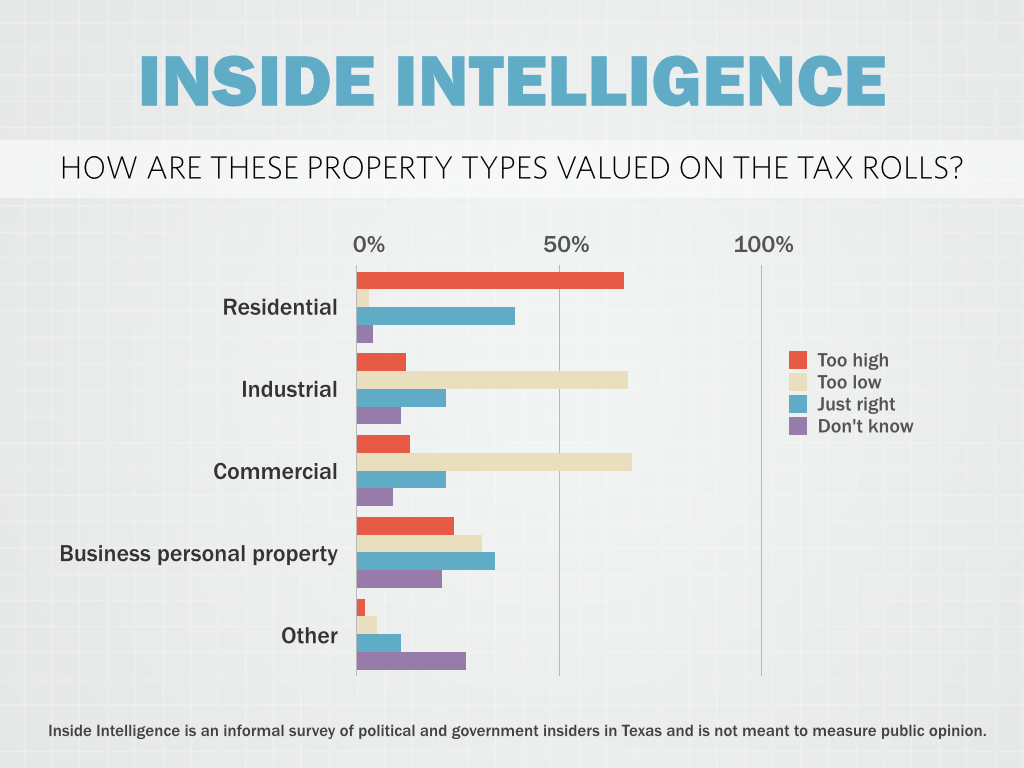 How would you say each of these types of property is valued on the tax rolls, generally speaking?

• "Too high or too low is too simple. The problem Texas has is inequity. There is not an adequate effort to seek uniform property values across the State or even within Appraisal District Boundaries."

• "It's ridiculous that we don't have a law requiring sales price disclosure. Virtually every other state does, and it would end the game of tax assessors trying to ascertain a value without good supporting documentation, and the whole bureaucracy required to address appeals."

• "Question is impossible to answer intelligently. There are over 250 appraisal districts out there and each presents its own facts and situation."

• "Some extremely expensive residential properties are undervalued, and/or take advantage of exemptions that most people don't have (like agricultural use or environmental-protection/natural resources preserve status)."

• "The biggest drivers for homeowner tax bills are increased values (although those increases are capped at 105), over reliance by the state on property taxes, and increased local spending. To blame those increases on undervaluation of other properties is unsupported by the facts."

• "Exclusive country clubs are a good example of commercial/business personal property, depending on its ownership and tax structure, that are dramatically undervalued on tax rolls."

• "Commercial property owners can hire lawyers to game the system. It's way out of whack."

• "Property taxes are horrible. Income and consumption taxes are much better. We should tax income, from the first dollar without exemptions or deductions, and we could replace all of the property taxes in this state with less than 3% on income." 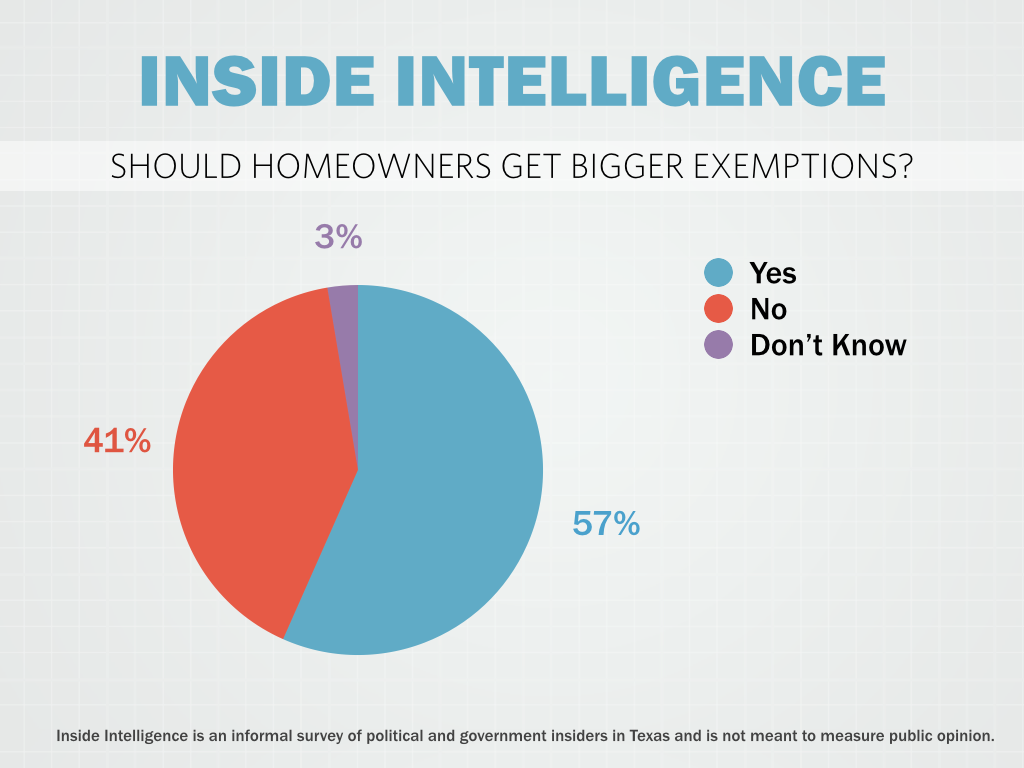 Should the state increase the size of property tax exemptions for homeowners?

• "Instead of playing the exemption game, why not reign in the appraisal districts to ensure the appraisal better reflects the market value?"

• "Ultimately it's not about the appraisals but the tax rate. Governments decide how much revenue they need and take it. If appraisal values are lowered, tax rates go up until the desired revenue is achieved. That is a net zero game. This implies that homeowner property tax exemptions are political payoffs for take your pick...veterans, seniors, widows of veterans, keeping bees on your property, etc."

• "If the state would find a different funding source for schools, then we wouldn't need an increase in property tax exemptions."

• "The state would have to gut up and pay it's fair share of public education so that local school districts could increase exemptions, and we all one that's not happening with the current lege."

• "Shifting taxes from voters onto business properties doesn't help do anything positive. Voters need a stronger say in what tax rates are that are imposed on all properties."

• "As a matter of political reality, an increased homestead exemption is probably a needed safety valve for the system"

• "Property tax rates in Texas are high by national standards, but reducing them would require increases elsewhere."

• "Take away the exemption for old people. They use fire, EMS and police more than healthy and young people. Don't they want educated kids who grow up to manage their retirement, provide emergency services and more? Old schmold. If politicians want to find money then have the courage to take on the old geezer lobby!" 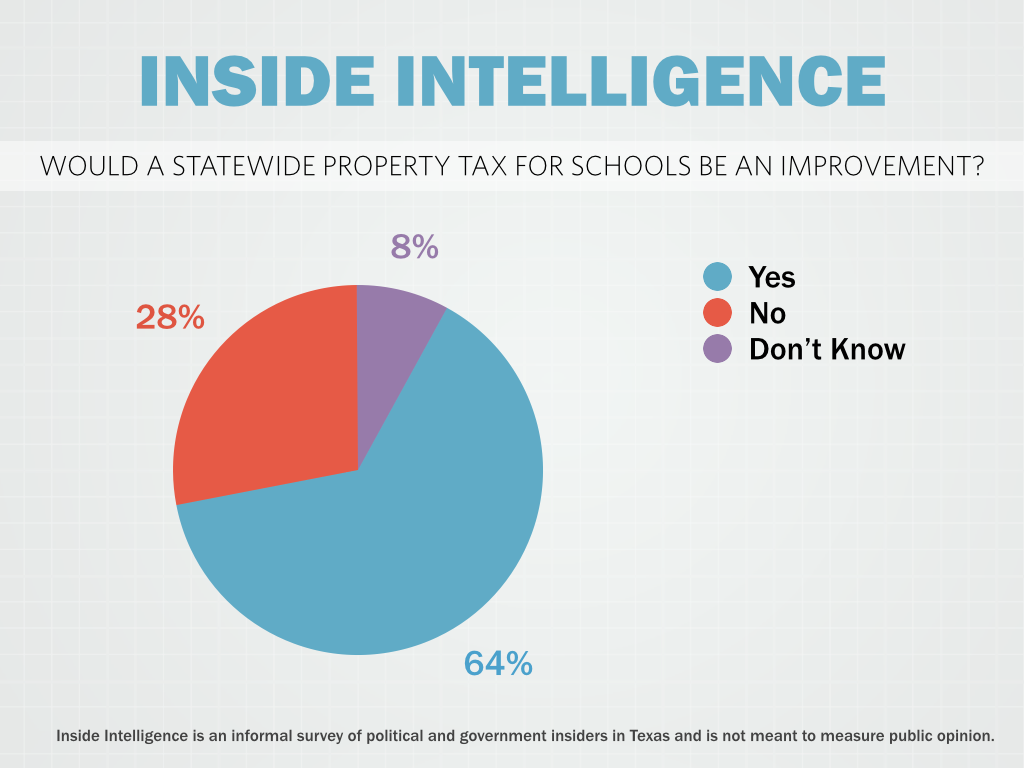 Would the state be better off with a uniform statewide property tax for schools in place of local school property taxes?

• "A uniform statewide property tax rate for schools would be an improvement, but in order for property taxes to ever be fair, there must be sales price disclosure, proper valuation of commercial property and strict enforcement of businesses who fail to report or under report business property. Oh, and elimination of property tax breaks for luring businesses to certain communities."

• "No AND we also need to roll back Robin Hood. Communities should decide how much to invest in their schools."

• "Local control should be priority. The only reason local school property taxes are too high is because legislators keep reducing education budgets."

• "This is absolutely the correct approach. Alas, ain't gonna happen."

• "I'd say 'yes' but a state property tax for schools would probably hurt local political support for things that schools need."

• "Not in this political climate."

• "This would end the local control all school districts have on property taxes."

• "Property wealth is not distributed proportionately to the distribution of school children, resulting in unequal access to local funding. Since you can't ship children around, then decreasing local taxing in favor of a statewide tax would help ensure a child has access to adequate resources regardless of where he or she attends school."