WICHITA FALLS — As the sun rose on Lake Arrowhead late last week, four guys on a motorboat armed with 5,739 pounds of white powder set out to tackle one of Texas' most vexing water problems — evaporation from surface reservoirs. Last year, evaporation cost the state 2 trillion gallons of water, and it has been eliminating as much as 40 million gallons of water a day from drought-stricken Wichita Falls' supply this summer.

The four men, who work for a company called Flexible Solutions, were applying WaterSavr to Lake Arrowhead. The company claims that its product will save the city hundreds of millions of gallons of water by preventing evaporation. At a cost of $400,000 for the product and labor, the city is hoping the experiment, the first of its size in the nation, will work. And the rest of parched Texas is watching. But there are plenty of skeptics.

“For someone that’s spent every weekend on Lake Travis, it was just hard for me to get my hands around,” said Bill Mullican, a former top official at the Texas Water Development Board who now writes water plans for other southwestern states. “How could you do anything on a major water supply reservoir?”

Mullican said he and his colleagues had for many years been approached about evaporation suppression technologies, but water quality concerns and other issues always left them unconvinced. Today may be different, though, especially for dry Wichita Falls, which also recently made a name for itself by directly recycling treated sewer water for drinking water supplies.

Over the course of the next two months or so, the desperately dry city will apply 5,739 pounds of powder every three days to Lake Arrowhead — about one pound per acre of the lake’s surface. (Normally, the reservoir should be almost three times that size, but today it is only 22 percent full.)

After weeks of trying to apply the WaterSavr powder, workers have come up with what they believe is a foolproof technique. While on the boat, they cut open large paper sacks filled with the powder, a mix of food-grade lime and palm oil extract. They suck it into a vacuum pump and then combine it with water to create a slurry that looks something like milk. The concoction is then poured into the lake through two slender pipes in the back of the motorboat.

Evaporation suppressants have been studied for decades as a way to save much-needed water. The idea is almost laughably simple: Put something — anything — between the water and the atmosphere to prevent the precious liquid from escaping.

Researchers and water officials have experimented with everything from covering a reservoir with ping-pong balls to rolling out a giant piece of tarp or plastic film on top of the water.

“There’s some pretty wild ideas out there,” said Russell Schreiber, Wichita Falls' director of public works. Of course, he added, many of those plans wouldn’t fly with boaters and fishermen, or lakeside homeowners. 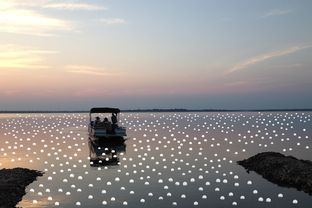 Enlargephoto illustration by: Neena Satija / Todd Wiseman
Water suppliers have experimented with evaporation suppressants for decades, trying everything from covering a lake's surface with ping pong balls to using giant pieces of tarp.

More promising approaches have involved chemicals that aren’t visible to the naked eye that can biodegrade in the water. Called “monolayers,” they have obvious advantages, but also big problems. Since they biodegrade, products like WaterSavr must be reapplied every few days. That’s great for companies looking to sell their product, but not for the buyers.

There is an even bigger issue, though.

“The problem that we ran into … was that the effectiveness of the product was short-lived, especially in moderate and, some cases, mild wind conditions,” said James Kowis, a former water supply strategist for the Lower Colorado River Authority, which manages the reservoirs that serve Austin and much of Central Texas.

When it gets windy, monolayer products can blow to one side of a lake or another, leaving most of the reservoir exposed to the atmosphere and normal evaporation levels. The problem vexed water suppliers and engineers for decades.

Flexible Solutions, which manufactures WaterSavr, thinks the powder solves that problem. The company says the lime powder consists of ions of the same charge, which repulse each other like magnets. If wind causes the powder to cluster, “ionic repulsion” should force it to spread back out.

Moshe Alamaro, a research scientist at the Massachusetts Institute of Technology who has studied evaporation suppressants, doesn’t buy that. He said he analyzed the product in his lab and found that the particles are too far apart from each other to create a strong repulsion effect.

“The monolayer that they sell you, which is 10 percent of the total material, really works,” he said, referring to the palm oil extract. “But the other 90 percent [the lime powder] is unnecessary, in my opinion.”

Alamaro admits that he has skin in the game, though. He’s developing his own competing method of evaporation suppression that involves using skimmers on the sides of reservoirs to pick up material that blows onto one side of the lake and then redistribute it.

Schreiber, of Wichita Falls, said there were no problems getting permission from the TCEQ to use WaterSavr. In a letter, the agency directed the city to monitor water quality and conditions regularly and to “make the data available to TCEQ staff upon request,” as well as to submit a report every 30 days.

Other water suppliers in Texas are taking a wait-and-see approach to evaporation suppressants.

“LCRA is interested in the general concept of evaporation suppression, but we are not considering implementing the technology at this time,” said Clara Tuma, a spokeswoman for the agency. LCRA’s reservoirs lose as much or more water each year to evaporation as the entire city of Austin uses annually.

One former LCRA official believes strongly in WaterSavr: Kyle Jensen, who now works for its manufacturers. Jensen previously worked in the agency’s water supply division and said that WaterSavr has worked on large reservoirs in Turkey and Australia. Wichita Falls’ reservoirs lose 30 to 40 million gallons of water to evaporation each day. If WaterSavr makes good on its claim of saving 30 percent of that, the city could save around 12 million gallons of water each day — the equivalent of the daily use of all Wichita Falls residents combined.

Research suggests that claim may be optimistic — international trials done a few years ago showed savings of up to 29 percent, but on a 10-acre lake. Trials on slightly larger lakes resulted in savings closer to 20 percent, and in some cases, the material degraded too quickly or was eaten by algae or bacteria.

Still, Schreiber said, even if only 10 percent of the water that evaporates is saved, the city could see a daily savings of 4 million gallons, or 240 million gallons over 60 days. At a cost of $400,000 for the product and labor, that amounts to $1.66 per thousand gallons of water saved, which is on par with what residents pay for water in Texas.

The second-biggest trial of WaterSavr in the U.S. was recently conducted in Las Vegas on a lake about 10 times smaller than Arrowhead in a ritzy gated community of 300 lakeside homes.

“Through November of 2013 we used 8,361,000 gallons of water less than our historical average,” the newsletter read. “We can find no other explanation for last year’s water savings other than reduced evaporation due to WaterSavr.”

Disclosure: The Lower Colorado River Authority is a corporate sponsor of The Texas Tribune. A complete list of Texas Tribune donors and sponsors can be viewed here.