Immigration and the National Guard in Texas dominated the news at the beginning of the week, and that’s the subject we chose for the insiders in government and politics this week.

A clear majority — 69 percent — said the governor and others will get a political boost out of the maneuver, and 56 percent said it will not increase the likelihood of the federal government paying more attention to immigration and border security issues.

We collected verbatim responses to the questions and a full set of those is attached. Here’s a sampling: 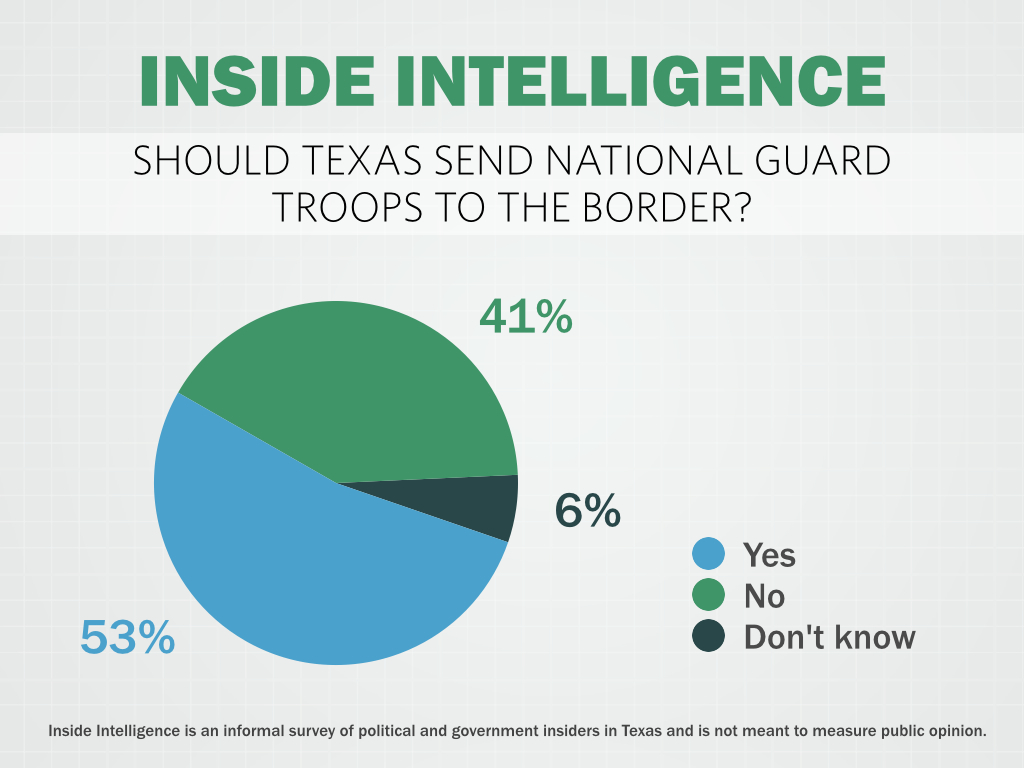 Should Texas send National Guard troops to the border?

• "There are two problems to be solved: 1) securing the border, and 2) providing humanitarian aid to the children. The Obama administration has thus failed on both fronts."

• "Texas has the longest contiguous border with Mexico and the current crisis is happening in Texas. The Feds should step up to lead this effort; but since they've abdicated their duty and responsibility, it's up to Texas to take charge and help secure the border. It shouldn't be this way, but it's where we are."

• "WHAT AN IDTIOTIC RESPONSE! Why would you do that unless you wanted the 'wild west' reputation that our poor state already suffers to be further propagated? Mark my words - sending the National Guard to the border will result in someone shooting someone."

• "My answer would be an absolute yes, if they had the power to turn immigrants away from crossing out border. Why expend the money when we do not have the authority to send them home. We should have secured the border decades ago when we had Republican Presidents."

• "There may be some support they can provide to overwhelmed and probably exhausted border security personnel and local shelter operators but Perry's purpose is to give the impression to a national audience that he is taking control."

• "Military action not needed, humanitarian action is called for." 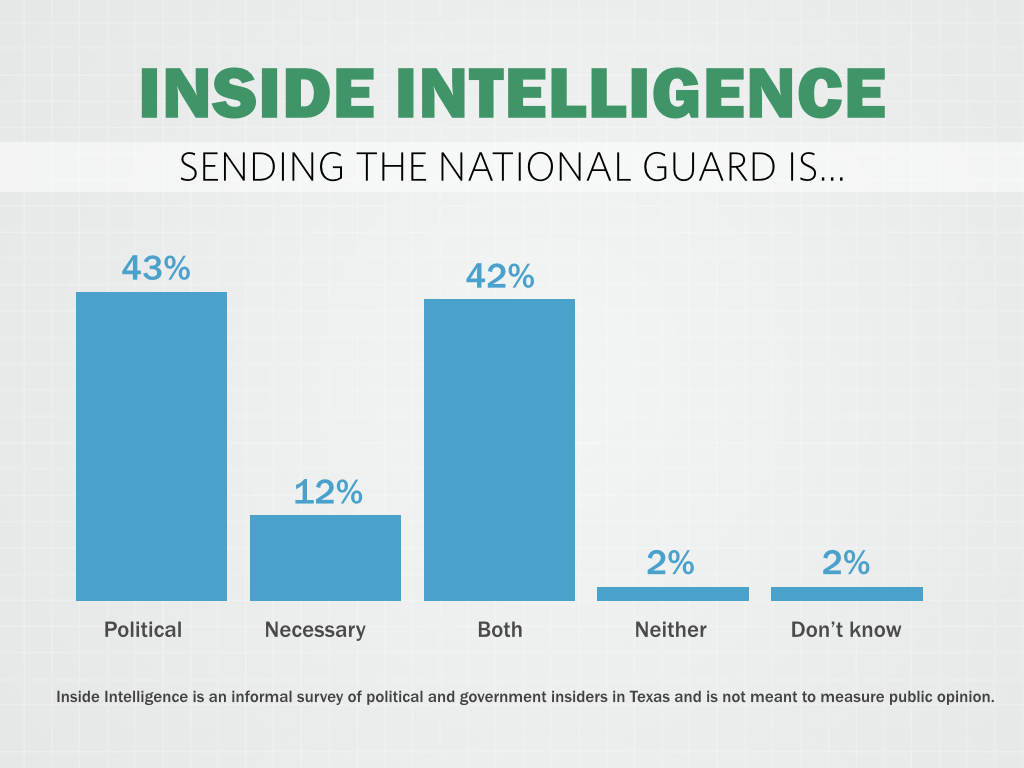 Is sending the National Guard a political move or a necessary one?

• "This a rare instance where the 'right' thing to do, coincides with the politically expedient thing do to. Why can't the Obama administration see that?"

• "One billion percent political. Unless these babies and kids are coming across with pistols and bales of pot, we need an army of child care providers, not an army of, well, army."

• "The communities along the border are desperate and don't have the manpower."

• "It is totally politically driven to boost Governor Perry's national profile among Republican primary voters during the next Presidential election."

• "Is there any agreement on the nature of the problem? We should be thanking the cocaine users in this country for their continuing financial support of the gangs impressing into servitude and murdering children and families in Honduras." 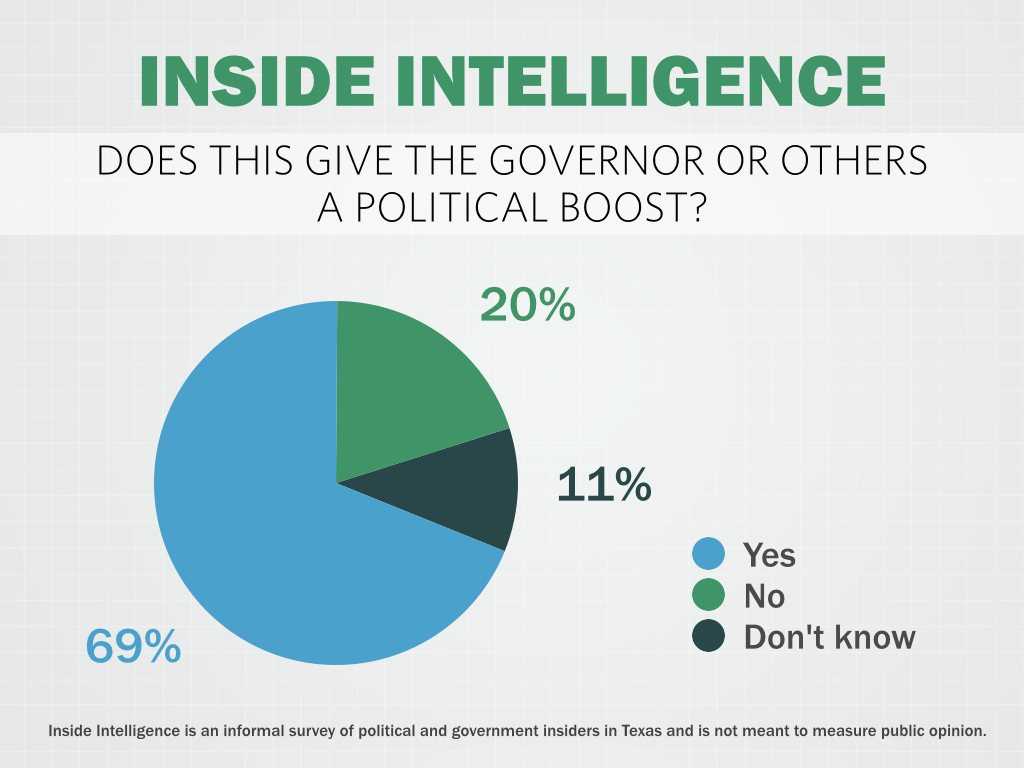 Does it give Gov. Rick Perry or anyone else in Texas a political boost?

• "When doing the right thing also happens to be the popular thing, that is always politically favorable."

• "Perry has to win a primary to become a presidential nominee. The R base is in full support of securing our southern border."

• "If being a genuine leader results in a political boost, then so be it. More power to him for looking out for the best interests of the state and country."

• "Perry gets a boost because he can show in vivid detail how Obama failed to lead."

• "National security is the major concern, not politics."

• "It looks good; accomplishes nothing."

• "I think it could backfire politically." 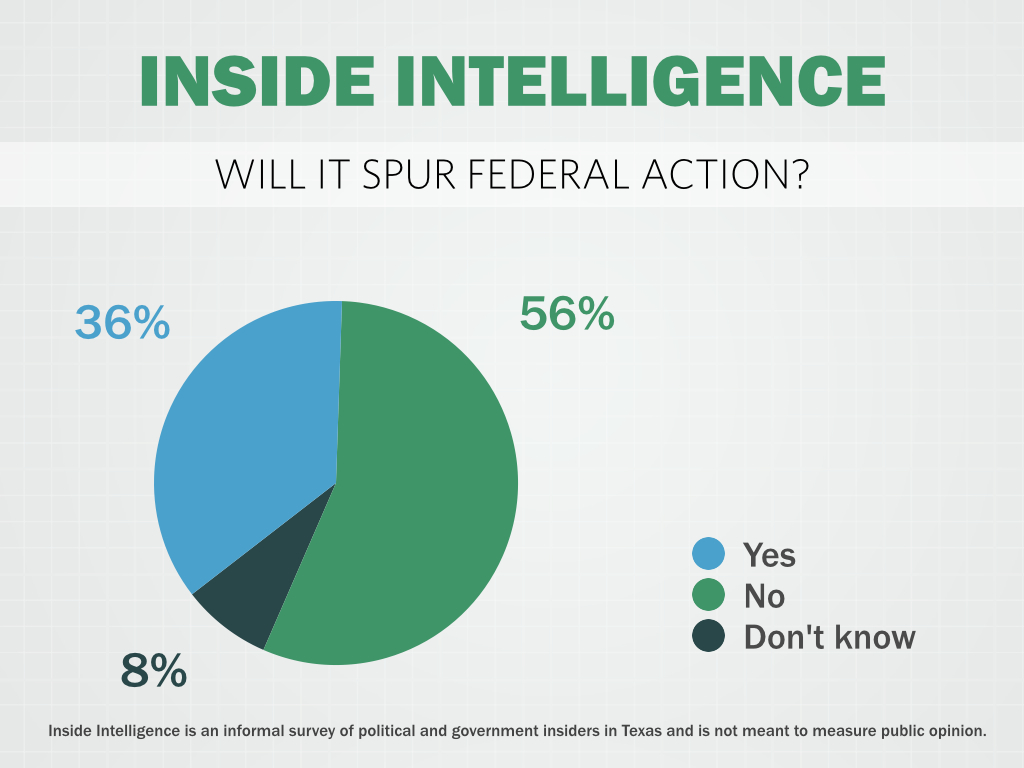 Does it increase the likelihood that the federal government will pay more attention to border security and immigration issues?

• "No but it guarantees that the nation will and that will help the republican and hurt the democrat candidates with the independent voter this fall."

• "Why should the Fed govt step up NOW? Heck, they don't have to man the border AND they won't have to pay the tab (you don't really think the Fed govt will pick up the tab for this, do you?)."

• "Nope, but I'm sure if it was a swing state that needed help the resources would be as free flowing as the immigration."

• "No, not as long as 'the federal government' (read: White House) is intent on choosing politics over governing."

• "The federal government is paying lots of attention. Inaction is a political issue because of partisan extremists, not a matter of will."

• "Wasn’t aware of a lack of attention; dispute is over immigration policy between Rs and Ds in DC and a demonstrably obstructionist position of core Rs...And of course the usual Fed baiting by our red neck provincials"

• "Somehow, someway, we need to get their attention. President Obama would rather pay pool and drink beer than actually visit the border. It's a crisis."