We went to the headlines for this week’s survey of insiders in government and politics, starting with hazardous chemicals and whether those stores ought to be reported to the public as well as to the government. It’s been an issue at least since the fertilizer explosion in West, and 64 percent of our insiders said that information ought to be available to the public. A current ruling from Attorney General Greg Abbott says that the state agency keeping the records can keep them secret.

Two-thirds of the insiders believe Texas should join the rest of the country in requiring its companies to provide workers’ compensation insurance to cover employees hurt at work.

Only one in five insiders think the state will get federal reimbursement for the costs of housing, medicine and other services for migrant children who have massed on this side of the Texas-Mexico border. Who is to blame for the surge? President Obama, according to 62 percent of the insiders, who also blame Republicans in Congress, Democrats in Congress, and federal and state law enforcement, in that order. 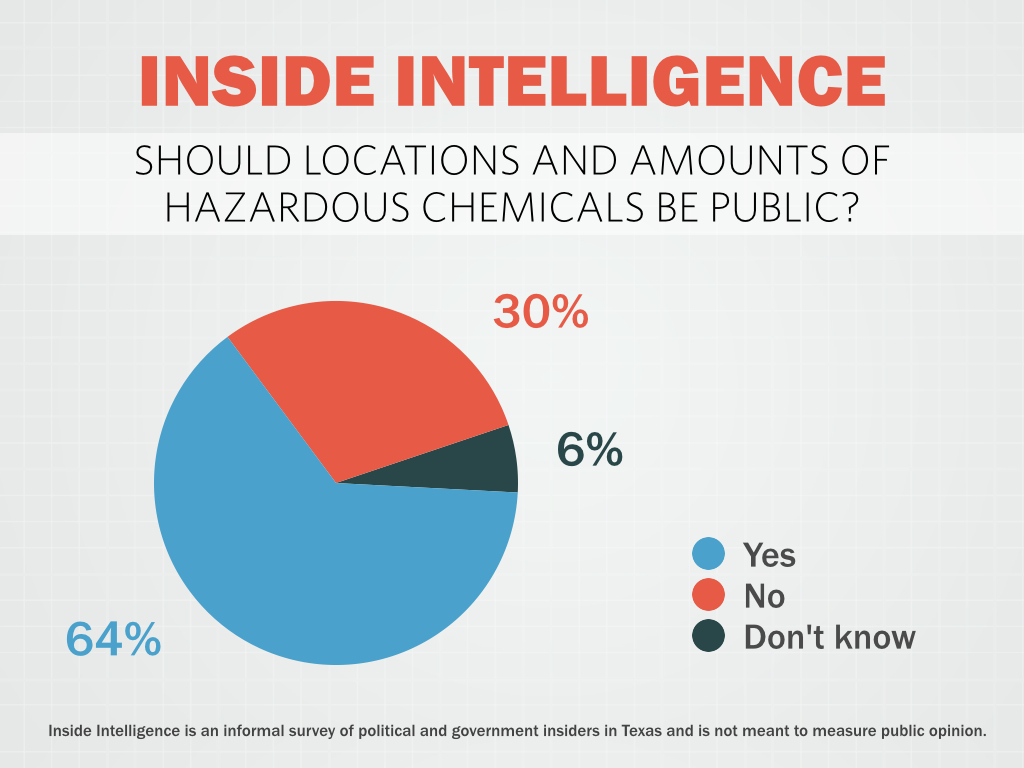 Should government-required reports on the locations and amounts of hazardous chemicals stored in the state be readily available to the public?

• "That would be foolish; duh, don't you think the bad guys would love to know? But, the locations and inventory should definitely be kept by TX DPS."

• "This is not a wedge issue; however, community right to know laws and the need for homeland security will need to be reconciled in future legislative sessions."

• "Not sure in today's environment that we need to advertise where shit is that can be blown up by crazy people."

• "They should be reported to the state and provided to local leadership, but not publicly available."

• "With exception for locations/materials that should be kept confidential for homeland security purposes, but first responders should have all access."

• "This is a no-brainer. Any homeland security concerns are corporate spin to fight transparency." 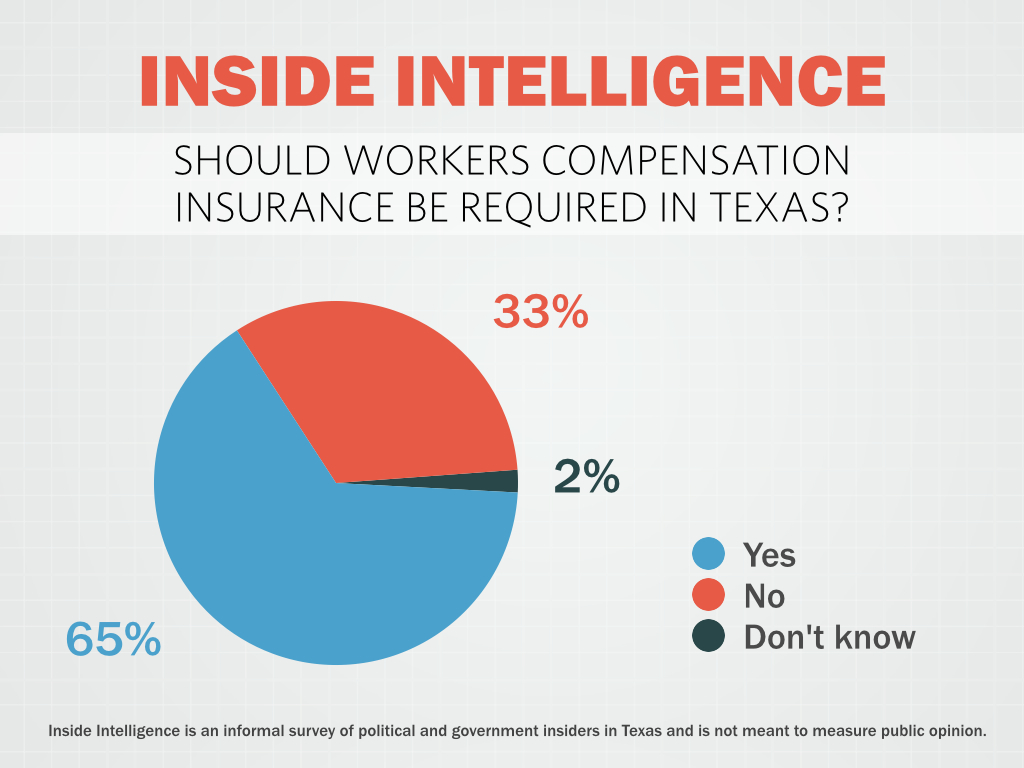 Should Texas employers be required to provide workers compensation insurance for their employees?

• "The current system works. Trading off reduced tort liability in exchange for subscribing to workers' comp, has given both employers and employees the flexibility to choose what works for them."

• "If an employee is hurt on the job, then companies will pay one way or another--either through the state system, through a private policy, or through the courts. No use in forcing companies of all sizes and danger levels to take part in a one-size-fits-all system that wasn't designed to cover their specific needs."

• "So long as there is a workers compensation insurer of last resort. Texas Mutual does not really serve that purpose any longer."

• "I think employers with high injury risk jobs should provide workers' comp coverage. Could be self insured or traditional comp policy. Low risk jobs should not be required to have comp insurance."

• "Insurance should be optional for employers. The smart ones would offer it, though." 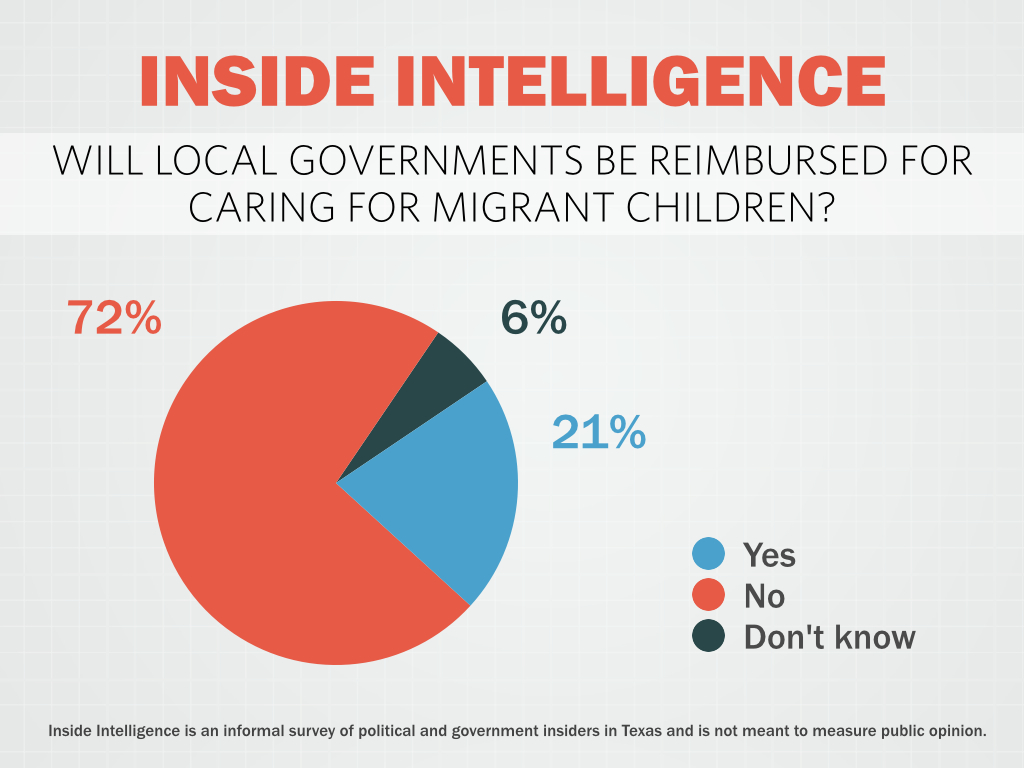 Do you think state and local governments will be fully reimbursed for the costs of housing, medicine and other services for those immigrants?

• "Not a chance; just another unfunded 'mandate' from the feds because this is of their doing, but they care not how it's paid for."

• "For years we have asked about 100% federal reimbursement for emergency (including deliveries) health care services for illegal immigrants. Even though Medicaid pays the usual match, they never accepted the argument that they control foreign policy and therefore should bear the cost for the financial burdens that are not equally distributed across the country."

• "No one knows what to do with these people.... and the citizens will pay whether it is federal or local or state or even non-profits."

• "Although does it really matter if the fed government is reimbursing the states? The money all comes from taxpayers at some point. And if Texas covers the costs directly, we can probably do it more efficiently." 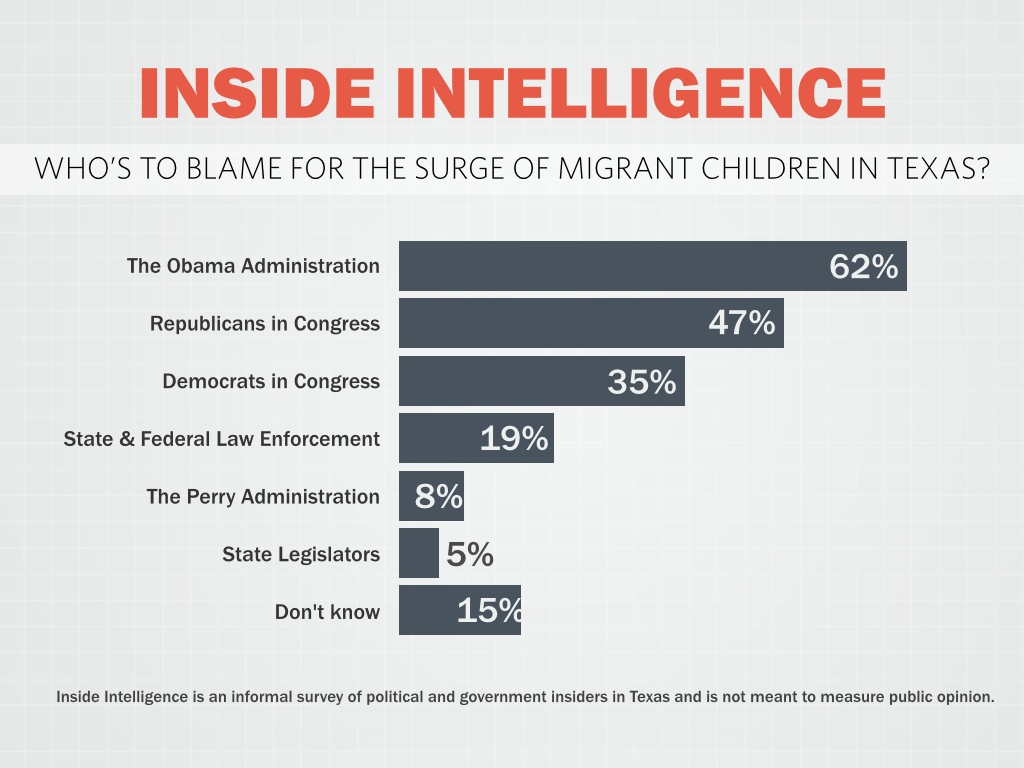 Who do you blame for the swollen population of immigrant children who have crossed the Mexican border into the U.S.? [Check all that apply]

• "Complete incompetence and dereliction of duty by POTUS."

• "Also U.S. foreign policy and drug policy for most of the previous century. There's a reason most of the kids are coming from Guatemala, El Salvador, and Honduras, but not Nicaragua."

• "Plenty of blame to go around. It is what happens when politicians are not looking at a problem comprehensively and trying to solve it, but are, instead, putting politics first.”

• "None of the above. Horrible crime, the drug war and the sex trade are the reasons this is happening. The same reason the legislation was passed and signed by George W. Bush. No one in a safe, healthy environment leaves their home and family or puts their children in at risk unless it is the only option."

• "Casting blame will not solve the problem. People escaping human rights issues and poverty have ALWAYS streamed to the U.S. We are a magnet for the less fortunate. Even those who live in horrendous poverty by American standards may have it better than in their home country. People from trouble spots around the world will continue to be attracted to this country."

• "Members of both political parties in Congress are to blame for the inaction taking place in DC. They are too concerned about scoring political points with their respective base of supporters before the mid-term elections in November. As a result, neither group is willing to set aside their differences to work out a compromise with respect to the immigration/border security issue."

• "None of the above. I doubt any of these items are on mamma y papa's mind as they say adios y Buena suerta to their beloved 7 year old whom they want to at least have a chance to avoid squalor, violence and a dead end."

• "It is a refugee crisis. America has a responsibility to follow the law and provide these children refugees protection under the law, as well as provide humanitarian treatment."

• "There is no sound bite villain in this drama."