With the University of Texas Board of Regents meeting this week to consider the fate of Bill Powers, the president of UT-Austin, we asked our government and political insiders about the continuing drama. Powers resigned, effective next June, after the survey was conducted.

Sixty percent said the impeachment proceedings against Regent Wallace Hall should proceed in the Texas House. About as many said that the regents should wait until after Gov. Rick Perry’s term ends in January before naming a new chancellor to replace Francisco Cigarroa and — after he leaves next June — a replacement for Powers.

And 59 percent say that a governor should not have any say in who is named chancellor or president of a state university system or school.

The insiders made comments on the questions as they went and a full set of those is attached. Here’s a sampling: 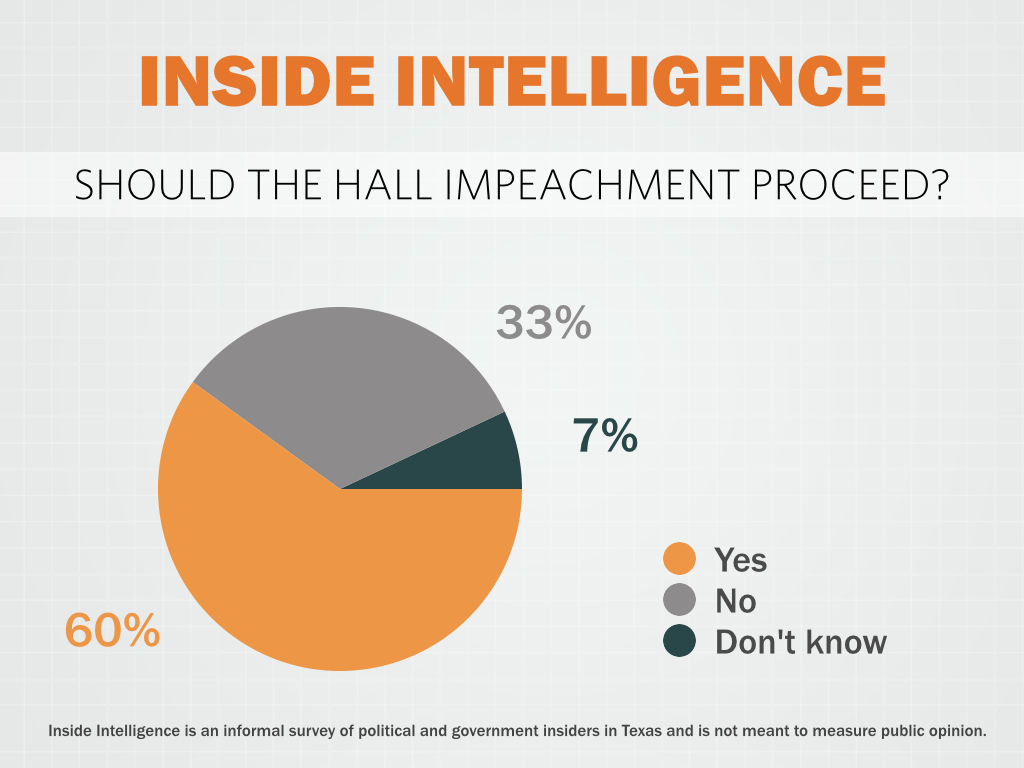 Should the Texas House continue its impeachment inquiry against Regent Wallace Hall?

• "Get a grip, people. The obsession with UT and Texas A&M exhibited by the Legislature and the Governor borders on pathological. What about the other 95% of the kids in Texas institutions of higher education? Where's the obsession with community college tuition, rural campuses, and fast growth urban schools?"

• "If you start an inquiry, you should finish it."

• "If there is sufficient evidence that he misused his official capacity then I think it warrants repercussions."

• "They should have never investigated the guy for asking questions people did not want to answer."

• "They are at a point of no return. I'm not sure they ever thought this through. They now have no choice but to continue."

• "The law relating to impeachment of state officials, such as regents, is broad to say the least. This investigation is and has been purely political and to go forward opens up a Pandora’s box. Impeachment should be only used for real misconduct, not as political theater."

• "I don't particularly care and--so long as it doesn't stray into football--neither will the vast majority of Texans." 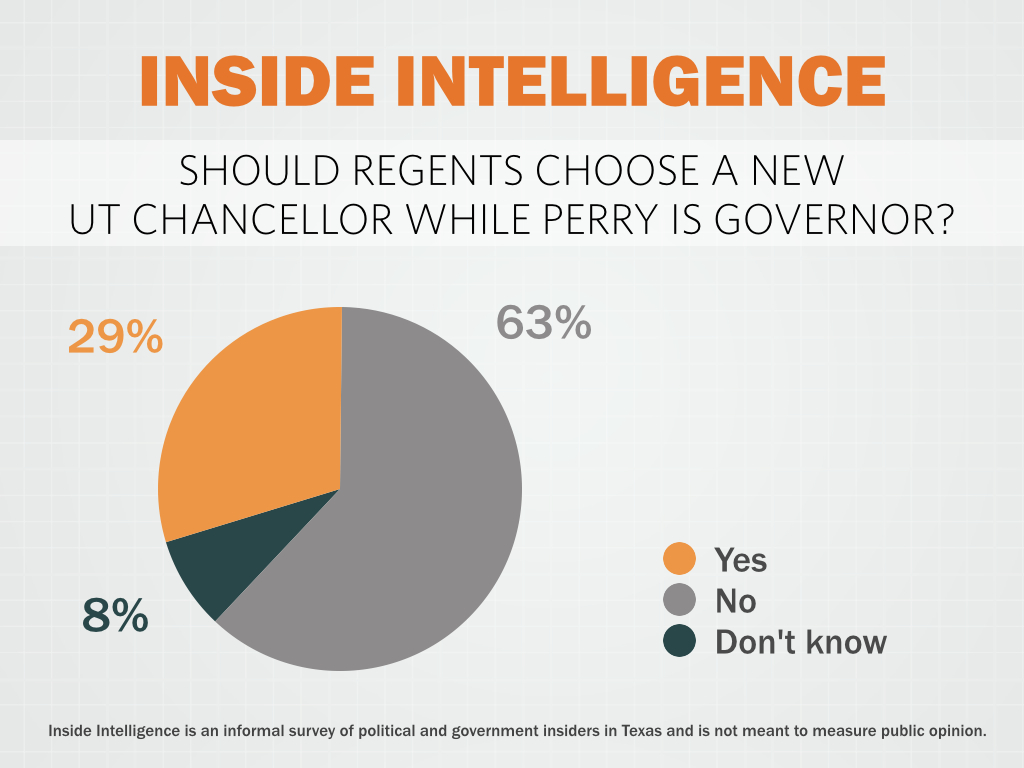 Should University of Texas regents choose a new chancellor while Rick Perry is still governor?

• "The process should begin unless it's believed the three new regents would significantly alter the outcome."

• "It is a sad commentary on the character of the governor that UT supporters even have to worry about Rick Perry having any input into or influence over the selection of a new chancellor or president of the University of Texas. But, Perry's demonstrated over the years that he's the kind of person who would like to gig 'em a little bit on the way out."

• "They should take the necessary time to vet candidates, and if the right one is found they should move ahead regardless of who's Governor."

• "If there is a qualified successor, why not?"

• "The best potential applicants will not want to dive into a political maelstrom. The appointment should wait until after a new governor can settle things down." 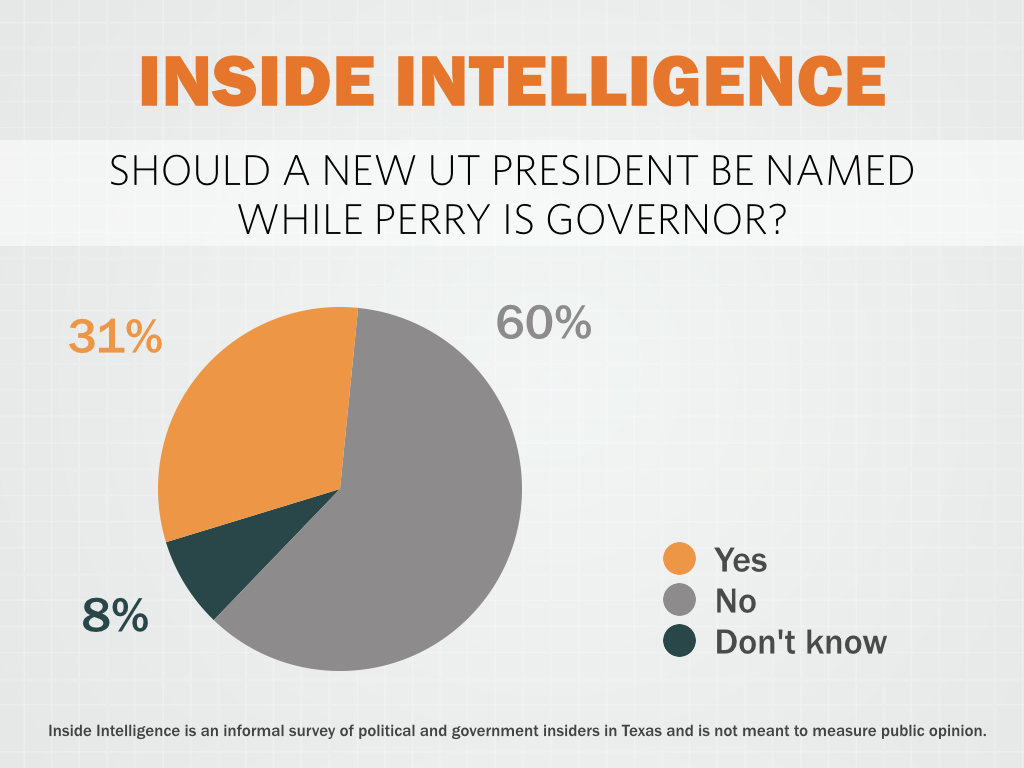 If University of Texas at Austin President Bill Powers resigns or is fired, should UT’s chancellor name a new president for UT-Austin while Perry is still in office?

• "They should take their time and hire a president without worrying about who is Governor."

• "Fears that Perry will damage the UT reputation are misplaced. Too late, he's already made it a national laughingstock."

• "Rick Perry wants to saw Varsity's horns off…and his regents are the saw."

• "The best potential applicants will not want to dive into a political maelstrom. The appointment should wait until a new governor sets a new course."

• "Does anyone not see a pattern here? Mr. Perry is intent on doing GRAVE harm to UT Austin - as long as he is in office that is what he plans to do! (Heavens I sound almost like our crazy conspiracy theory governor, except in this case it is the TRUTH!)"

• "Silly question. They should pick a president when they find a good candidate, irrespective of who's governor." 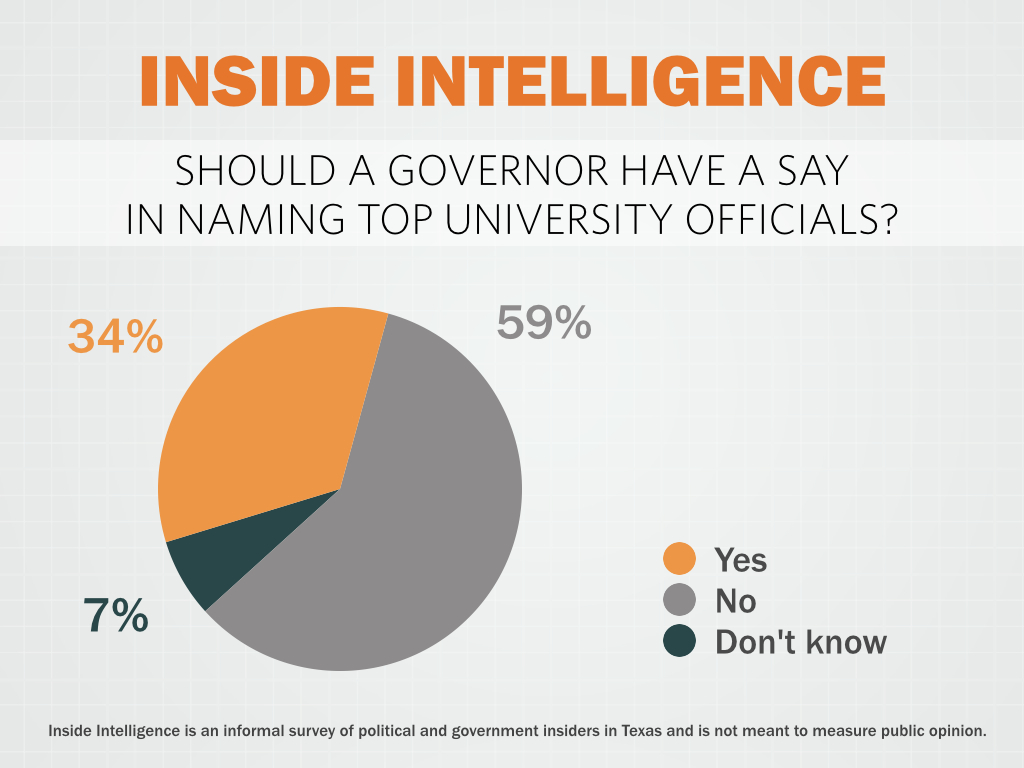 Should a governor have any say in naming the chancellors and presidents at state universities?

• "The Governor appoints the regents who make these decisions, and he signs the budgets that fund these universities. Why wouldn't he have a say?"

• "Governors need to stick with the powers that they have under the Texas Constitution and state statutes instead of creating new unauthorized powers."

• "This is complicated. Ideally, no. We should be able to trust academics and university leadership to select the best person for the job. However, once a Board of Regents becomes as politicized as this body has, oversight is required. Contrast their behavior to the UH Board of Regents and their selection of Khator. UH has only gained in national reputation and campus politics have been minimized, even through significant leadership shake-ups."

• "There is no way to get around the influence of the governor."

• "Yes. Governors appoint Regents. Regents hire staff. That is having a say."

• "They always have and always should have a say."

• "I know it's not been in vogue in Austin for the past few decades but I sort of like following our state constitution: The governor appoints--subject to confirmation by the senate--independent members of the governing bodies of state universities and agencies. Those boards, in turn, set broad policy for their organizations based on statutes and budgets adopted by the legislature and signed by the governor. Board members then hire and oversee the top officials at their agencies to carry the adopted policies."

• "They always have, and they always will. Stop being naive."