More than half said the Democratic Party’s position on immigration is a net positive. About as many — 53 percent — think the party’s position on the federal Affordable Care Act hurts the party’s chances. Asked whether the conventioneers created any political opportunities for Texas Republicans, 52 percent said no. But nearly a third — many of them citing Trey Martinez Fischer’s line about the GOP standing for “gringos y otros pendejos” — said the Republicans should be able to take advantage of that. 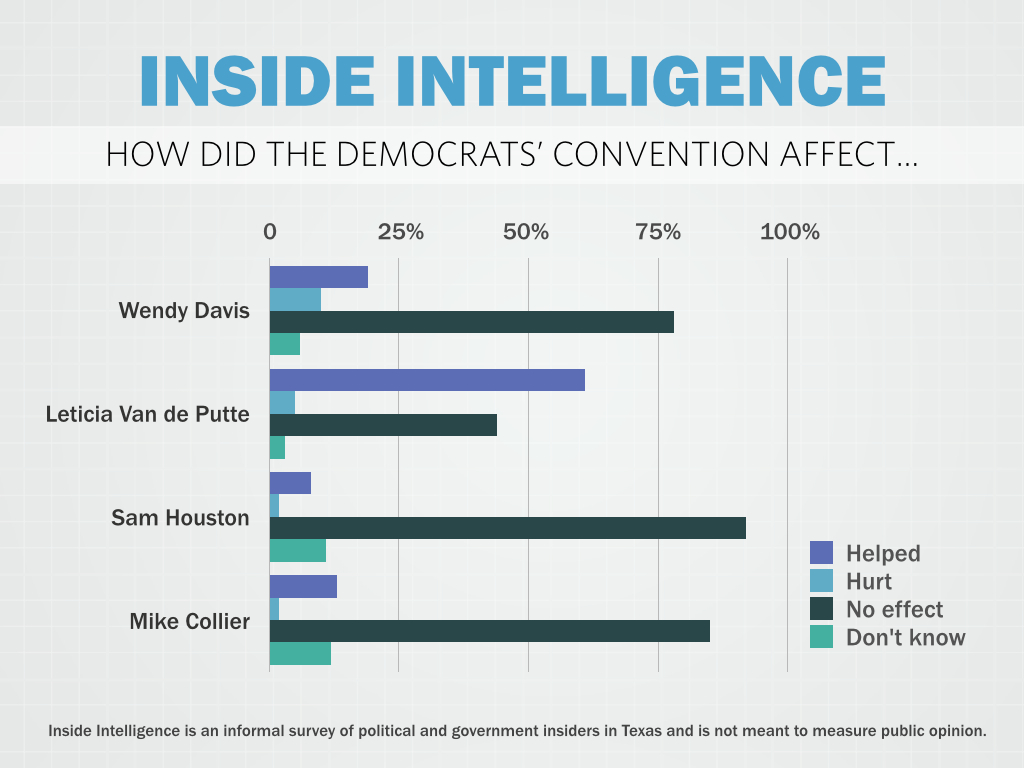 How did the state Democratic convention affect the political prospects of these candidates and officials?

• "Democrats are now openly saying Davis is just a money maker for us, but Leticia can win."

• "By all accounts it appears that the entirety of the convention was the intro to LVP's speech, and the speech itself."

• "The Democratic Party continues to fail to speak to a majority of Texans. In fact, it continues, unlike the party in the late 80s and early 90s, to overtly show Texans it stands opposed to their basic ideas."

• "It was a strong convention and helped all of the democratic candidates. By comparison, they seem the rational choice." 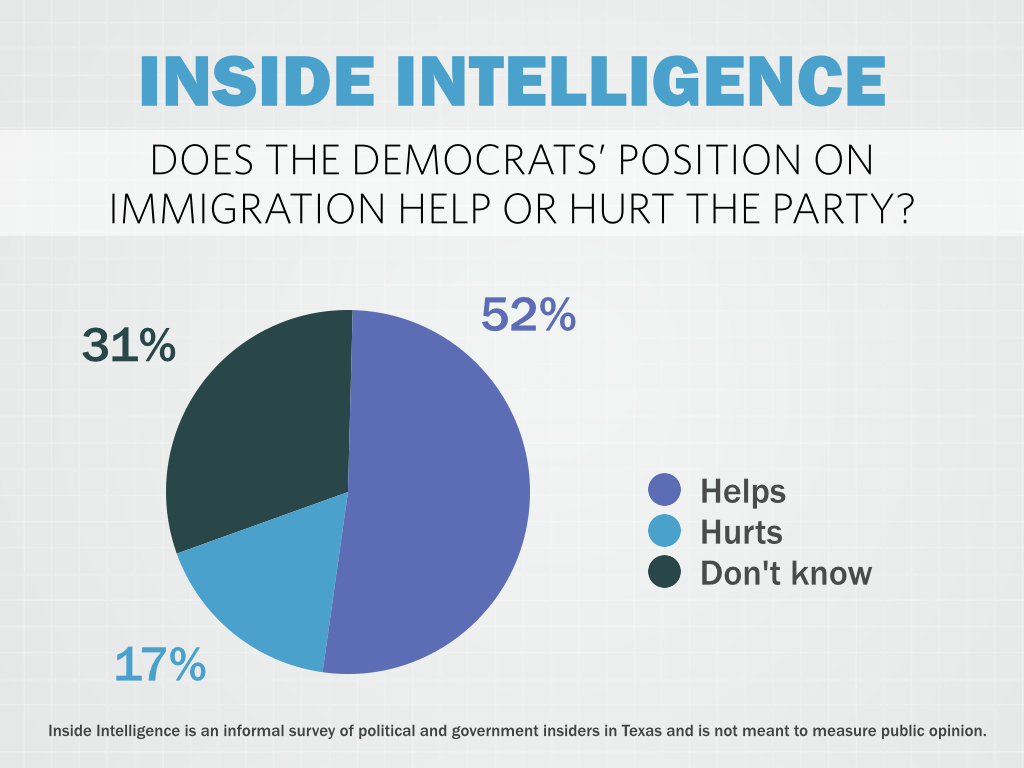 Does the TDP's position on immigration hurt or help the Party?

• "It helps it in the long term but not in the short."

• "They don't seem to realize how damaging and condescending their rhetoric is. They are essentially willing to de-franchise everyone else in deference to immigrants who come here illegally -- The idea that TMF's thought his 'Gringos and Otros Pendejos' would sell is a clear sign of how out of touch they are."

• "With their base only. It does nothing to expand their appeal. I'm assuming their game plan is to wait for the brown wave."

• "Hispanics' don't vote and the people who do want to deport all illegals anyway." 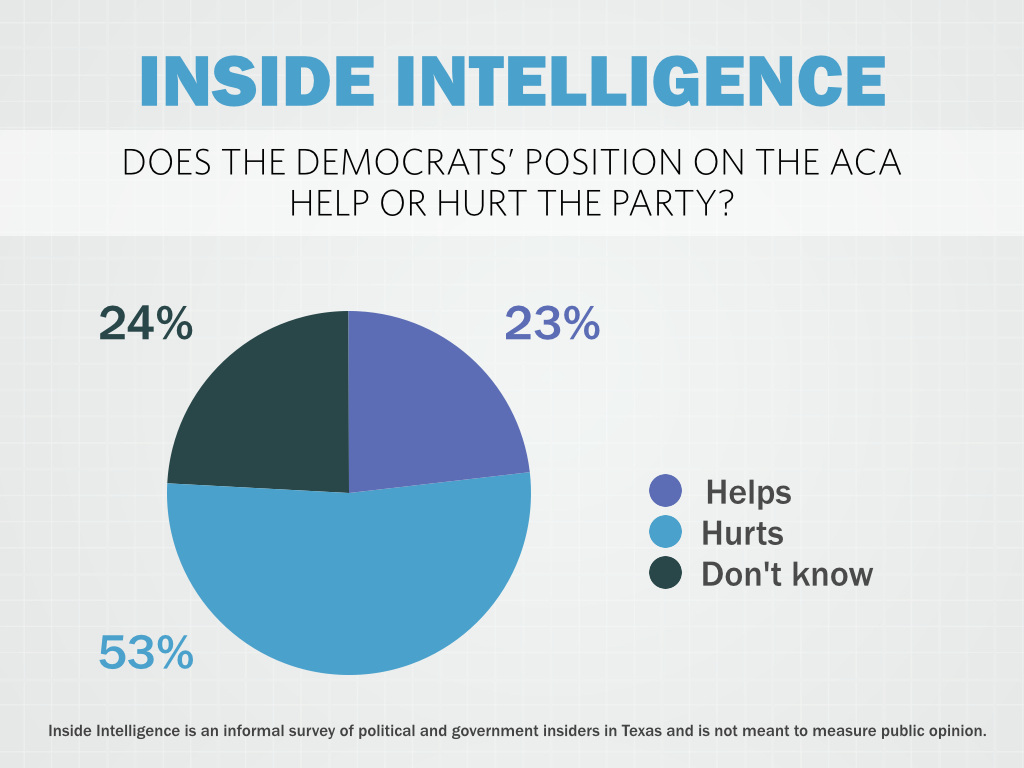 Does the TDP's position on the Affordable Care Act hurt or help the party?

• "The Democrats can at least say they are 'for' something. Unfortunately it's not what Texans are 'for'."

• "They take a strong position in their platform endorsing and calling for the expansion of the Affordable Health Care Act, even though polls consistently show that Texas voters don't want Obamacare."

• "Keep moving left on this issue and supporting a failed policy that even those in the middle and some leading Dems are against and it will continue to make the TDP irrelevant. Funny how Davis is running from her big day in the Senate and not talking about so called reproductive rights as it relates to healthcare." 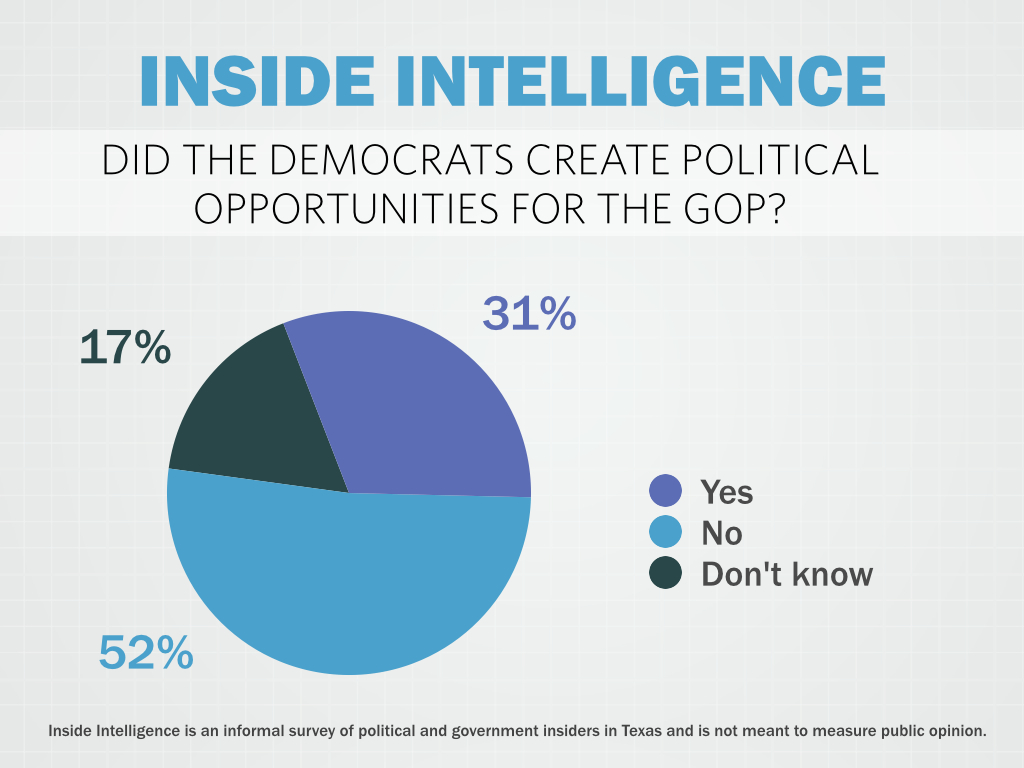 Did the Texas Democratic conventioneers create any political opportunities for Texas Republicans?

• "State party conventions are irrelevant except for some momentary bad press while the fringe of the party enjoys its moment in the spotlight."

• "If TMF (F3?) qualifies as a conventioneer, then the answer is YES."

• "I don't think anybody is paying attention to anything they are doing. It's doesn't matter what they talk about."

• "Making it all about women is not a winning strategy. Furthermore, not all women in Texas think like the leftist feminazi women in the TDP"

• "What opportunities did the Rs need to be given in a one party state?"

• "By continuing to place itself too far to the left and creating a clear image of that, the Democrats broadly allow a newly fringe Republican Party easily to stay in power. When this group of Ds again only gets in the low 40s, it will once more discourage serious Ds from running for yet another round. Unbelievable."

• "'Gringos and pendejos.' Childish, makes any swing voter who has any sort of R vote history defensive, off-put. Abbott et al have the resources to make that one hurt."