The Republicans started the month and the Democrats end it with a state convention that framed this week’s questions to our government and politics insiders.

Democrats are trying to claw their way back into Texas politics, and 73 percent of the insiders say they should be trying to attract moderates and independents, while 15 percent said the Democrats should try to appeal to Democrats.

Finally, we asked for a little forecasting: 36 percent of the insiders think the Democrats will do better than usual in this year’s elections, but 55 percent said the results will be about the same as they have been and 8 percent expect things to get worse. 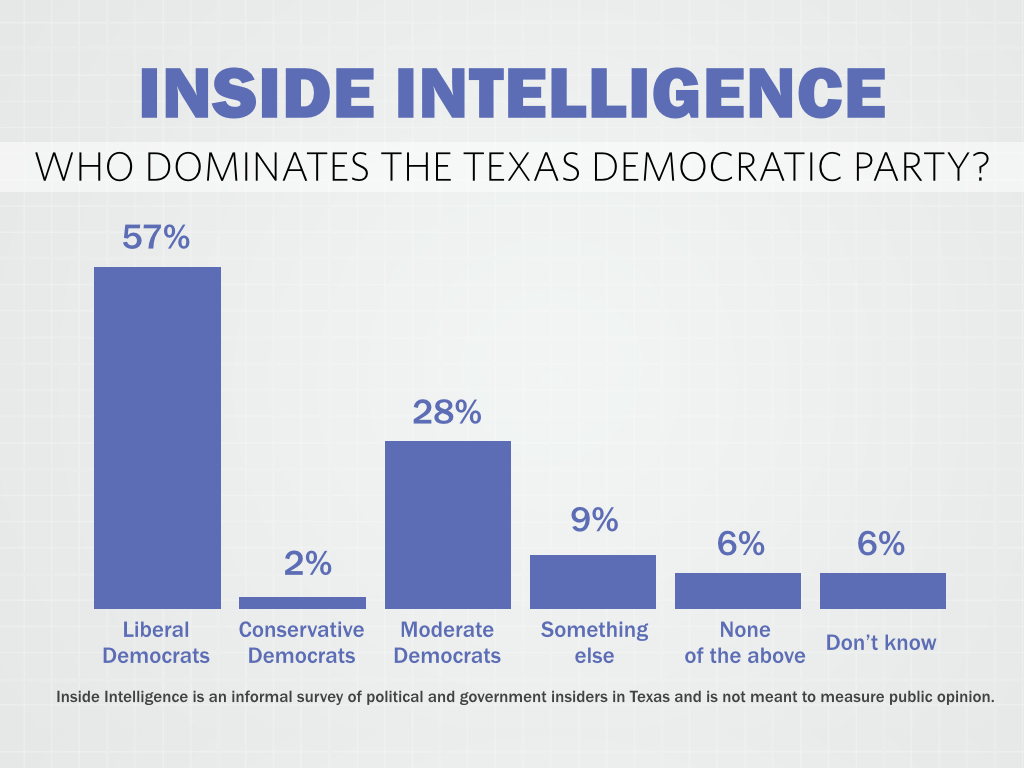 The Texas Democratic Party is holding its state convention this week. Based on the primaries and the runoffs, how would you describe the dominant forces in Democratic Party politics in Texas right now?

• "You forgot to include as options, Park Slope New York liberals and Hollywood check-writers."

• "I call them Business Democrats"

• "Way too left. This is why the Democrats will make no progress at electing statewide candidates in a year when they should have made progress. The absence of moderate influences continues to doom this party."

• "The Texas Democrat party has become little more than out of state choreographers that do not have a clue about Texas Politics. They try to present an unreal picture of what Texans are and claim that it is normal. They further try to make everyone believe that their left wing views are they way everyone thinks. And now we hear about how the strongest economy in the nation has it all wrong. Texans need to take back the Democrat Party or they will be nothing but a freak show."

• "I didn't realize there was still a statewide Democratic party." 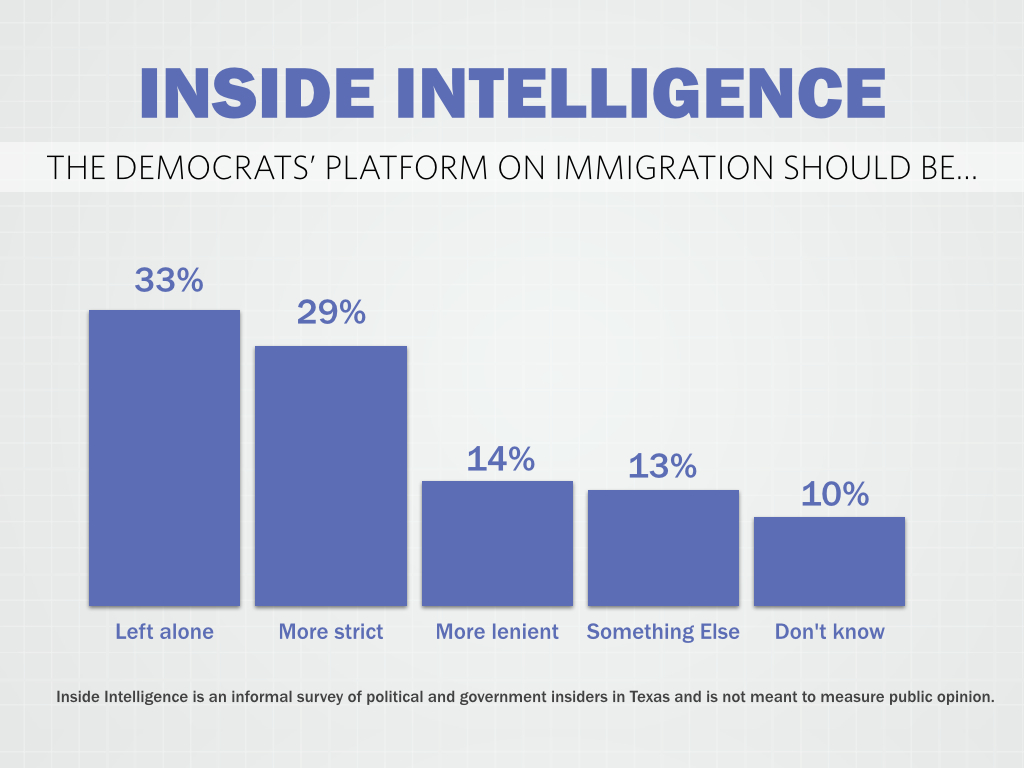 Democrats are expected to debate their immigration platform at the convention. What would be the best outcome?

• "That powder keg blew up on the GOP, so if the Dems are smart, they will leave it alone."

• "Ask any Valley Democrat and they will tell you that the party will have to start addressing border security. RGV voters have first-hand knowledge of the negative impact an uncontrolled border has in their communities."

• "No win for the D's here because of the crisis at border."

• "Texas has a humanitarian crisis on its border and the GOP is responding w gun boats and helicopters. It is fundamentally UN-TEXAN to ignore the needs of children, regardless of their birthplace."

• "Who even knows (or cares) what their immigration platform is right now? It's moot--no one pays attention to party platforms anymore." 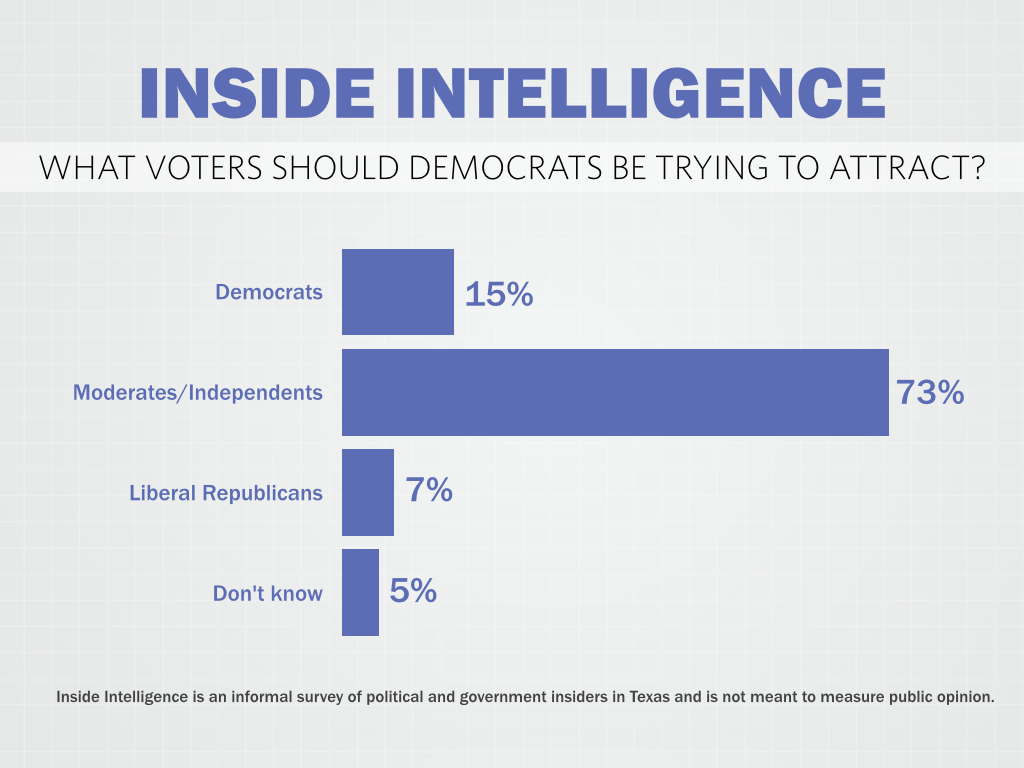 What voters should Texas Democrats be trying to attract right now?

• "It depends on the Democrat. For example, based on Wendy Davis' primary performance in the Valley, she has a lot of work to do simply to shore up that part of the base."

• "Somehow they're going to have to attract voters repelled by Sen. Patrick to help their most viable statewide candidate win the Lite Guv spot. God help us all if they are not successful."

• "Activate the base while also appealing to moderates and independents on issues that are not alienating. Leticia Van de Putte understands this."

• "Democrats should be trying to attract every Texan under age 30."

• "There is nowhere else for the moderate to go right now."

• "EVERYONE. Too many republicans that are VERY scared of their candidates, platform and the direction of their party. I believe you will see that when they go into the privacy of the voting booth and cast their ballot."

• "Anyone breathing. They're like Delta House: 'We need the dues!'" 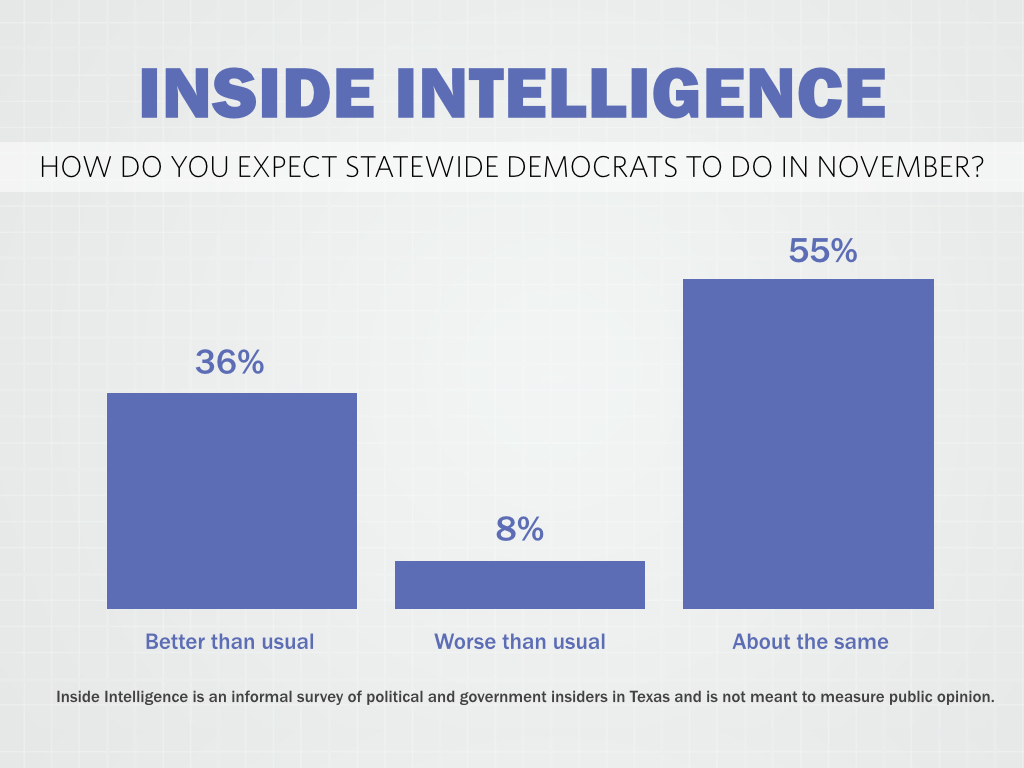 How do you expect statewide Democratic candidates to perform in the general election?

• "This election cycle will be worse for the Democrats than 2010. Obama, the liberal DC crowd and foreign policy decisions by the executive branch will smother all Democrats nationally."

• "Wendy et al. should expect about 40%, give or take a couple of percentage points."

• "We won't win, but it'll be the best step forward we've taken in over a decade."

• "I know too many Republicans who will NEVER vote for a democrat. Until that changes, Democrats are cooked (cuz we know they won't really turn out). The moderate Republican will only switch over (or turn out in higher numbers) when they see what kind of psychopaths they've allowed to be elected."

• "To think that a group of DC liberals can come in and have a dramatic impact on Texas elections is idealist but not reality."

• "At this stage of the campaign a few years ago, I actually was seeing more Bill White bumper stickers on cars than I am seeing Wendy Davis bumper stickers."