This week, we cribbed a trio of education questions from the University of Texas/Texas Tribune Poll and put them to our political and governmental insiders.

Given a list of proposals and asked whether they would be effective, the insiders were in favor of all but allowing school vouchers. They were most enthusiastic about providing incentives to encourage people to become teachers, increasing teacher pay, and increasing funding for the schools.

When asked to choose the most effective idea from the list, 24 percent chose increased funding for schools, followed by 16 percent who think establishing a statewide pre-kindergarten program would be best, and 13 percent who would put the incentives for people choosing teaching careers at the top.

As always, we collected verbatim comments from the insiders and a full set of those is attached. Here’s a sampling: 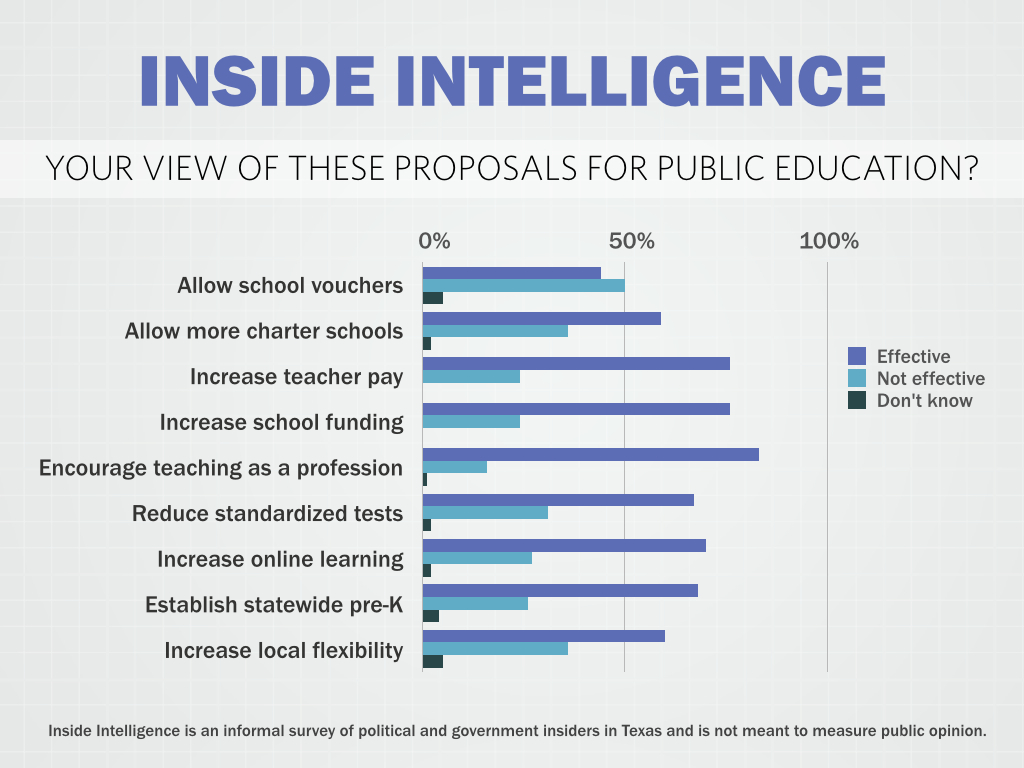 • "As with most things, the devil is in the details. With regard to incentives, are we talking about encouraging more education majors (ineffective), or encouraging mid-career and retired professionals to enter the classroom which would bring in real-word experience (much more effective)?"

• "Teachers should TEACH! It is imperative that students learn reading, math, language arts and have science. It is RIDICULOUS that everything - each lesson, each unit is dedicated to passing a TEST! Companies such as Pearson have made the legislature believe (through the hiring of so many former legislators and TEA personnel) that ONLY testing will help us determine the success our students. Go back to the Iowa Test of Basic Skills or the California Achievement test (yes I realize Texas wants its OWN test, but STAR, TAKS etc. are NOT working). Community colleges in Texas are offering more REMEDIAL classes now than EVER before and why? Because students did NOT learn the basic skills they needed - fundamentals of English, math and science. Further - we don't teach students how to write in CURSIVE? We have generations of students who will not be able to SIGN their names unless their parents teach them? Go back to writing paper and teach students the BASIC skills! Every student is NOT going to college - please allow students to determine College Prep, Basic and Fundamentals/VOTech for their high school degree program! (Wow - sorry for all this)"

• "Texas' public education system should be like any other business. It should be well funded to hire the best people and get the best equipment. And like other businesses, it should also be able to fire employees at will if they're ineffective. Perhaps it needs a citizens IPO to get the funding."

• "It will take all of these items to make the public schools better."

• "There is no better indicator for educational success than early childhood education."

• "Money to public schools, nothing for charters or vouchers. Either we are educating all of the public, or we are short changing the public by giving taxes to religious and/or political groups despite the federal constitution."

• "You didn't ask about 1. Principal autonomy, 1. Adopting merit based instead of tenure-based hiring and termination policies for teachers, 3. Cutting down on Administration staff and costs in Districts, 4. Longer school days, 5. Longer school year, 7. Vigorous curriculums and high expectations for all students, 6. Overcoming teachers unions. Until these things are done, most of the proposals mentioned in your questionnaire will not work." 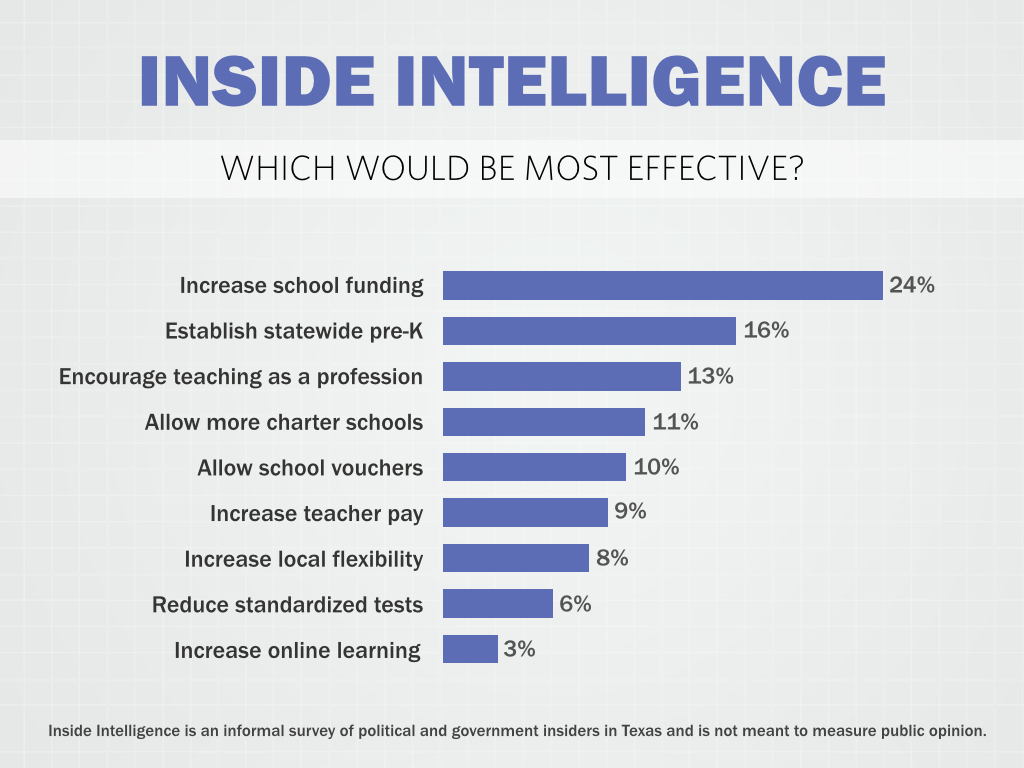 Which of the following do you think would be MOST effective in improving the K-12 education system in Texas?

• "Throwing money at the problem won't automatically make it better (whether for brick and mortar projects or for teacher pay). What will make it better is parental involvement--period. The suburban schools are doing fine. Rurals are generally ok. Urban and border schools are a mixed bag and need the most help--let's focus on helping them and not Highland Park ISD."

• "Research, not withstanding ridiculous assertions to the contrary, is pretty conclusive. Early intervention as brain synapses develop result in future cost avoidance. Should be a strong conservative position."

• "You can always do more with money than you can without money."

• "Uncap the limits on charter schools. Meanwhile, allow any school that is currently private but is willing to fall under the 'charter school' rules and regulations to become a charter."

• "Money does make a difference, but increased funding should be targeted to where the greatest needs are. For example, in the current system lower-funded districts actually have the highest tax rates. Why should parents and other taxpayers be required to pay at higher rates to get less for their children?" 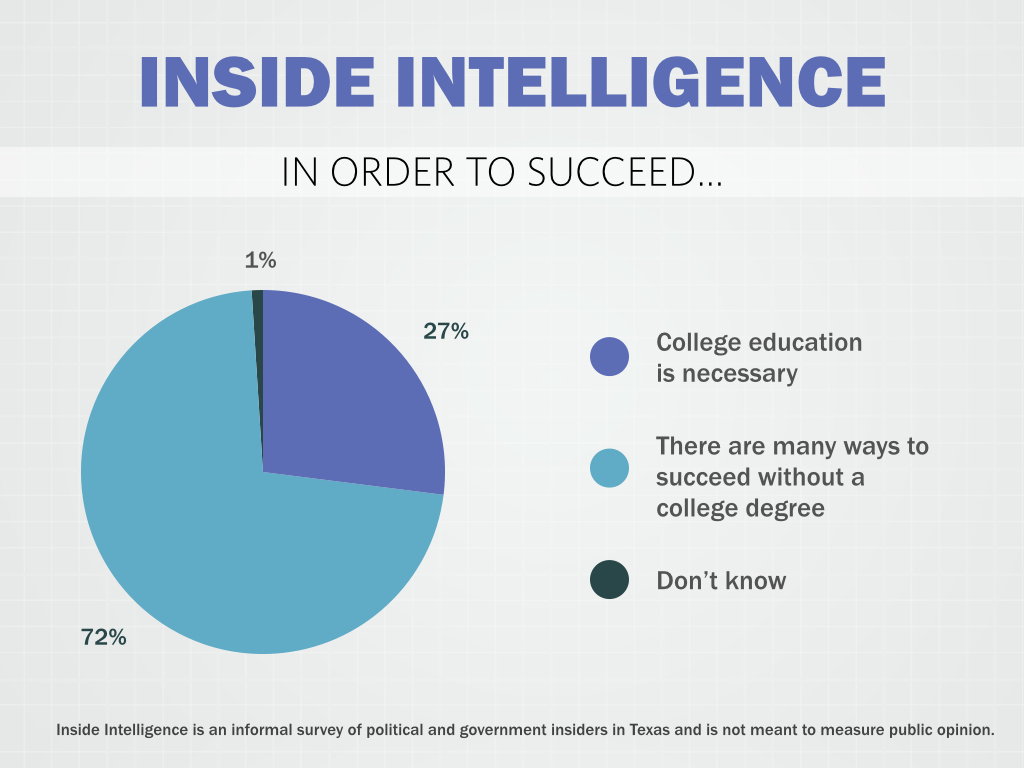 • "There are many ways to succeed but the college education has become the starting point for most jobs that pay above minimum wage. Technical certification certainly helps."

• "'The world needs ditch diggers, too' Judge Smails. Not everyone *needs* to go to college. There are plenty of good-paying jobs out there that do not require a 4-year degree. A two-year degree or trade school certificate works just as well. The problem is the stigma attached to those jobs by most Texas parents--raise your hand if you want your own child to work in a chemical plant or as a truck driver?"

• "Ask the college grad living with their parents with 50K in loans with their degree in English, or the kid that chose that makes 100K a year as a tradesman."

• "If the measure of success is how much one is paid, then the average starting salary of a public school teacher, about $35,000, doesn't seem like much of a reward for obtaining a college education as far as I am concerned."

• "Advice to HS students: yes, it is possible to succeed without it, but don't pass up a college degree if it is an option for you."

• "I may be one of the few who does not believe that the whole world should go to college, but I don't. I have clients that need good mechanics - mechanics that may make in the 6 figures. It doesn't require a college degree but specialized training. Same is true for air conditioning, plumbing and much more. If everyone goes to college, who will make the repairs. Demographics indicate that only 25% of the population has a college degree. Clearly, not everyone is getting one."

• "There are many ways to succeed without a college degree. However, chances for a good career (not a job) are immeasurably better with a college degree. Plus. You're less likely of ever having to utter the question: 'Would you like fries with that?' And again I ask: why did the 'not everyone needs to go to college' push start when our student population became mostly Hispanic?"

• "I guess it depends on your definition of success. But, there is no doubt; it is the clearest path to success."