Now that the convention delegates from the Republican Party of Texas have packed up and gone home, we asked our insiders about the convention’s work and its effect on various public officials.

The big winner was U.S. Sen. Ted Cruz; in fact, he was the only official who, in the eyes of the insiders, got more help than harm out of the convention in Fort Worth. The biggest losers? Dan Patrick, the Houston senator running for lieutenant governor, and Gov. Rick Perry, who was at his last state convention as a state officeholder. The biggest responses for most candidates was “No effect.”

The insiders overwhelming said that the GOP’s platform planks on immigration and on “reparative therapy” for homosexuals hurt the party. Possibly for those same reasons, 72 percent said the Republican conventioneers created some opportunities for the Democrats in this election year. 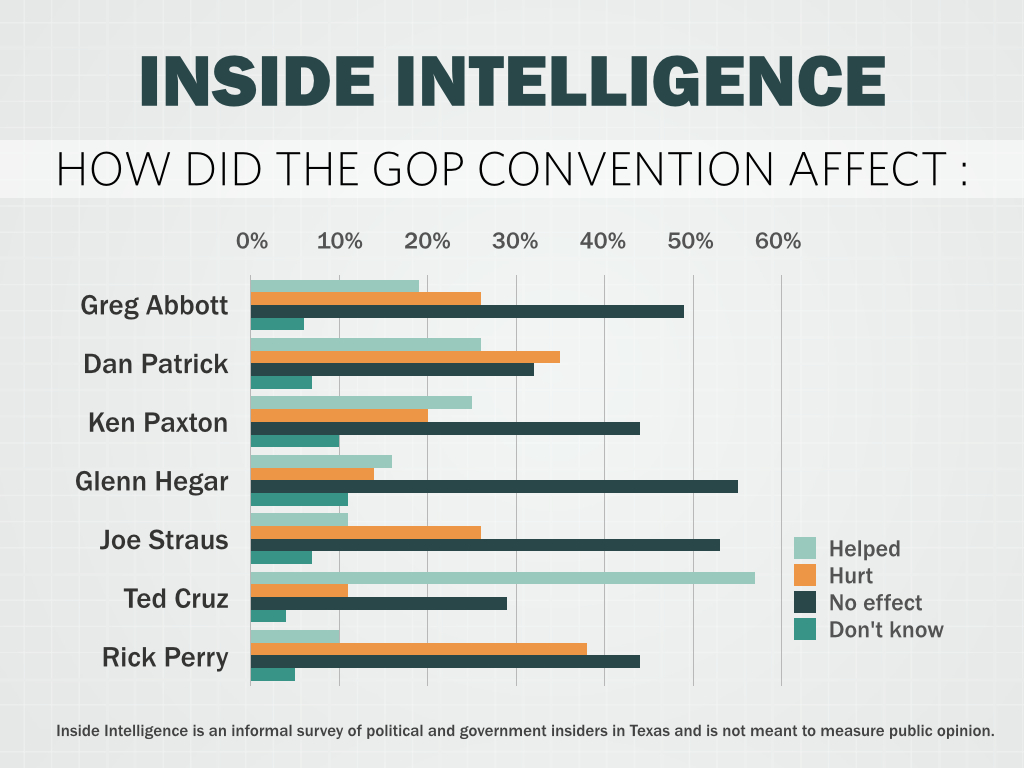 How did the state Republican convention affect the political prospects of these candidates and officials?

• "Cruz, Patrick, and Paxton bet correctly that the TEA Party is alive and well in Texas; Straus is fortunate that the D's will continue to support his speakership; and Governor Perry will need to explain how a viable presidential candidate comes in 4th in his own state party's straw poll."

• "The folks who pay attention to and/or attend the convention made up their mind a long time ago in a galaxy far, far away."

• "The vocal minority has been allowed to takeover operations of the TX GOP. The 5.5% of voters finding it worthwhile to actually vote are getting to write the rules for the majority. The silent majority seemingly prefers to simply complain about the current state of affairs as opposed to doing something about it (i.e. voting). Our low voter turnout is an embarrassment!"

• "Stars were Cruz first, Patrick second -- Cruz is the king of the party -- Patrick is less well-known, so the party got to see him more. Abbott made less of a splash, but no negative -- lots of behind the scenes worry expressed about Paxton's legal problems. Straus is lucky he wasn't booed. Perry reminded everyone why they loved him -- but still not enough to outshine Cruz."

• "Generally, people forget about the state convention as soon as it is over and the breathless next reports about how far right the platform has slipped off the front page. Platforms rarely affect election outcomes."

• "Tea Party type republicans couldn't 'hurt' themselves by adopting whacko positions. They like 'em some Ted Cruz and dog whistle racist politics and no position is too far. Straus has a limited future and Perry has ironically left at the train station holding his bags in his hands." 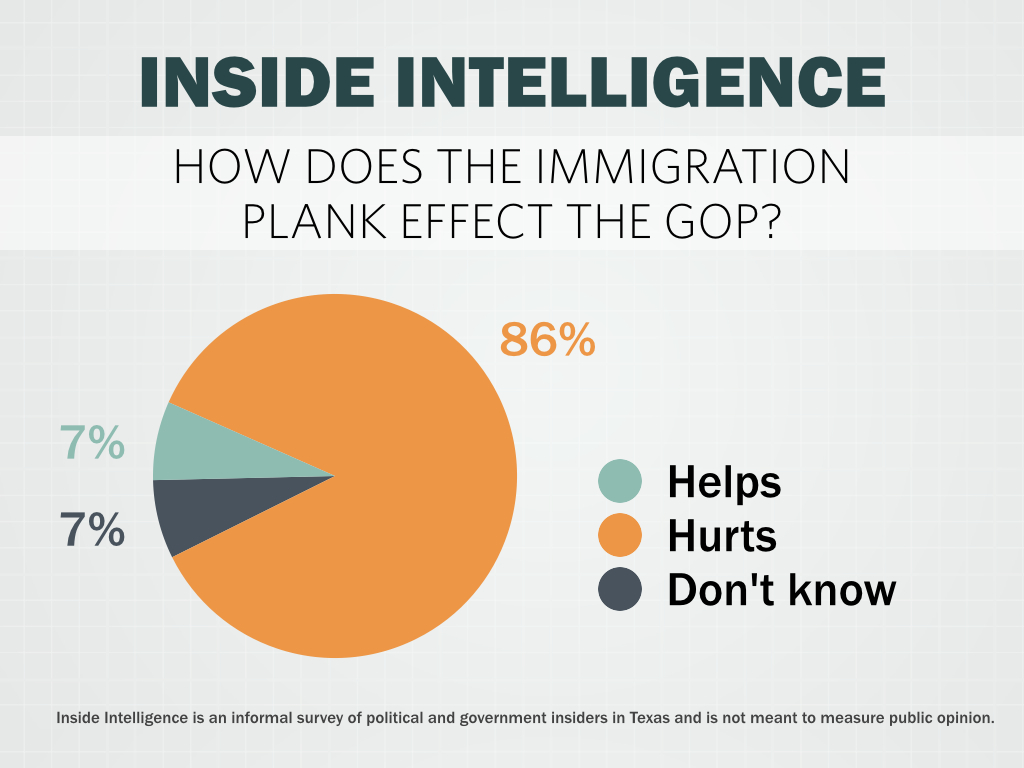 Does the Texas GOP’s position on immigration hurt or help the Party?

• "The GOP loses, like Cantor, when they go against the grassroots. This will keep those eager folks eager to go back to the polls in November."

• "ALL Texans, especially those near the border, want a secure border first."

• "Words matter and the rhetoric is too harsh and divisive. That being said getting the border secure is more important than ever"

• "For years Democrats did everything they could to elect more Republicans; Republicans are simply returning the favor."

• "Texas has been the thinking leaders on this issue for decades -- we have now thrown that away in favor of this reactionary stance -- very bad move on the part of the Tea Party." 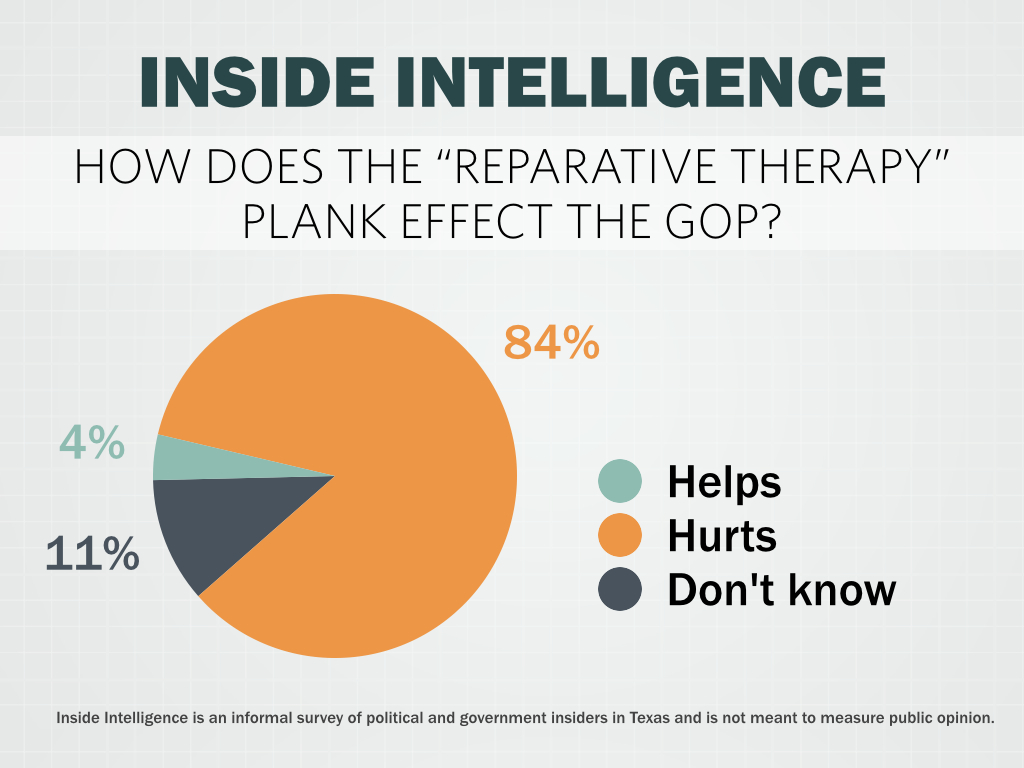 Does the Texas GOP’s endorsement of 'reparative therapy' for homosexuals hurt or help the party?

• "No effect. Media all worked up about this more than voters. Come on...how many gay votes would GOP gain if that wasn't in the party platform?"

• "Everybody has a gay relative. The term reparative implies they are broken and that's not the case."

• "Makes them sound stupid, and will push some tea types who are more closely aligned with fiscal conservatives and libertarians out of the tent."

• "How many days did it take Houston residents to gather signatures to put a provision on the ballot to push back on the activist homosexual mayor's agenda? Reparative Therapy is VOLUNTARY. It was necessary to address it because Texans don't want it outlawed as has happened in NJ and CA."

• "This confirms that the Texas GOP is anti-science and antithetical to an educated society. This should make the RNC run like hell from a Dallas 2016 Convention proposal."

• "Why is this even a topic of conversation? Is the PC rule now that if you're straight but want to be gay, that's good; but if you're gay and want to be straight, that's bad? This whole issue is silly." 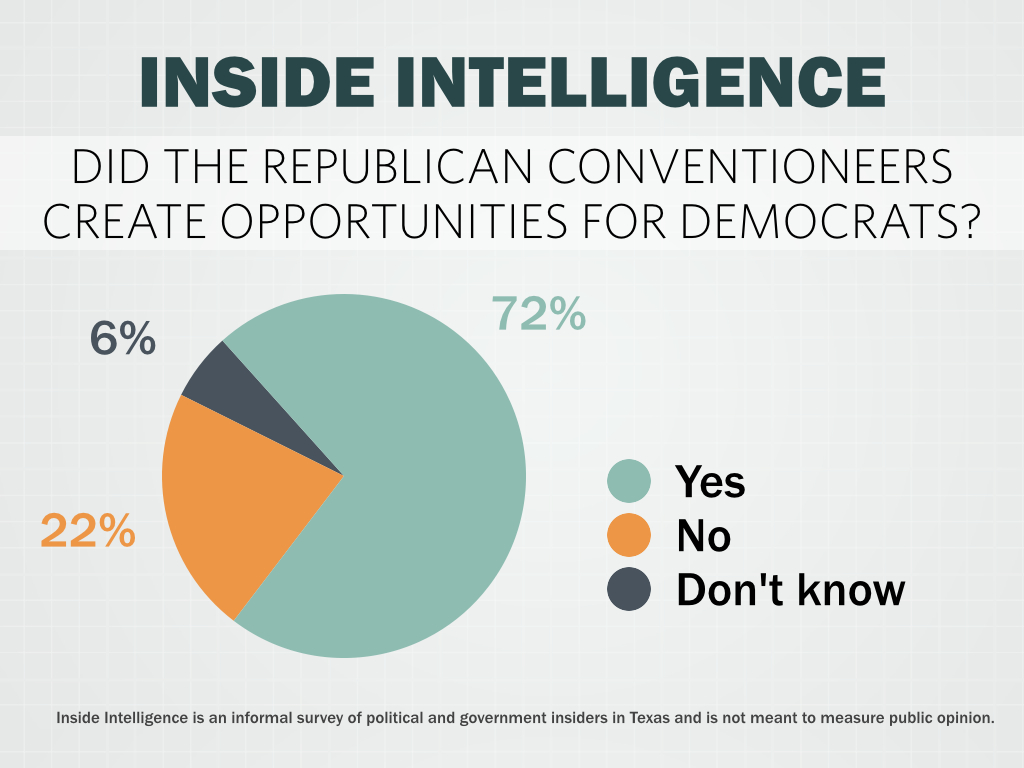 Did the Texas Republican conventioneers create any political opportunities for Texas Democrats?

• "Just like Democrat convention creates opportunities for the GOP. The crazy right and loony left control the conventions."

• "They will not take advantage of them though. There is a huge opportunity for moderate D's to make headway for their party but the party is mostly run by party purists, Ann Richards dinosaurs and people slightly right of Lenin. Democrat incumbents are being criticized by other Democrats for taking money from donors that also contribute to Republican members. They have no chance this time."

• "Yes, but the opportunity is small. Like the number of democratic voters."

• "I'll be optimistic and say they did, but I don't think the Democrats realize how far behind they are in regards to voters. Texas has ALWAYS been a conservative state, even during the hey days of the democrats, but that party has yet to adapt to the changing ways of our political state."

• "No one pays any attention to state party conventions except the reporters paid to attend them and the true believers who pay to attend them. Next topic, please."