This week, the insiders focused on Texas Republicans, starting with their assessment of which group dominates the Party. Social conservatives led the list among the government and political insiders, followed by grassroots and then fiscal conservatives.

The Log Cabin Republicans, a group that advocates for gays and lesbians in the GOP, was denied space for a booth at the convention in Fort Worth; 87 percent of the insiders said the GOP should allow them to rent space.

Finally, we asked about the importance of party platforms to the voting public. Platforms make no difference, according to nearly three-fourths of the insiders.

As always, we have attached a full set of verbatim comments from this week’s survey. Here’s a sampling: 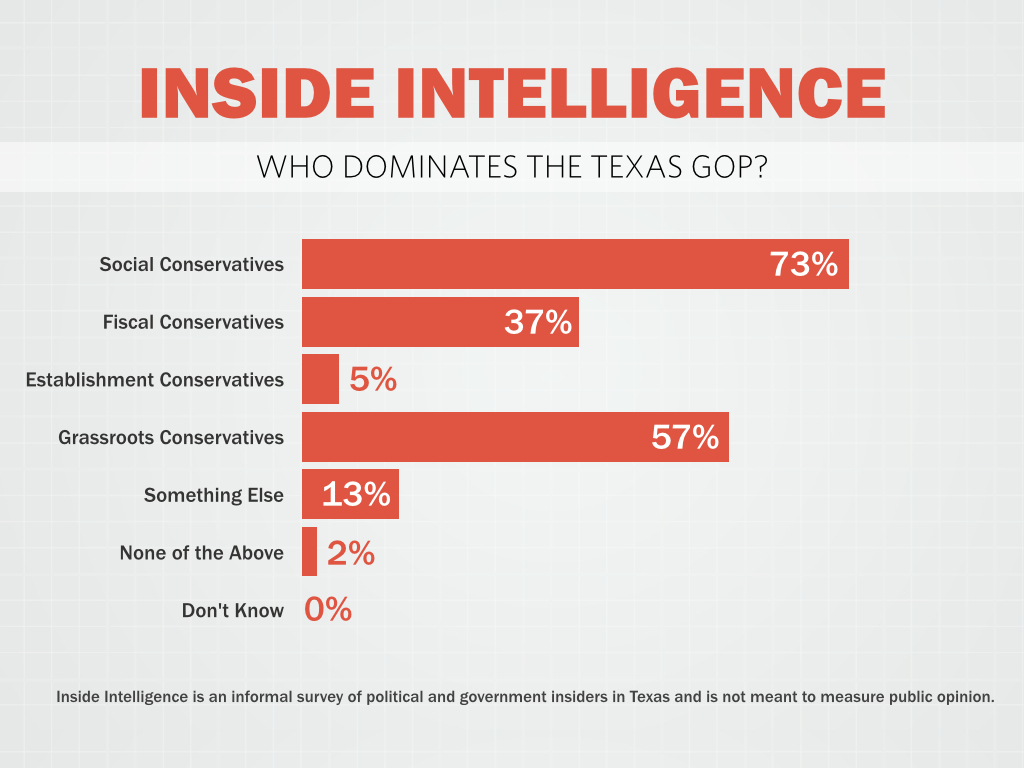 The Texas GOP is holding its state convention this week. Based on the primaries and the runoffs, how would you describe the dominant forces in Republican Party politics in Texas right now? [Check all that apply]

• "When the candidates for Ag Commissioner have to come out in support of traditional marriage (one heifer for every bull?), and property tax reform, I think it's clear who's running the show."

• "If you look at the statewide winners it will be clear that the 'abortion issue' played a significant role in who emerged from the crowded fields."

• "All of the first four are well-represented, though the establishment conservatives are a bit stunned at their loss of historic control."

• "Combination of fiscal and social. People just tired of government." 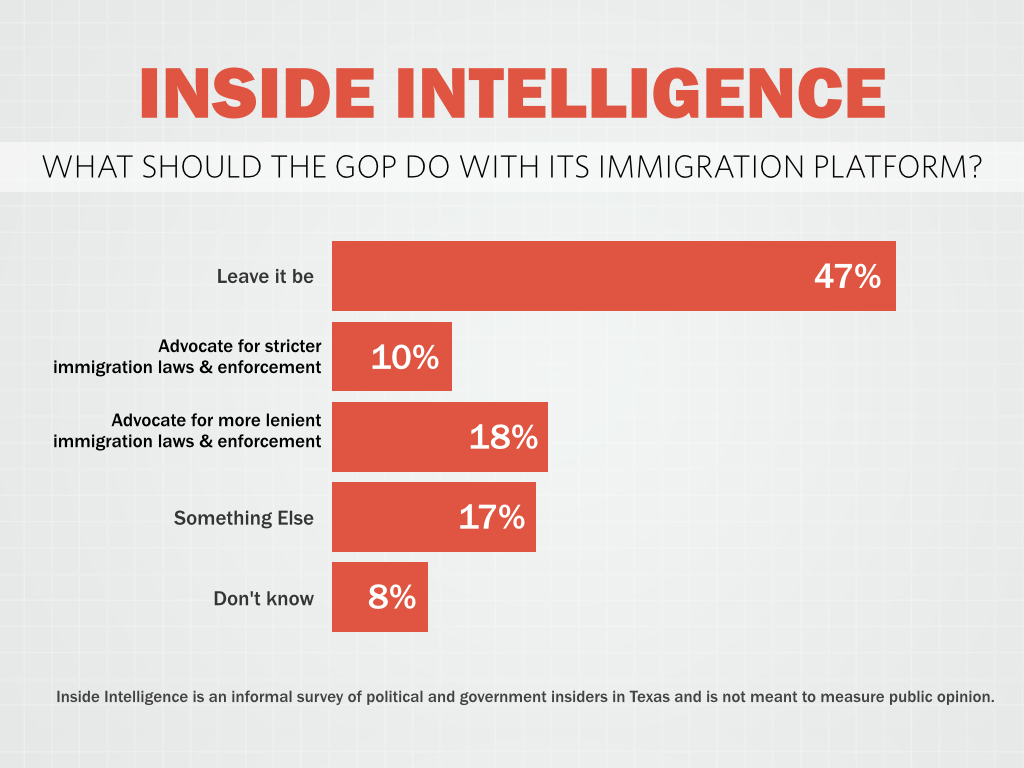 Republicans are expected to debate their immigration platform at the convention. What would be the best outcome?

• "The surest way to undermine the party's state-wide dominance is to backtrack on the current immigration plank."

• "Best outcome for whom? The Democrats are of course hoping for a series of Patrick Buchanan you tube op moments of gun waving, race baiting lunacy to galvanize the sleeping minority majority, and the Y and X gen- ambivalents, (however futile.)"

• "Best outcome for whom? For Dems, the best outcome would be a platform of stricter immigration law and enforcement--the better to drum the Republicans. For Republicans, it would be to leave it as is--the better to appear to be solving a problem and not creating huge divides and tension."

• "A hybrid approach supporting strong enforcement measures, coupled with a guest worker program (without citizenship) to fill some jobs we don't want to do, such as agriculture jobs, construction, landscaping, and service industry jobs would the most pragmatic resolution. Realistically, I do not see this version of language gaining enough support of the delegates attending this week's convention in Ft. Worth." 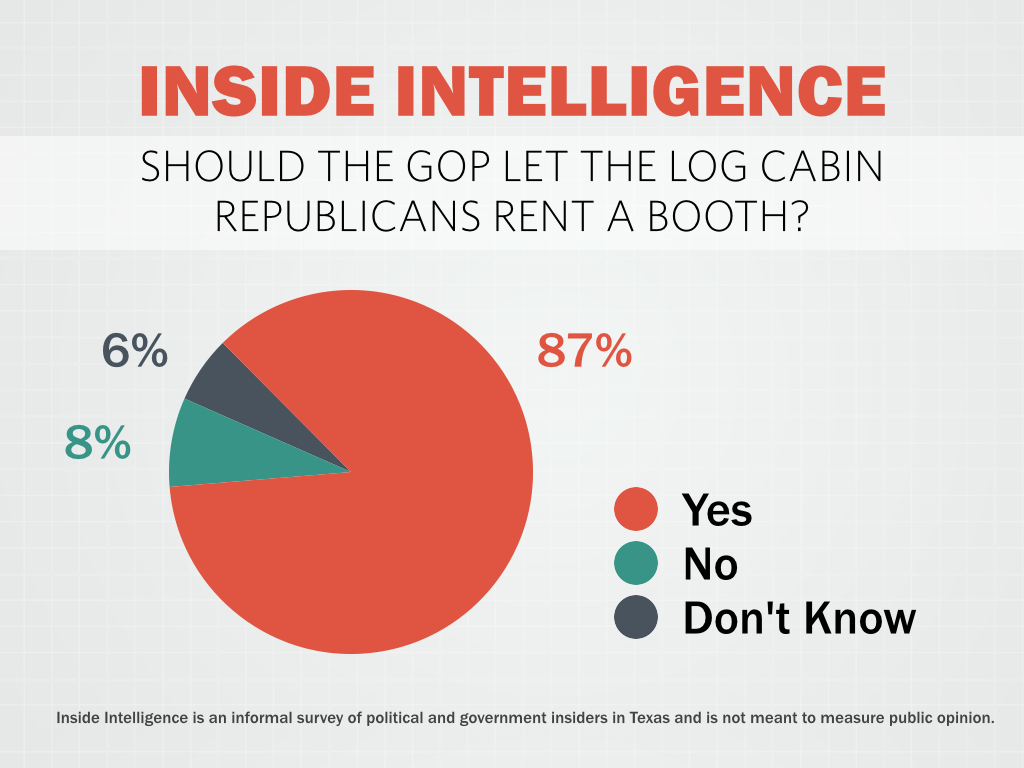 Should the Texas GOP allow the Log Cabin Republicans, a group that advocates for gay and lesbian rights, to rent a booth at its convention?

• "Republicans believe theirs is the party of the better ideas. They should not be afraid to test that in the marketplace."

• "The GOP should be supporting civil unions and protecting the definition of marriage. These are two different things. The party is alienating the only conservative group that can spread this message."

• "Few will stop by, but yes, allow them. To disallow them will hurt the GOP more than it hurts."

• "They should allow for symbolic purposes. By not allowing it, they clearly indicate that their tent is closed. It may give them one more election but ultimately, it will hurt."

• "You might not agree with them but why act like the fascists on the left and completely shut out another voice on issues."

• "They can decide to do whatever they want." 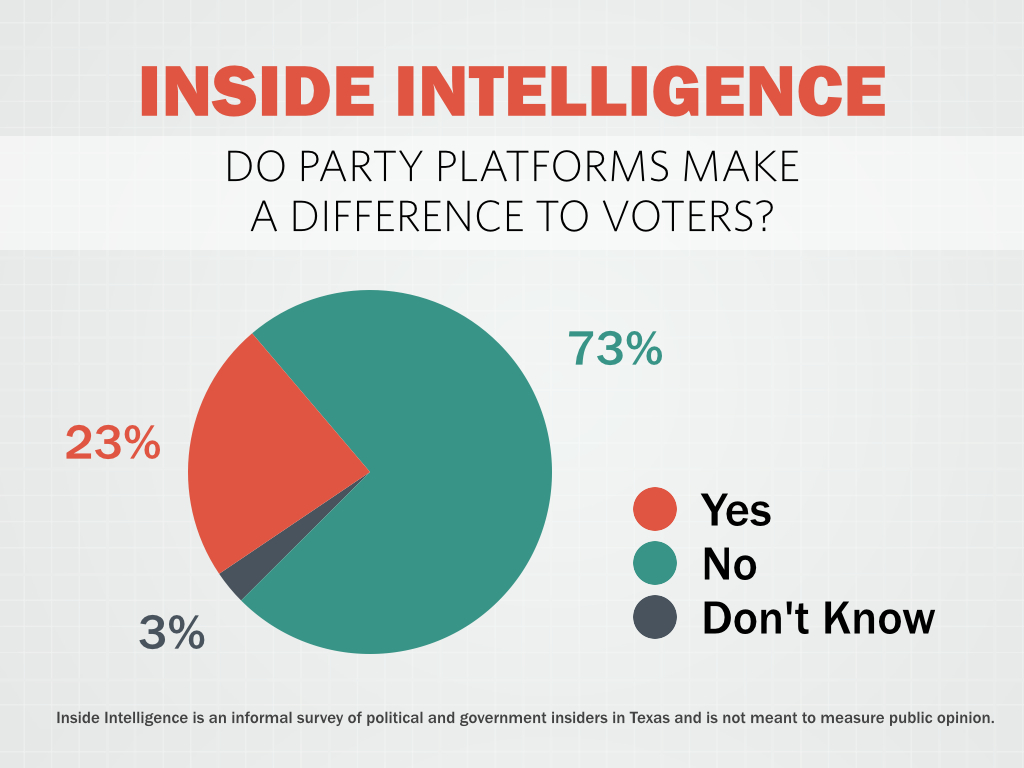 Do political party platforms make any difference to the voting public?

• "Candidates invariably must emphasize the key points of the platform. THAT affects what voters think of the GOP."

• "Platforms matter only when their contents include examples of rank extremism - AKA the Texas GOP Platform."

• "Voting public??? Only those that care about party platforms vote anymore."

• "To most voters, no. No one even reads those silly platforms. And once elected, few legislators give them much weight."

• "Platforms are developed by the diehards - and then quickly forgotten."

• "Of course not. Second-biggest waste of time in politics (next to legislative interim hearings). But it gives the party apparatchiks something to do and it gives them a (false) sense of importance, so platforms serve a purpose for the officeholders that need the apparatchiks' support come election time."