On the morning of the primary runoff election, we asked our insiders in politics and government about turnout — specifically, about what the long 12-week break between primaries and runoffs does to turnout.

It decreases it, according to 77 percent of the insiders.

The insiders were nearly unanimous in saying that primary voters are not representative of the general election and “occasional” voters from their own political parties.

We also inquired about the latest presidential appointment, with San Antonio Mayor Julián Castro being tapped for U.S. secretary of housing and urban development. Will it help him if he runs for state office later? No, according to 66 percent of the insiders. Does it help his chances of getting on a national ticket? Yes, according to 74 percent.

We collected remarks from the insiders and have attached the full set. Here’s a sampling: 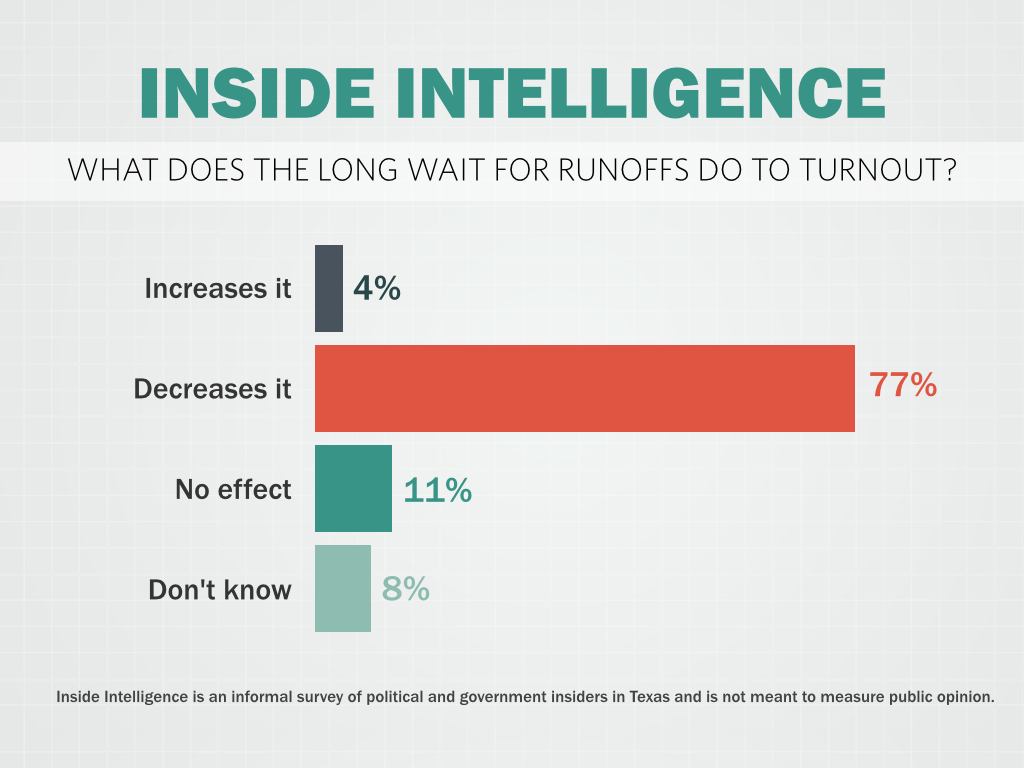 Setting aside what is on a runoff ballot, what effect does the long spell between primaries and runoffs have on turnout?

• "After 6 months of the slog, all but the most rabid party faithful have tuned it out."

• "It's a given that fewer voters come out for the runoff. However, the amount of attrition depends on who the candidates are and what they do with the time (see, e.g. Ted Cruz)."

• "The numbers don't lie--turnout is decreased."

• "In this case, the unusual negativity of the runoff campaigns seems to have depressed expected turnout. That doesn't have to be the case every time, however."

• "People will vote if inspired. There is nothing inspiring about this ballot. No Cruz this year."

• "Having elections around Memorial Day hurts" 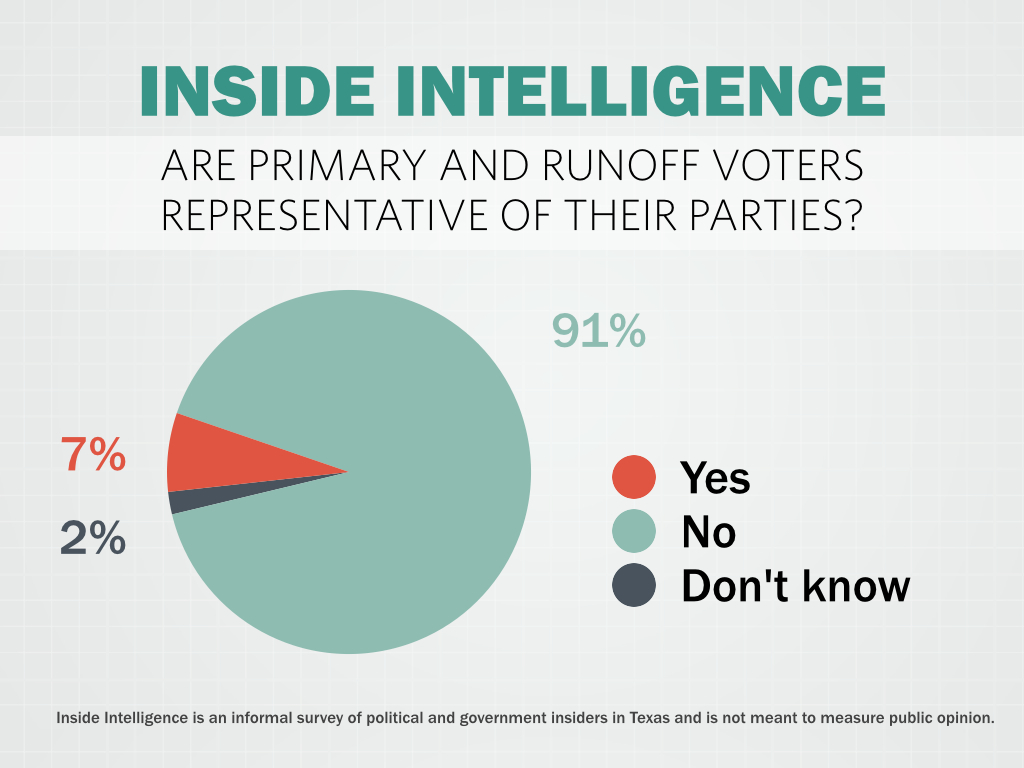 Are the voters who turn out for party primaries and runoffs representative of general election and other ‘occasional’ voters from their parties?

• "No. Primaries are party elections where party loyalists make the key candidate decisions. By the time you get to the general election, everyone who skipped the primaries is stuck with a take-it-or-leave-it decision...or simply stay home - which ends up working in favor of each party next election cycle."

• "Is an AA meeting representative of the general drinking public? Both party primaries function at the pleasure of their extreme voters."

• "Primary voters are the most motivated and loyal of each party's base. Runoff voters even more so. They define a party's true agenda."

• "They are party purists. Not in any way representative of the larger general election population." 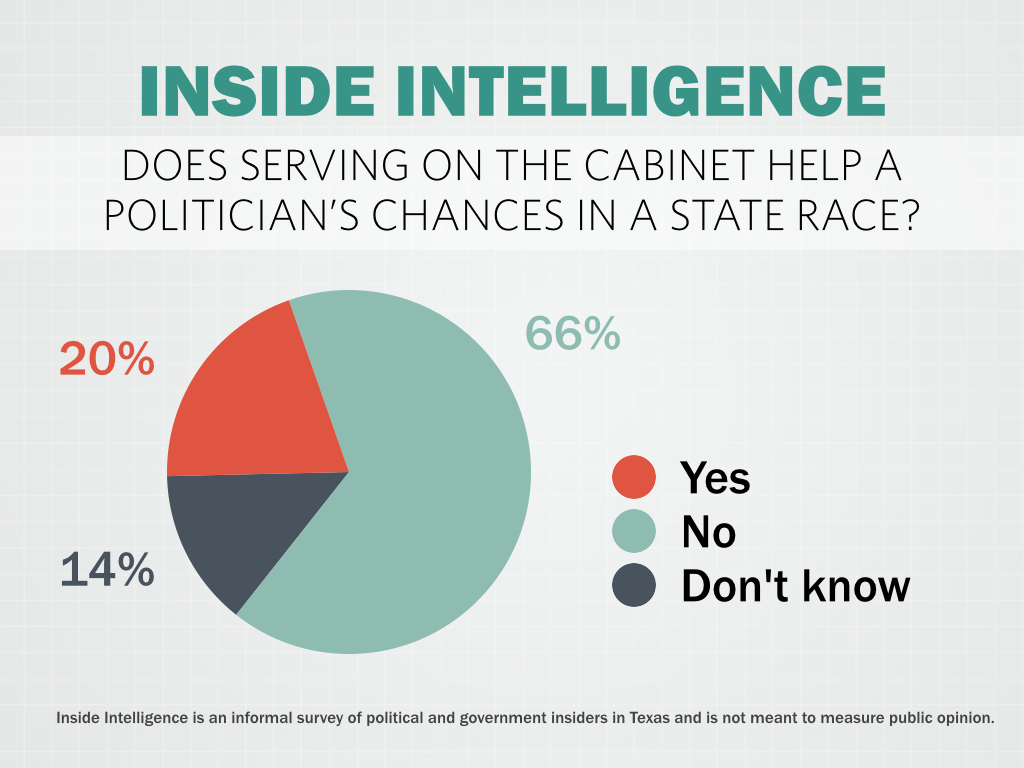 Does serving on a president's cabinet improve a Texas politician’s chances at winning a statewide election?

• "Generally not, but it depends on the president and the cabinet role. Julian is a star and his trajectory will continue to rise because of his appointment."

• "Depends on the President and the role. But, Obama's cabinet? Um, that would be a NO."

• "San Antonio mayor heads to Washington to serve as HUD Secretary with hopes of returning to Texas to make a big splash. Haven't we lived this before? Remember how that one ended?"

• "Why would it? Can't think of example one in my lifetime."

• "Whichever Castro brother is joining the Obama Administration will have a better shot at being tapped for V.P. than being elected Railroad Commissioner."

• "Not for this President in this State. In fact, it decreases chances."

• "When has this ever worked?" 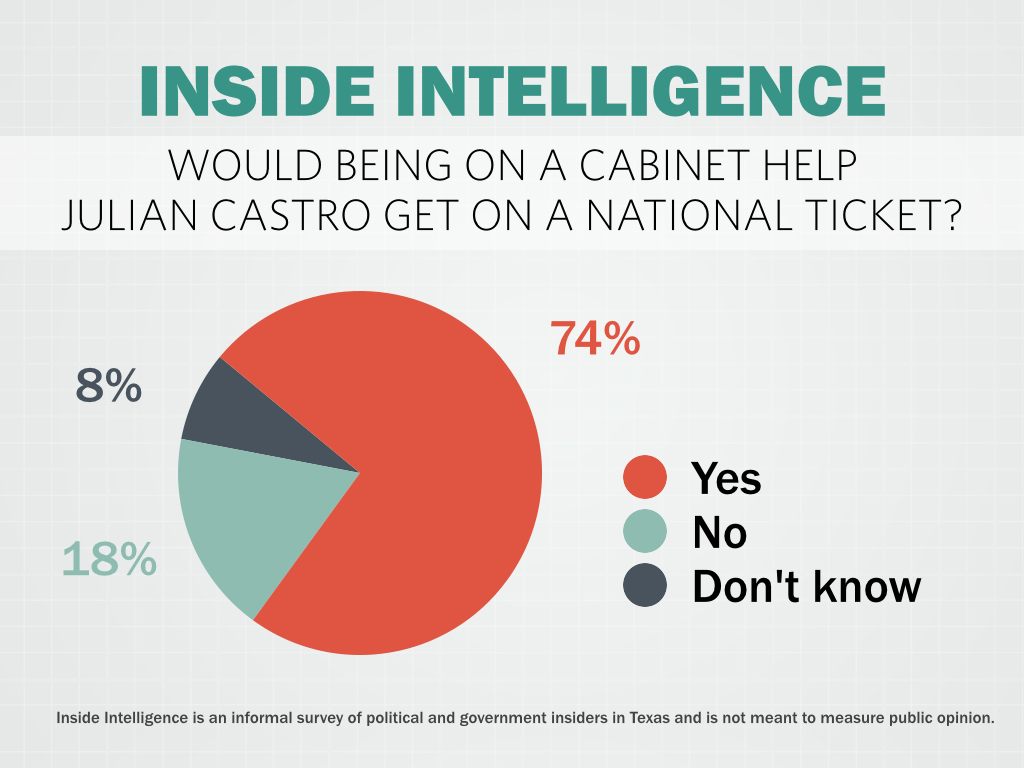 Would having a position on the Obama cabinet increase San Antonio Mayor Julian Castro’s chances of being on a national political ticket?

• "Although this gives the mayor national credentials, Hillary’s pick should be a senator or governor."

• "If he were being nominated for Secretary of State, then yes it would. But, HUD? No it does not."

• "It might increase Castro's chance of being on a national ticket, but it wont increase the chance of the Ds carrying Texas. Outside of San Antonio, no one knows who either Castro is."

• "Will give Castro national access to the wealthy Obama mega donors and corporate lobbyists."

• "Maybe. It all depends on the political calculus at the time of the race. The cabinet is far more often a political graveyard than a stepping stone."