If our government and politics insiders are right, the statewide candidates who finished second in the March 5 primaries but made it into runoffs are not in for a good week. None of those candidates has convinced a majority of the insiders they will win the May 27 runoff. Republican Dan Branch, with 41 percent, and Democrat Kinky Friedman, with 33 percent, came the closest. Most, however, are betting on the first-place finishers to remain in front.

Do the nasty fights for some of those nominations open the door for Democrats? Mostly not, but 60 percent of the insiders think the Republican lieutenant governor’s runoff between incumbent David Dewhurst and state Sen. Dan Patrick could put that contest into play in November. Nearly a third said none of the runoffs will increase Democratic chances.

We also rechecked to see whether the insiders think the Democrats — who haven’t won a statewide election in Texas since 1994 — will win one this year. Nearly half said no to all of them, but 41 percent said the lieutenant governor’s race is a possibility. No other contest broke 15 percent.

We collected comments along the way and a full set of those is attached. Here is a sampling: 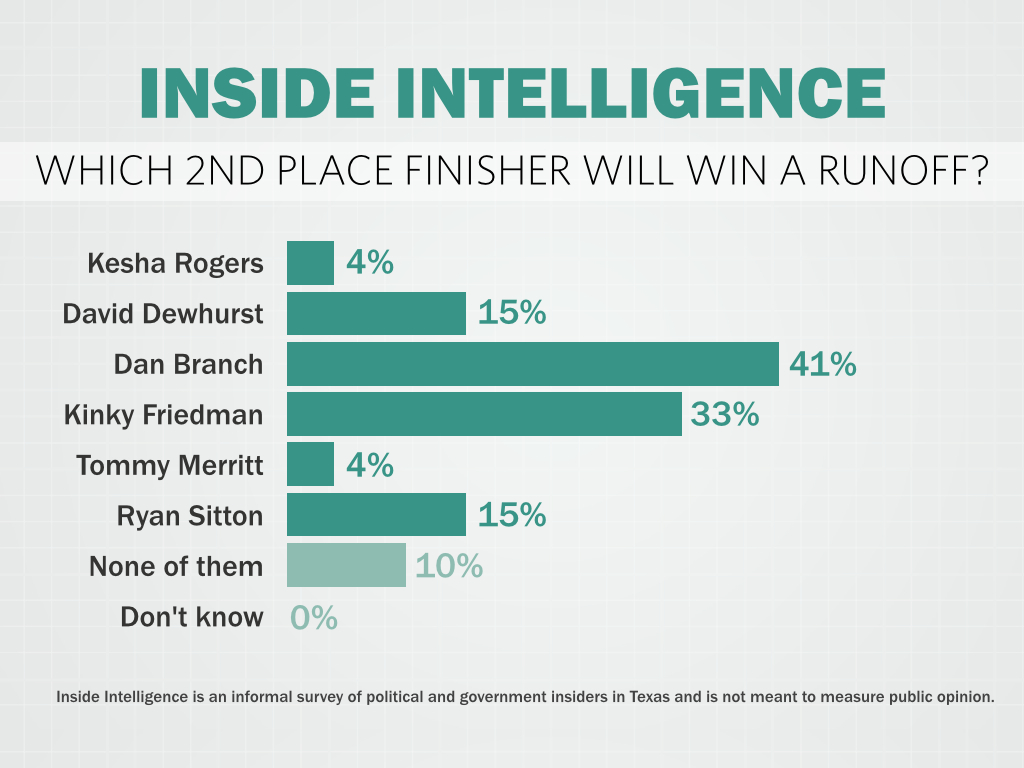 Each of these candidates finished second in March, but made the runoff. Which ones do you think will win their runoff?

• "None and it does defy conventional political wisdom that the second place in the first round has the advantage in the run-off. Political Science professors will be scratching their heads to explain this one."

• "Rare year in the R primary that none of the 'second place with a bullet' guys is going to win. Look what they all have in common and how much things have changed in 4 years.... the insurgents are becoming the establishment (that ought to scare the hell out of them!)."

• "Paxton's ethical baggage should be enough to knock him off, but just barely. Sitton is emerging as the most qualified of the 2 RRC candidates left on the ballot."

• "That'll make it an incredibly fun ticket to watch." 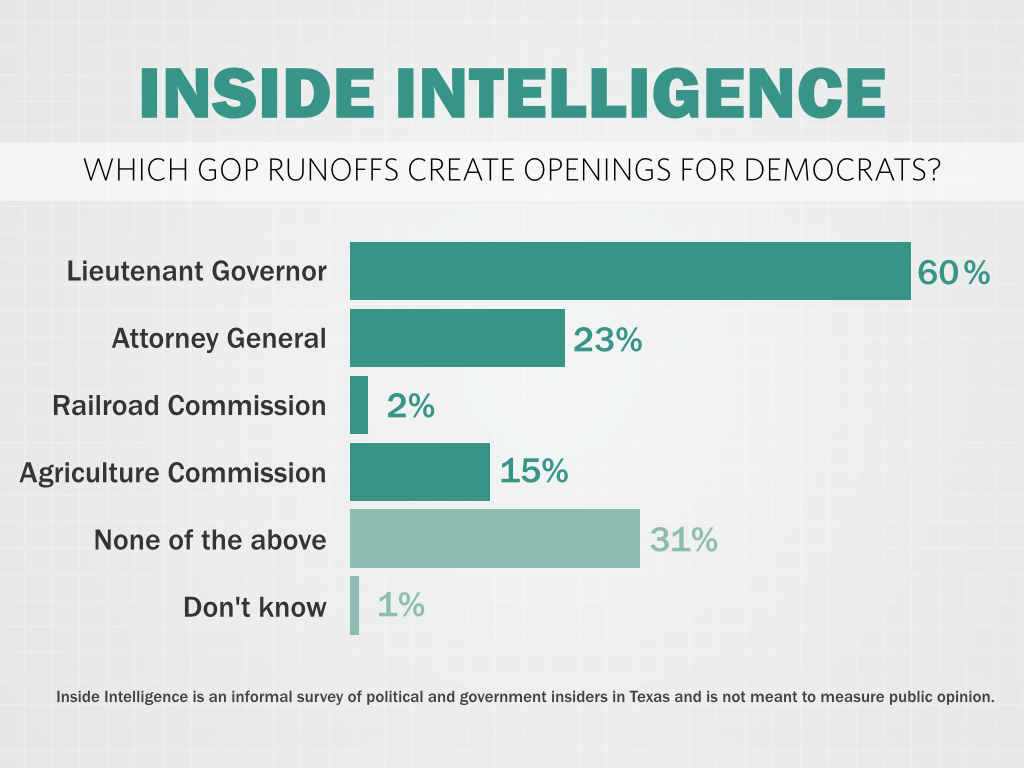 Do any of the primary runoff battles on the Republican side of the ballot create an opening for Democrats in the general election?

• "If the smoke in the Paxton story is real fire, then that could be an upset."

• "Van De Putte over Patrick is all the buzz, but its not going to happen. Sen. Van De Putte's platform and views do not represent mainstream Texas and she's been trash talking to the left wing for so long, she probably doesn't even know it."

• "An opening doesn't mean they can win. Just allows gap to close some. GOP candidate would have to stumble."

• "If it is Mr. Patrick versus Ms. Van de Putte, lots of switch over vote in November. Not nearly enough, though." 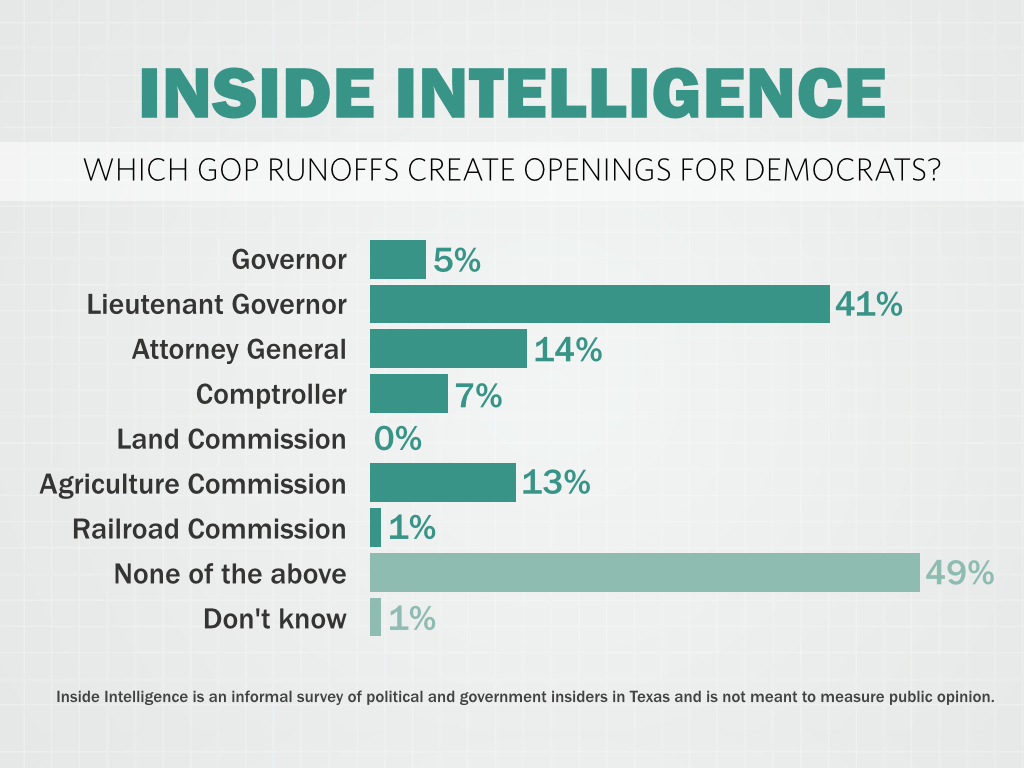 At this point in the election cycle, do you think the Democrats can beat the Republicans in any statewide non-judicial races?

• "'Can' is the operative word . . . not ready by any stretch to say 'will'. November is a lifetime away at this juncture."

• "Virtually every race will have a ten-point advantage for the Republican candidate."