This week, we asked the insiders about campaigns, and about what might be persuasive to voters in this month’s primary runoffs.

Ideology trumped everything else, getting a mention from 87 percent of the insiders, followed (distantly) by candidates’ political records, personal histories and incumbency.

We collected verbatim comments along the way and those are attached. Here’s a sampling: 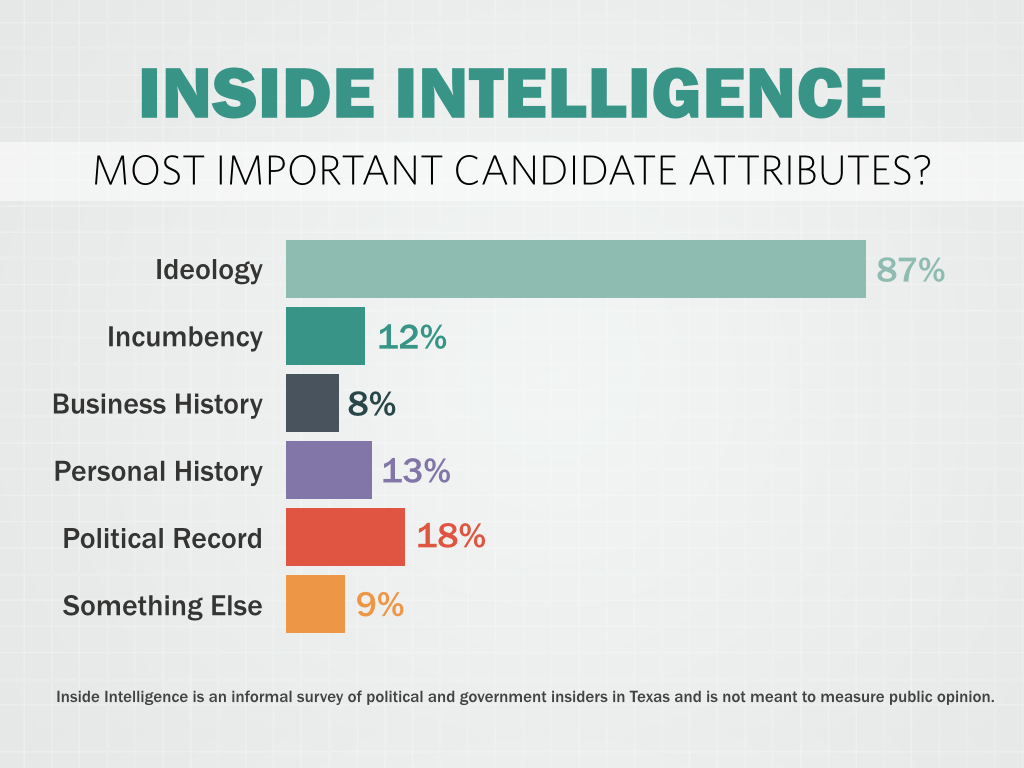 Which candidate attributes will be most persuasive to voters in the May runoffs? (Choose all that apply)

• "Incumbency can be a blessing or a curse. Motivated voters turn out, making ideology a key to a low turnout runoff."

• "Voters today rely on slate cards and other lists compiled by those they agree with. If political record mattered there would be fewer incumbents like Dewhurst, in runoffs!"

• "These are the diehards that are voting. They know if you've been naughty or nice on their issues from your statements to your past votes."

• "Perception is reality, so I guess the difference will be 'perceived' ideology - not actual policy or voting differences."

• "I'm amazed how far voters have gone away from caring about candidates community, business and public service involvement. Too many voters only care about how much candidates froth at the mouth when they speak." 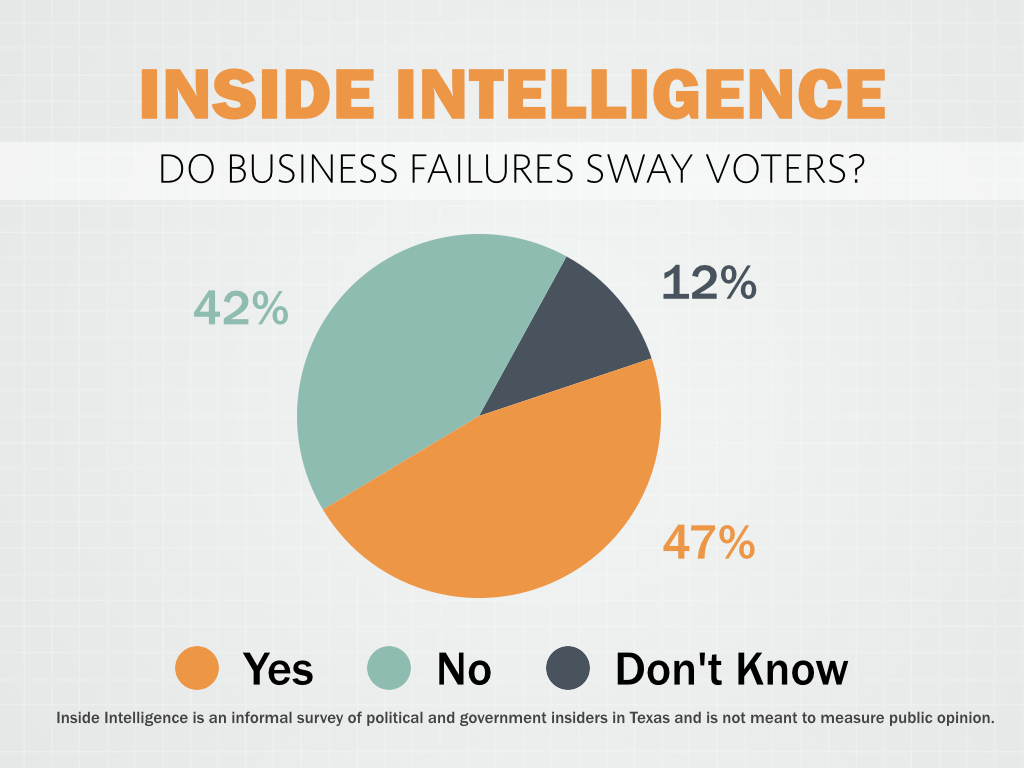 Are voters swayed by attacks on a candidate’s business failures late in a campaign?

• "Any late-breaking negative attack can be effective if it calls into question a candidate's fitness for office."

• "It looks a little desperate. But there is probably good reason for that desperation."

• "Texas was founded on second chances. I think most folks are willing to forgive business failures--many remember the 1980s and the harsh lessons we all learned."

• "No. Everyone goes through ups and downs in business, or know someone who has."

• "It depends on the issue and the issue must be more than just being unsuccessful."

• "Better question is whether the voters who will vote in the runoff and are committed to a candidate (i.e., the only ones who will bother to vote) will be swayed. The answer to that question is no. If what you asked is right...whether voters in general going to be swayed, I’d say probably, but they aren't going to vote in this runoff." 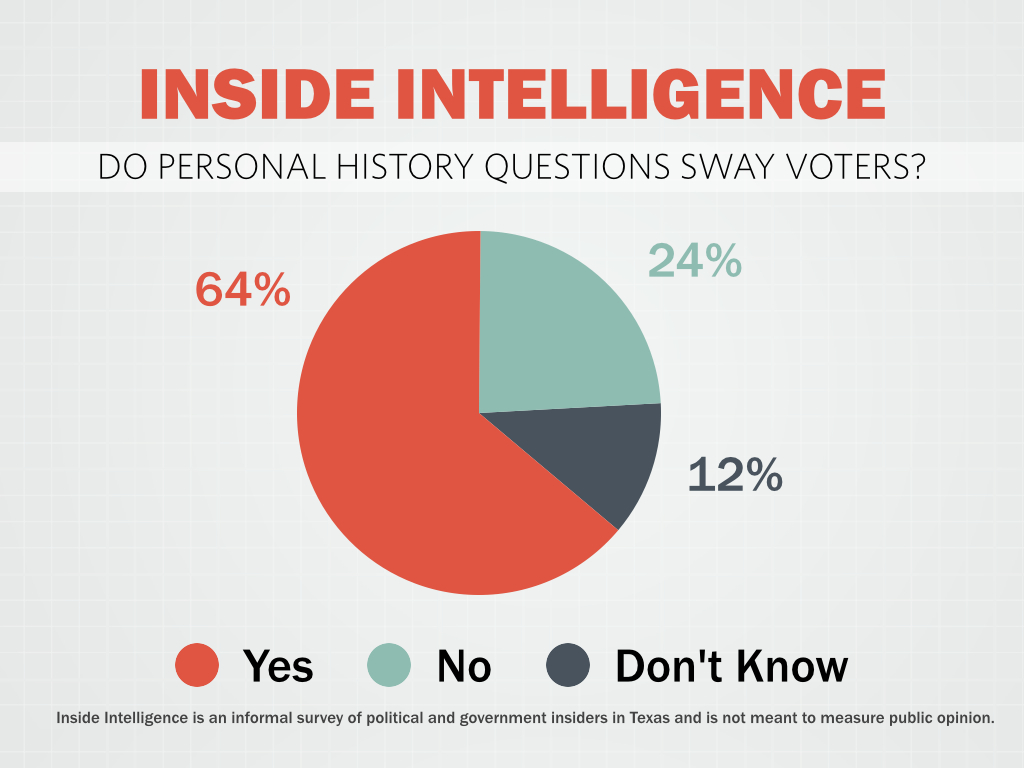 Are voters swayed by attacks on a candidate’s personal history late in a campaign?

• "Non-traditional sources of information seem to be lessening these types of attacks."

• "If the attacks are true, then yes. After all, didn't we learn early on in life that a leopard can't change its spots? It used to be that if you can't out-drink the other fella, take his money at cards, and sleep with his girlfriend, then you didn't belong in Texas politics. Nowadays, if you engage in some or all of that stuff, then you don't belong."

• "They can be, but the later it comes, the more scandalous it has to be."

• "Since you're referring to people who have already been elected multiple times it's hard to see why it would matter now."

• "It's too late. Voters have picked their teams and in at least the Lt. Gov. primary run-off there has been very little presented that isn't re-hashed from the general primary election. If voters weren't swayed then, they won't be now. In the lower ballot races, the only people paying attention are those who have picked their teams already - making it almost impossible to gain traction."

• "Maybe. Is it information that is new to the voters, is seen by them as credible, and is serious enough to shake their faith in the candidate being attacked? A lot of the mud flying around right now isn't serious enough to make a difference and/or isn't being believed." 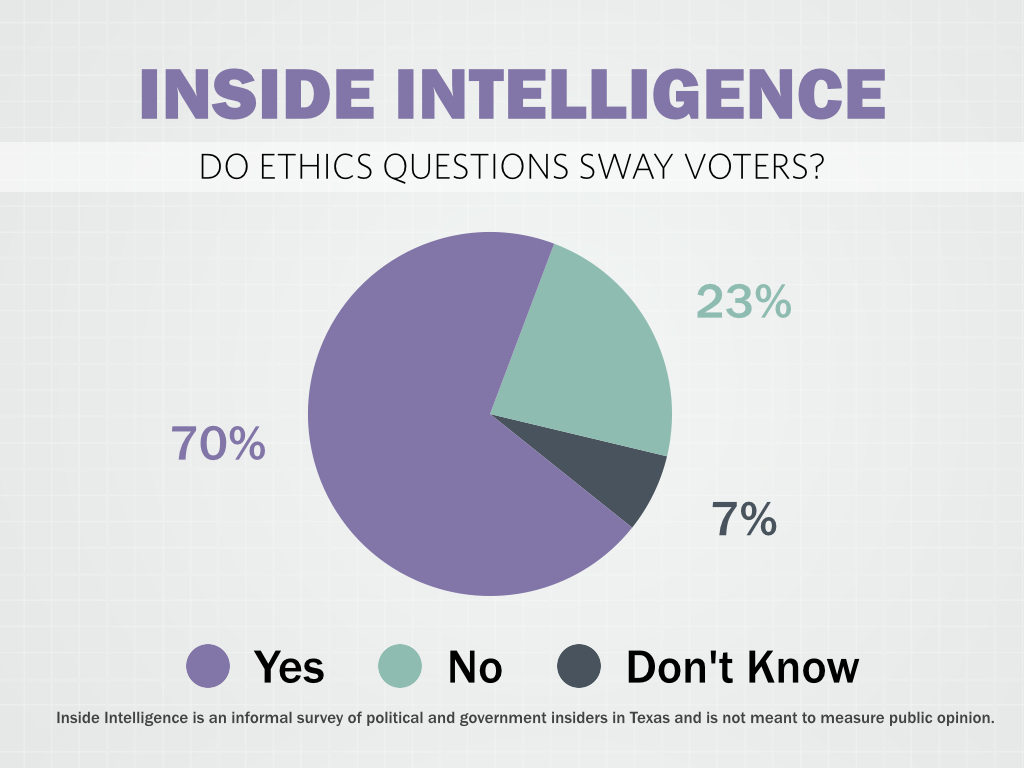 Are voters swayed by attacks on a candidate’s ethics late in a campaign?

• "Paxton's run for AG is the case study of this question. Stay tuned...."

• "There's a reason nobody likes or wants the 'unethical' tag--the voters don't like unethical politicians."

• "I think it works if the ethical challenges are legit and not speculative. There has to be more than just smoke at this stage in the election."

• "Most voters think all politicians are corrupt."

• "Where is the answer choice for, 'it depends?' Regarding Paxton, he certainly has time to recover and he seems to be taking some of the necessary steps. But if Paxton mishandles it, it could be fatal. Regarding Sitton, his too-little-too-late efforts aren't the issue because he doesn't have the votes (ethics problem or no ethics problem)."