Tax appraisal notices are going out to property owners across Texas, so we asked the insiders in government and politics this week about the state of that system.

Are the resulting taxes fairly balanced? Homeowners pay too much, according to 59 percent of the insiders, while 8 percent said businesses pay too much and 20 percent said the shares paid by the various types of property owners are about right.

We gathered comments along the way and a full set of those is attached. Here’s a sampling: 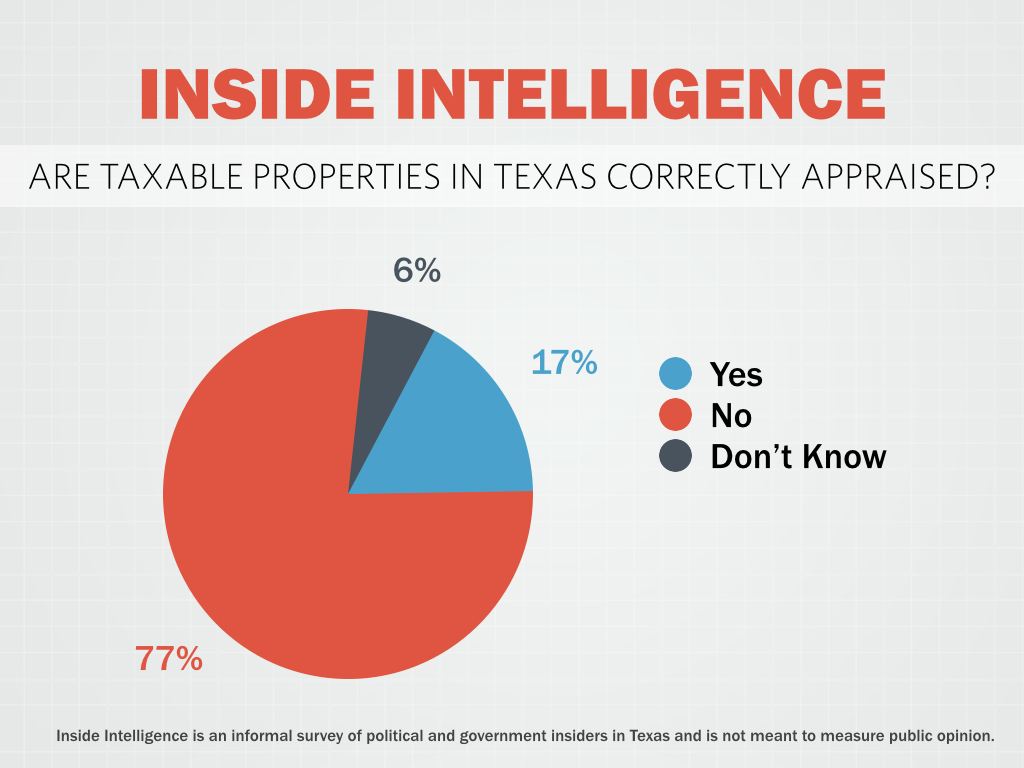 • "Surprise! Texas has, by far, the best property tax system in the nation. The Peveto bill reforms of the late 1970's are still a distant dream in other states. Anger at the appraisal system is inaccurate and misplaced. Although voters may not understand it, the real source of almost all of their anger is one or more of: 1) the Lege's decision to rely too heavily on funds from the property tax (thus making the bills too high), or 2) misinformation (intentional or not) from elected officials about how the tax works, or 3) hatred of any property tax."

• "Without mandatory sales-price disclosure, appraisal districts are flying blind. It's easy to find out what subdivision homes are selling for, but high-end residential and commercial/industrial get away with murder."

• "Give us a sales tax rather than a property tax. Having the government hold sway over property at any level is bad. Property taxes artificially inflate home values and means the government essentially owns my property with me"

• "Wide variations from place to place. Commercial properties are often under-assessed because owners can afford to hire professional help to reduce assessments."

• "Business property, especially at the top end, are under appraised. That's what it means to be a business-friendly state."

• "Goldilocks - some too high, some too low, some just right."

• "Very few people would be happy about selling their property for what it is valued at on the tax rolls!"

• "Why not sales price disclosure on all transactions?" 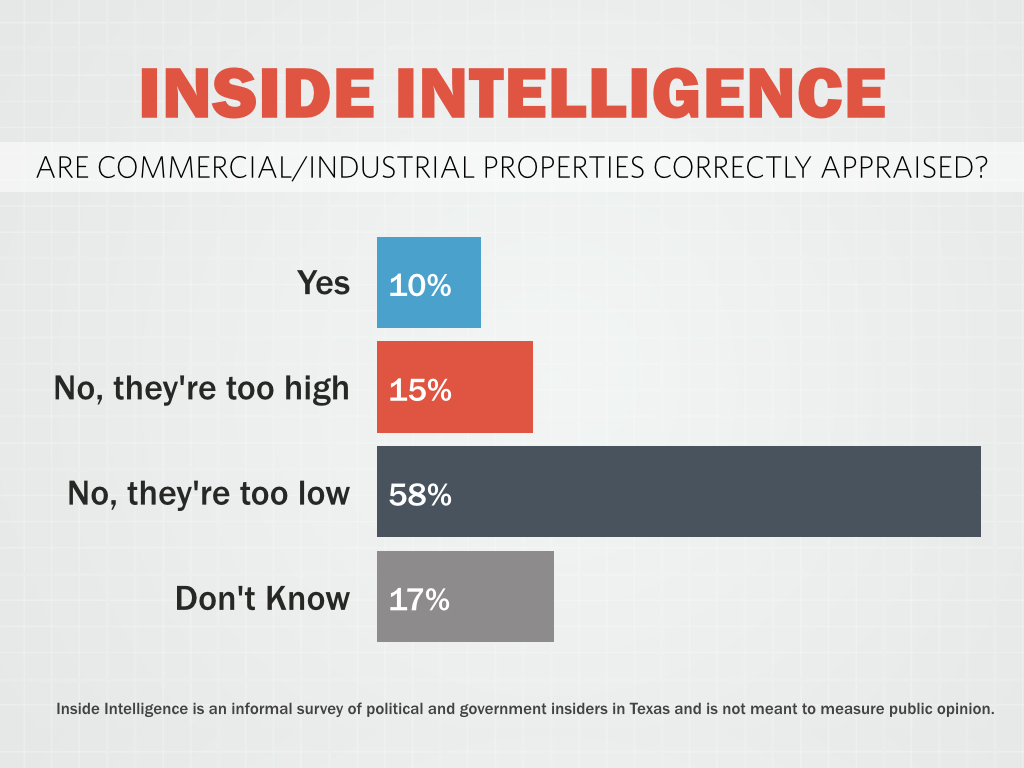 Are commercial and industrial properties on the tax rolls at their fair market values?

• "It's amazing what a tax attorney can debate with the right funding."

• "Commercial properties are definitely under-appraised, shifting more of the tax burden onto homeowners."

• "Appraisal is a process and not a judgment etched in stone. Chief Appraisers have substantial tools to value these properties--and residences, as well; all taxpayers have constitutional guarantees that properties will be appraised at value and that values across the spectrum of taxpayers are equal and uniform. This is the best process we have developed to assure 'correct' values."

• "If they were even appraised at construction value we'd add billions to the tax base." 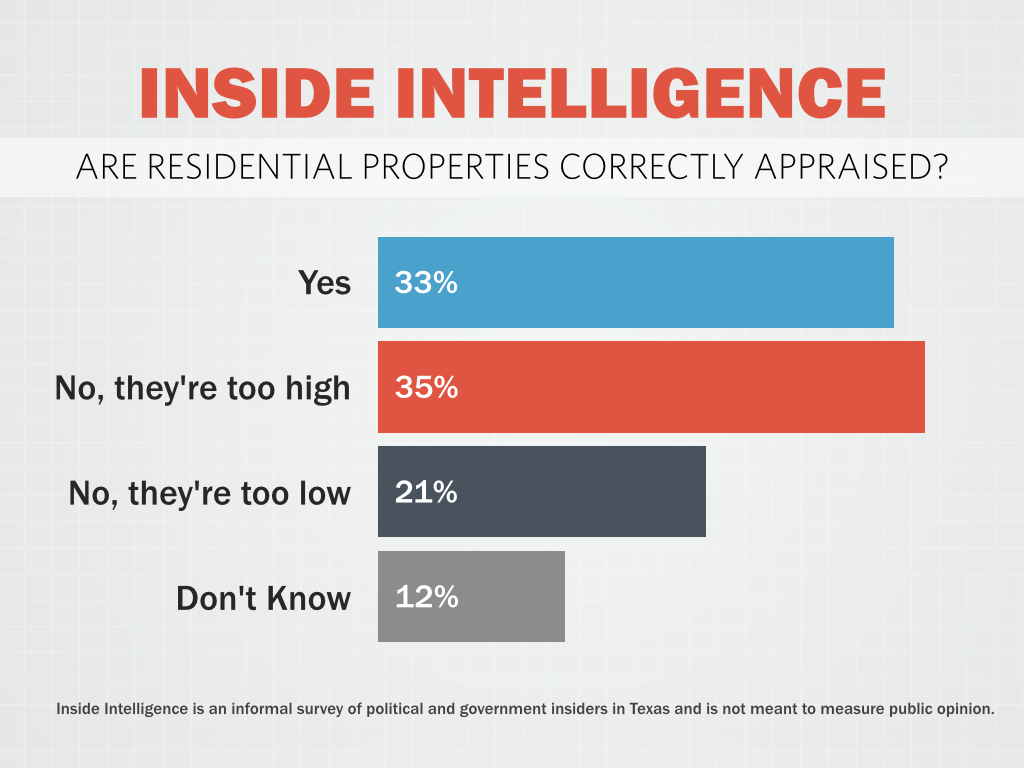 Are residential properties on the tax rolls at their fair market values?

• "Residential properties are low but they are consistent and proportional, i.e., both legal and fair. Cannot over emphasize that appraisal is NOT the issue. Appraisals are SOLELY a method for ALLOCATING taxes among payers. The AMOUNT of the tax is determined by the government collecting the tax (and not the appraisal district). If the tax seems too high, change the rate."

• "This varies widely from county to county."

• "Average middle-class homes are probably fairly accurately appraised, but high-end residences are undervalued because an appraisal district has no way to get the sales price when those houses turn over."

• "It really varies. No appraisal district does the same kind of job as another. Therefore, there is wide disparity in what are supposed to be equitable values."

• "The vast majority of homes are fairly appraised but the most expensive homes are undervalued because (1) as unique items they are difficult to value; (2) their owners can afford to contest valuation effectively; and (3) those owners have a great deal to gain by contesting valuation."

• "Each market is so different. But it's a slippery slope. High property taxes can drive homeowners from their homes particularly in markets that have had huge increases. It seems unfair that a tax district can price you out of your home." 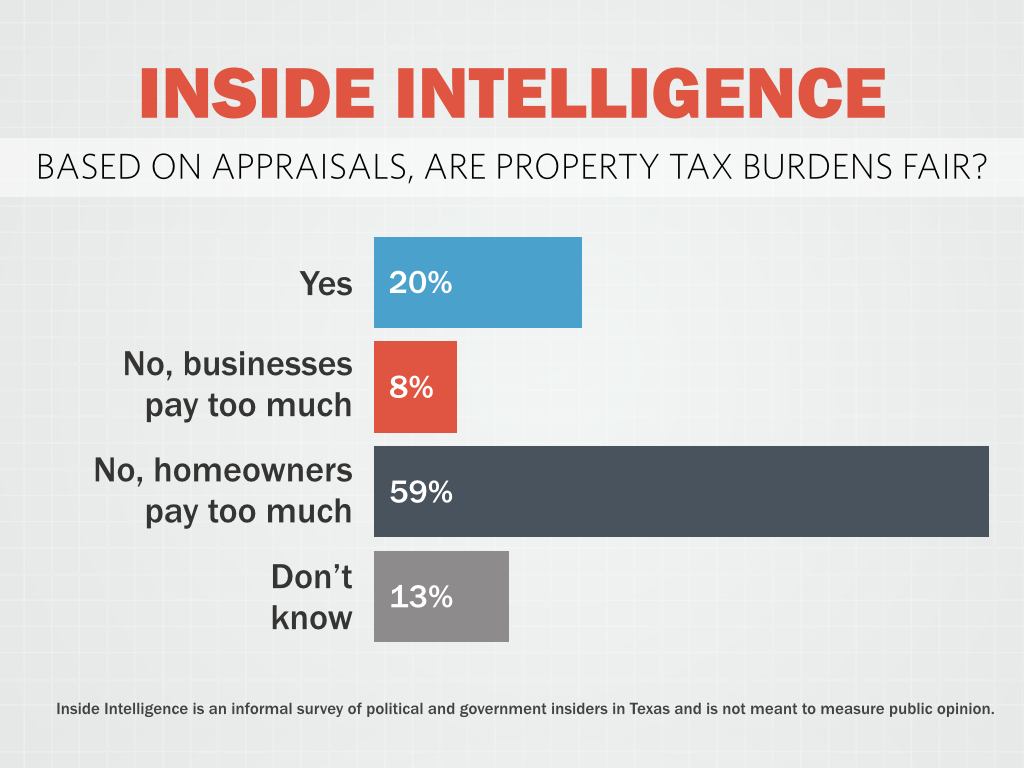 Based on their appraisals, do residential and commercial/industrial property owners pay their fair share of property taxes?

• "Generally yes, but the C&I 'equity' appeals are an abuse. Will more businesses rush to use this loophole? Widespread equity appeals will make the property tax voluntary like the old franchise tax was. In that case, because of the way school funding works, all of that lost tax revenue will hit the state's balance sheet much more than the local ISDs. By the time the problem gets large enough not to ignore, it will also be big enough to be very painful to fix."

• "Since commercial/industrial are on for a fraction of their true market value, the burden shifts onto residential. But protecting homeowners with lower appraisal caps or over-65 freezes just throws the system even more out of balance. You can't run a system that relies so heavily on property taxes without sales-price disclosure, then expect it to be fair."

• "There is always a tension in the system in assuring equity. The 'dirty secret' in Texas is that the legislature has over-relied on property taxes for education and local government finance and that over-reliance has substantially increased the tension. The legislature can force increases in local rates by inaction on other financing sources and underfunding mandates --and then blame local governments for the increases."

• "Homeowners are subsidizing the tax break business gets."

• "I'm a homeowner, not a business owner - of course I think homeowners pay too much."

• "All property taxes are too high. Until we go to a pure consumption tax we will just be paying taxes based on people's opinion"

• "They're both undervalued, but who can say for sure which side is paying too much?"