The insiders are split on whether it was wrong for Gov. Rick Perry to threaten state funding for a local prosecutor unless she quit in the wake of drunken driving charges. And they are split when asked whether Travis County District Attorney Rosemary Lehmberg should have quit to preserve the funding for her office.

A special prosecutor has taken complaints about the governor’s threat and subsequent veto to a grand jury for review, but nearly two-thirds of the insiders — 64 percent — say this is a case of hardball politics and not a crime. Will it have any effect on the governor’s political future? Most — 60 percent — said no. 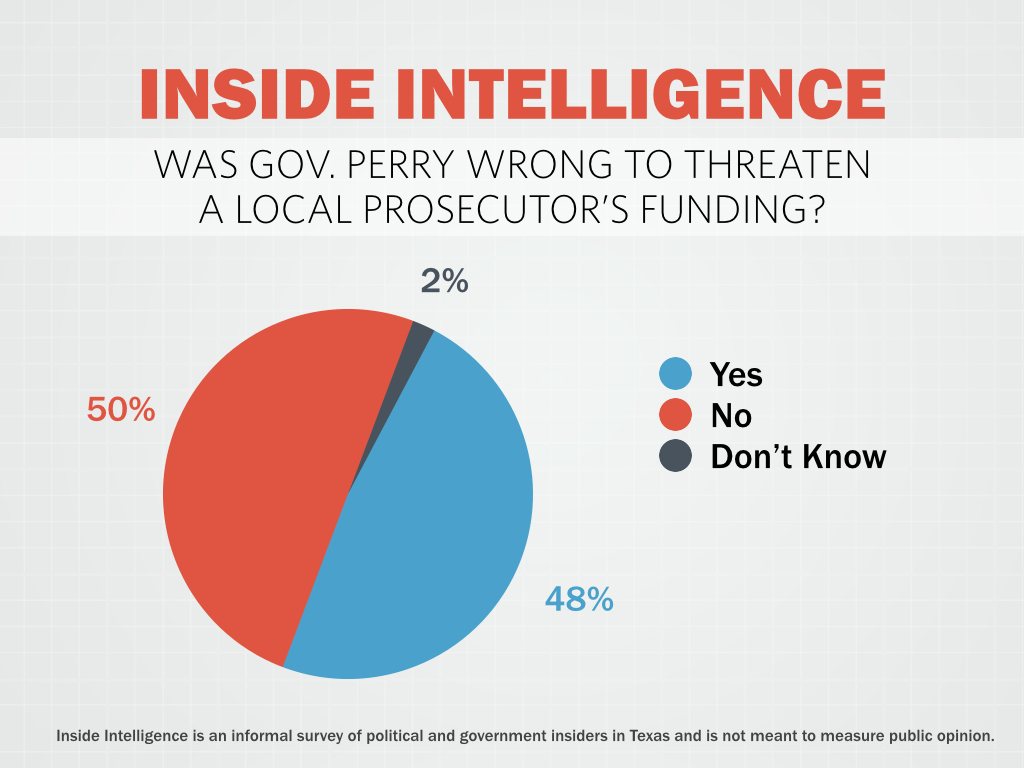 Was Gov. Rick Perry out of line when he threatened to veto funding for Travis County’s public integrity unit if District Attorney Rosemary Lehmberg didn’t resign?

• "It diminishes public confidence and is a disservice to our taxpayers to use state funds on an organization led by someone who is both a prosecutor and a convicted criminal."

• "Perry can veto for any reason or no reason. Besides weren't Republicans interested in getting the Travis County DA out of state wide public integrity?"

• "Did you not see the video footage? Or the mugshot bumper stickers on Mopac?"

• "If his actions were criminal then dozens of crimes are committed every legislative session. Although this issue has become a politically partisan one, there is sufficient basis for reasonable people to argue that Lehmberg should have been forced out of office by any leverage available. There is also sufficient basis for reasonable people to argue against the existence of the public integrity unit itself being housed in the Travis County DA's office. Perry will win in the court of public opinion on this one, everywhere except maybe Travis County."

• "'Out of line' doesn't really mean anything, does it. Certainly one would hope for better judgment in one's chief executive, but who's surprised. In any case, this is kind of what governors DO." 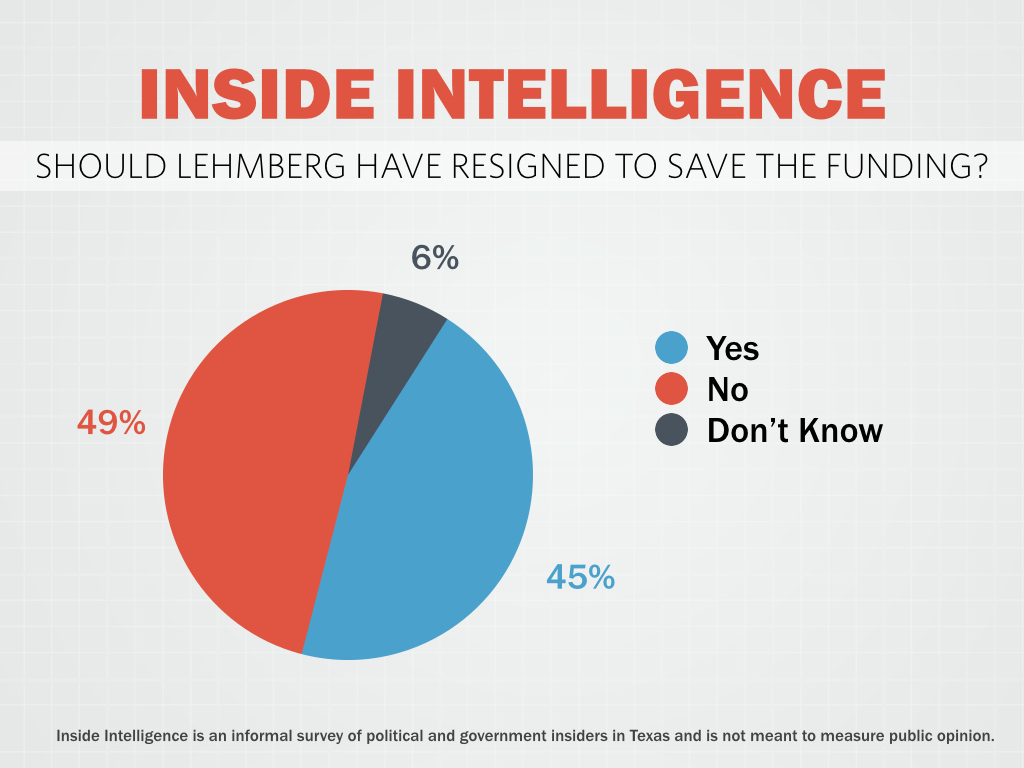 Should Lehmberg have resigned to preserve the funding?

• "Lehmberg's lack of personal integrity, her disrespect for the law, the fact that she threatened to fire the officers involved in her arrest and her conviction are just a few of the reasons she should have resigned."

• "She should have resigned because she failed the Mayor Rob Ford test of public integrity."

• "Lehmberg should have resigned because it was the right thing for her to do - not because of a veto threat."

• "Absolutely not. She should have resigned because of her loathsome behavior not because of political pressure." 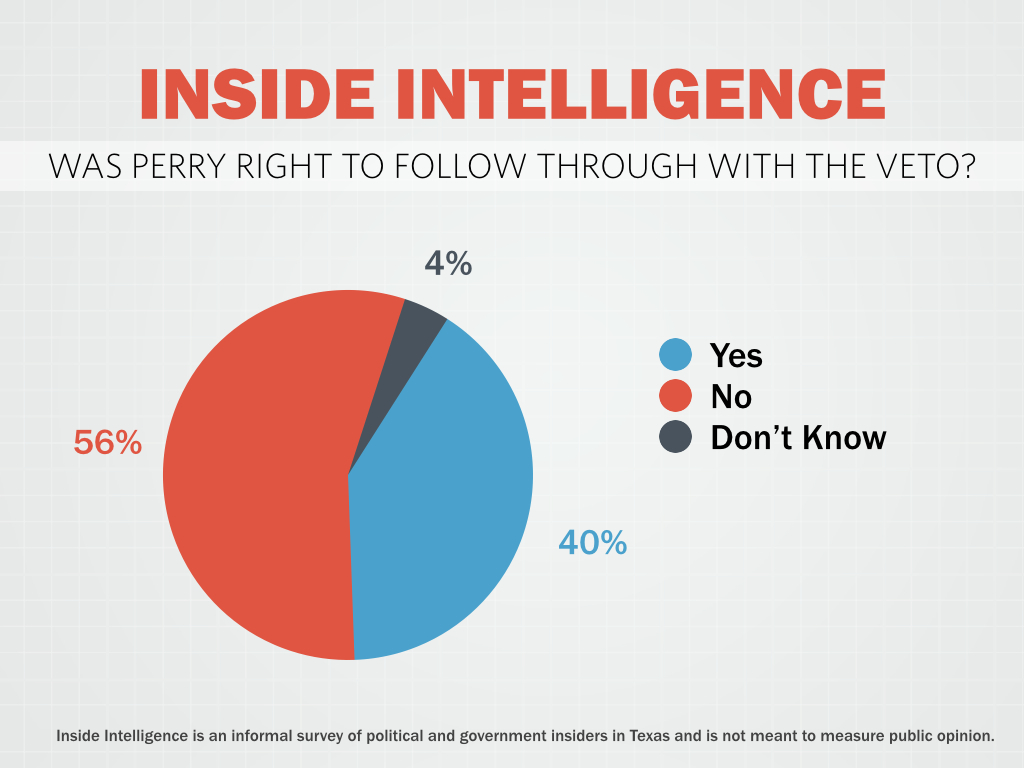 Was Perry right to follow through with the veto after she didn’t resign?

• "As the Governor explained when he took this action, the Public Integrity Unit is in no other way held accountable to state taxpayers, except through the State budgetary process."

• "It was within his constitutional rights to do so."

• "He would've looked weak if he had not followed through; all bark and no bite does not make someone tough."

• "Say what you mean and mean what you say. If he didn't follow through with his threat, his integrity would have been tarnished."

• "This controversy is yet another attempt by Democrats -- who cannot win at the ballot box -- to criminalize political activity by their opponents. It has a rich history in Travis County. Kay Bailey Hutchison, Tom DeLay and now Perry spring immediately to mind."

• "Not really a question of right. He had the political authority to veto the funding for the public integrity section Lehmberg's office and her behavior provided him the political opening to do so." 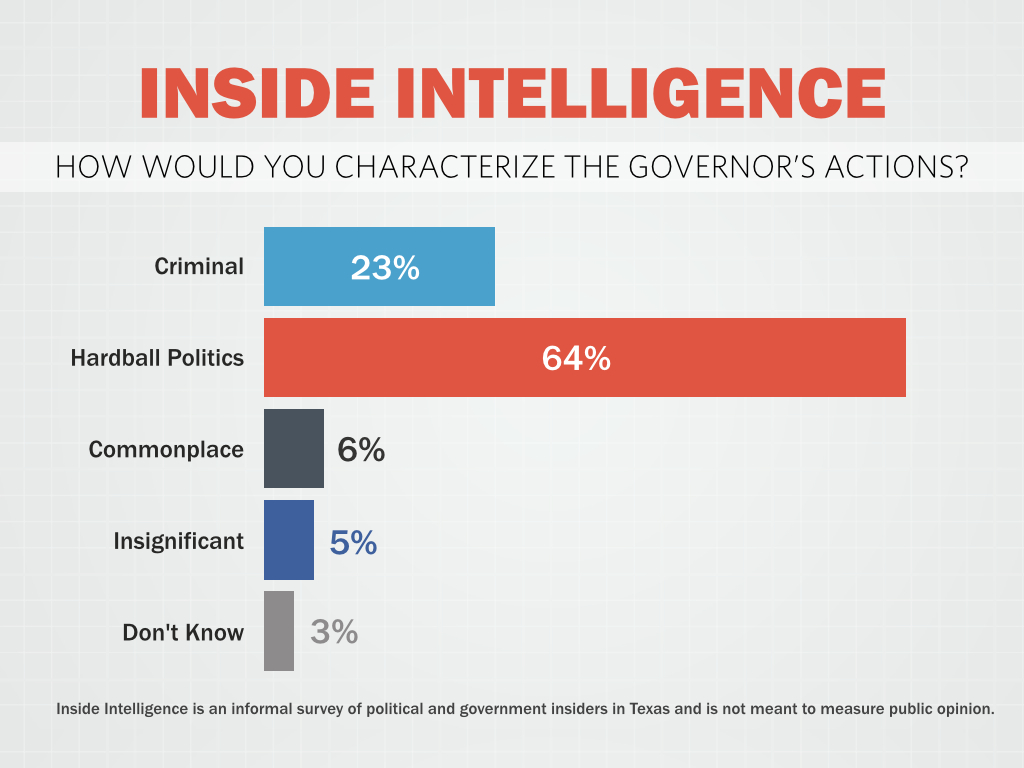 How would you characterize the threat and the veto?

• "Your survey omits the correct choice: Leadership and stewardship!"

• "Hardball politicking is part of our Texas DNA."

• "Depending on the lawyer, one may say criminal while the other says insignificant; most dome-watchers shrug it off to hardball politics; and the voters - this is what the expect - it's just commonplace."

• "Threat was criminal; veto was not. He should have just done it without mouthing off ahead of time."

• "It’s on the border between hardball and criminal--enough so that it may well end in an indictment not no conviction."

• "Only those blinded by partisanship could actually believe this was a criminal act."

Will this affect Perry’s political future?

• "The Left is attempting to portray what the Governor did as criminal. The problem with their narrative is that there is only one criminal in this matter and it's Rosemary Lehmberg."

• "In modern presidential politics 'under investigation' seems to be a standard entry on many candidates' resumes. So, no, no effect."

• "Probably - why else would a special prosecutor raise the issue eight months later, post-Primary election, with a lame duck governor, who has Presidential aspirations?"

• "Depends on whether he is indicted."

• "Ask Chris Christie if bully tactics can impact your political future on a national stage."

• "This is one of those outrages that the press will go nuts about -- but the public gets it. The DA was driving drunk. She should have been forced out."