On Wednesday morning, state Rep. David Simpson, R-Longview, found two fliers slipped under the door of his Capitol office calling for the resignation of embattled University Texas System Regent Wallace Hall. In large red letters, the fliers, which were also distributed to other lawmakers and posted around the University of Texas at Austin campus, declared, “We can’t let one man destroy UT-Austin.”

It’s the latest indication that emotions surrounding Hall’s fate have spiked in recent weeks, as higher education observers await the next move of a legislative committee that has conducted a long and expensive investigation into the regent. Though the heat appears to be turning up — a report issued by a special prosecutor last week suggested there were multiple grounds for Hall’s impeachment — the committee is proceeding cautiously. Any decision, including the possible recommendation of articles of impeachment, is weeks away. 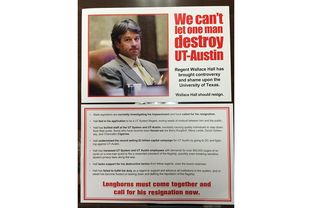 Hall’s propensity for investigating UT-Austin administrators put him in the bad graces of some lawmakers, who accused him of being on a “witch hunt” to oust the institution’s president, Bill Powers. Hall, who did not return calls seeking comment, has argued that such oversight activities are part of his duties as a gubernatorial appointee to the board — and that his inquiries have uncovered evidence of favoritism in the university’s admissions practices and questionable accounting practices, among other problems.

The House Select Committee on State Agency Operations, which has the authority to recommend the impeachment of gubernatorial appointees, launched a review of Hall’s behavior in June. Last week, Houston attorney Rusty Hardin, the committee’s special counsel, released a report laying out four possible reasons that the committee could recommend Hall’s impeachment. They included allegedly intimidating witnesses associated with the investigation, making “burdensome” requests for information and improperly handling confidential student information.

It took a significant amount of time and money to reach this point. Hardin’s firm has been paid almost $210,000 to date. The last payment was in February, according to the comptroller’s website. That total will rise once the bills for the firm's final two months of work come in. Meanwhile, the UT System has racked up a bill totaling more than $273,000 for its outside attorneys.

The legislative committee’s co-chairs, state Reps. Dan Flynn, R-Van, and Carol Alvarado, D-Houston, have already referred the Hardin report’s allegations of potential criminal violations by Hall — specifically his handling of private student information — to Travis County prosecutors. But what they intend to do with regard to impeachment is unknown.

Flynn told The Texas Tribune on Wednesday that he is hopeful that the committee will hold its first meeting since the release of Hardin’s report next week, most likely on Thursday. But he cautioned that the matter would not be resolved at that point, and that the meeting would mostly be a working session conducted behind closed doors so members could decide how they want to proceed.

“We want to be fair and we want to be thorough,” he said, “because I know there will be discussions about this in years to come.”

In a recent letter to the committee, Hall’s attorneys contended that the process has not been on the level, and that the committee “is not serious about its mission, and instead is engaged in a campaign to influence public impressions of Regent Hall for political purposes.”

Hall did not testify before the committee or provide lists of possible witnesses, though he was asked to do so. Flynn described his lack of cooperation as an “affront.”

If Hall were to be impeached, he would become the third person — and the first non-elected official — to suffer such a fate in Texas state history, a fact that is not lost on Flynn. That the heads of the committee conducting the investigation might also receive scrutiny did not escape Flynn either.

Committee members have already faced criticism from some of their own colleagues who don’t believe Hall’s actions warrant a legislative investigation, let alone impeachment.

In the House, Simpson has been among the most vocal critics, repeatedly accusing the committee of not being transparent, despite its name. Though he has tried, Simpson has not been permitted to participate in its closed-door sessions or ask questions in its hearings.

In an interview on Wednesday, Simpson called the unsigned, unattributed flier “a false campaign advertisement piece” and said that was “par for the course.”

“People want to pursue this political witch hunt without exposing who they are or being transparent themselves,” he said. “This whole thing has just been a show.”

Simpson said he doesn’t think the committee will pursue impeachment, and that the co-chairs referred potential criminal violations to Travis County as “a way for them to look like they’re doing something instead of impeaching.”

Flynn defended that decision, saying it was “proper procedure” to refer issues dealing with possible criminal matters to authorities. Now that those allegations are in the hands of prosecutors, he said, those issues are “out of the hands of the committee.”

State Rep. Lyle Larson, R-San Antonio, a member of the committee, has not hidden the fact that he wants Hall to go. Larson has repeatedly called on Gov. Rick Perry to demand his appointee’s resignation.

Hall’s resignation, Larson said Wednesday, would “allow the healing process to start at the UT System.” He also said there needed to be more effective mechanisms for removing regents who violate the policies of their university systems. But if Hall does not step down, Larson acknowledged that seeking removal via the impeachment process could prove difficult.

“We’ve got to look at the political realities,” Larson said. “There is a faction of folks that probably won’t support moving forward [with impeachment], both in the House and the Senate. We’ve got to sort through that. We don’t want to do anything from a futility perspective. We want to have a meaningful outcome.”

People on both sides have expressed concern about the precedent the committee might set by how it proceeds. The governor has warned that impeaching a regent under these circumstances could have a chilling effect on board members throughout the state. Hall’s lawyers have expressed a similar sentiment, as has Simpson.

Jenifer Sarver, a spokeswoman for the Texas Coalition for Excellence in Higher Education, which formed in 2011 in opposition to some of the governor’s proposals for higher education, had a different take. Like Larson, the coalition has called on Hall to resign. It has also called on the committee to investigate the issue further.

“If people are allowed to abuse the public trust in this way without ramifications,” she said of Hall, “that sends a chilling signal to the people of Texas that appointees are allowed to run wild.”

But some members of the committee appear ready to put the matter to rest. State Rep. Charles Perry, R-Lubbock, issued a statement on Wednesday saying: “It is my desire and intent to bring closure to this matter and the process that provides nothing positive to the educational institutions, the taxpayers, the appointment process or the legislature. In other words, it is time to move on."

Given the different opinions among the committee members, Flynn cautioned against jumping to conclusions on how they would proceed. He said the final report issued by the committee would not necessarily resemble Hardin’s report, which made a strongly worded case for impeachment.

When their final product is released, Flynn said, “I know everybody won’t like it.”

“But at the end of the day,” he added, “I want it said by people that are free-thinking that we did an investigation, it was thorough, it was complete, and it tried to address the issues and didn’t worry about the politics.”

Disclosure: The University of Texas at Austin is a corporate sponsor of The Texas Tribune. Rusty Hardin was a major donor to the Tribune in 2012 and 2013. A complete list of Texas Tribune donors and sponsors can be viewed here.