With independent counsel Rusty Hardin handing in his inquiry report on University of Texas Regent Wallace Hall, we asked the insiders this week about the troubles at UT, what they think ought to happen and what they think the fallout will be.

Most of the insiders, 78 percent, believe Hall should leave the board of regents, and slightly more than half believe the House should impeach him. This next number should put that in perspective: 61 percent said their sympathies lie with the administrators and alumni trying to fend off the regents, while only 13 percent said they are on the side of “the regents who say they want to reform and modernize UT.”

Four out of five think the squabbling is hurting UT’s reputation, and 60 percent believe the turmoil will keep qualified candidates for chancellor away from UT.

As always, we collected comments along the way and a full set is attached. Here’s a sampling: 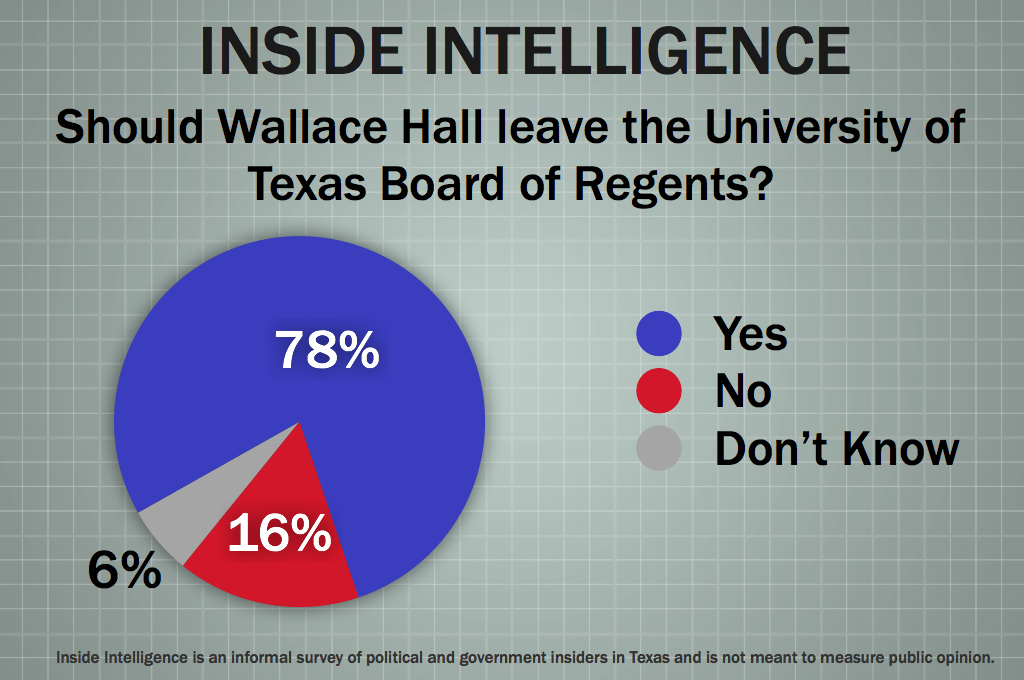 Should Wallace Hall leave the University of Texas Board of Regents?

• "He has disgraced The University, the system, and himself; of course he should leave. But he won't."

• "One should not come to conclusions without knowing all the details. However, his mere presence has become toxic and that is something UT cannot have hanging over its head."

• "When the topic of UT is anything other than educating kids, something is very wrong."

• "Only when and if all the facts are in and they support the action."

• "If our state government is truly set up so that Board Members and Commissioners oversee state agencies and not the Legislature, then Hall needs to stand his ground."

• "So we can replace him with somebody who will buy into the party line and do what he is told?"

• "What a waste of time and resources. I'd never heard of this regent prior to this parlor game, and I'm anxious not to hear of him again. Shame on all parties for furthering this vapid inquiry."

• "He has done an outstanding job exposing waste and corruption at a school that thinks it is above the law. Wallace Hall should be commended for his hard work and dedication." 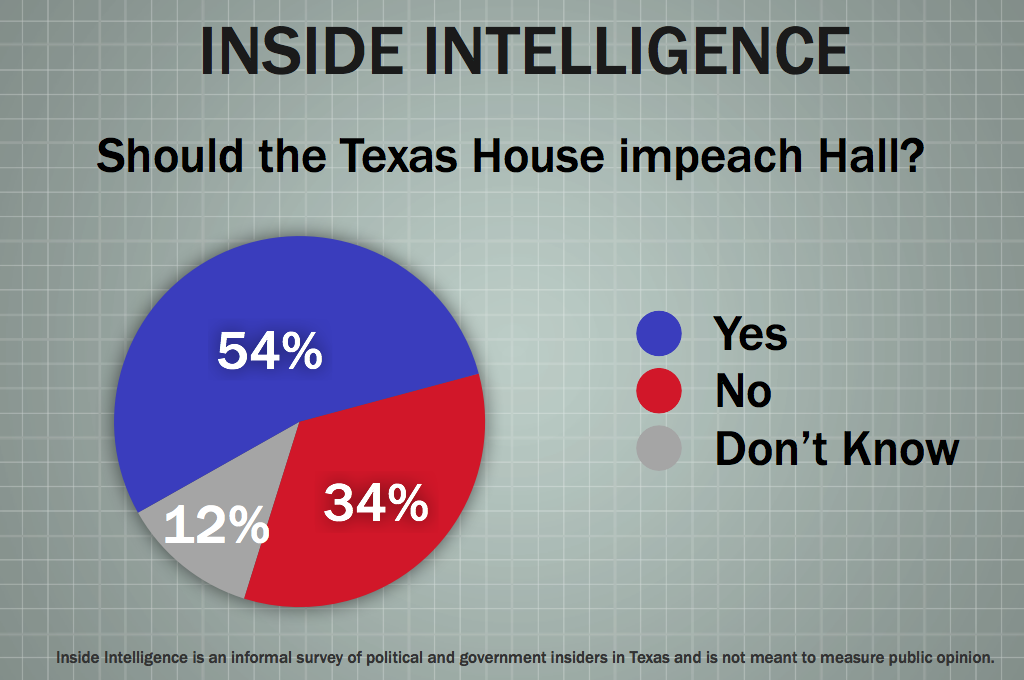 Should the Texas House of Representatives impeach Hall?

• "They first need to hear his side of the story and then weigh the facts and evidence before them. They should absolutely the hold impeachment hearing--too many unanswered questions exist for this to go away on its own--but whether they vote to impeach him depends on the whole, complete picture of what happened. The logical progression is to carry this forward to the next step."

• "Being a destructive nut is not cause for impeachment."

• "Yes, because it will be good for higher education to litigate this in the open."

• "It will cost too much to do it and constituents will not like it. It would seem congressional."

• "They shouldn't have to. He should step down." 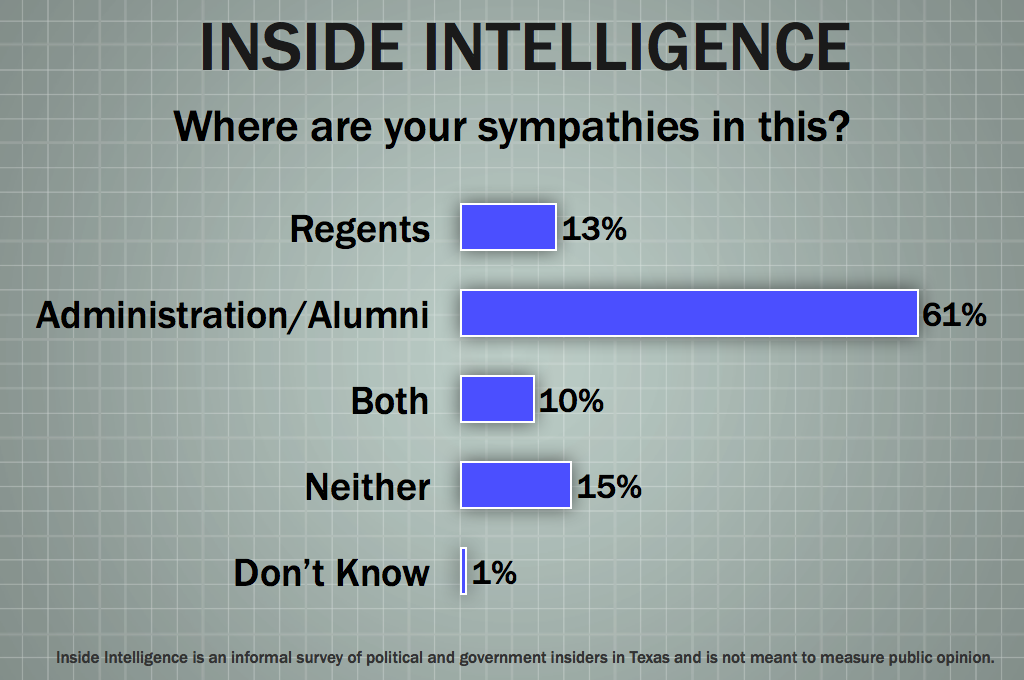 Are your sympathies more with the regents who say they want to reform and modernize UT or with the administrators and alumni who say they are trying to fend off political interference from the regents?

• "This isn't about reform and modernity. This is about a bruised ego and retribution. That said, these two options aren't mutually exclusive--as an alumnus and tax payer, I loathe political interference from regents, especially from Inspector Clouseau, but I realize some reform and modernity is likely a good thing; but it's all in how it's pursued and explained."

• "Bill Powers' personality isn't all that congenial, but frankly it's refreshing to see a university president who isn't afraid to buck the rich, politically connected, (mostly) white men who think they are qualified to run our universities because they managed to get Perry to appoint them to the coveted board of regents. Statutory qualifications for being a regent? You must be a qualified voter. Seriously. That's it."

• "The regents at universities have a responsibility to lead and take action that will help sustain and grow the organization, think corporate board. If they deem it necessary to make changes to the administration and how the school operates then that is their job. If the administration and students do not like change or modernization maybe they should leave and find some place that wants to be static and whither."

• "Insulated academics need to answer to somebody. But then regents need to know some bounds on how far they can or should go."

• "This is a battle between those who think they know it all and those who know they know it all. The only people more arrogant that political regents who want to 'help' their institution of higher education are the people in academia who never believe anyone outside of higher ed has a good idea."

• "I am pro-reform and anti-dysfunction." 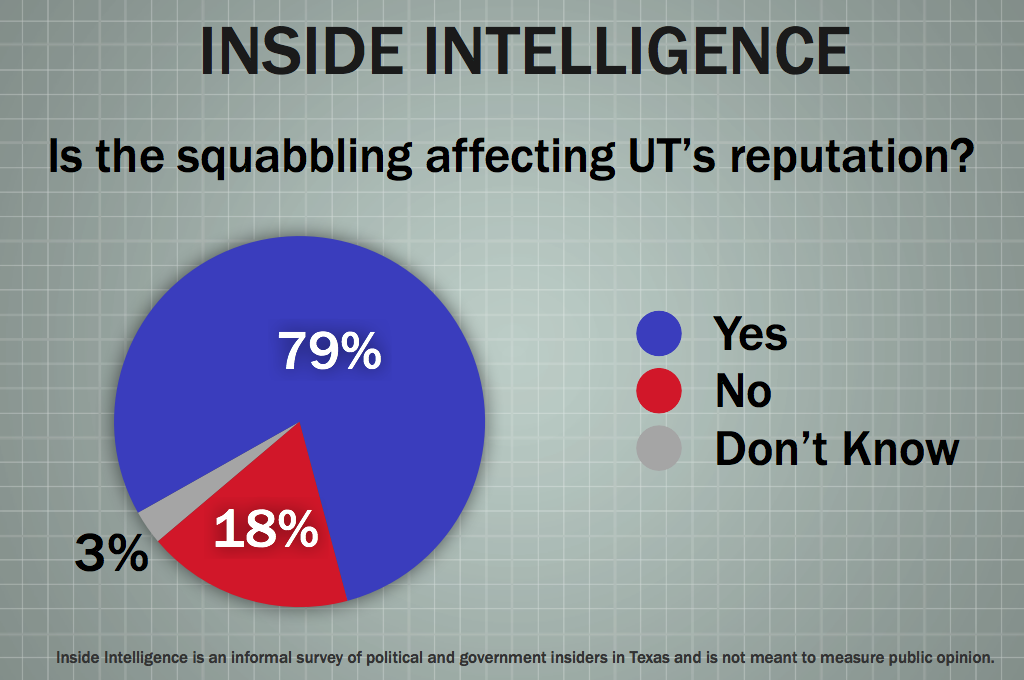 Is the squabbling among regents, administrators and others affecting UT’s reputation?

• "Yes, UT's reputation is affected both short term and long term and both in-state and out-of-state. But what's hurting UT's reputation even more was Mack Brown's dismissal and departure."

• "Hopefully, the next chancellor will possess the people and political skill to navigate among any conflicting parties and unite them toward common goals that benefit the flagship institution of this state. It is obvious, the previous chancellor was unable to do so."

• "And ain't it fun to watch! Hubris has a way of bringing about change. The 'mighty orange and white' so bold and brave and confident bringing its own house down. I need a drink and some snacks. This is made for TV fun that I enjoy."

• "In some circles...but would argue that UT's mediocre football teams in recent years have had a bigger impact on reputation."

• "Research dollars, private contributions, donations of collections etc. all slow down. Why give something to a university which is having 'stability' issues. When your regents and chancellor are having issues - it affects all of your universities, but most especially the flagship university!"

• "Of course it is negatively affecting UT's reputation. Isn't that Perry's goal? (Whoop!)" 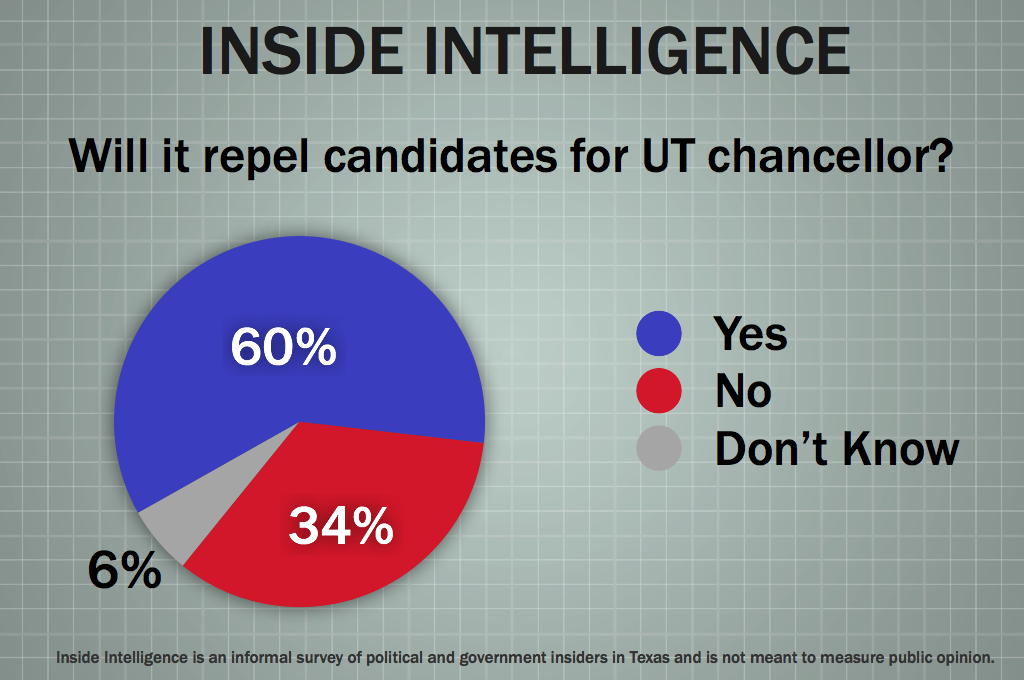 Will the turmoil keep qualified candidates for chancellor away from the University of Texas?

• "Who would accept the challenge to lead this outstanding system when the governing body can't get along? It's a recipe for disaster."

• "I think this is a rough patch but the truth is the chancellor of the UT system is still the brass ring in terms of academic posts."

• "The money and power will attract plenty of candidates."

• "Chancellor candidates for UT would be able to pick their institution. They will not want to come a place where they are not able to lead without undue interference."

• "There will be plenty of candidates, but some highly qualified possibilities will wisely stay away from a toxic political environment."