We lucked out this week with a set of questions that seemed to anticipate a U.S. Supreme Court decision on campaign finance and transparency. Sometimes you’re smart, and sometimes you’re lucky.

A large majority said all contributions to all groups should be disclosed, and two-thirds of the insiders said the same people would contribute if disclosures were always required.

About two in five said political groups are less influential when their financial sources are disclosed, but 12 percent said disclosure makes them more effective and 36 percent said it’s a wash.

Does full financial disclosure to voters change election outcomes? Yes, according to 45 percent of the insiders, followed closely by the 40 percent who said no.

We’ve included a full set of verbatim comments on the questions in the attachment. A sampling: 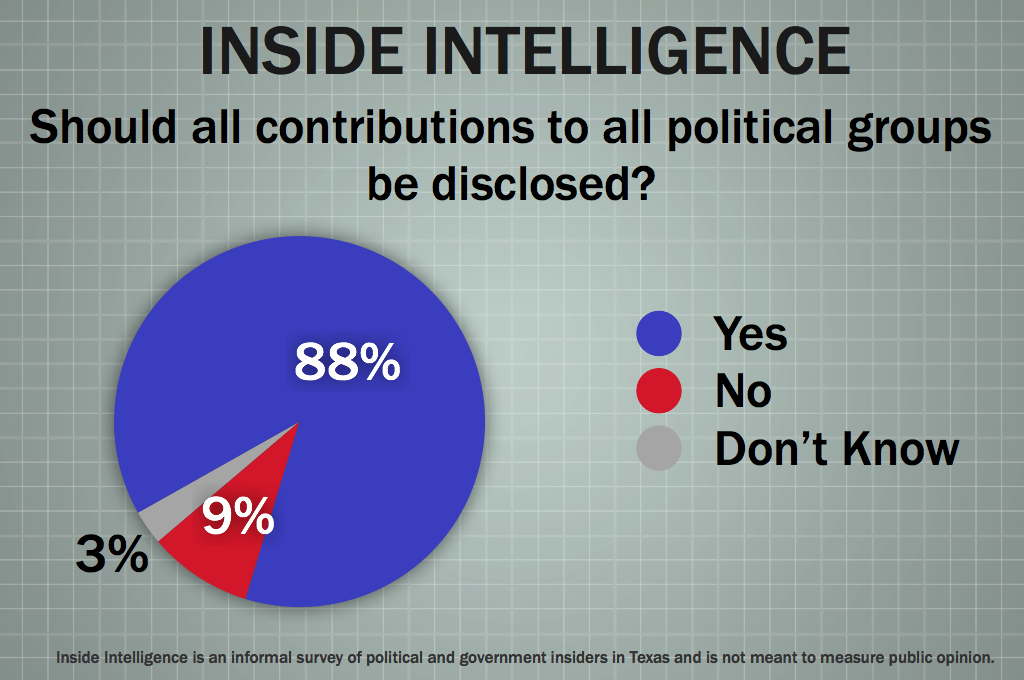 Should people and interests donating to campaigns and to third-party political groups be required to identify themselves and the details of their contributions?

• "I don't know about 'the details' but identities and dollar amounts should be required. This, from a supporter of the back-room deal..."

• "Let's go back to the days of chicken magnates handing out thick envelopes around the Capitol - it's fair for everyone when there are no rules, right?"

• "I have never seen an argument that outweighs the right of voters to know who is supporting candidates who want to represent the citizens of Texas."

• "It is ridiculous to report all the details on a $50 donation and be able to hide a $100,000 one with a third-party group that is as political as any campaign." 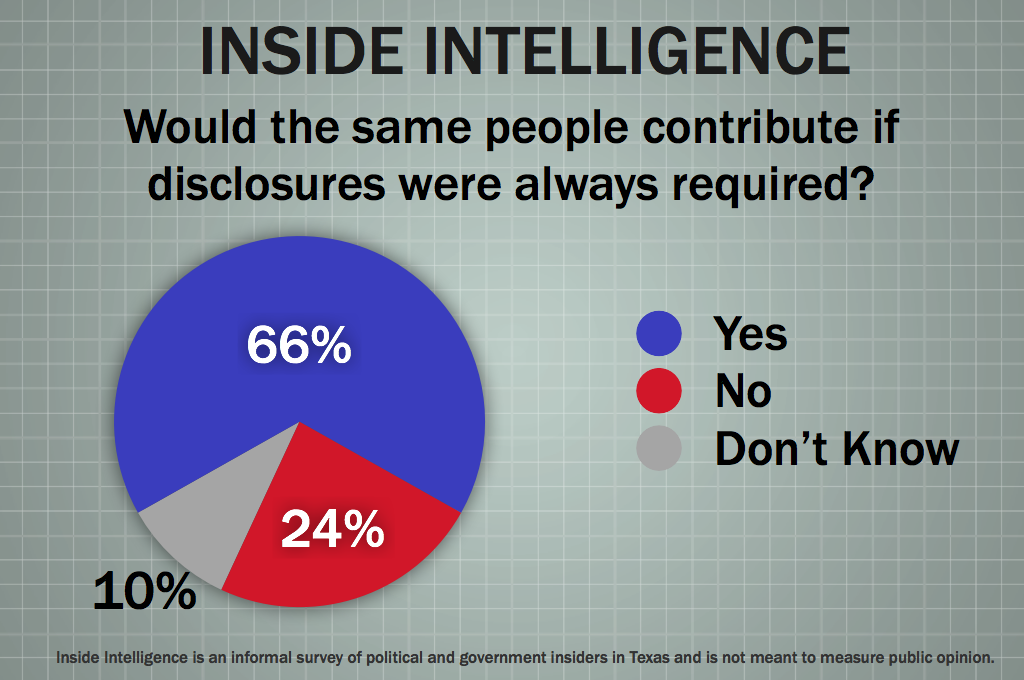 If the actual sources of campaign financing were revealed in a full and timely way, would the same people and interests take part in Texas elections?

• "Probably not to the same extent they do under the cloak of darkness. It all feels so rigged, bought and paid for now. Not very encouraging for efforts to increase voter turnout."

• "Maybe. Some would, others would be more hesitant. The bigger issue would be that people might figure out how few people are actually financing the campaigns and why they have such significant influence."

• "Some people are obviously interested in anonymity, or else it would not be offered." 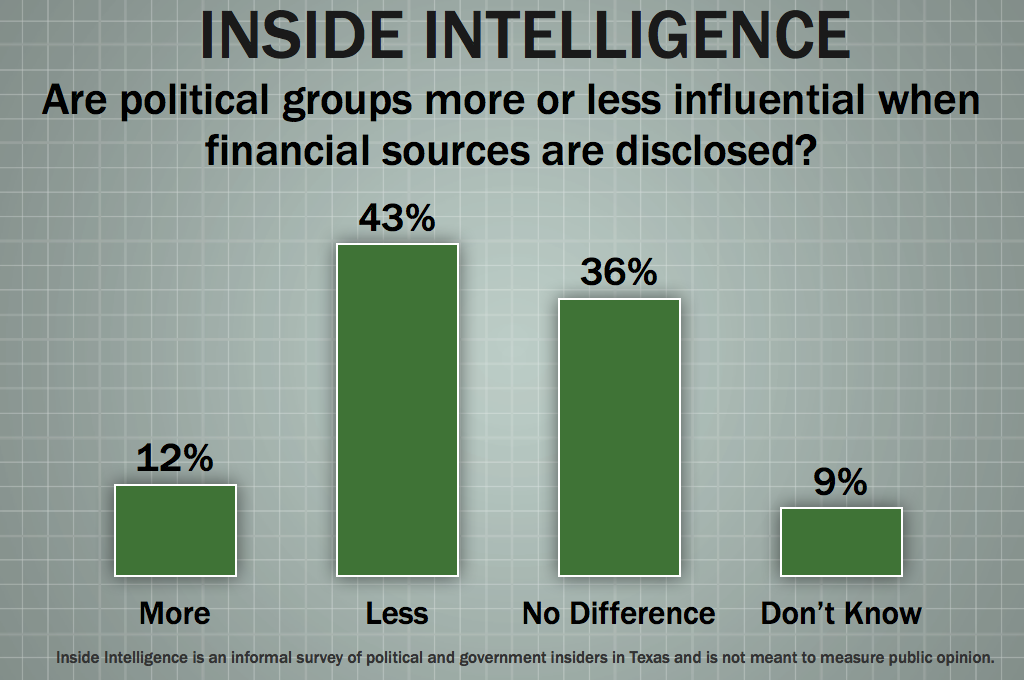 Are third-party political groups more or less influential in elections when they are required to reveal their financial sources?

• "That depends on who the third party group is, what the scheme behind the dark giving is and how much the voters care about the scheme."

• "This question assumes all 3rd party groups are created equal, but they aren't. Revealing sources probably makes no real difference to a legitimate group. But a sham group acting as a front for a single contributor would be much less influential after being forced to reveal its sole source."

• "Paid media -- particularly slate mailers -- are probably the most influential factor in Texas elections -- and much of that has disclaimers on it."

• "When the public is made aware of the source of funding, it tempers influence of that funding."

• "No difference in the campaign, but the real problem happens during the session. Disclosure is a lobbying problem, not a campaign one." 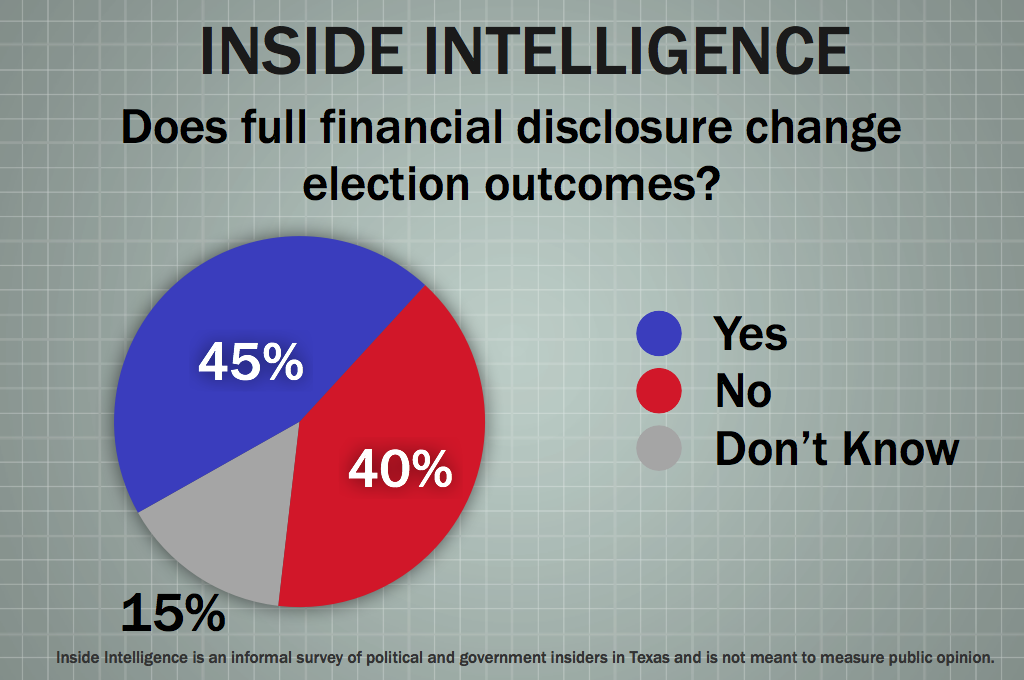 Would election outcomes in Texas be any different if voters were aware of the actual sources of all of the money spent by and on behalf of the various campaigns, bond issues and other initiatives?

• "Another 'Yes, but...' Insiders kid themselves. Voters don't care. For the 5% of the population that actually gives a crap, it would depend on the group who's spending, their relevance to the issue, and the amount and source of money...”

• "A vast number of Americans can't even name a sitting US Senator, much less cite the sources of how campaigns are financed."

• "People who want to know can almost always find out who is funding something."

• "It’s an interesting question to ponder. I would like to believe that once Texans 'figure it out,' they will realize the need to participate to get everything back on track."

• "Would hope so, but our abysmal turnout makes me wonder. Don't think you will convince any of the crazies that their anointed are tainted."