All but a handful of our government and politics insiders think women should be paid the same as men doing equivalent work.

That set the stage for a question about a state version of the Lilly Ledbetter Act, which passed the Legislature and was vetoed by Gov. Rick Perry during last year’s legislative session. Slightly over half of our insiders said the state should have such a law, while 38 percent said it doesn’t need one.

We collected verbatim remarks along the way and have attached a full set. Here is a sampling: 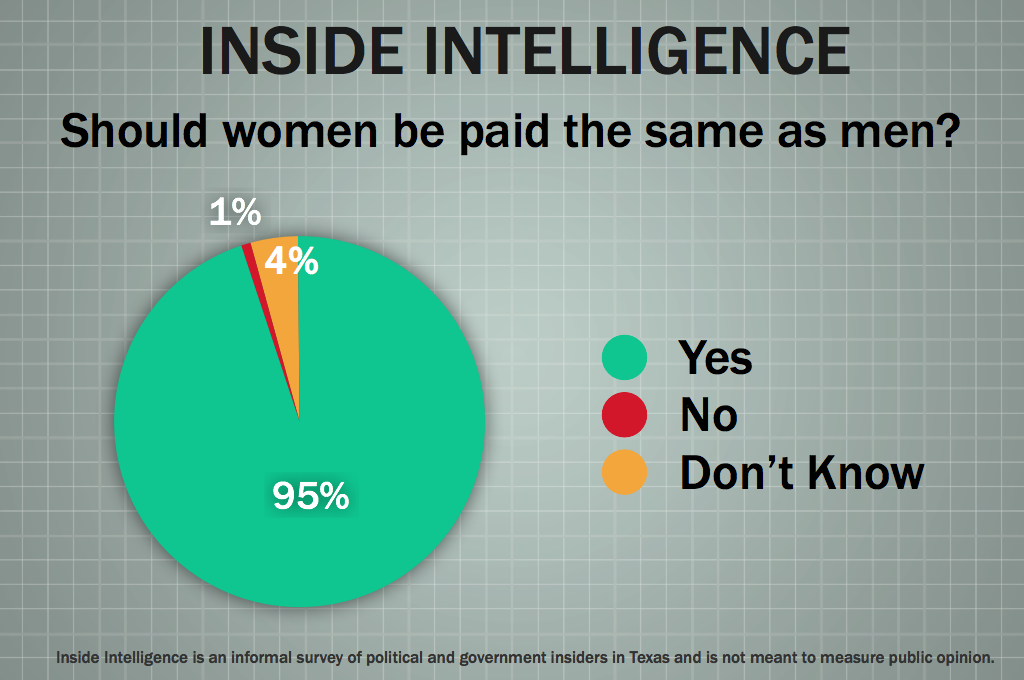 Should women be paid the same as men for equivalent work?

• "A closer look needs to be taken behind the numbers before we assume this is not already happening."

• "Please find me the person in Texas that thinks men should be paid more than women for the same work. Someone is living in the 60s."

• "The real issue is that women are demanding the same pay for UNEQUAL work."

• "What percentage of the TT 'insiders' is men on an average week? Might want to lead your write up on these questions with that info." [editor’s note: It was 82 percent male, 18 percent female this week.] 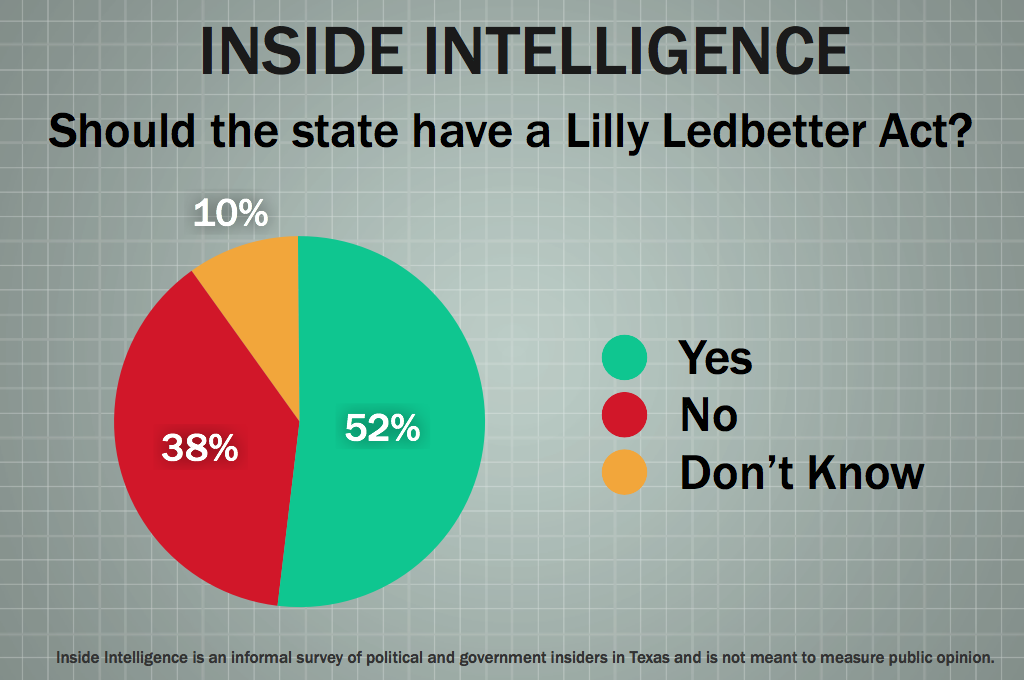 Should Texas pass a state version of the federal Lilly Ledbetter Act, a version of which was passed by the Legislature and vetoed by Gov. Rick Perry last year?

• "This is a non-issue in the real world. Let the FREE MARKET determine wages."

• "Equal pay (non discrimination on the basis of sex) is already the law in Texas. Under the guise of equal pay the Legislature passed a bill that left employers liable for actions that could date from decades past. This open-ended liability for employers is a bad policy and Perry was right to veto it. The whole 'equal pay' issue is a smokescreen."

• "I generally think we don't need more laws--that the State has no role in deciding pay structures of private companies...but I want my girls to earn every dollar they can and not be shortchanged because they're females."

• "Only because it's hard to make sure you are being paid a fair salary when you don't know what others are being paid. If you knew, then you could represent yourself better in such negotiations."

• "We already have laws that make discrimination on the basis of gender illegal. Why add another one?" 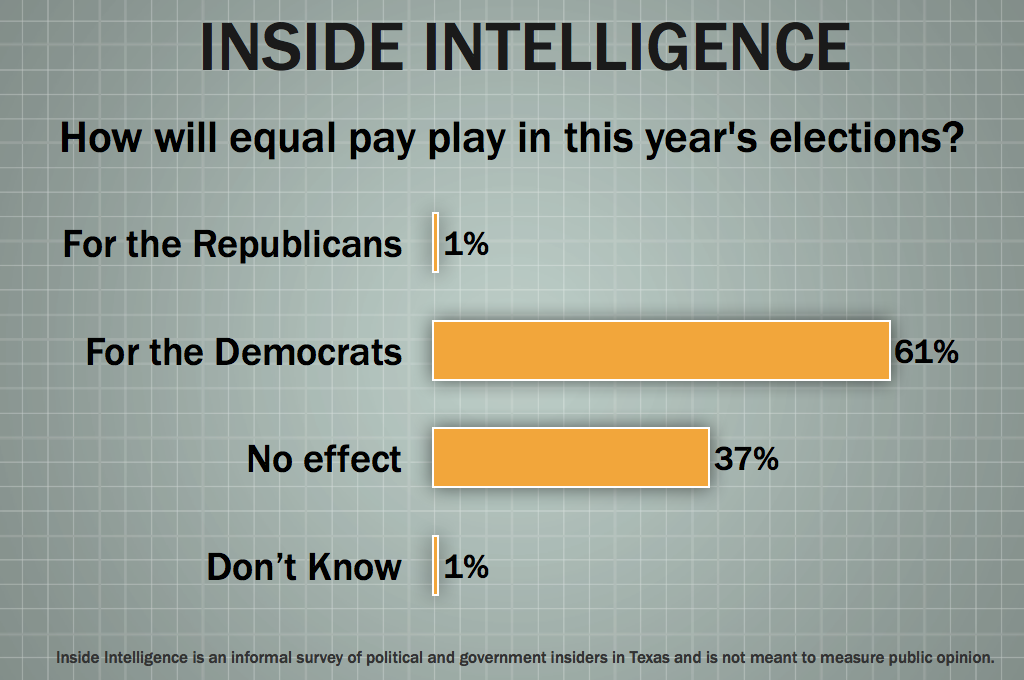 How will equal pay play in this year’s state elections?

• "Repubs will focus on abortion and it will be their downfall"

• "In the context of other women's issues being raised by the Democrats, it 'could' show how different each party is in regards to women."

• "It will play for the Democrats, but not enough to win."

• "Much ado about nothing if you know the true story. The Ds tell so many lies about this issue. If you compare job to job the data tells the truth pay is equal. The 77 cents on the dollar is a lie." 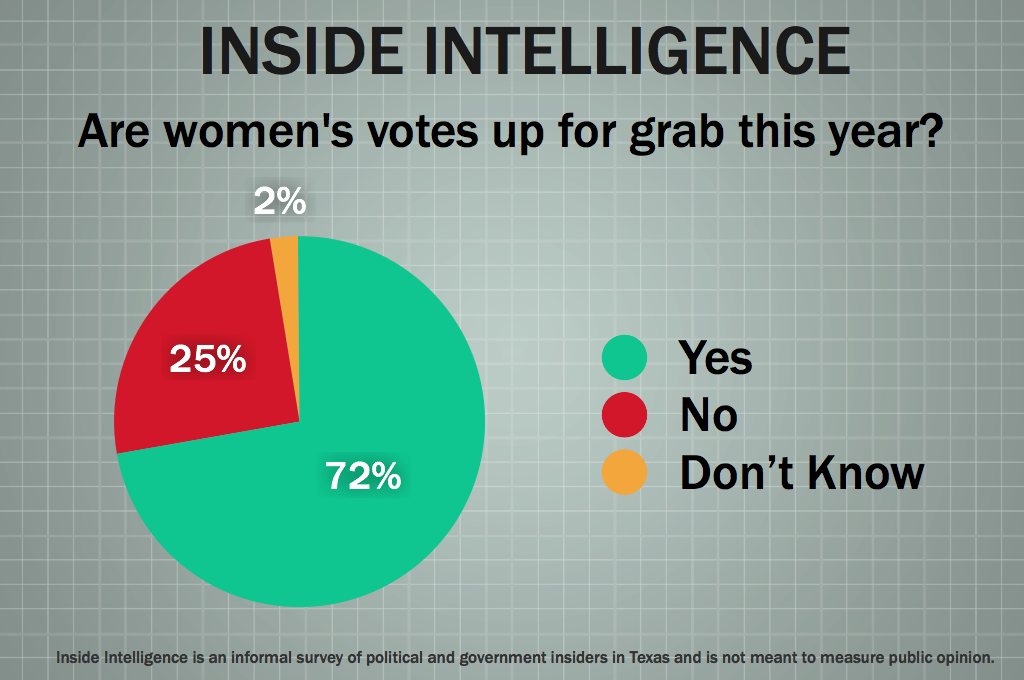 Do you think women’s votes are up for grabs in this election year?

• "Women will determine who wins this year. Don't think the wacky Repub women are voting that way - they just tell you they are! Surprises in store."

• "*Which* women? Younger, older, single, married, mothers? Seems like each subset has picked a side and is likely not to be persuaded to move anytime soon."

• "I think the female vote is up for grabs every election, but even that statement pigeon-holes women into a singularity. You're ignoring the fact that women care about other issues, and that in this election they will vote only for candidates that support equal pay or abortion rights."

• "Don't see conservative Texas women jumping the fence for this."

• "They are every year. But it's not a monolithic block and efforts to treat it as such are foolish."

• "Not any more than any other election."