Hot on the heels of the March primaries, and with the May runoffs already on the horizon, 12 weeks away, we asked the insiders to make some predictions.

The comments are interesting, as you’ll see, but first, we cut to the chase. On the Republican side, the insiders predict that Dan Patrick for lieutenant governor, Ken Paxton for attorney general, Glenn Hegar for comptroller, Sid Miller for agriculture commissioner and Wayne Christian for railroad commissioner will be appearing on your November ballots.

On the Democratic side, they’re picking David Alameel in the U.S. Senate race, and they split between Kinky Friedman and Jim Hogan in the race for agriculture.

A full set of the insiders’ comments is attached. Here is a sampling: 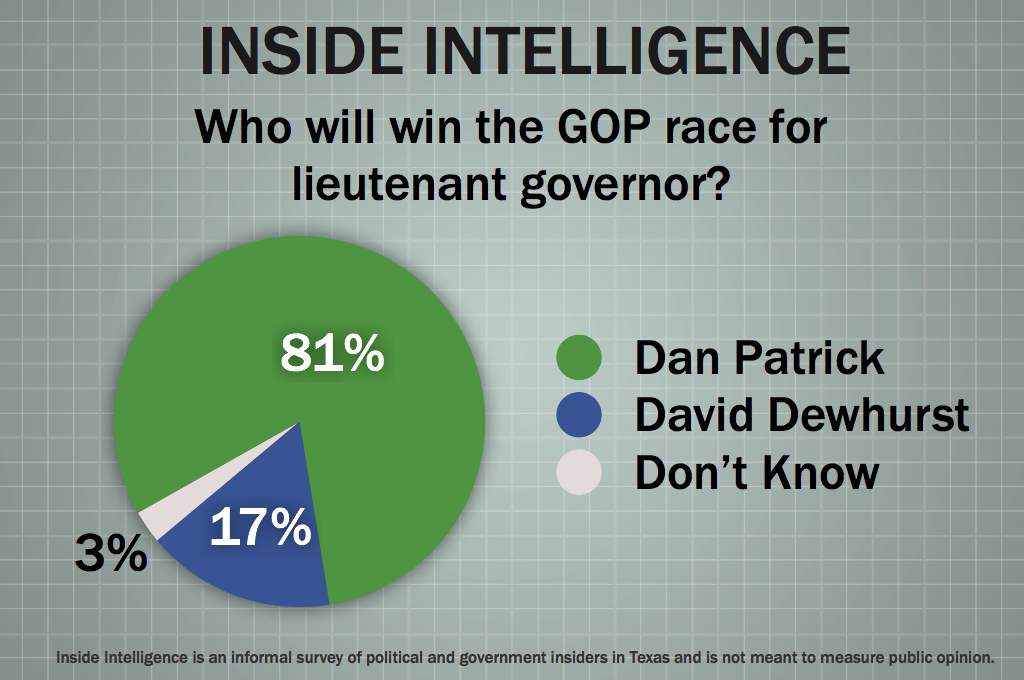 Who will win the GOP runoff for lieutenant governor?

• "Dewhurst set this in motion the day he filed. Thanks, Jerk."

• "I clearly don't know anything about Republican politics after Tuesday night. Sure hope it isn't Patrick."

• "I will never underestimate the power of the Tea Party ever again."

• "Take Note: The biggest step to turning Texas blue will be (God help us!) The election of Dan Patrick as Lt. Guv."

• "Patrick will lead a conservative slate that will sweep the runoffs."

• "Might be wishful thinking, but I think Gov. Dewhurst can pull this one out." 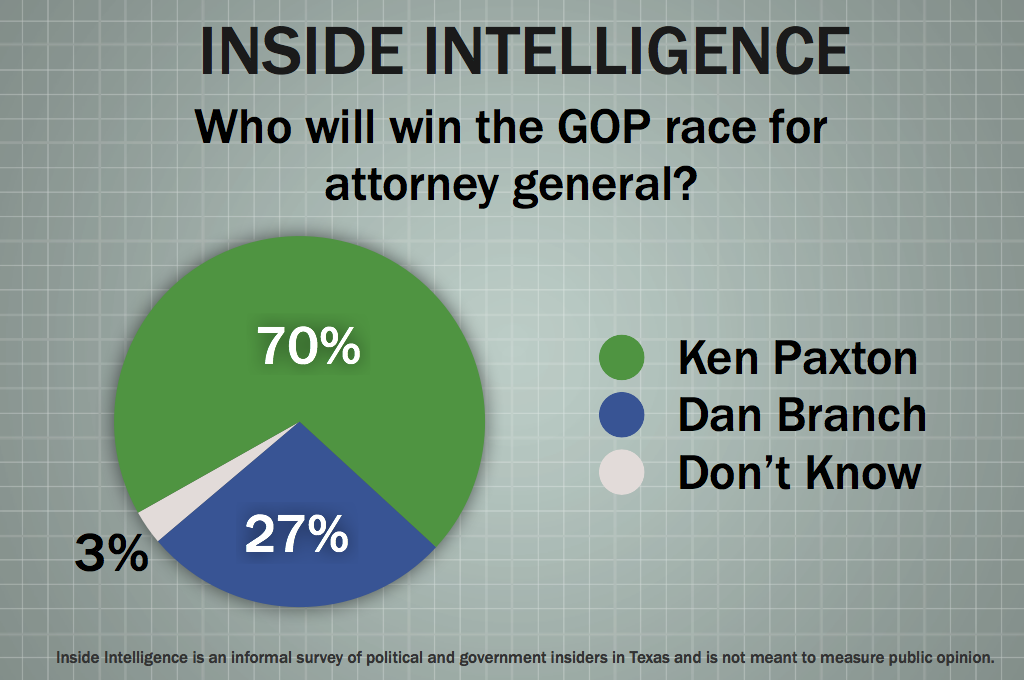 Who will win the GOP runoff for attorney general?

• "Absent intervention by Abbott, the Ted Cruz 'non-endorsement' endorsement of Paxton may be enough to tip the scale, especially since Cruz once aspired to this job."

• "Branch just doesn't look comfortable going to the right. He is country club pedigree and has a hard time connecting to the plebeian voter."

• "The Tea Party Conservatives will make it out to the polls for this run-off. Branch just needs to make sure others do too."

• "Branch did not take aim at Paxton until a few days before the primary election. I suspect a steady stream of real damaging information to target Paxton. Candidly voters don't know much about him other than he can get Ted Cruz to say nice things about him in a TV ad. I wonder if Cruz will actually endorse him in the run-off or just give him another 'faux-endorsement' for a TV ad."

• "Dan Branch made a big mistake: If you're gonna go crazy, you gotta go REALLY crazy." 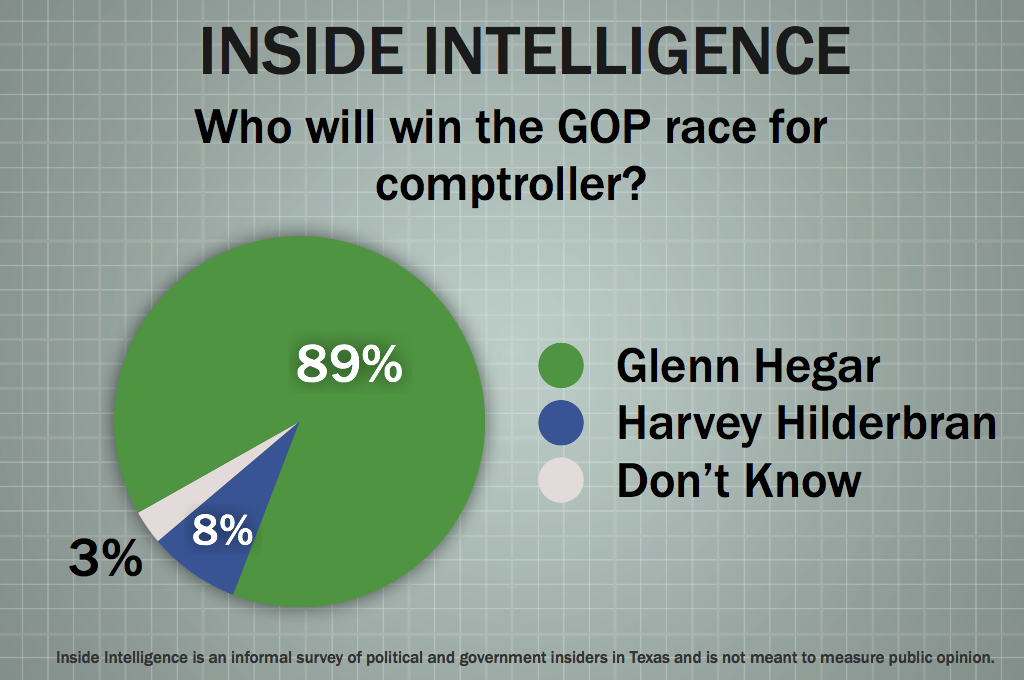 Who will win the GOP runoff for comptroller (if there is one; votes are still out)?

• "Glenn should win this one."

• "Hegar will prevail. No runoff."

• "If Hilderbran sticks to what he can bring to the office and what he plans to do while in office (sans his umpteenth point plan), the electorate will see he can fulfill this role. He really needs to utilize his chairmanship of Ways and Means as he experience in working with dollars and cents."

• "Obviously Hegar is awfully close and in most cases, as I expect is happening today, there's some serious conversations about the future. Personally I hope Hildebrand stays in there. Like Staples and Patterson, he is far more in touch with the average Texan. The shoot 'me up image Hegar presents for a job collecting taxes is kinda frightening. And I'm a sixth generation Texan with my own guns!!"

• "Note to All Consultants: Use the children. Shamelessly." 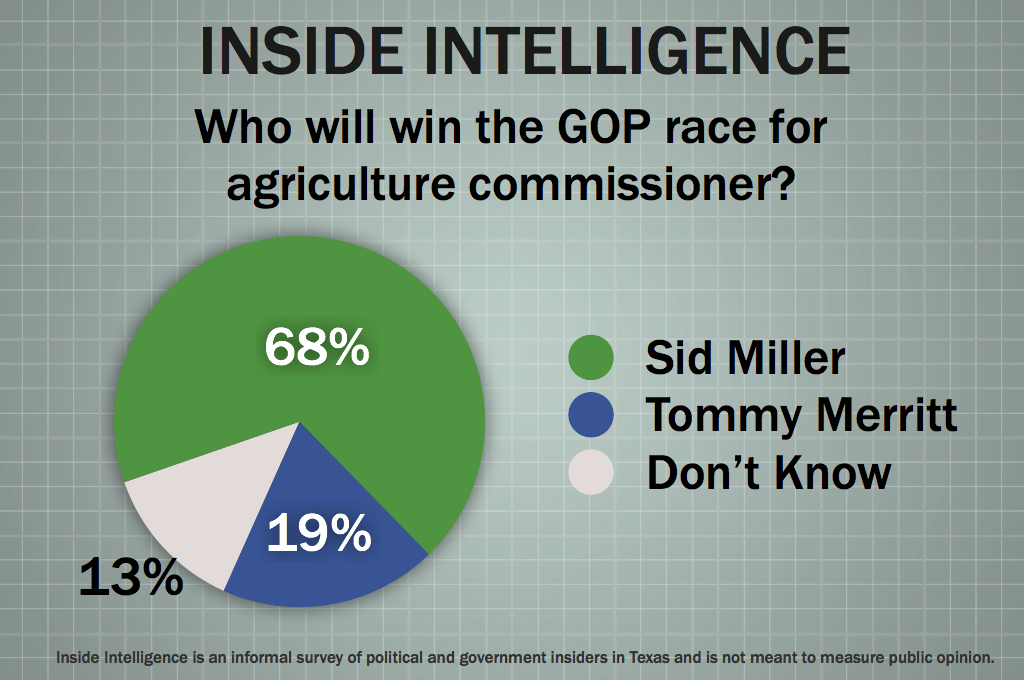 Who will win the GOP runoff for agriculture commissioner?

• "Merritt comes from a vote rich base of East Texas. Miller lives in a sparsely populated area of the state."

• "But wouldn't it be fun to have Tommy Merritt as a statewide elected official representing Texas?"

• "Honestly, watching these two names on the ballot make me sick. We should be moving forward and not backwards. Who cares."

• "Really? Is this what it comes down too? Good for Texas Weekly - bad for Texas."

• "Didn't these guys get voted out of their House districts and they're competing a statewide seat?" 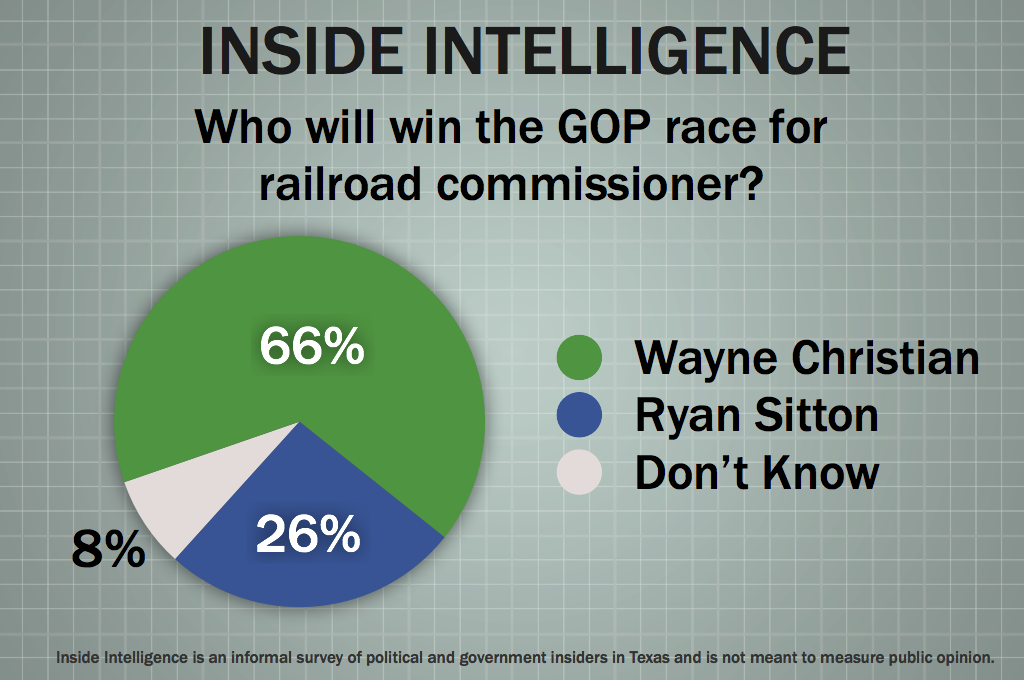 Who will win the GOP runoff for railroad commissioner?

• "Conservatives need fresh blood to lead us into the next chapter. No more 'has-been' on the ballots, por favor."

• "Who will vote against a Christian?"

• "At this point down the ballot I really don't care. This is a worthless state agency that should be wrapped up into the comptroller's office and maybe the governor's office."

• "These tend to be sorta boring stepping stone offices. Everyone is going somewhere else (except for Jim Nugent) or is trying. Wayne Christian has a record and a lot of negatives and the other guy is an unknown but kinda refreshing with no record."

• "Hopefully industry money can carry Sitton. Christian would be par for the course, though… Christian, Miller, Paxton, Patrick all in statewide office. This doesn't bode well for the state or the state GOP." 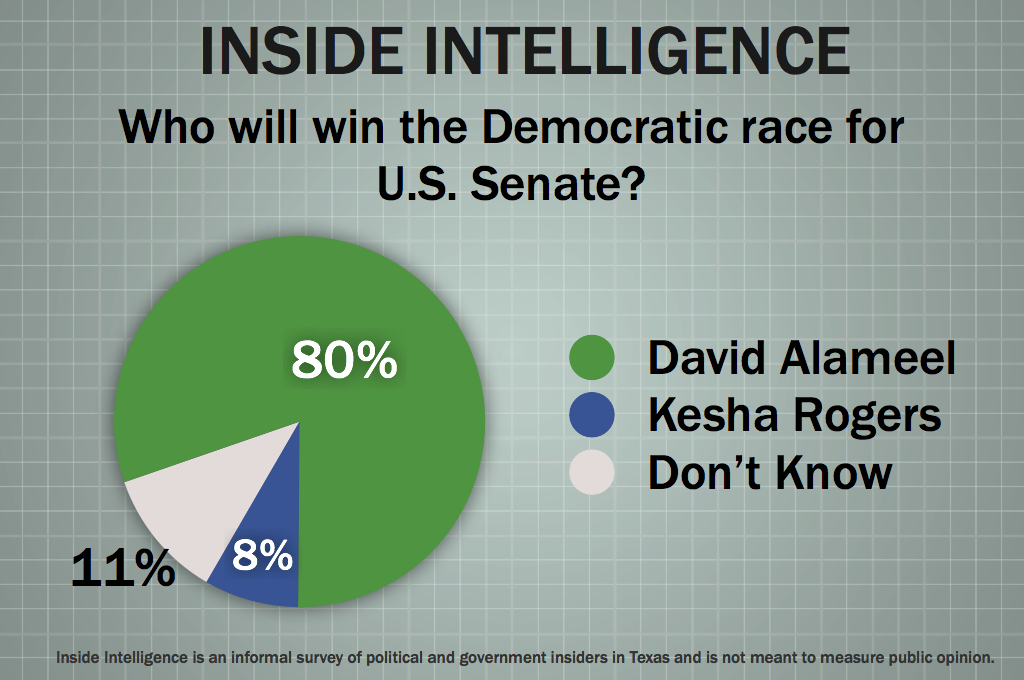 Who will win the Democratic runoff for U.S. Senate?

• "Please let it be Rogers. That would be awesome!"

• "The democratic party will be humiliated by a Rogers victory. They will do whatever it takes to pull Alameel across the line."

• "I've never heard of either one of the people"

• "Question to Ds: Why is your hand-picked candidate for Senate in a run-off?" 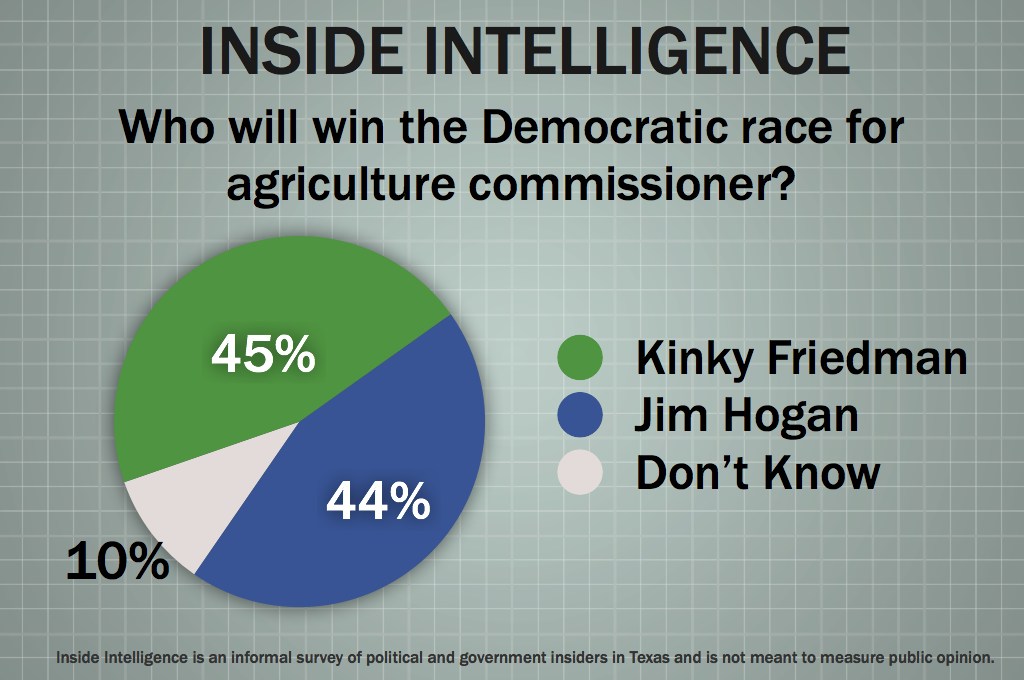 Who will win the Democratic runoff for agriculture commissioner?

• "Name recognition and the marijuana issue should put Kinky over the top."

• "Democrats aren't as crazy as Sid Miller and Tommy Merritt."

• "Aren't there any other options?"

• "Kinky wins, people know him. Then we can find out just how much Texas wants to legalize marijuana. My prediction is. They vote to legalize!"