With the party primaries underway, we asked the insiders about whether the parties themselves are necessary — and got an overwhelming yes for our trouble.

Most of the politics and government insiders said the candidates get a benefit from the parties, but 63 percent said a well-financed third-party political action committee was better for a candidate than the backing of a well-financed political party.

Finally, we asked whether the party platforms are useful, a question that 70 percent answered no.

As always, we collected remarks along the way and a full set of those are included here. A sampling follows: 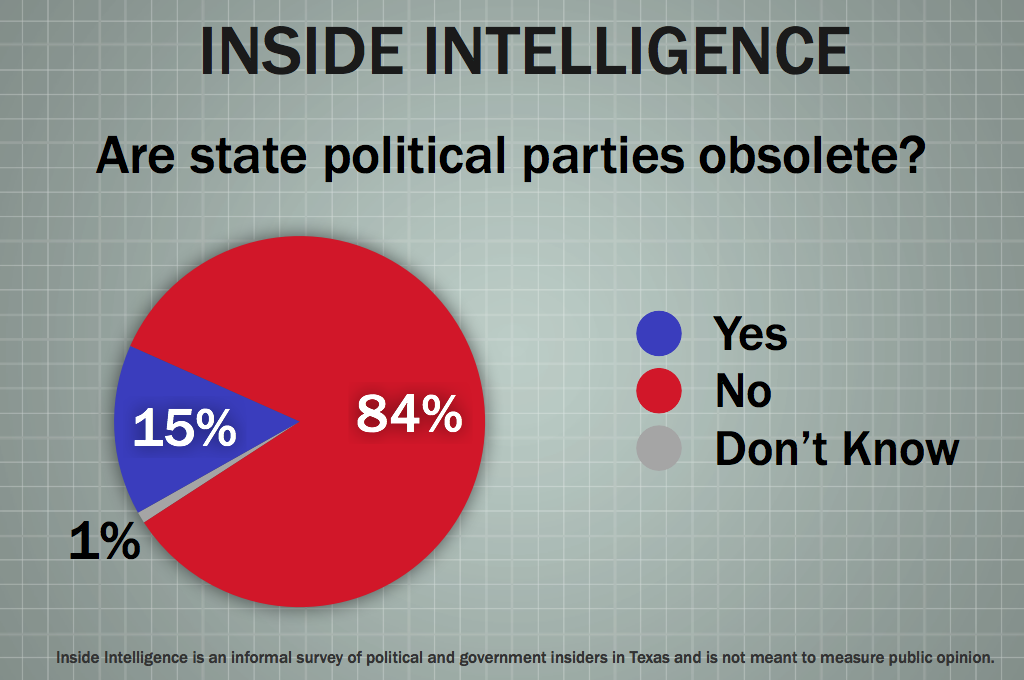 • "Can't speak for the Ds, but new leadership and a renewed focus on the platform has made the state Republican Party more relevant than it's been in a long time."

• "Though not obsolete, they have a new and very narrowly defined role in the process. We really now only need them to manage a state-of-the-art voter file, run the primary election and do generic hard contrast messaging against the other side."

• "No, the state parties are needed to run primaries and state conventions; RNC and DNC don't give a flip about those things. State parties could, however, do a better job at voter ID, registration, and GOTV."

• "Someone has to run the elections. State parties directly run the primary elections with funding from the sec of state. They run the conventions which are an integral part of the nominating process for the presidency."

• "They're not obsolete, because you need them to get on the ballot. But they are largely irrelevant." 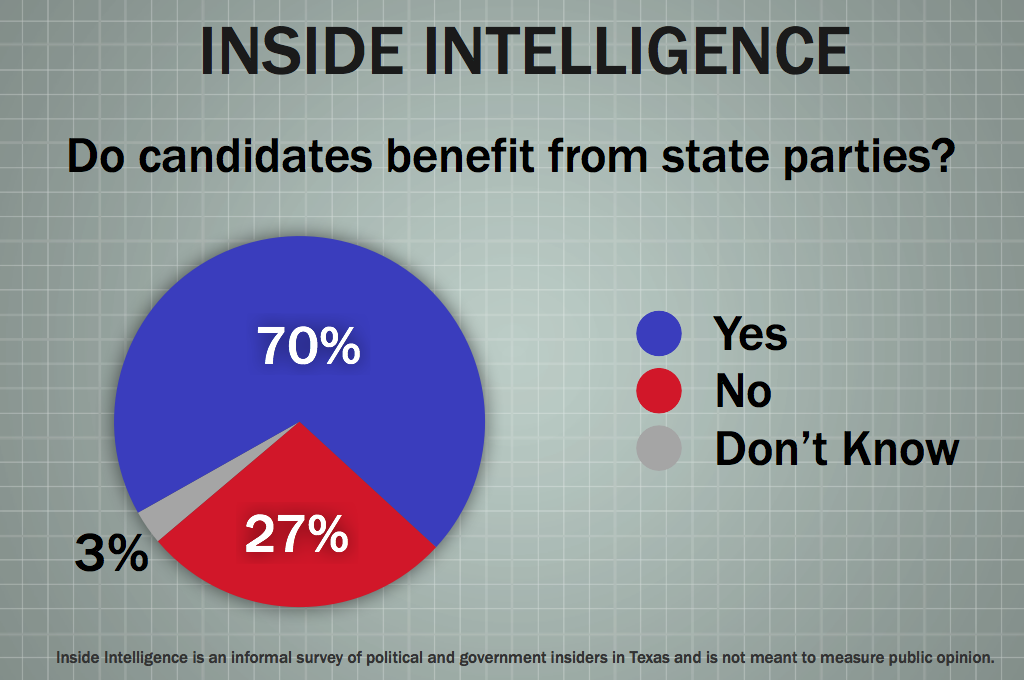 Other than the ideological identification with a particular political party, does a candidate get any benefit from the state parties?

• "In Texas, party affiliation is everything. It's like joining the right mafia family- you can get made or you can get whacked."

• "If you are not the party's nominee, you don't get the base vote (see 2006 general election results for Carole Strayhorn, independent for Governor). Even if it is only 39%, the base vote seems like a benefit to me!"

• "They are still able to in-kind significant resources like micro-targeting and the voter file, staff support and tracking/communications against the opposing side."

• "If you're an R, party affiliation gives you a leg up in virtually all parts of Texas except Austin and the border."

• "The benefit comes in the general elections. Both parties accept outside funds to mail directly to the base." 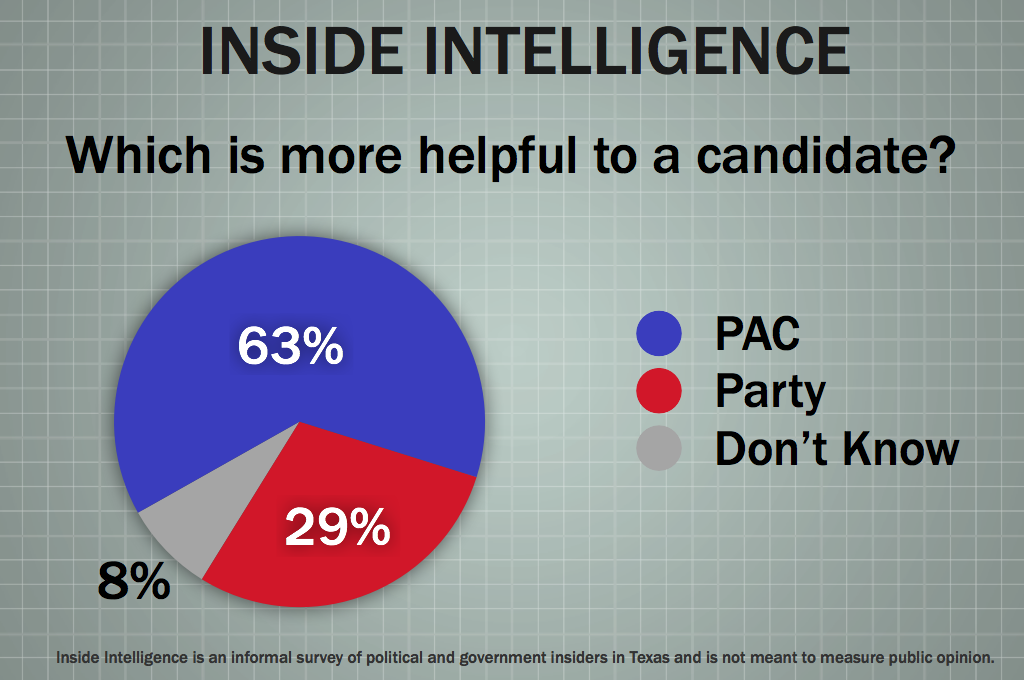 • "PAC's employee better strategists and can do more than a traditional party. Also, the party folks do not get involved in primaries so having a pac on your side early means help in March and November, if you are so fortunate."

• "This is an interesting question. For now, it's the parties, but I could see this changing in the VERY near future. We'll have so many Super PACs in the next cycle...”

• "This is a meaningless question. Is the 3rd party PAC Battleground Texas or TLR or someone else? Is the help cash or in-kind? If it is in-kind, is it specific to your campaign or is it generic (and probably ineffective) GOTV? Is it really help, or is it meddling? Oh, and I've yet to see a 'well financed' political party."

• "Parties are sometimes weakened when they have to 'stand by their man/woman.' PACs can stand with the candidates who agree with their principles only."

• "If you want someone to do your dirty work, then let the PAC take care of it so the 'political party' can say, 'Harrumph! We don't condone such behavior!'"

• "A state party with equal resources as a third- party pac is better for the candidate since they can directly coordinate with the state parties but in many cases, cannot do so with the pac." 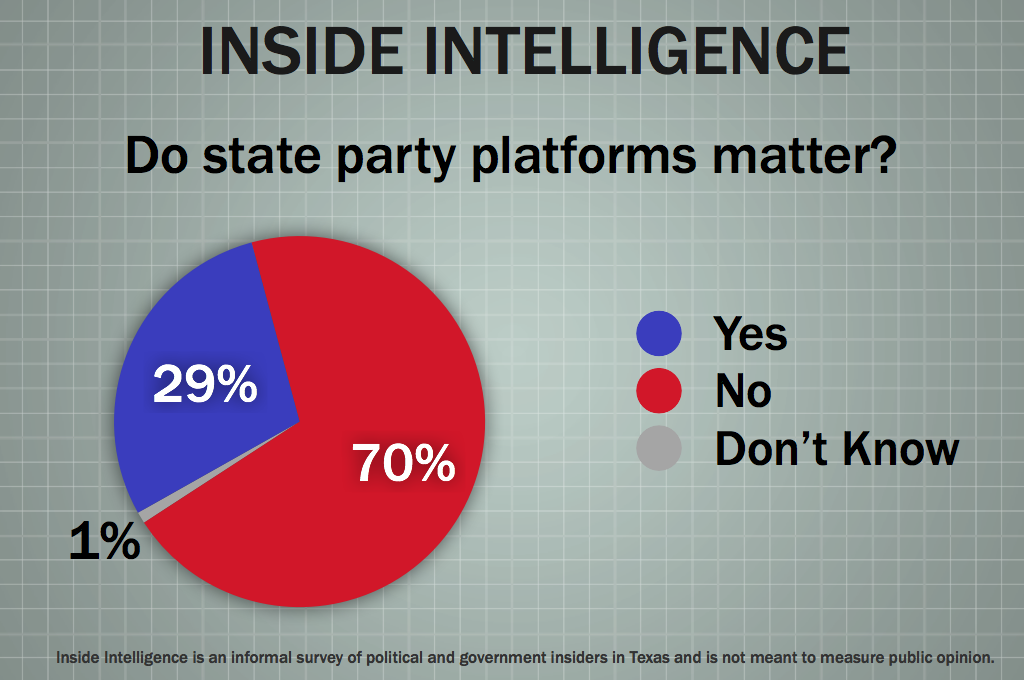 • "And only a slight yes on this one. There are extreme positions in the platforms that are cobbled together by rules-loving delegates that care only about one or two issues. Candidates cannot oppose a platform, but also do not have to agree with it 100%"

• "Platforms matter for energizing party regulars. Platforms don't matter much in campaigns, and usually platforms have only a slight, indirect effect on policy making."

• "Meaningless platform planks keep the extremists on board both parties."

• "Party platforms matter until the day after the elections."

• "For the folks on the edge, yes; for the folks who really get it done in Austin, not even close."