None of the five GOP candidates for agriculture commissioner have much good to say about the federal government and its intrusion on state affairs. But that aversion didn't extend to thousands of dollars they each received in federal farm subsidy payments during the last 20 years. 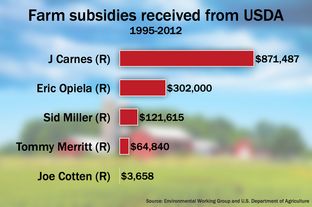 The five Republican candidates received more than $1.3 million in farm subsidies from 1995 to 2012, according to a database compiled by the Environmental Working Group, an organization in Washington, D.C., that advocates for better agriculture policies. They got money for a variety of reasons, including disaster assistance and routine programs that pay farmers if crop prices drop below certain thresholds for products like cotton or wheat.

The numbers do not include the value of heavily subsidized crop insurance policies that farmers have access to, so the amount of government assistance they received could be larger. In addition, some candidates have received other subsidies under their business names.

Despite having benefited from federal agricultural policy in the past decades, and acknowledging the importance of government assistance to farmers, some candidates said they would not have voted for the new farm bill, which President Obama signed last week.

Miller and Eric Opiela, an attorney for the state Republican Party, both said the law's $8 billion cuts to food stamps — a program many conservative Republicans oppose — did not go far enough. Both said food assistance and agricultural subsidies should be considered as two separate pieces of legislation, rather than combined into the massive, nearly trillion-dollar farm bill. Joe Cotten, a financial adviser from Dallas who is also running as a Republican, agreed.

But critics say their attitude is misguided.

"I've had this request made to me many times. Farmers say, 'Charlie, just separate the farm portion from the food stamp portion.' I say, great, we'll have no farm bill," said Charlie Stenholm, a former Democratic congressman from Texas who is now a lobbyist in Washington, D.C.

The number of farmers is too small for them to have political influence without partnering with the larger urban coalition that supports nutritional assistance programs, he said. Without both, there wouldn't be enough momentum to pass a farm bill at all. Agricultural lobbying groups in Texas like the Texas Farm Bureau and Plains Cotton Growers also expressed their support for the farm bill in statements, emphasizing the importance of compromise for the sake of giving farmers and ranchers certainty.

"A vote against this bill accomplished nothing. No reform, no benefits, nothing," Texas Farm Bureau President Kenneth Dierschke said in a statement. "This bill will provide certainty that Texas farmers and ranchers need as they move forward in preparation for the spring and seasons to come."

None of the candidates would provide specifics on how the farm bill might affect their own businesses. But one thing is clear: The so-called direct payments that some of the candidates benefited handsomely from in the past and are given to farmers whether or not they planted a crop in a given year will be ending. A remnant of decades-old farm policy, such payments were made based on what a farmer had grown in the 1980s.

The end of such payments may not result in a financial hit for anyone, though. Congress plowed most of the savings from eliminating direct payments into a number of new programs for producers, including beefed-up insurance opportunities that will be heavily subsidized by taxpayers, and programs that could pay generously if commodity prices drop. That could especially benefit cotton growers like Carnes, though he said that more than half of his business focuses on vegetables, which are specialty crops that do not enjoy such protections.

Miller and Opiela also said they do not grow a lot of commodity crops, and that a primary part of their business is livestock, which does not benefit from crop insurance or special payments. The farm bill does include more permanent provisions for disaster assistance for livestock, however, which the candidates said is a good thing for them and for Texas, a key state in the cattle and beef industry.

Still, accepting any government aid may seem to put conservative Republican candidates like Miller and Opiela, who has often taken aim at the federal government and the Obama administration over its environmental regulations and interference in state matters, in an uncomfortable position. But Opiela defended his acceptance of government aid as a means of offsetting other burdensome federal regulations.

"The federal government has many market-distorting programs that restrict the ability of farmers and ranchers to operate their business in a way that they would normally see fit. These programs balance the increased risks caused by the federal government," Opiela said.

Carnes, whose campaign has focused specifically on Texas agricultural issues rather than on attacking the federal government, said that farming is a risky business that deserves extra protections.

"Nobody's going to turn a check away," he said, but he added that he is glad the recent farm bill eliminates direct payments and replaces them with insurance programs. "I think what’s important is having programs for when farmers are really, really in a bad spot."

Merritt and Miller each received about $10,000 in direct payments between 1995 and 2012. Miller, who also received more than $70,000 from a large payment for disaster relief in 1999, said he agrees with ending direct payments, as did Opiela.

"I do use the crop insurance. I don't think that's unreasonable," Miller said. During a conversation with The Texas Tribune's Evan Smith on Thursday, Miller added that insurance "actually saves the taxpayer money when there is a disaster."

Joe Cotten, a financial adviser from Dallas who is also running and has received less than $5,000 in total farm subsidy payments, said direct payments should continue because farmers are entitled to such assistance.

"The farmer needs to get his money direct," Cotten said. "That's the way it's been done for decades."