Three incumbent Texas state senators find themselves in an unwelcome position on the Texas Weekly Hot List this primary season. Unlike their colleagues running for re-election, for whom the primary is for all intents and purposes a mere rubber stamp, Sens. Donna Campbell, R-New Braunfels; John Carona, R-Dallas; and Kel Seliger, R-Amarillo, are all in fights for their political lives.

One common trait these three share is that their voting decisions on the Senate floor make them outliers within the GOP caucus, with records that are significantly less conservative (Carona and Seliger) or more conservative (Campbell) than we would expect based on the ideological profile of Republicans in their Senate districts. As a result, Carona and Seliger have left themselves vulnerable to criticism that they are insufficiently conservative, while Campbell has left herself open to charges of being excessively conservative, although for obvious reasons her opponents use other phrases to transmit this message.

I set out to analyze the level of ideological congruence between the 31 senators in office during the 2013 legislative sessions and each Senate district’s co-partisans. This details whether or not individual senators have voting records that are significantly more or less conservative than one would expect based on the ideological position of fellow party identifiers in their Senate districts.

Due in no small part to political gerrymandering, 30 of the 31 state Senate districts are presently uncompetitive in November, with 19 solidly red and 11 solidly blue. The exception is Tarrant County’s SD-10. As a result, the voters who count most in these districts are partisans — Republicans in the red districts and Democrats in the blue districts. It is in the primary, not the general election, where most senators’ tickets to the Capitol’s east wing get punched.

Vote-based indices, such as the Cook Partisan Voting Index and the Texas Weekly Index, reveal how partisan a district is, but provide limited information about how liberal or conservative voters in a district are. They are even less able to measure the ideological position of a district’s Democrats and Republicans.

A partial solution to this limitation involves aggregating multiple public opinion surveys to amass a sufficient number of observations for each electoral district, to allow for a more credible measure of the ideological profile of a district’s Democrats and Republicans. Here I use data from six University of Texas/Texas Tribune Polls conducted among registered voters between May 2011 and June 2013. Three items from the survey are used: a respondent’s partisan identification (Democrat, Republican, Independent, Other), ideological location on a seven-point scale (Extremely Liberal [1] to Extremely Conservative [7]) and ZIP code.

These data are combined (with appropriate weighting in instances of zip codes containing multiple districts) to create an index of the ideological profile for Republicans and Democrats in each Senate district. The District Partisan Ideology Index (DPII) is the weighted mean ideological position of Democrats in Senate districts represented by Democratic senators and of Republicans in districts represented by Republican senators. The DPII has a theoretical range of 1.00 (if every Democrat in the district self-identified as extremely liberal) to 7.00 (if every Republican in the district self-identified as extremely conservative). This is an imperfect measure of partisan voters’ ideological orientation in a district, but beats every existing index.

The Democratic and Republican Senators 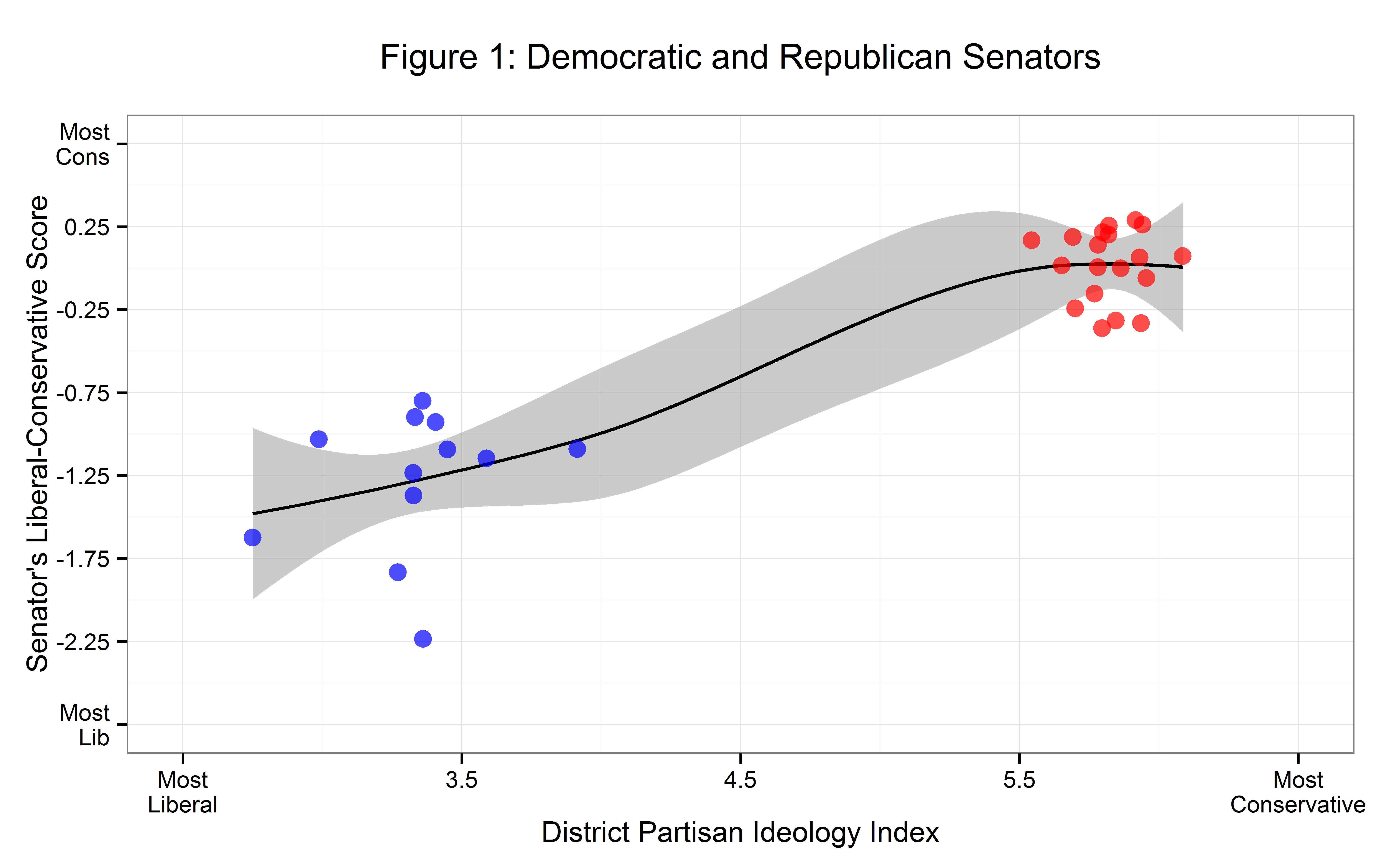 Figure 1, which draws on work by Nate Silver, plots the 31 Texas senators from the 2013 session along two dimensions. On the x-axis is the senator’s DPII while on the y-axis is the senator’s Liberal-Conservative Score (Lib-Con Score). For Democratic districts, the DPII ranges from a liberal extreme of 2.75 in Kirk Watson of Austin’s SD-14 to a high of 3.92 in Carlos Uresti of San Antonio’s SD-19. For the less ideologically diverse Republican districts, the DPII ranges from a low of 5.54 in Georgetown Sen. Charles Schwertner’s SD-5 to a conservative extreme of 6.09 in Troy Fraser of Horseshoe Bay’s SD-24. The Lib-Con Score is based on each senator’s voting record during the 2013 legislative sessions, and ranges from a liberal extreme of -2.23 (Sylvia Garcia, D-Houston) to a conservative extreme of 0.29 (Dan Patrick, R-Houston).

The line in the figure (a LOESS curve) indicates where we would expect a senator’s Lib-Con Score to be, based on the ideological profile of Republicans (for Republican senators) and of Democrats (for Democratic senators) in their district. The shaded area represents the 95 percent confidence interval associated with the senator’s expected location. Only when a senator is located outside of the shaded area can we say with any degree of certainty at all that his or her position is notably different from its expected location. Senators located significantly above the line have voting records that are more conservative than we would expect based on their DPII, while senators significantly below the line have records that are more liberal/less conservative than we would expect.

The relatively small number of cases involved in this analysis indicates we should be cautious in our conclusions. Nonetheless the results do reveal two interesting dynamics within the Texas GOP, where one group of senators would appear to have voting records in the Senate that are noticeably moderate relative to the ideological preferences of Republicans in their districts and another group’s voting records place them noticeably to the right of their Republican constituents.

A Closer Look at the Republican Senators 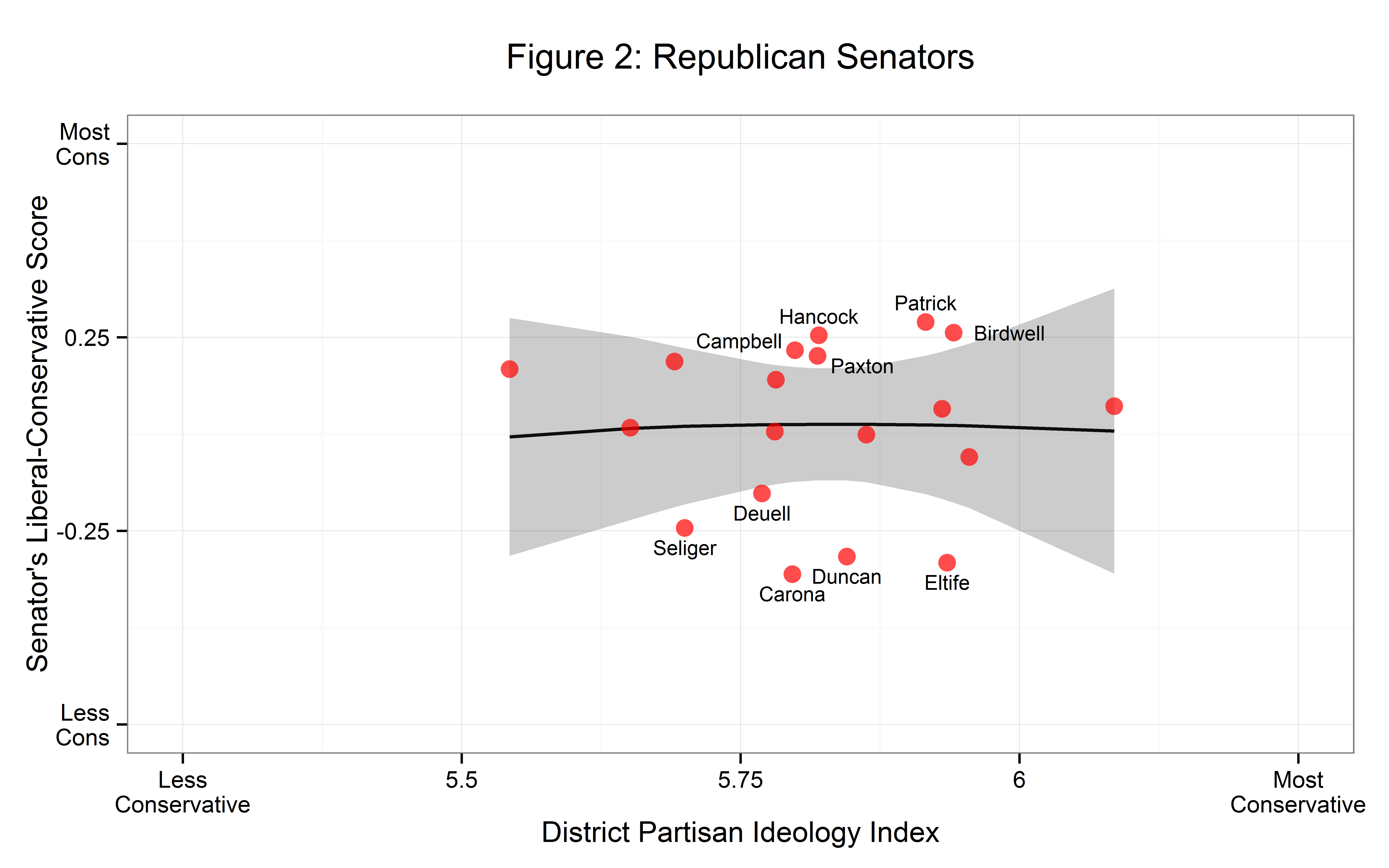 Being seen by primary voters as insufficiently conservative is probably a far greater liability in today’s Texas GOP than is being viewed as excessively conservative. It is thus not surprising that all three of the Republicans located significantly below the line who are running for re-election this year (the terms of the other two end in two years) face primary opposition from rivals who are criticizing them for being insufficiently conservative, among other things. While Deuell, the most conservative of the three, probably is not losing too much sleep over his primary contest against Bob Hall and Mark Thompson in SD-2, Carona in SD-16 and Seliger in SD-31 find themselves facing very credible challenges from Don Huffines and Mike Canon.

Campbell is one of two Republicans (Hancock, who handily defeated centrist conservative Todd Smith in the 2012 primary, is the other) whose voting record locates them at a position significantly more conservative than what we would expect based on their DPII and who at the same time is running for re-election this year. The freshman senator from New Braunfels faces a credible challenge from Mike Novak, whose criticism of Campbell often tends to focus on her being excessively conservative, couched in terms that don’t paint him as moderate. Another knock against Campbell is that unlike her two opponents (Elisa Chan is the third), she is not from Bexar County, which accounts for more than half of SD-25’s population and a large majority of the district’s leading business figures.

On March 4, Republican primary voters will provide partial answers to two very salient questions via their vote choices in SD-16, SD-31 and SD-25. To what extent can GOP legislators possess a pragmatic and moderate conservative voting record relative to Republicans in their district and survive a very credible primary challenge from the right? And can GOP legislators go so far to the right in their floor voting behavior that it adversely affects their ability to win re-election?