This week, we asked the insiders for whether some of the big spending issues of the past — public education, transportation and water — will be issues during this year’s elections and next year’s legislative session.

The short answers: yes and yes. School spending topped the list for election issues, and 70 percent of the government and political insiders said it will reappear during next year’s session. Transportation spending was slightly ahead as a legislative issue and slightly behind the schools as an election issue. State spending on water still registers, but only 43 percent expect to see that one next year, what with voter approval of a water financing initiative last November.

In the wake of the fertilizer explosion in West and earthquakes in Azle that have been blamed on fracking, we asked whether business and environmental regulation rank as campaign and legislative issues. Most insiders said this will not be a subject of conversation during the elections, but 45 percent expect to see legislation on the subject.

We asked the insiders for their comments on those questions, and also included an open-ended question about what issues they expect to see in the 2015 legislative session. A full set of their answers is attached; a sampling follows. 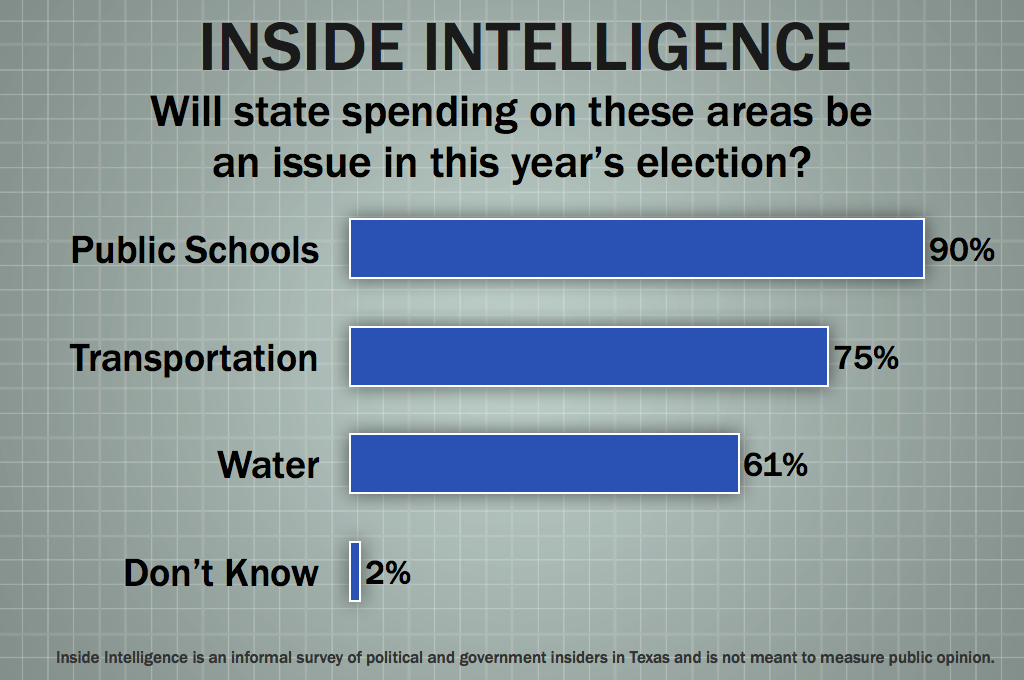 Will spending on transportation, water, and public schools be issues in the 2014 elections? (check all that apply)

• "No, will not be issues in Republican legislative races; unfortunately any 'new spending' is the new 3d rail of R races. Sen. Wendy Davis will try to make issue of the infrastructure and education needs of additional funding but will not get traction with majority of voters (sadly enough)."

• "Transportation dollars are on the ballot, so it'll definitely be an issue."

• "With the reconfiguration of the Water Development Board, water will now join the stalwarts of transportation and public schools as our big, perennial spending issues."

• "So far, of course, the issues are immigration, creationism, and dates of divorce. But it's always possible that something substantive might emerge by November."

• "Public schools will be driven by the court. Transportation is a must, regardless of the small gains in the November Constitutional amendment. Water has money now, but there will be additional efforts to address the delivery of that money."

• "Like a vampire, funding of public schools is an issue that never dies. And when the sun shines on it all you see is smoke and mirrors." 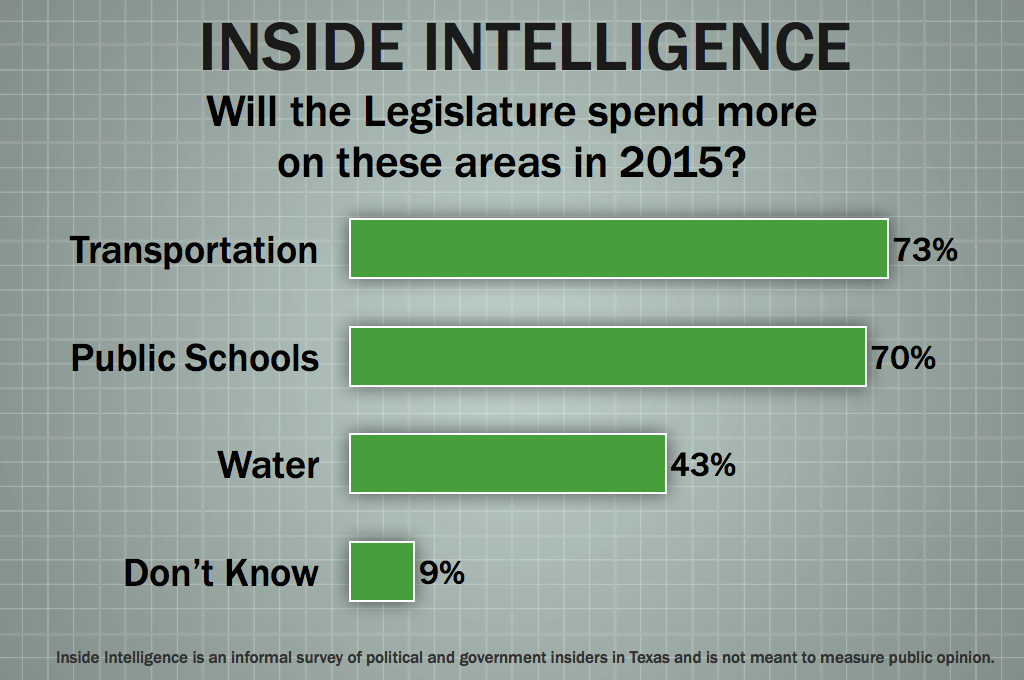 Will the next Legislature vote to spend more money on transportation, water, and public schools? (check all that apply)

• "They'll punt on transportation because the constitutional amendment would have passed by then. Our legislature will be uncomfortable spending more on public schools because the majority party isn't really sure where the money goes."

• "Definitely transportation--they need it. Water probably gets a timeout this session. And public schools can't ever get enough."

• "Nope. Transportation is not yet seen as a crisis and public education has a spending problem, not a funding problem. The general sentiment is that we 'took care of water'"

• "We are coming into our first post-Rick Perry session flush with cash. Who is going to hold the line on spending now?"

• "We can only hope that they will vote to use some of the surplus to add funds to Transportation and Public Schools. But most are so worried about their next election they can't get a majority to do the right thing. You can be conservative and take care of the states infrastructure and children...they are not mutually exclusive!"

• "Only if they can come up with an alternative to new fees and/or taxes. Abbott will be more conservative than Perry."

• "More? Yes. Enough to keep up with inflation and population growth? What is you, a Commie?" 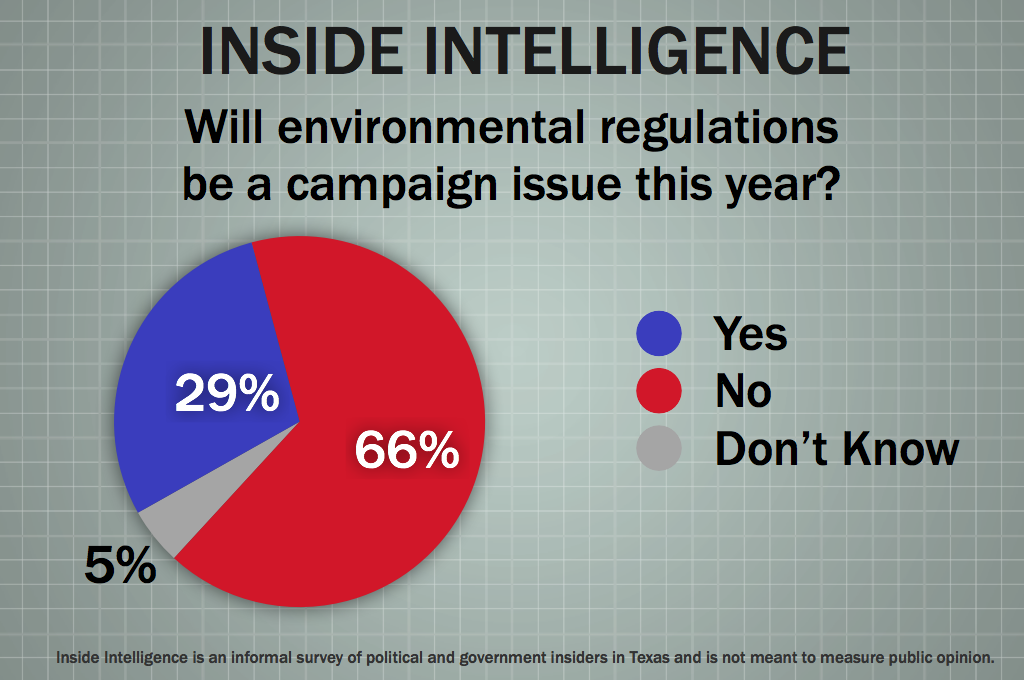 Will new regulations relating to the fertilizer explosion in West or the earthquakes in Azle that some residents blame on energy exploration be an issue in the 2014 elections?

• "It will be addressed in a dog-and-pony method: 1) Bill will be filed; 2) Committee will hear it; 3) A few articles will be written; 4) then it dies. Both of these issues are 'two-session' issues."

• "I doubt anything will pass due to the earthquakes, but I am sure some process will be put in place concerning the storage of large amounts of hazardous materials."

• "Probably not, but then again real issues rarely are discussed on the primary trail. Only who is pure enough."

• "While they may be legitimate controversies, neither is a potent political issue." 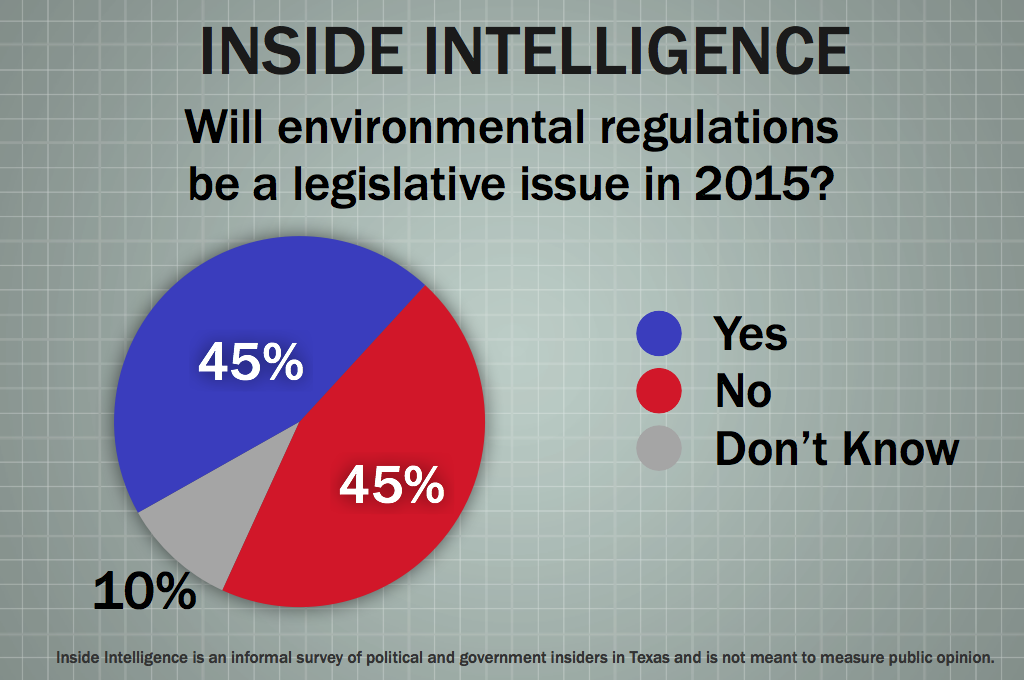 Will the next Legislature approve new regulations in 2015 relating to the fertilizer explosion in West or the earthquakes in Azle that some residents blame on energy exploration?

• "Well now, that's a good question. I'd say the odds are better for the fertilizer explosion than for the earthquakes - for obvious reasons."

• "There simply has to be some meaningful regulations relating to the fertilizer explosions. No choice. I think there has to be some accepted scientific link to exploration and earthquakes before the Texas legislature shuts down fracking."

• "Definitely on streamlining fertilizer regulation, but the science is still out on the earthquakes so what would the law say?"

• "Probably some window dressing regulations, but nothing substantive."

What 2014 election issues do you think will become legislative issues in 2015?