With headlines about the California marriage of Houston Mayor Annise Parker and her long-time partner, Kathy Hubbard, various lawsuits against state “defense of marriage” laws in Utah and Texas and elsewhere, and ongoing conversations about domestic partner benefits, we asked the insiders to weigh in this week.

The majority — 59 percent — said the state should offer benefits to the same-sex partners of state employees. Two thirds of the insiders do not expect these unions to be an issue in this year’s campaigns, and 61 percent said the unions won’t be a legislative issue in 2015.

We collected verbatim comments along the way and the full set is attached. Here’s a sampling: 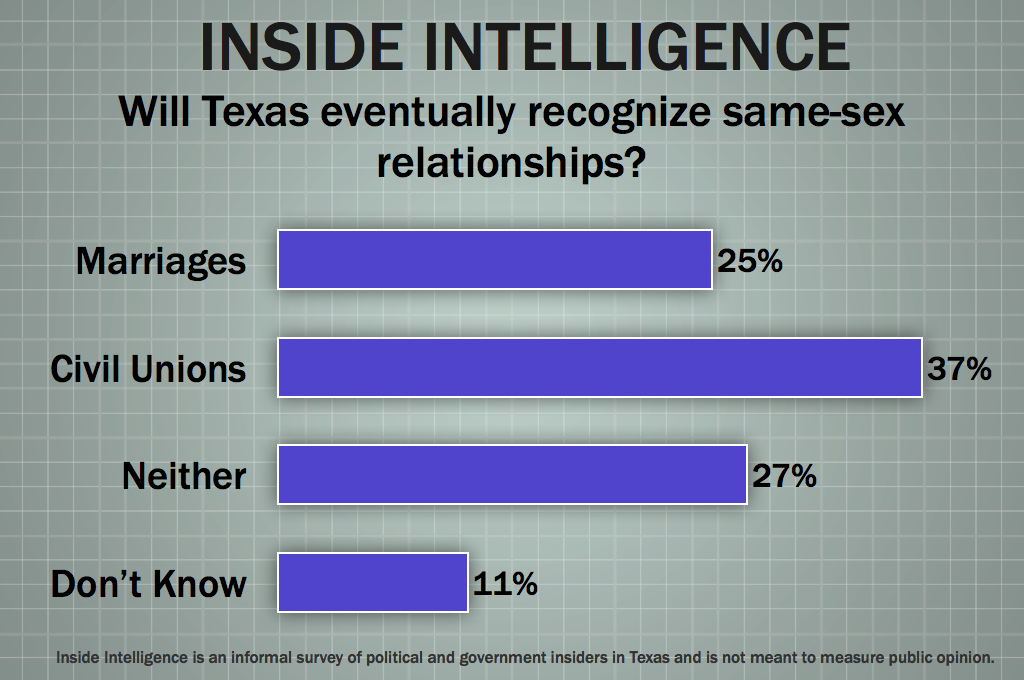 Will the state of Texas eventually recognize same-sex marriages or civil unions?

• "I believe Mayor Parker of Houston sent a clear message when she waited until after her election to get married. Houston's electorate is approaching 70% democrat, but polling showed that even democrats have a hard time swallowing gay marriage. I think civil unions will be more acceptable."

• "Eventually they will be compelled to do so by the federal courts."

• "It certainly won't happen overnight. But with more court cases in the works, and some that have already been filed in Texas, it looks like we're headed to a day where the state won't have a choice."

• "Marriages are sacred and rooted in religious symbolism as between one man and one woman. No-fault divorce, contrary to popular belief, doesn't destroy the institution of marriage. They will remain so until government entities are forced (by judicial fiat or voter will) to either change it or reject it."

• "It is the civil rights movement of our era. People who oppose it will look like Strom Thurmond in 15 years."

• "Eventually? Of course. Our lifetime? Doubtful"

• "First civil unions, then marriages - by the end of the decade."

• "Civil unions? That's so 1996. Gay marriage advocates have dispensed with that transitional step now that Justice Kennedy has cleared the way for the full Monty. But gay marriage will only come to Texas by court order, and that's unlikely to happen any time soon." 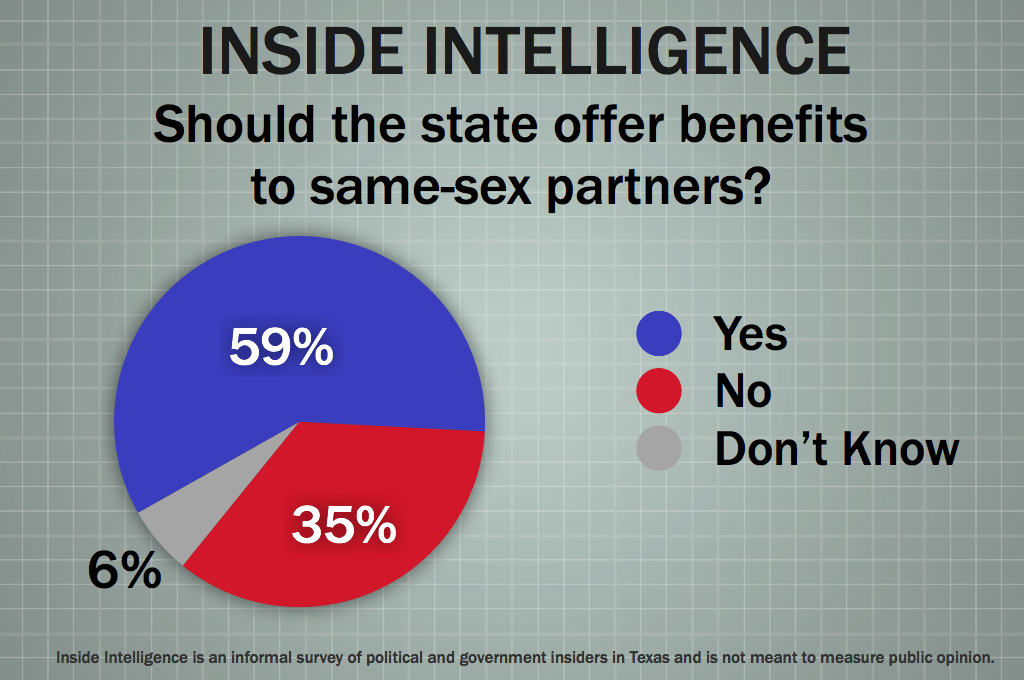 Should the state offer benefits to same-sex partners of state employees?

• "It's a slippery slope. The system will be prone to fraud. The state should first deal on whether or not to allow gay marriage in TX."

• "This is a major reason why same sex marriages must be legalized. Otherwise, people will be showing up at the office demanding insurance benefits for the really cool person they met last Friday who moved in over the weekend. There is no legal definition of 'partner' for either heterosexuals or homosexuals -- (Who am I to say someone is not in a committed relationship with someone just because they only met last week)?"

• "If the State refuses to allow a state employee to enter into a legally-recognized marriage, then the least it could do is allow the employee to provide the same benefits to his or her 'partner' I was allowed to provide for my spouse."

• "If it helps attract top talent, sure."

• "We're busting the budget offering the benefits to the employees we've got. We'll go broke offering it anyone else." 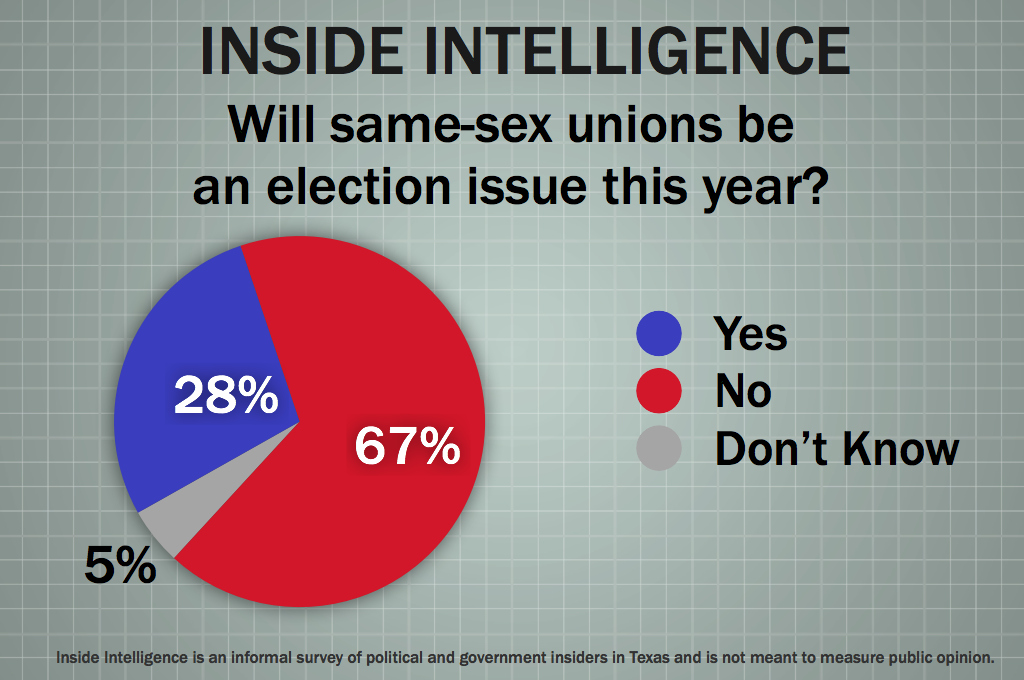 Will same-sex unions be an issue in this year’s elections?

• "I think that is a maybe really. The R's will make it an issue. However, it is becoming similar to abortion. The politicians care about it while the public shrugs its shoulders. It is an issue for the extremes."

• "Democrats have embraced this and Republicans, except for Sarah Davis, all oppose it. Not an issue. No debate."

• "Some Houston area folks might try to make it an issue because of Mayor Parker's recent act, but around the state it's not an issue that comes up when officeholders and candidates talk to voters."

• "It's hard to see how either party could benefit from the issue. True believers on both sides have already picked a party."

• "It will be an issue that will get the Democrats all lathered-up during their primaries."

• "Only in Republican primaries as a talking point." 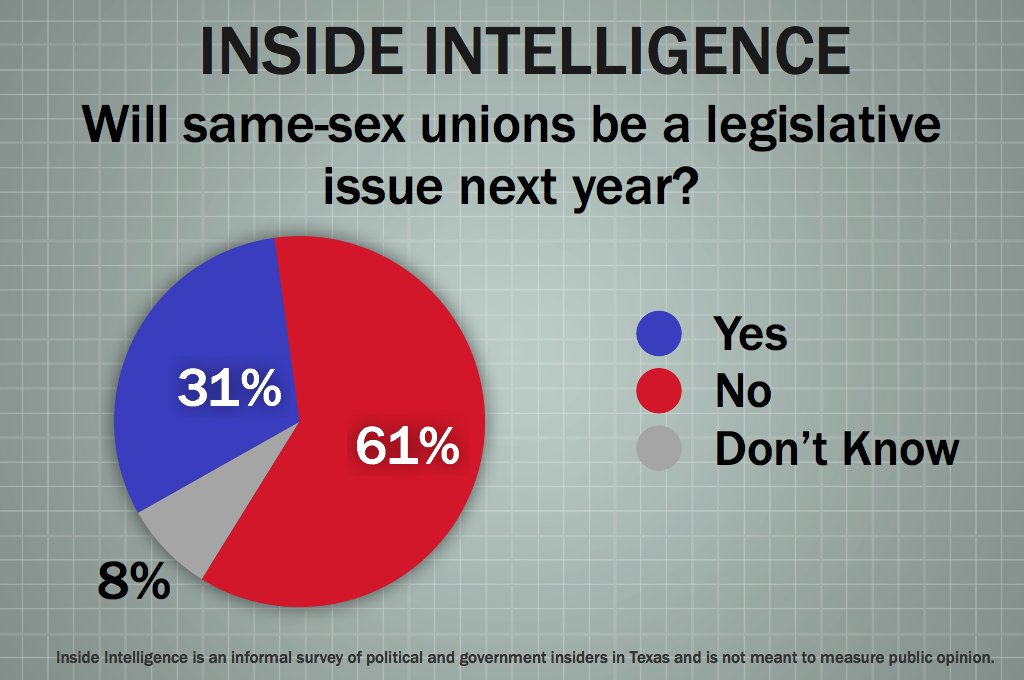 Will same-sex unions be an issue in next year’s legislative session?

• "As the topic of same-sex marriage continues to swirl around the Supreme Court, members will surely file bills on the subject - especially those who want to prove their Republican bona fides."

• "The conservatives will bury it."

• "It'll become an issue if the courts make it an issue. Will SCOTUS take up the Utah case? Which other cases might come before SCOTUS between now and then that will draw out supporters of both sides of the issue?"