Catching spotted sea trout and flounder along the Gulf Coast is more than just a point of pride for outdoorsmen in Texas. The pastime attracts sporting fishermen from around the world, part of a renowned saltwater recreational fishing industry that adds $2 billion to the Texas economy each year.

So the mere suggestion of new restrictions being placed on the saltwater fish has generated heated discussion along the coast — with some claiming that small-time fishermen will be pushed out to make way for richer anglers.

“It’s a big emotional deal,” said Andrew Sansom, who led the Texas Parks and Wildlife Department from 1990 to 2001 and is now executive director of the Meadows Center for Water and the Environment at Texas State University.

Flounder and spotted trout have been the subject of strict regulation for 30 years, when their decimated populations prompted state officials to all but ban their commercial harvest. Only a few dozen commercial licenses to fish flounder exist today.

Last week, officials with the Parks and Wildlife Department discussed the possibility of imposing additional restrictions on the two fish, which are among the most sought after in Texas. In November, during flounders’ spawning season, fishermen can catch only two fish per day. The department is considering lengthening that period of such a low “bag limit,” or maximum allowable catch. In addition, the bag limit for spotted trout may be reduced to five from 10 year-round.

“It’s really about what we call helping the bag distribution, trying to get people to be able to harvest more fish,” said Jeremy Leitz, a statistician for the department.

He added that when it comes to trout, “not many people catch the current bag limit at 10.”

Not everyone agrees. “There’s nothing to show that changing these bag limits has increased the pleasure, has increased the numbers, increased anything,” said Johnny Valentino, whose family manages a fishing camp on Galveston Bay that is popular with saltwater trout anglers. “It’s all about ‘trophy trout’ fishing,” he added, referring to putting sport fishermen who want to catch the biggest fish ahead of anglers who just want to enjoy the sport and put some fresh food on the table. 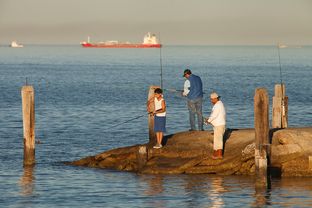 Enlargephoto by: Michael Stravato
Fishing off the Texas City Dike on Jan. 11, 2014.

Strong opposition to new regulations has been voiced from Galveston Bay.

That is understandable, given that the bay is one of the most successful spots for landing trout, said Everett Johnson, a retired fishing guide who is now the editor and publisher of the Texas Saltwater Fishing Magazine.

“They have substantially more freshwater inflow by virtue of their geography,” Johnson said of Galveston Bay. “Trout do better in fresher water,” so anglers there are the most likely to see no need for limiting an already stellar catch.

But Galveston Bay might also represent a culture of fishing that has been slowly disappearing — the angler who fishes for food, Sansom said. Putting limits on their catch “is a cultural assault.”

Sansom agrees that such anglers would be hurt by additional regulation. But the threat to saltwater fish in Texas from severe weather and increasingly advanced and better fishing techniques is real, he said, and regulators should not wait until it is too late to protect them.

“Remember that all of these animals have to live in an environment that sustains them,” Sansom said. “You can’t affect the climate, and the state hasn’t been very forthcoming in setting rigorous inflow standards” for freshwater, so lowering the bag limit is “what you’re left with.”