With campaign finance reports for the last six months of 2013 landing at the Texas Ethics Commission this week, we asked the insiders for some observations.

Right off the bat, a big majority said that the contribution totals in those reports are, in their view, a good measure of a campaign’s relative strength. Size matters, apparently.

Most of the insiders think the motivations of donors are balanced, more or less, between ideological and electability interests. But 26 percent said the donor’s opinion of who will win a race was prevalent, while 19 percent said contributions generally reflect the ideology of the donor.

Once they’ve got that money, which form of advertising is best for campaigns? It depends on the race, if the comments from the insiders are any indication, but asked to name a favorite, most chose TV, followed by mail, followed — distantly — by social media, yard signs, radio, door hangers and websites.

Finally, now that the steady flow of endorsements is underway, we asked about testimonials in primary elections. Trade group endorsements led the pack, followed closely by slate cards/scorecards.

As always, we collected verbatim remarks from the insiders and a full set of those is attached. A sampling follows below. 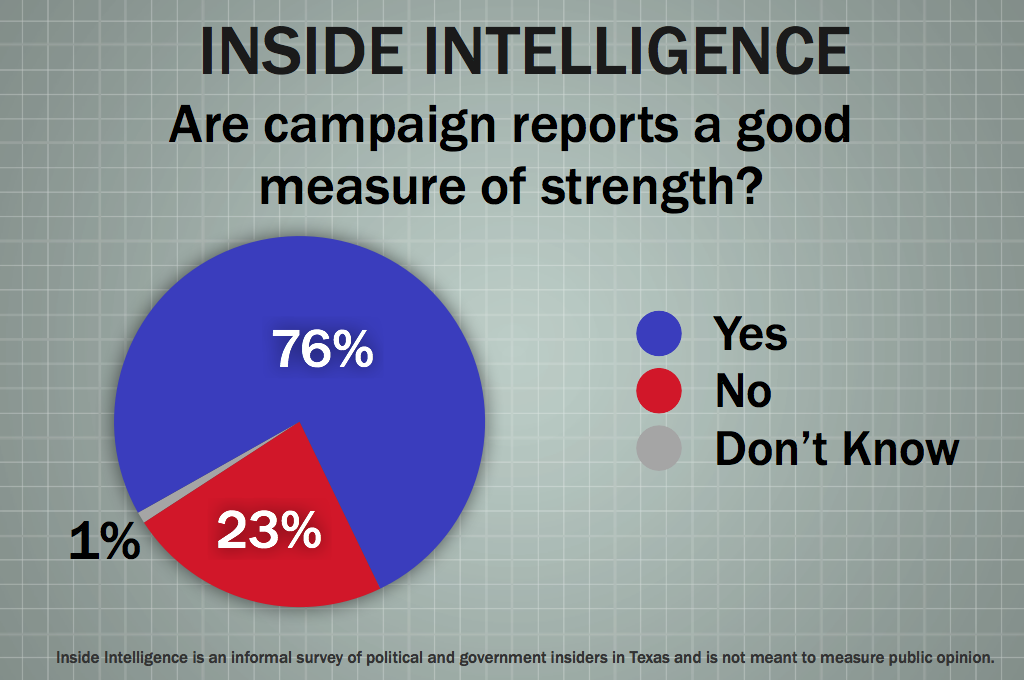 Are contribution totals in campaign finance reports a good measure of a campaign’s relative strength?

• "The campaign totals best reflect the ability of candidate to cover the media and compete, but doesn't reflect the strength of campaign with the voters."

• "It's A factor, but not THE factor. We all know that without money you can't reach voters, but a total amount at this stage cuts both ways. How many overall donors? What percentage are Texas donors vs. out of state donors (looking at you, Wendy Davis)? High dollar vs. low dollar (looking at you, Greg Abbott)? And don't forget about the ability of a candidate to loan his/her campaign a huge sum of money down the stretch (or secure a massive contribute down the stretch)--that money is there and ready to be used, but it might not show up on an early finance report which could counter any perception of it being a weak campaign."

• "Relative strength is right. If it's your own money, or money from people who can't vote for you or one HUGE check from someone then things are not that strong."

• "Yes, if strength is defined as money instead of competence, vision, and leadership."

• "Tony Sanchez and David Dewhurst have shown that the answer has to be 'no.' Not having any money is obviously crippling. But once a campaign has 'enough' it is competitive and the money differential is less important. For example, in the AG primary Branch's opponents will have enough and therefore Dan is likely to lose in a runoff."

• "If you don't have money, you're generally in trouble, so yes."

• "It is just as important to know the source. Totals do not tell the full story."

• "Used to be; but with the rise of the Tea Party, the variables are more numerous." 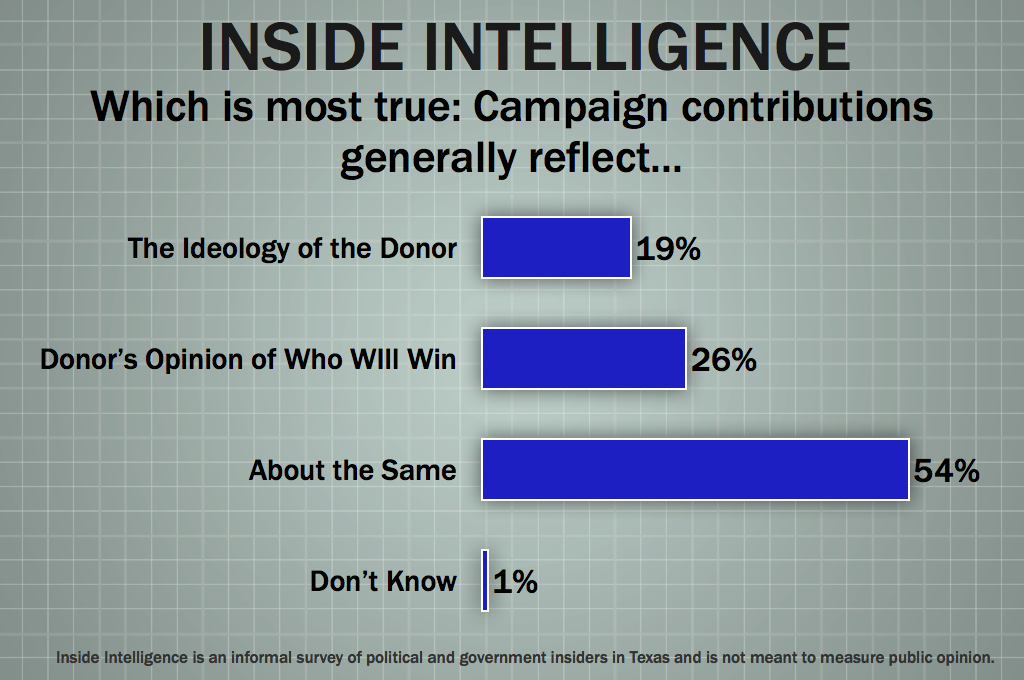 Which of the following statements do you think is most true?

• "Depends on the crowd. Some are ideological donors (especially the smaller dollar donors), while others are practical (like lobby money)."

• "If there was more individual PACs contributing to the candidate than individuals then I would have to say it's the opinion over ideology."

• "It is always advantageous for an insider to be on the winning team when roaming the capitol halls for a living."

• "Depends if you're contributing for future influence or as a voter. I think that one is easy enough to figure out." 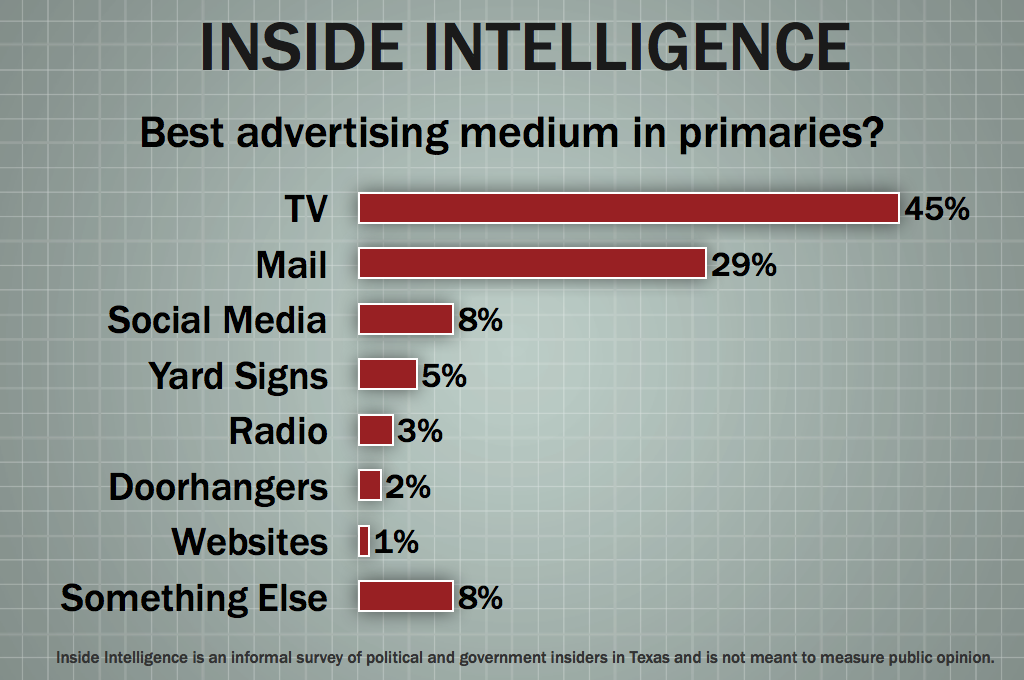 Which kind of advertising is most important in a primary race?

• "A great deal depends on the level of the race. High profile 'top of the ticket' races need TV while down ballot, low visibility contests are better suited to direct mail and direct voter contact."

• "Generally speaking, TV. But for local races or in a primary with relatively few voters, personal connections are more important. IE- if it's possible for the candidate to meet all of the voters in his/her primary, that would be more important than a TV buy. That's obviously not possible statewide."

• "Depends on the size of the race and where it is. In some rural areas newspaper ads can be important. Doorhangers are usually not important unless the candidate is out hanging them on doors and gets to meet people. Radio can be good in rural areas were there's little satellite radio penetration."

• "TV will always be the best if one can afford enough of it."

• "In rural areas, newspapers are still the best advertisement."

• "The most important advertising is the medium your campaign consultant is selling." 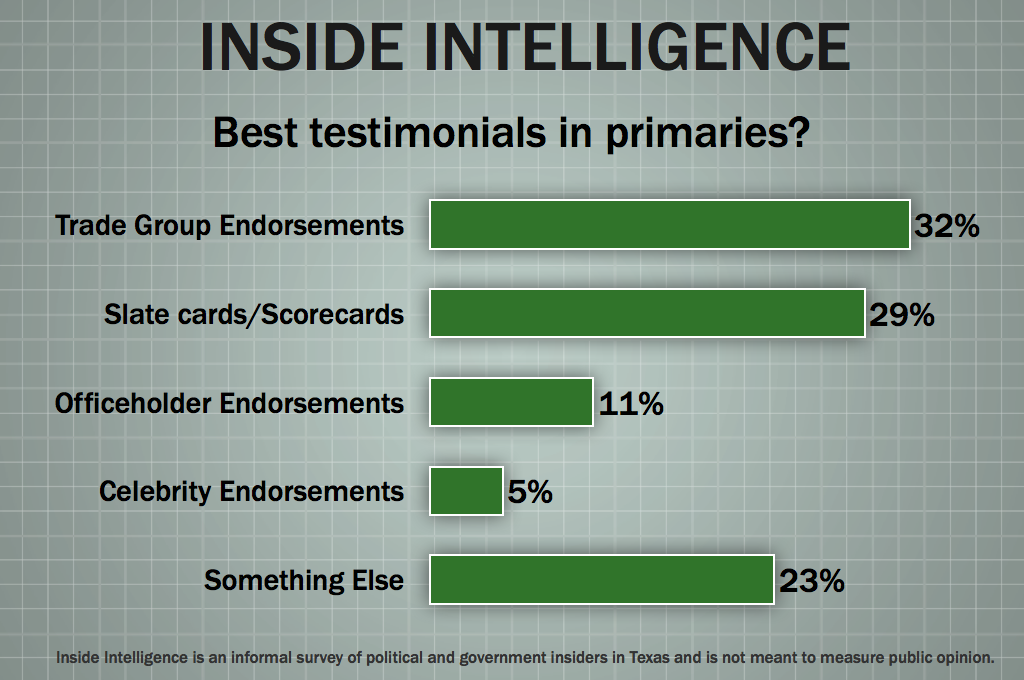 Which kind of testimonial is most helpful in a primary campaign?

• "I believe that locally known and trusted persons within the community offer the best endorsements."

• "Depends on the trade group and race, but they're usually spot on. For example, I care more about what the Farm Bureau says about the Ag Commissioner candidates than what the teachers do."

• "Hard core primary voters in both parties want to know who their groups are endorsing. Right to lifers follow theirs and Annie's listers follow theirs. Business vs. labor...etc."

• "Endorsements are way overrated. What matters most are the attitudes and opinions of the people closest to you whom you know and respect."