PALACIOS — At first glance, the large, framed photo hanging on a wall at the state’s largest nuclear power plant seems to tell a simple story. About 200 smiling men and women stand in block formation behind a long-stretching banner — shades of a high school class portrait, though one posed in front of the domes of two nuclear reactors.

The photo, snapped last summer, is a source of pride at the South Texas Project nuclear plant, about 90 miles southwest of Houston on 12,200 acres along the Colorado River. But for the plant’s officials, it encapsulates anxiety about who will work at the plant in the years ahead.

Each worker in the photo helped build the plant and has kept it running, and the workers make up just a portion of those who will soon retire, taking along years of expertise. The owners must find a younger generation of specialists to keep the plant producing the power that lights two million homes.

“It’s the thing that keeps me up at night,” said Dennis Koehl, chief executive and chief nuclear officer at the STP Nuclear Operating Company.

The company’s 1,200 employees average more than 22 years of experience, and in the next few years, about 40 percent will be eligible for retirement. 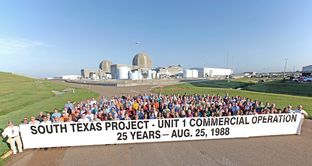 Enlarge
This August 2013 photo shows more than 200 of the roughly 350 current employees of the STP Nuclear Operating Company who were with the company 25 years ago, when it added its first reactor to the Texas grid. In a handful of years, most will be eligible for retirement, worrying company officials. Photo courtesy of STP Nuclear Operating Company.

A shift in economics and public sentiment has stalled the state’s nuclear power sector, which not long ago was considered poised for growth. But as graying baby boomers prepare to hang up their Hazmat suits, officials are racing to find new talent, pouring millions of dollars into education programs in hopes of training new workers in an industry that produces about 12 percent of the state’s power.

The plant is not alone. The situation is not much different at the state’s other nuclear power plant, Comanche Peak in North Texas, or at the 100 other reactors across the country. But industry representatives say a national educational network — largely an outgrowth of a model developed in Texas — has helped ease longstanding concerns about a labor shortage.

In the mid-2000s, Texas considered adding as many as eight reactors. With big plans for expansion, the Texas A&M University System Board of Regents in 2007 approved the Nuclear Power Institute at College Station — a hub of statewide collaboration between high schools, community colleges and universities — to train the next generation of workers.

“The next years will be an exciting time for nuclear power in Texas,” Kenneth L. Peddicord, the institute’s director, said at its unveiling. “We’re glad to be part of it.”

But that boom never hit.

STP is the only Texas company asking federal regulators to license a new reactor. But federal regulators have frozen review of all applications — STP’s included — as they address the waste storage issue that has plagued the industry.

Koehl said that even if officials quickly resolved the issue, investors would be unlikely to finance a new reactor anytime soon.

In a country awash in cheap natural gas, investors have largely frowned on building nuclear plants, which are far costlier. In addition, the industry is still reeling from the public relations nightmare caused by the meltdown of Japan’s Fukushima Daiichi nuclear plant in 2011.

Still, nuclear power officials in Texas and elsewhere say they need plenty of new labor as older workers step aside.

Beginning in the early 2000s, the industry realized it faced a looming threat. Its work force was made up largely of those who built reactors in the 1970s and 1980s and transitioned into jobs running the plants. That population, infused with years of experience and knowledge, would not be around forever.

“When we stopped building in the U.S., we stopped seeing massive numbers of new workers flock to the industry,” said Elizabeth McAndrew-Benavides, manager of strategic work force initiatives at the Nuclear Energy Institute in Washington. “It was a very large issue for us.”

Not everyone is equipped to operate and maintain a reactor, or to monitor radiation levels inside a plant and on its own employees. Nuclear energy officials feared they would soon lack the manpower to operate the country’s current reactors as their licenses were renewed, let alone the new ones.

“It’s at all levels, from the managers on down,” Koehl said of his company’s needs, adding that specialty engineers and people with other industry-tailored skills are particularly hard to find.

That includes Jesse Wells, who has coordinated 18 of STP’s planned outages, the monthlong powering down of a reactor to refuel it and perform thousands of maintenance operations — a process that happens once every year and a half.

Wells, who came to STP after spending years working with the Navy’s nuclear program and has stayed for three decades, is set to leave in May in what he calls the plant’s first wave of retirements.

Wells, 57, said he was anxious about the move but only on a personal level. He had no doubts, he said, that someone capable would fill his job. Still, he put off postponing his initial retirement plans to work one last outage alongside his successor.

Company officials have unleashed an aggressive plan to transfer knowledge within the company, and to educate students to fill voids left by retirement.

The company, Matagorda County’s biggest employer, is mostly looking in its backyard. In the last six years, it has spent millions of dollars designing the curriculum at local high schools and community colleges and awarding scholarships to students in the area.

Graduates of the two-year nuclear power technology degree program at Wharton County Junior College, for instance, can expect to earn starting salaries of $65,000 to $70,000 if plant officials, who closely monitor enrollment, offer them jobs.

“We’re trying to homegrow as much as we can,” Koehl said.

If STP grows more nuclear experts than the company needs, Koehl said, graduates are likely to find work elsewhere in the United States or in countries with much bigger ambitions for nuclear power.

That is because the Matagorda County programs are plugged into the state’s Nuclear Power Institute, which has been a crucial stop for recruiters worldwide and helps track industry needs.

Peddicord said the energy market shift has spurred the institute to increasingly look outside of Texas, an “evolution” in its original focus on cultivating in-state talent.

As the first state to develop such a consortium, Texas has served as a model for others, such as Georgia and South Carolina, where the country’s new large-scale reactors are under construction. That, McAndrew-Benavides said, has helped plants feel more confident about meeting their future needs.

“Texas beat everybody to the punch,” she said. “You guys are absolutely ahead of the game.”