For the first Inside Intelligence of 2014, we asked the insiders about some basic election policy, such as when the primaries should be held.

We started with a recent Republican proposal to move the presidential primaries to an earlier date in hopes of getting Texas into the mix before the party’s nominee in other states. The insiders split down the middle, with 8 percent saying they are undecided.

What about moving the March primaries to a date later in the year, a proposal advanced by advocates of a shorter election cycle? The insiders didn’t like that one, with 63 percent saying the March date is just fine.

We collected verbatim comments along the way, and a full set of those is attached. Here’s a sampling: 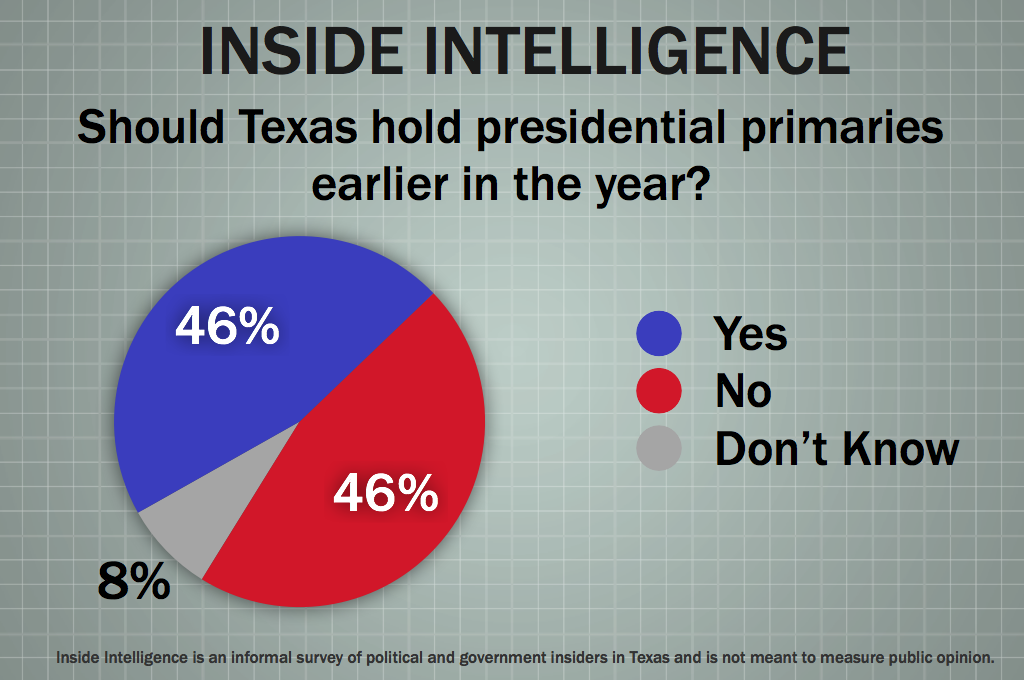 Should Texas move its presidential primaries to an earlier date to ensure that the nominations are still contested by the time the candidates get here?

• "It's so expensive to run a primary campaign in a state the size of Texas that moving the date up virtually ensures the nominations will go to well-funded, establishment candidates every time."

• "The only option would be if the Presidential ballot was separate from the rest of the party primary races. Then, it might be acceptable."

• "Year round politics is destroying the democracy. There needs to be time to govern. After all, that is the point of the jobs."

• "Texas should move up in order to become a bigger player in presidential politics. Currently, Texas is good for fundraising purposes and not mining votes. We need the candidates to spend that good ole Texas money on communicating their views and positions to Texas voters. Turn those Texas dollars over here in the state."

• "I kinda like the idea because how in the Hell did this country allow Iowa and S. Carolina to be king makers?" 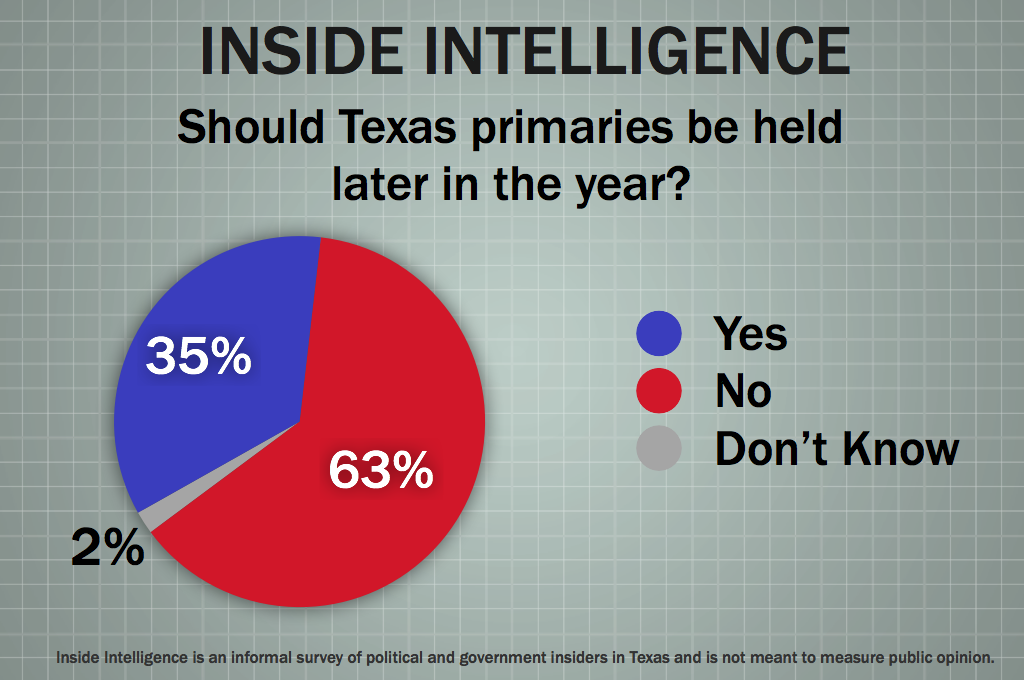 Should Texas primaries be held later in the year to shorten the biennial political season?

• "As we saw in the Dewhurst / Cruz race, later primaries give insurgents more time to get their message to the voters and minimizes the role establishment money plays in selecting the winner."

• "I always liked the May primaries. It kept the primary battles from bursting through the holiday season."

• "It's never shortened. The primary will just live longer."

• "Current system is ferociously pro-incumbent.... since election usually starts Jan. 1, challengers in this big state don't really have an opportunity to make their case" 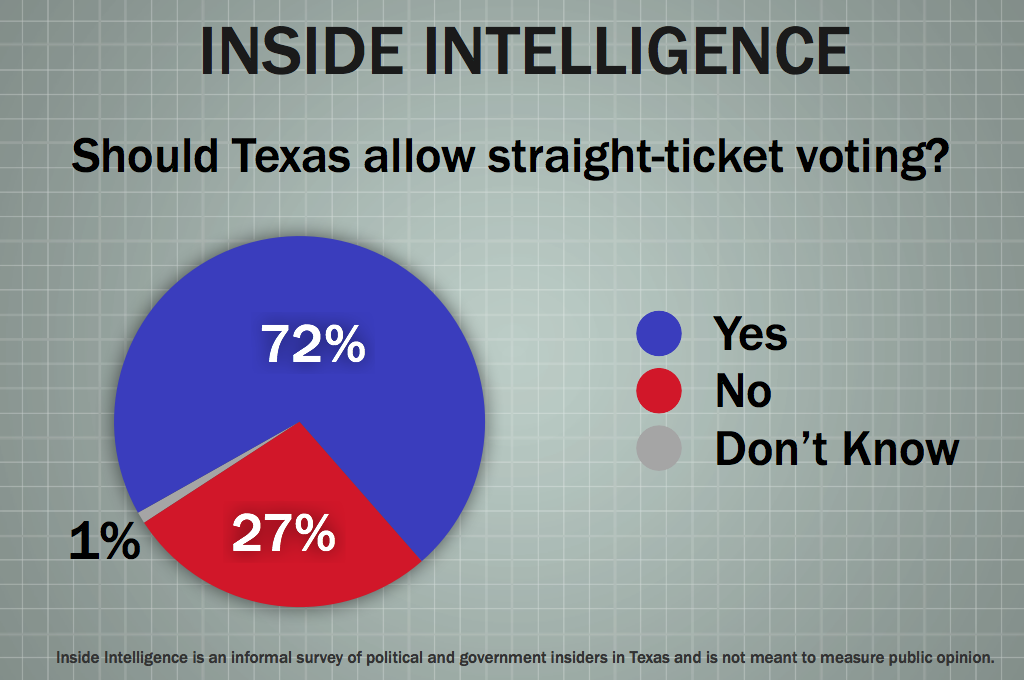 • "Parties invest money and effort vetting candidates and building their brand and they should be able to rely on that in down ballot races."

• "Nearly half Texas voters use this option. Why should it be taken away from them? By the way a majority of Straight Ticket Voters are Republicans statewide so why would they want to repeal this option?"

• "For everything but Judges."

• "Would abolishing straight-ticket voting mean a more informed electorate? I doubt it."

• "It should not be unconstitutional to be too lazy to think." 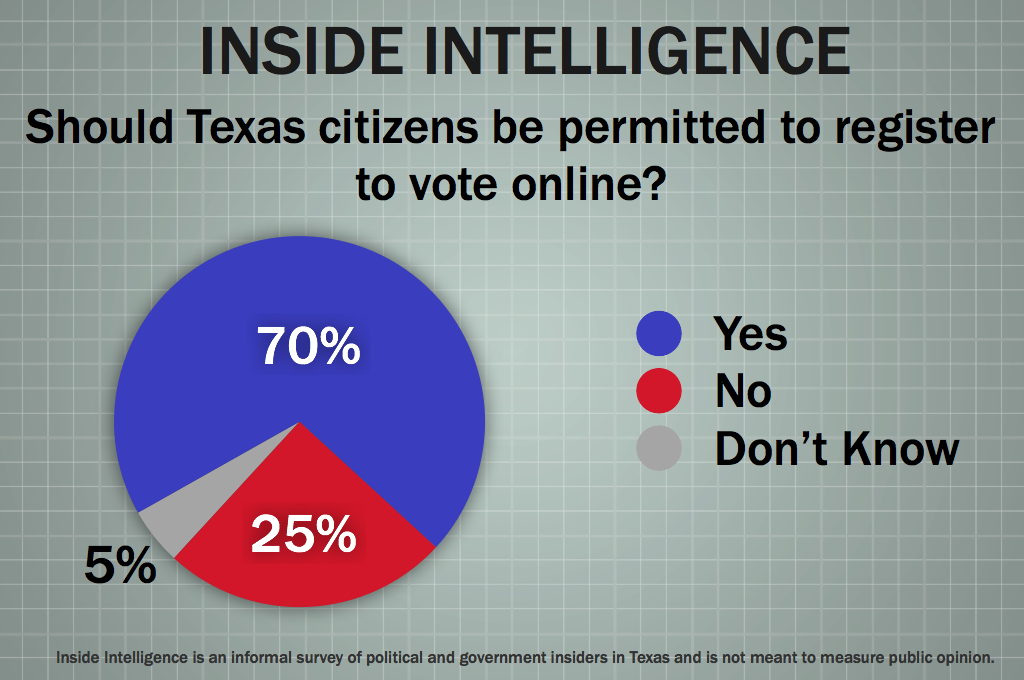 Should Texas citizens be permitted to register to vote online?

• "There is more integrity in the process by requiring voters to go to polling places or to mail in paper ballots than there is in the vagaries of the internets."

• "After what foreign hackers just did to Target, one can only imagine what they'd do to American election processes."

• "Even better, let's have day-of-election registration. Making the wild assumption that we all want more people to participate."

• "Technology has developed to allow this to be a viable option."

• "The web is vulnerable to hacking.... all voting procedures should be kept away from it."