AZLE — Melanie Williams does not want to abandon her home. She has been there, done that. That’s why she’s here now.

After Hurricane Katrina forced her to leave New Orleans eight years ago, the 47-year-old took refuge in this small town near Fort Worth — about 300 miles from the Gulf Coast waters that engulfed her former life.

But, once again, Williams is living on shaky ground — this time, literally. She says a recently cracked foundation and busted water pipe have made her decade-old house unlivable, leaving her struggling to pay rent for an apartment on top of her mortgage as she awaits the fixes.

Williams blames a recent string of earthquakes, whose rumblings she never expected to feel when she settled here.

“I’ve had it up to here with the disasters,” she said in an interview. “It’s like they’ve been following me.”

At least 32 earthquakes have hit North Texas since Nov. 1, according to U.S. Geological Survey data. Most of those quakes, whose magnitudes ranged from 2.0 to 3.7, shook towns near the border of Parker and Tarrant counties, which sit atop the Barnett Shale and are pockmarked by natural gas wells and injection wells used to dispose of drilling waste.

Williams is far from the only local rattled by a phenomenon once unheard of in the region. As a growing body of research links the drilling of disposal wells to earthquakes, many North Texans — fearing economic and safety impacts — are asking state regulators to work more quickly to address the problem, or at least acknowledge its roots in oil and gas production. 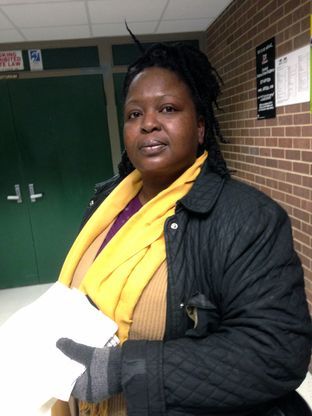 The Texas Railroad Commission, the state’s oil and gas regulator, has not addressed the phenomenon, nor has it declared the wells a definitive cause of the earthquakes. But a groundswell of local concerns has kept the issue on the agency’s radar.

“I am very concerned and involved with this issue,” Porter told more than 800 people who crammed into the Azle High School auditorium on Thursday. But he added that the commission is not yet convinced of the drilling-earthquake link.

"We have to take our actions based on science and facts, not speculation that appears in newspaper articles and blogs,” he said, drawing a response of grumbles.

The crowd also expressed frustration when agency officials, peppered with questions, refused to answer any, saying they planned to simply listen. Porter did say, however, that the agency was working with the state geologist on a potential study that would further examine the issue. He did not give a timeline, and left the building before media could ask questions.

On Friday, Porter's office told the Tribune he was not available for interviews. In a press release, he said, "I look forward to sharing the comments and concerns I received with my fellow Commissioners as we continue to study any possible causation between oil and gas activities and seismic events."

The release also said Porter is participating in a U.S. Environmental Projection Agency work group that includes geologists and officials at other state agencies.

Walter Graves had never felt an earthquake in his 65 years in nearby Springtown — until two months ago.  The biggest quake jolted Graves and his wife, Cindy, out of sleep, shaking their bed.

“You can hear it coming,” he said.

“And then you heard a loud boom,” Cindy chimed in.

Now, Graves reckons himself a sort of expert, at least compared with where he started. On his smartphone, he frequently fiddles with a U.S. Geological Survey app that displays information about earthquakes recorded throughout the world. When a new quake strikes nearby, he enjoys guessing its magnitude from his living room recliner.

“I can get within a couple of points now with the calibration in my butt,” he said.

But to Graves, the phenomenon is not all fun and games. Though he said he has yet to see any damage to his home, he is concerned about what might happen next.

“Whose to say these aren’t going to grow worse in size?” he said.

The quakes felt here are considered relatively mild, and there have been no reports of major damage, though dozens of residents say their homes, like Williams’, have suffered problems, such as cracks in walls, floors and foundations — damage that typical homeowners’ insurance policies do not cover. And now, some are considering spending an extra $400 per year on earthquake insurance.

“I’m not sure if I can sell the house now. It’s not a good investment for anybody,” he said. “It’s like we’re all stuck now.”

Tracy Sutton, a local real estate agent with Century 21, said none of her clients have rejected a home due to earthquake damage, but she has recently dealt with two prospective buyers who decided not to settle in the area, citing the quakes.

“I’m just concerned that if it doesn’t stop, it could affect me and my business,” she said.

Earthquakes are generated by slipping faults, or fractures. Experts say that injecting fluids at high pressures can relieve pressure in some faults, causing them to slip.

Now, with the country gripped in an unprecedented oil and gas boom, many are eying the proliferation of disposal wells — final resting spots for millions of gallons of wastewater from the drilling fields — as the likely spark of the recent spate of tremors.

As the nation’s oil and gas leader, Texas is home to more than 7,500 active disposal wells, according to the Railroad Commission.

Counting the recent cluster, about five dozen earthquakes have been recorded in North Texas since 2008. Before that, there were none.

In 2008 and 2009, folks in the Dallas-Fort Worth area were shaken by three series of earthquakes, with magnitudes as high as 3.3. In a study prompted by those concerns, researchers at Southern Methodist University and the University of Texas at Austin concluded that local disposal wells were a “plausible" cause, though they found it “puzzling” that the tremors were concentrated in just one or two locations in a region that had more than 200 disposal wells.

In a study published in August 2012, Cliff Frohlich, a University of Texas seismologist, found that most reliably located earthquakes in the Barnett Shale occur within two miles of one or more injection wells.

“You can't prove that any one earthquake was caused by an injection well," Frohlich said at the time. "But it's obvious that wells are enhancing the probability that earthquakes will occur."

In Texas, Chesapeake Energy voluntarily shut down a disposal well at the Dallas/Fort Worth Airport following the region’s quakes in 2009, though it said research on the issue was not settled.

“RRC staff is closely following various studies that are being conducted to determine possible man-made causes of recent seismic events,” the agency’s website says. “Texas has a long history of safe injection, and staff has not identified a significant correlation between faulting and injection practices.”

"Discussion of seismic activity and any possible correlation to oil and gas operations is a worthwhile exercise and the issue warrants robust investigation to expand upon the research we have on hand today," Deb Hastings, the group's executive vice president, said in a statement.

"It's almost a traumatic event. I'm reliving it again," she said about her housing woes. "But I'm not moving; I'm going to be steadfast."