With candidates in all but one race hitting the filing deadline for the March primaries, we asked the insiders about the year ahead and to tell us what surprised them in the filings.

First things first: Two thirds of the insiders said the year ahead will go to the establishment wing of the GOP and not to the insurgents. And in line with that, 77 percent said that U.S. Rep. Steve Stockman, R-Friendswood, poses no serious threat to U.S. Sen. John Cornyn in March (Stockman’s last-minute switch from a reelection race to the Senate race is the reason the filings are still open on the Republican side in CD-36).

The rest is text and not numbers: We asked, based on the filings, which Texas officeholders are most likely to lose their jobs next year and which filings were most surprising. Spoiler alert on that second question: Stockman!e

We collected verbatim comments along the way and those are attached. Here is a sampling: 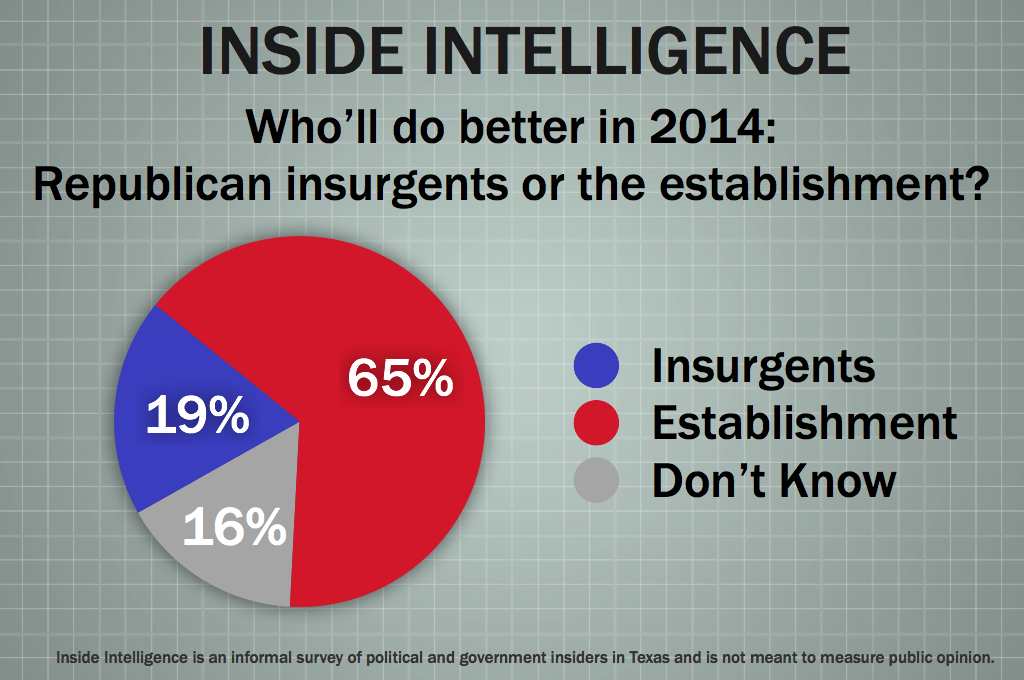 Will this be a year for the insurgents or the establishment in the Republican primaries?

• "Too uncertain to predict, but the process will be interesting. It remains to be seen how much the moderates will gain support as part of the effort to not let the opportunities the Democrats have handed them go to waste in fighting over who is the most conservative."

• "I'm the quintessential 'I don't know' answer… I do, however, firmly believe this is the watershed election that will answer the question as to who owns the primary voters in the Texas GOP."

• "The 'Insurgents' are about to be dealt a blow to their cause. They have overplayed their hand since last election cycle."

• "Normal people are getting tired of guerilla politics"

• "If the insurgents win one more time, they WILL be the establishment."

• "They are more angry now than they were two years ago."

• "The goal is to win elections. Republicans know that. They will back winners -- who are mostly establishment. Of course, there are a few flagrant, anti-Tea Party moderates who should worry." 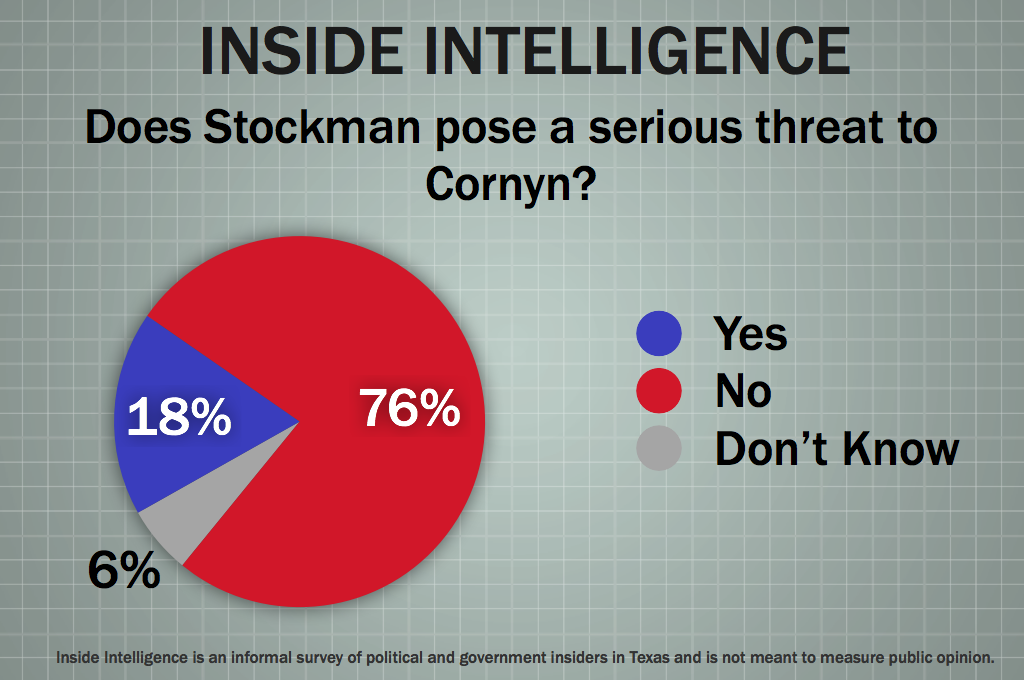 Does Steve Stockman pose a serious threat to John Cornyn in the 2014 primary for U.S. Senate?

• "This time two years ago, most of us would not have thought that Ted Cruz was a contender."

• "Cornyn ultimately wins but it's scary."

• "Is this a serious question?"

• "Many a far righter thought 'If the crassly (and brilliantly) opportunistic Ted Cruz can do it...' Only one far righter had the guts to take a crack of his own. Gotta respect his spine, even if the policy and words send shivers down my spine."

• "Steve Stockman poses a serious threat to people who take politics seriously. That guy is going to entertain us for a couple months."

Which incumbents (for any offices in Texas) are most likely to lose their seats in 2014?

• "Possibly Schaefer, JD Sheffield and Stickland in the House. Harper Brown is on the edge. There could be some changes in El Paso especially Naomi Gonzalez. Donna Campbell could have a run for her money with Bexar County's Novak."

What did you think was the biggest surprise in this year’s candidate filings?

• "Stockman is an obvious answer, but certainly others were ready to immediately take advantage of the opportunity."

• "That Charlie Geren did NOT get an opponent… what was MQS thinking? Tarrant County? They should have flooded him with opponents."

• "The biggest surprise/disappointment is that someone like Van Taylor will be a new state senator barring a Libertarian miracle."

• "The biggest surprise was who didn't get an opponent...a lot of freshman get a free pass. Not good."

• "Stockman and no Pauken"

• "Harvey Hilderbran did NOT switch to agriculture commissioner"

• "The lack of depth of the Democratic candidates past Senators Davis and Van de Putte. If the young Democratic guns of the House don't believe, why should the rest of us?"