A faddish proposal about choosing legislators and a vacancy at the top of a major university system got the attention of our insiders this week.

An overwhelming majority said they would oppose repeal of the 17th Amendment — the one that moved selection of U.S. senators from legislators to voters. If that constitutional provision changed, 57 percent said John Cornyn would have been chosen for the Senate by the Legislature — as he was by voters. But 78 percent said legislators would not have given the job to Ted Cruz.

In a popularity contest among chancellors of the state’s public university systems, the insiders judged Texas A&M’s John Sharp the best, followed by Texas State’s Brian McCall and the University of Texas’ Francisco Cigarroa.

We closed with a question about Texas Tech, where Chancellor Kent Hance is stepping down next year. Given the choice, 53 percent of the insiders said the replacement ought to have the combined talents of a highly respected academic and a former officeholder with fundraising skills. Another 28 percent chose officeholders, and 9 percent chose academics.

As always, we collected verbatim comments about the questions and a full set of those is attached. Here’s a sampling: 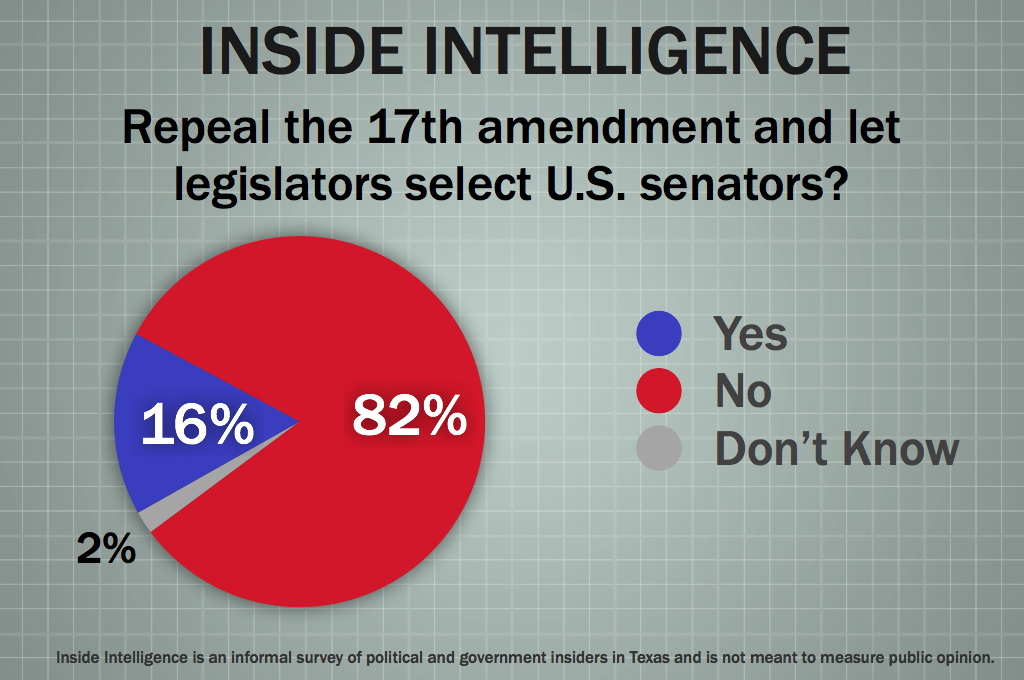 Some have suggested repealing the 17th Amendment and putting the selection of U.S. senators in the hands of the state legislators. Do you think that’s a good idea?

• "Wow. What a colossally bad idea. 'The U.S. Senate...now brought to you by the people who handle redistricting!'"

• "No member of the U.S. Senate has been fully responsive to their State interests in all matters in the past 40 years-- reason enough to go back to the original Constitutional concept!"

• "Legislators would be tempted to vote for other legislators . . . especially if it opened up opportunities to move up the food chain."

• "It would probably be good for federalism but would obviously never happen. One of the great paradoxes of American politics is that the a lazy and ill-informed electorate cherishes its right to vote."

• "People may think I am crazy for choosing yes, but I think a state should have some representation in the federal government and I believe that is how the founding fathers set it up. Also, I think it would have a moderating effect and Ted Cruz would no longer be one of our US Senators."

• "Politicians electing our politicians doesn't sound like a solution to anything."

• "Actually yes, it is. It will help restore some balance and return power to the states. It will have an amazing impact on states rights, reduce unfunded mandates on the states, and stop federal government encroachment."

• "It won't happen. But if it did, the ship would almost immediately stop taking on water and would have some chance of righting itself."

• "This is the dumbest idea I've heard in a long time." 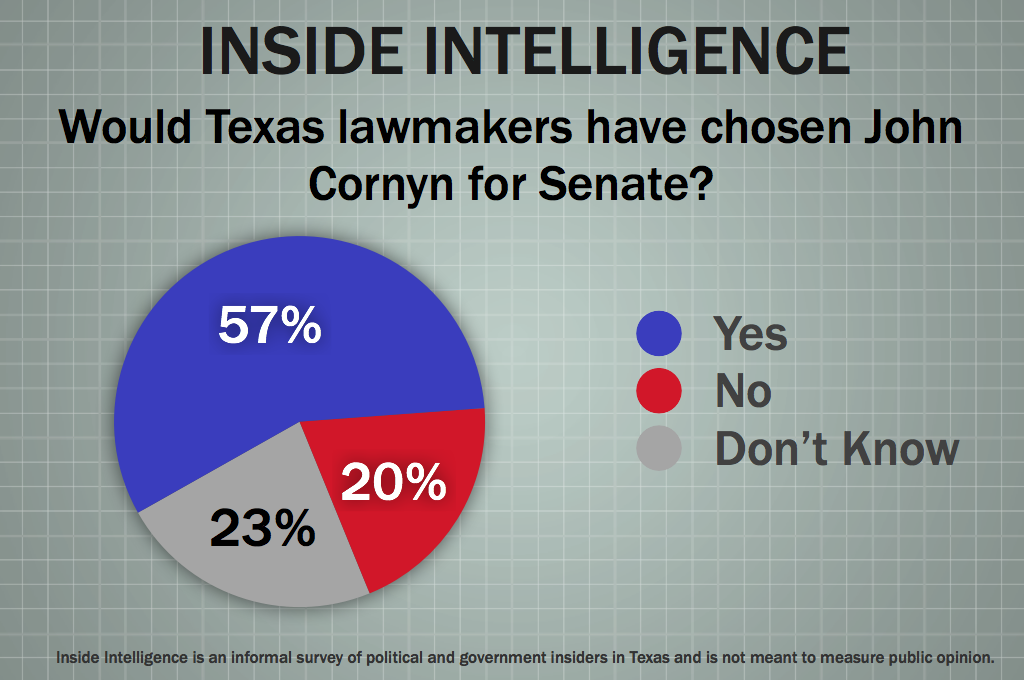 Would the Texas Legislature have chosen John Cornyn for the Senate?

• "When he was originally elected yes; today probably not."

• "The current Texas Legislature is ruled by the business establishment, and Cornyn is an establishment figure."

• "Yes - the tea drinkers are loud, but thankfully not the majority in the Texas House and Senate."

• "No. The Legislature is almost always going to choose one of its own to 'promote' to Washington." 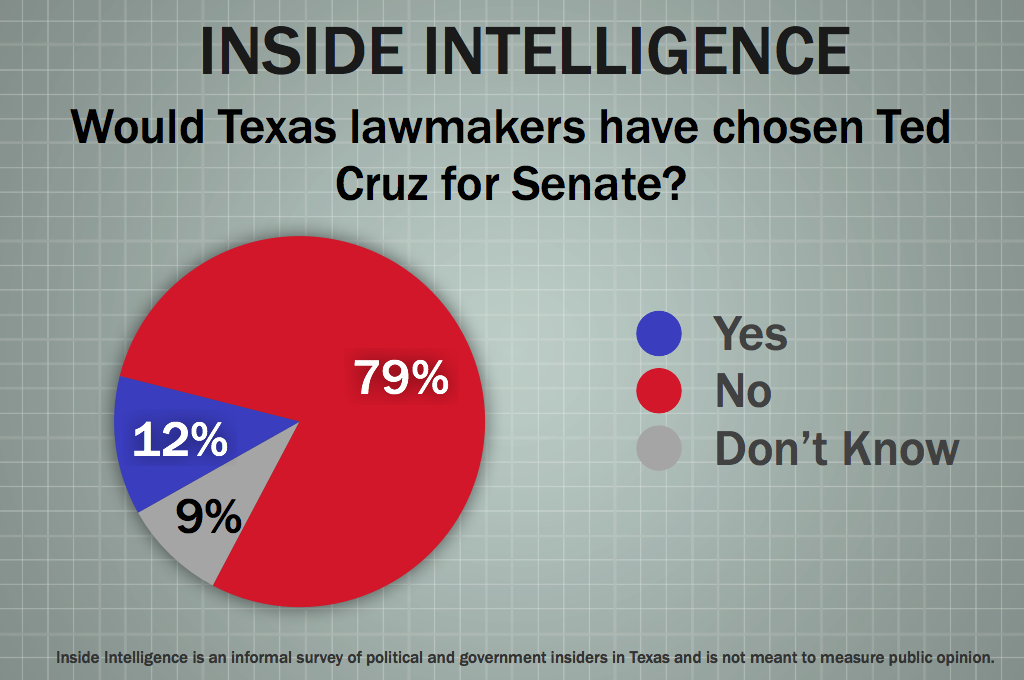 Would the Texas Legislature have chosen Ted Cruz for the Senate?

• "They definitely would have chosen Dewhurst, especially as so many of them were aspiring to his job!"

• "Interesting. Probably not. Not sure the Tea Party has that much sway. Pretty sure it would be a more moderate republican. Plus, the Senate might have pushed for Dewhurst (a) to appear supportive and (b) to promote one of their own to lead the Texas Senate"

• "All senators would probably be chosen from among the Legislature."

• "Never. That's why this amendment should not be repealed. Power to the people."

• "Cruz may be popular with the voting base of the GOP, but to fellow elected officials he is a scenery-chewing ham."

• "Insider game. Nominee would have been brokered" 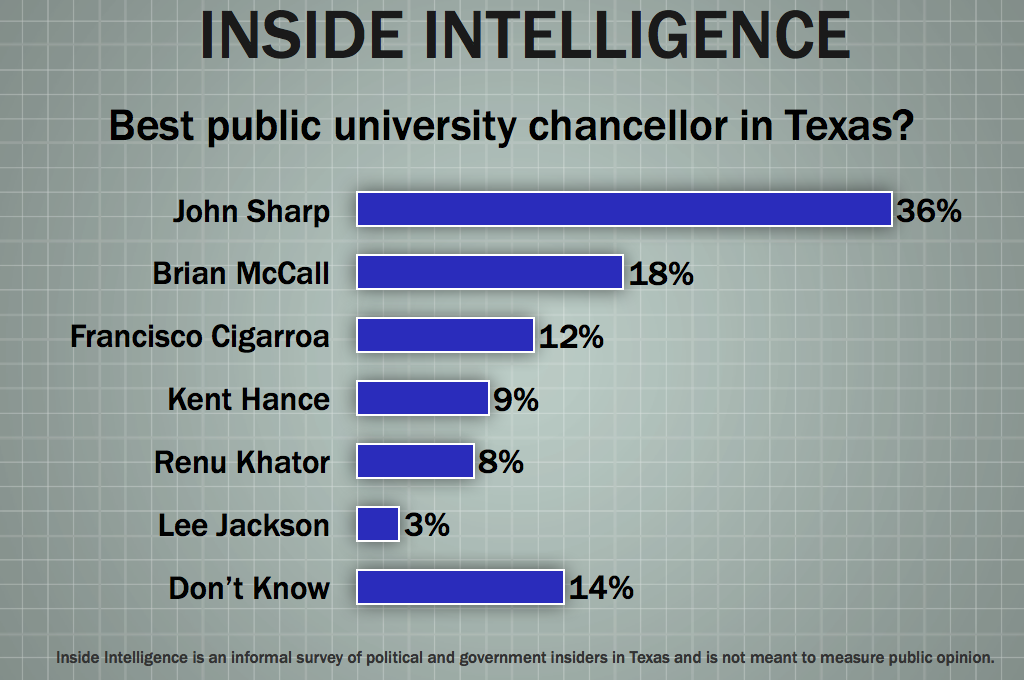 Who's the best current chancellor of a public university in Texas?

• "Cigarroa is very good, but Khator is an exceptionally gifted academic leader."

• "It depends on what you view as the job of a Chancellor. All have strengths. Some fundraising. Some problem solving. Some academic. But if you are asking who gets in front of a camera more, that goes to John Sharp."

• "Khator has put the University of Houston on the map. Her driven commitment to make the school a Tier 1 institution is amazing. She has raised unprecedented amounts of money, created new partnerships with business, particularly energy and is striving diligently to improve the athletic programs. I would put John Sharp at a close second."

• "McCall has worked nothing short of magic in San Marcos--but really, Texas is fortunate that right now we have great top administrators at all our public universities. Higher ed has had a rough time over the past decade, but I have high hopes for our future. You should ask who's the most awesome second-in-command next time...I bet Mr. Hamilton would come out on top."

• "Hance - hands down is the great communicator. No one makes each one of their students feel more personally invested, more inspired in their university than Kent Hance. I have to give John Sharp props for his artful skill but the best ROI in the state is Kent Hance. What he has done on the fundraising trail is simply unprecedented in Texas and will pay dividends for Tech for years to come."

• "The job at the top is always the hardest and Cigarroa has managed to delicately keep Perry's regents from turning UT-Austin into the nation's largest endowed community college while also keeping his own job."

• "Viewed from within the pink building, Sharp edges out Hance for first place. Not sure of the view from academia, but having seen her speak I am wondering if they wouldn't choose Renu Khator?" 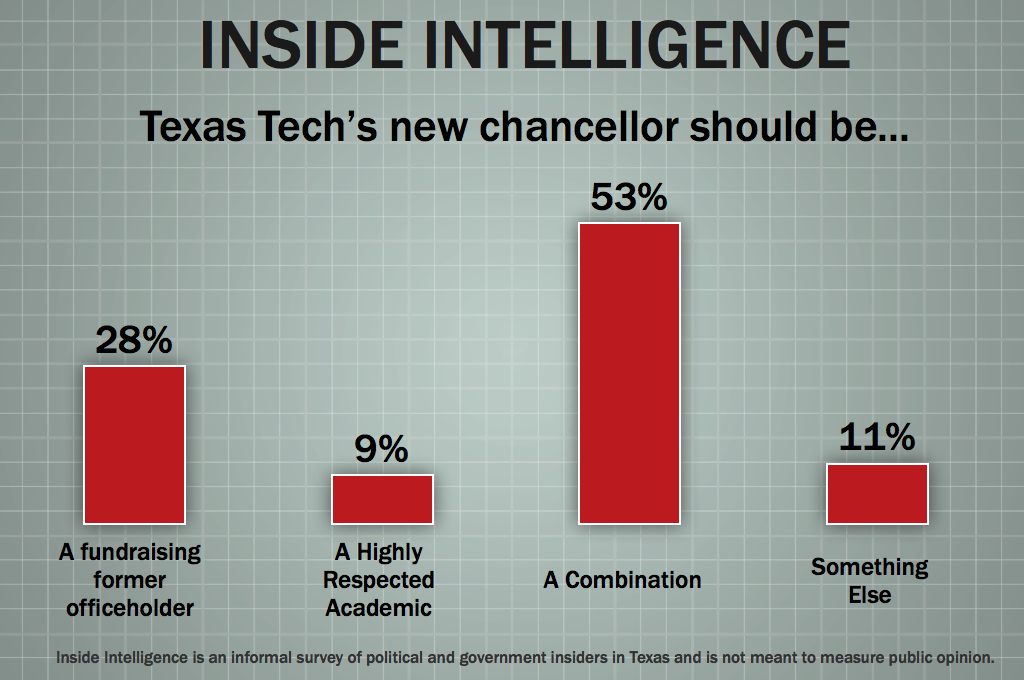 What should Texas Tech look for in its new chancellor now that Kent Hance is resigning — a highly respected academic administrator or a former officeholder with great fundraising skills?

• "Tech ought to look for someone capable of putting their system in the limelight. They have the ability to steal more kids that are leaving Texas to go to OU, OSU and Arkansas. Fundraising is important but a Brian McCall-type thinker and provocateur is what is needed for this system."

• "Being way out west, Tech is too often forgotten by the folks back east. They need someone who can bring back the bacon."

• "The idea of chancellor has changed from an academician to a fund raising, cheerleading former office holder. Pete Laney would be perfect for Tech but for his political party, so they may go with technocrat Duncan."

• "Hance got the dollars - the new person should build upon that but also flex some academic muscle."

• "Texas Tech must defy expectations and do the unexpected. Don't hire local, bring in an academic rock star."

• "Major university systems are now like big corporations and need a variety of talents and skills to run well. You're unlikely to find these skills in an academic."

• "Tech's greatest need is improving its academics. Hance did a good job with fundraising, but money will follow improved academic credibility."