With state Sen. Leticia Van de Putte, D-San Antonio, on the verge of an announcement about the lieutenant governor’s race, we asked the insiders in government and politics about how she might affect the chances of other Democrats on the ticket. Fifty-two percent said she’ll improve things for the rest of the ticket, 32 percent said she won’t, and 16 percent said her candidacy would have no effect on other Democrats running in 2014.

We collected comments along the way and a full set of those is attached. Some excerpts follow. 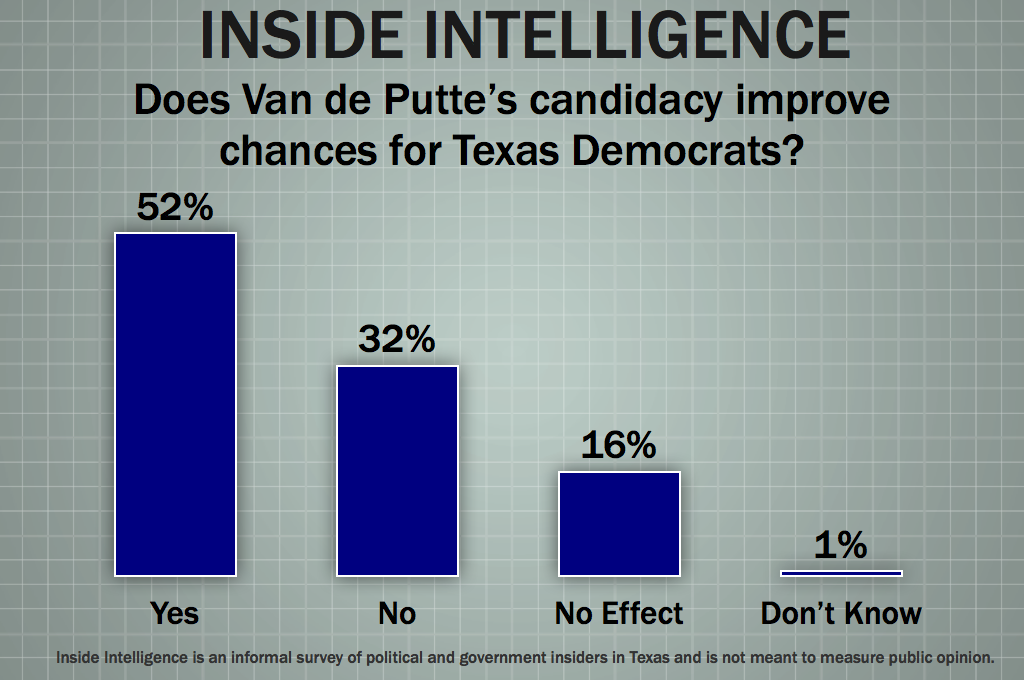 • "Having a recognizable Latino will bolster the vote and she might increase the turnout."

• "Absolutely. With Dan Patrick as the R nominee...10%-15% of Republican voters would vote for someone else; thus giving LVP a huge chance of winning."

• "I do not see how the Democrats would make any progress in statewide elections this time. But, Sen. Van de Putte drew a 4-year term and is probably the most legit candidate the Democrats have run for this office in a while. If you don't run you can't win."

• "The lite guv's race is a gift-wrapped opportunity and the only shot for a Democrat state wide victory. The republican candidates are racing towards the right-wing cliff and Senator Van de Putte will be riding the perfect wave towards a possible victory."

• "The Ds will lose by at least 10 points with her or without her." 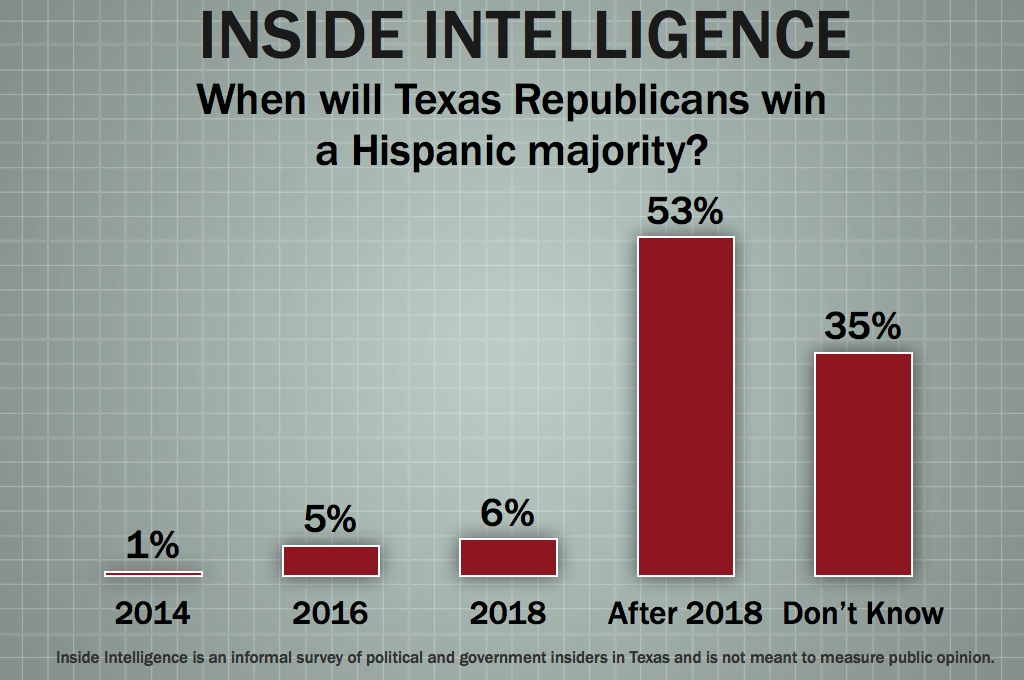 When do you think the Republican Party will win a majority of the Hispanic vote in Texas?

• "Another run to the right Republican Primary pushes that possibility further into the future."

• "Who ever said that was a goal of the GOP in Texas!? It certainly doesn't need to be to maintain majority party status in Texas."

• "There is an assumption that the R party will ever win a majority of the Hispanic vote in Texas. I'm not sure it'll happen in my lifetime."

• "Huh? Assuming George P. Bush runs for Governor in the future, I don't expect the Republican Party to win a majority of the vote. Even when or if he does, there's no guarantee he will pull that demographic entirely into the party. George P. facing a Mayor Castro would certainly split the sheets for Texas Hispanics."

• "I do not think the Republican Party will ever win a MAJORITY of the Hispanic vote.... I think it will make serious inroads by 2016 or later." 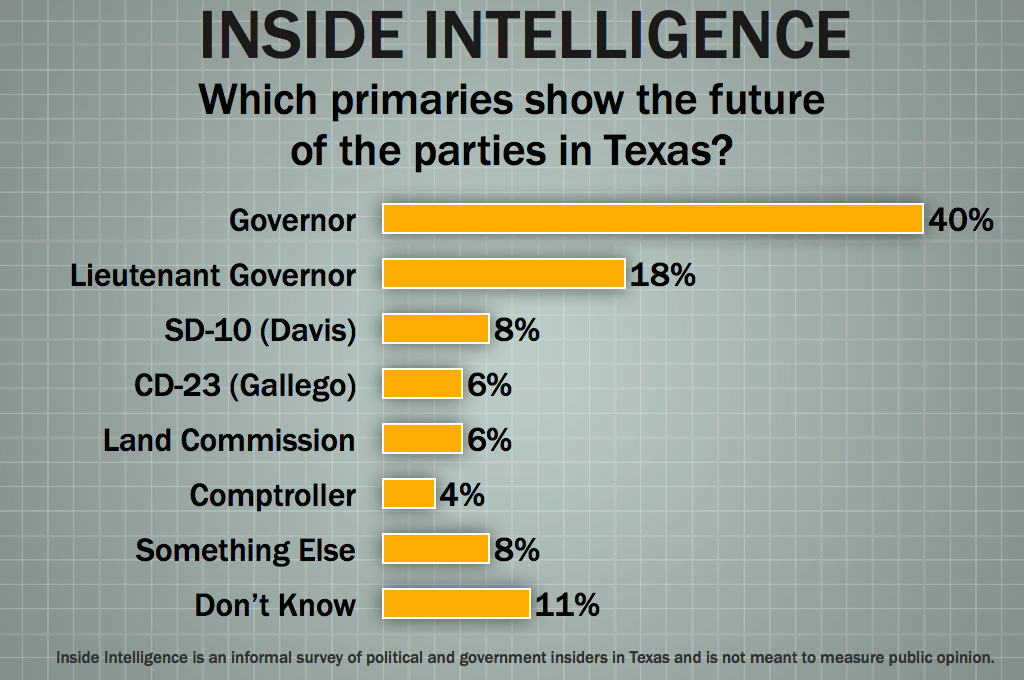 What races show the true future of the two parties in Texas?

• "Wendy Davis and the Battleground Texas crowd have brought the national Democrat platform to Texas politics. How will the voters respond?"

• "Lt. Governor. R party has infighting with a race to the right, which will result in extreme statements by the end of the runoff. And that race will likely be closer than the Governor's race next November, showing how extremism in the primary hurts in the general."

• "The race for governor will provide the best reading of where the two parties stand today. My guess is Davis loses by eight or nine, inside the Democratic margin of the last dozen years, but not close enough to truly threaten."

• "As a Reagan Republican, I am concerned at the rhetoric and just plain stupidity coming out of the Republican candidates for Lite Guv. They are trying to ultra-right-wing each other off the cliff. Their actions are making it very difficult to come back towards the middle. Democrats will make Patrick the face of the TX GOP."

• "The Supreme Court and Texas Court of Criminal Appeals races are the best indicators of any underlying electoral shift in Texas."

• "The 2014 election is going to mark the beginning of the Democratic recovery in Texas. The GOP will still sweep statewide, but the margin of victory will start to narrow -- and quicker than expected." 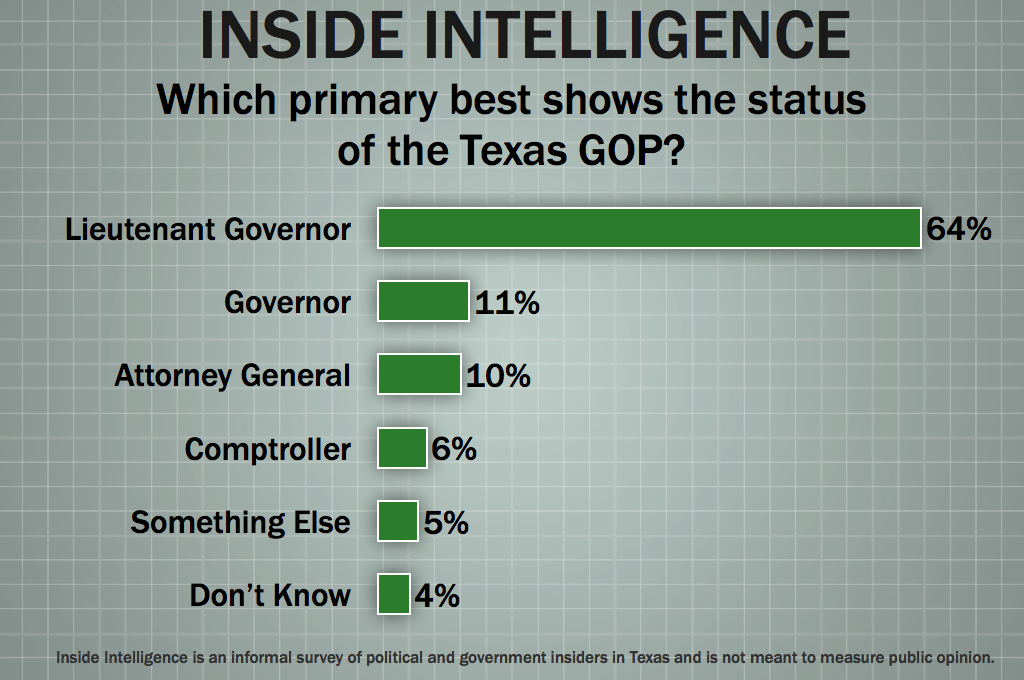 Which Republican primary race offers the best window into the Texas GOP's future?

• "The Lite Gov race has every flavor of Republican candidate that one could want: New Establishment, TEA Party, Individual Freedom, and a Perryista. The only thing missing is enough money to fund them all."

• "The Republicans are all over the immigration issue, which I think will be an albatross around their necks. I think the Republican nominee for Lt. Gov. facing Sen. Van de Putte will highlight how far behind the times the Republicans are and just how big of a mountain they will need to climb with a 'browning' Texas."

• "Lt. Gov. You have four current officeholders running as far right as they can. It's a recipe for long-term disaster for the Rs."

• "Lite Guv and AG's race each has multiple candidates that at the same time represent different factions of the party but also largely overlap. Will the Tea Party candidate win or the other more conservative Tea Party candidate win? How will the ''established'' candidates do--you know, the ones with experience in dealing with and finding solutions to problems? Bravo should do a show on political candidate makeovers and they could base it here in Texas. Steer Eye for the Voter or something like that. I've never seen so much reinventing and me-tooism."

• "Land Commissioner being George P. Bush. Well known, wealthy and Hispanic. The attorney General's race will be interesting with tea party versus moderate. This should give us insight on how strong the tea party is this cycle."

• "The only moderate on the ticket is Branch. If he wins, there's been a shift."