The University of Texas at Austin is the best public university in the state, according to 80 percent of our insiders in politics and government. A strong majority — 72 percent — think it will still be the top dog 10 years from now.

Texas A&M University, Texas Tech University and the University of Houston got some votes, but UT remains the school to beat.

That said, a majority of the insiders said the Battle Royale between the University of Texas regents and the administration at UT-Austin affects the quality of the school and judging by their comments, they don’t mean that in a good way.

We also asked whether top-rated athletics programs mean a lot to the success of public universities. More than a third said sports are very important, and another 51 percent rated them “somewhat important.”

As always, we collected comments from the insiders along the way, and a full set is attached. A sampling follows: 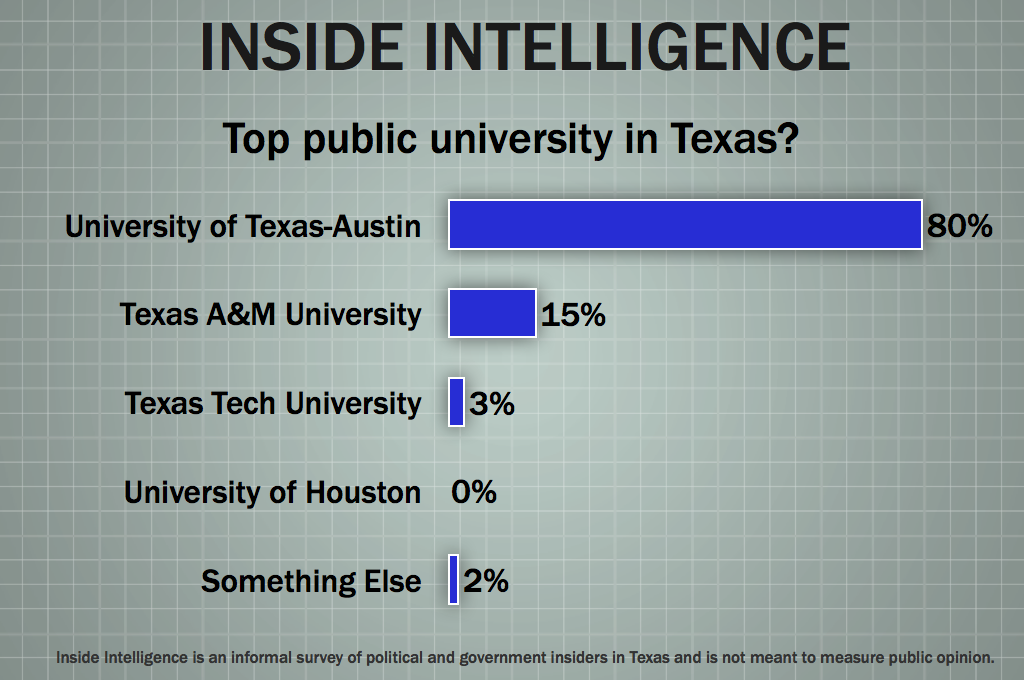 • "As a Longhorn it pains me to say that UT Austin currently still has the better brand, but A&M has been doing amazing things in recent years and it's not obvious which campus today has the most high quality programs."

• "While I earned both my undergraduate and graduate degrees from UT Austin in the 1970s, I believe Texas A&M University has surpassed UT in terms of academic excellence and the overall student experience."

• "UT is the top one. Assuming you still consider it public, what with the decrease in state funding and the pushback when public servants try to hold it accountable."

• "But don't forget - UT Austin is still only #52 among national universities; #16 among public universities (behind Berkeley, UCLA and four other California schools!)"

• "Picking Tech because someone had to make sure they got at least ONE vote. Guns up!"

• "As a transplant, the obsessive navel-gazing about UT and A&M amazes me. Texas has vast resources and could create multiple truly great universities. However, we have no vision and will not make the sacrifices necessary to create such a system." 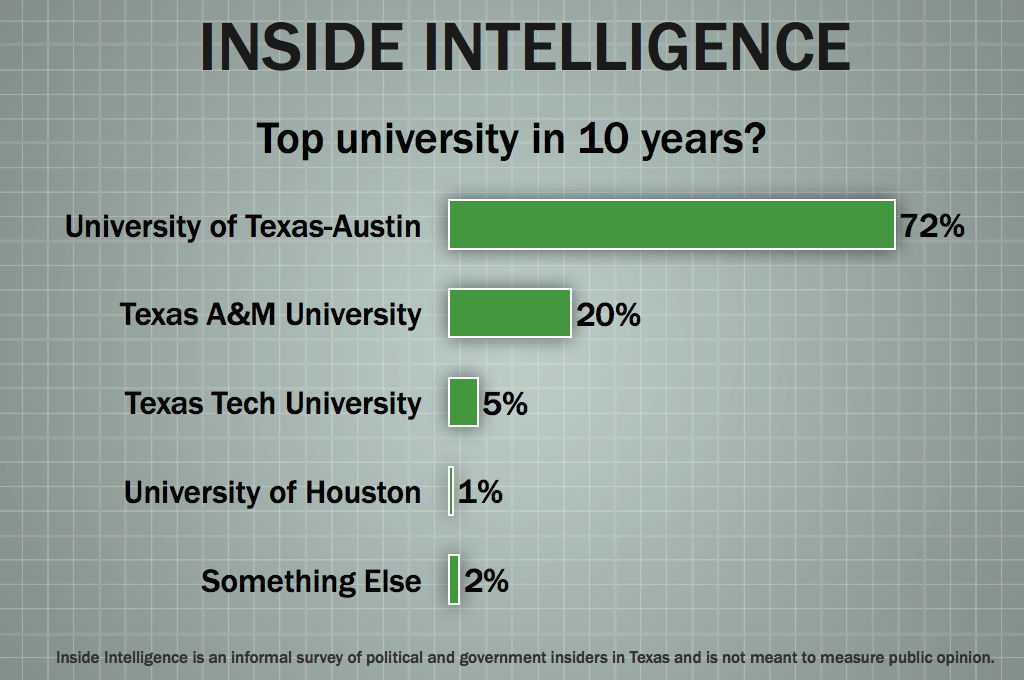 What do you think will be the top public university in the state ten years from now?

• "Assuming that Texas citizens can purge the bad actors from the UT Regents, UT Austin will be able to make good use of its natural advantages and respond vigorously to the pace being set by the Aggies."

• "In 25 years, the top university will be 'something' else, with public universities unable to compete with private."

• "UT will always be better than A&M. Sorry Aggies. I assume someone was making a funny when they included Tech and U of H on this list."

• "The sleeping giant in this case is U of H. The University of Houston will continue to rise as long as Houston continues to be the energy capital of the world, and the US continues to strive for energy independence."

• "Hopefully, in ten years, we will have begun the process of dismantling all the state's over-priced but low-performing universities and be moving toward post high school education sources that better meet the needs of students, communities and the job market. These universities are dinosaurs.”

• "If you're located in College Station, that's a deal breaker on being the top university. Otherwise the Aggies are doing everything right and UT could learn quite a bit by following John Sharp's example of leadership and management." 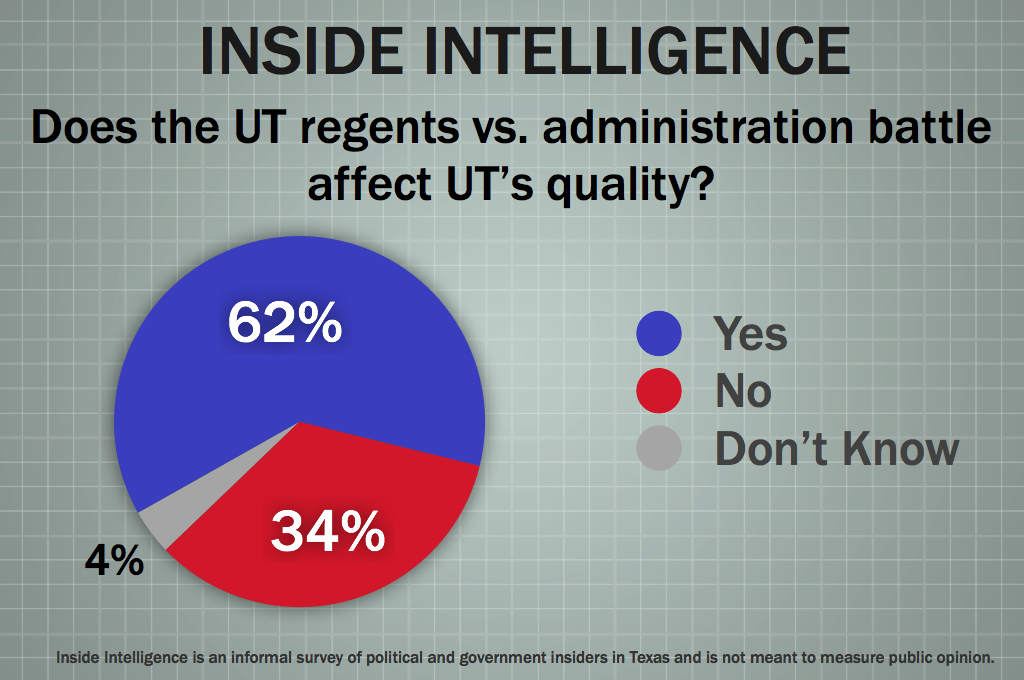 Do you think the tension between UT’s regents and UT-Austin’s administration has any effect on the quality of the school?

• "Does the tension between the Tea Party and the Business Republicans effect the quality of the Republican Party? Turds in the punch bowl always play a part in quality."

• "Hard to keep good professors and top admin if there is this much fighting."

• "It is impossible for the friction not to impact faculty recruiting."

• "BUT it's not a one way street as many in the media think. UT is not as efficient or as excellent as it thinks it is. A little more hunger, knowing it needs to stretch to a higher bar wouldn't hurt. The regents aren't all wrong here."

• "The political atmosphere at UT has forced the alumni to take sides. Professors are more concerned about keeping their jobs instead of teaching. Political wars at higher learning institutions always end up hurting the student body and the reputation of the university."

• "Tough to know now whether it will effect quality; however, the headlines and committee hearings certainly won't help in recruiting the most talented professors and researchers."

• "Anytime they are feuding inside, means they are not working together to make UT great." 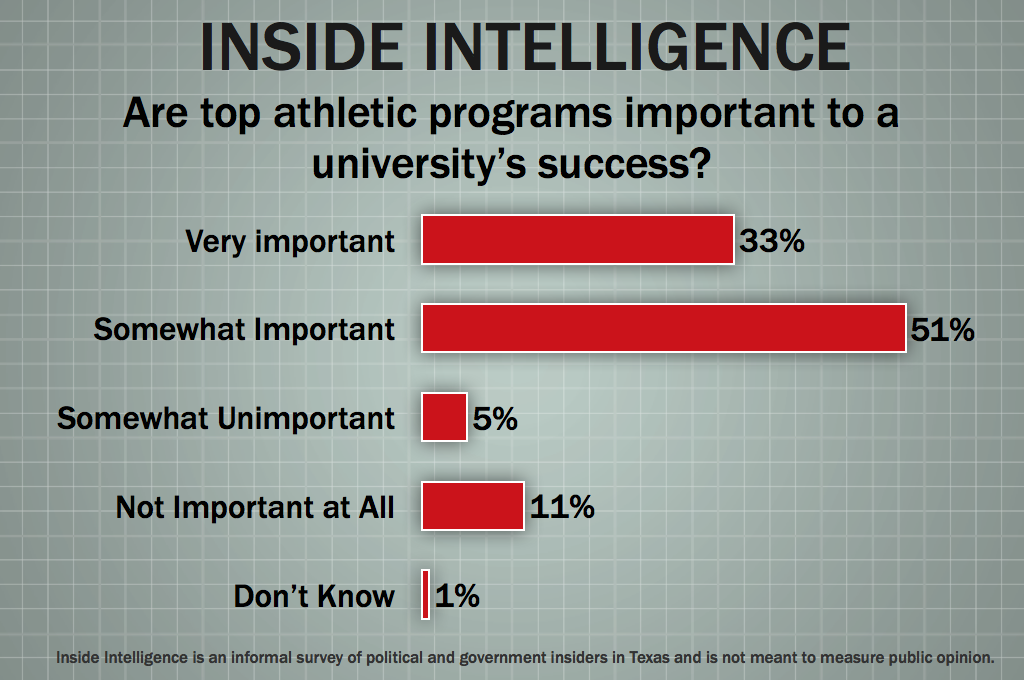 How important are top-rated athletic programs to the success of public universities?

• "You cannot dismiss the impact of athletics on a college campus. Is it the most important thing? No. But it does play a role I the overall campus demographics and environment."

• "Nothing brings more positive attention to school than a good athletic program."

• "The athletic programs help give the schools national attention, which is a good thing. And for UT, they also provide money to the school, which is also a good thing. For those schools that can't break even on athletics or don't field winning teams...sorry guys."

• "Duke, Gonzaga and others have benefited from the publicity around their basketball teams. But a public university has a captive pool of applicants, so should limit the priority given big-dollar athletics."

• "Given the diminishing amount of state funding for state universities, private fundraising is key to maintaining the quality of public universities. A top rated athletic program enhances fundraising."