The state’s new laws regulating abortion and women’s health facilities will remain an issue throughout the 2014 elections, according to nearly unanimous insiders in politics and government who answered this week’s Inside Intelligence survey.

And generally, 48 percent think the issue works to the political benefit of Texas Democrats, while only 19 percent said Republican candidates will get the biggest boost.

Should women’s health clinics close under more stringent requirements for facilities that provide abortions, voters are more likely to move toward the Democrats than the Republicans, according to the insiders; 50 percent chose Democrats on that question, while 9 percent said Republican candidates would benefit.

How about fundraising? Insiders had the same answer, with 75 percent saying Democrats will get the bigger fundraising boost from discussion of the issue as the election cycle progresses.

We collected comments along the way and a full set of those is attached. Here is a sampling: 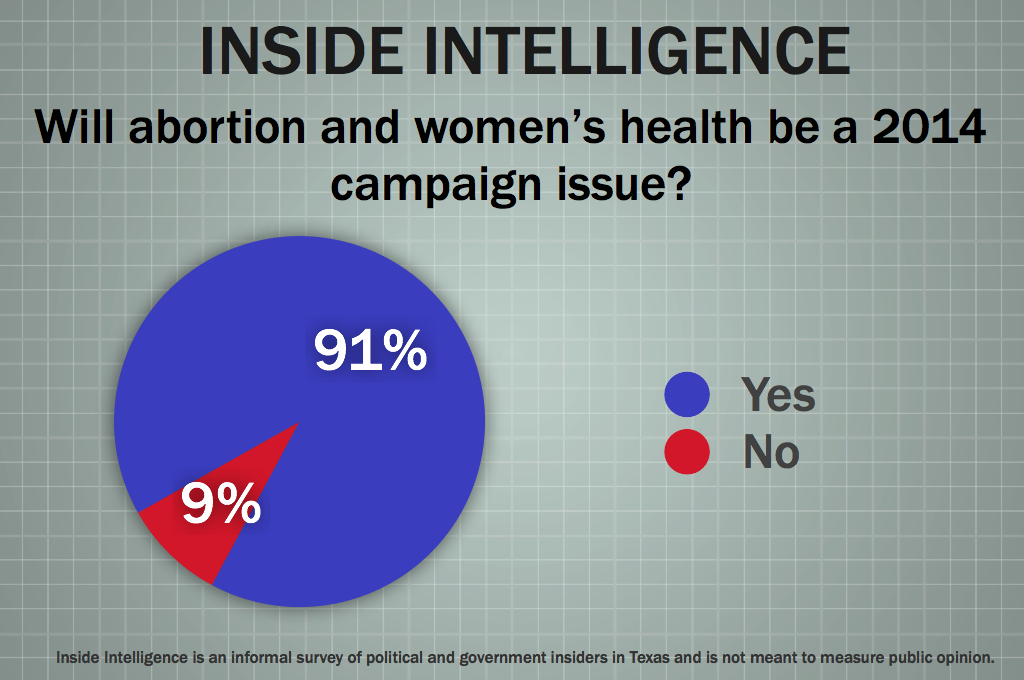 Will the state’s new laws regulating abortion and women’s health centers be an issue in the 2014 elections?

• "Regardless of whether SCOTUS takes up the case, both sides will use it to their advantage (to raise money and GOTV)."

• "Wendy Davis got the exposure she wanted and clearly hopes to move beyond this issue. However, the R's will make every effort to saddle her with it."

• "But not in the way conventional wisdom expects. Democrats will talk about women's health and GOP candidates about late term abortion bans. Both positions represent majority opinion in Texas."

• "Yes, to Wendy Davis' misfortune. Democrats need to 'turn-on' people to restore their political fortunes, but they will be turning-off voters with a pro-abortion message."

• "It should be. When you hear a report that a woman was 'disappointed' that the clinic she wanted to go to for an abortion is closed and she says in a negative tone, 'oh no I guess I have to have the baby' really? These types of stories need to be highlighted by pro-life groups to show that the law is actually working." 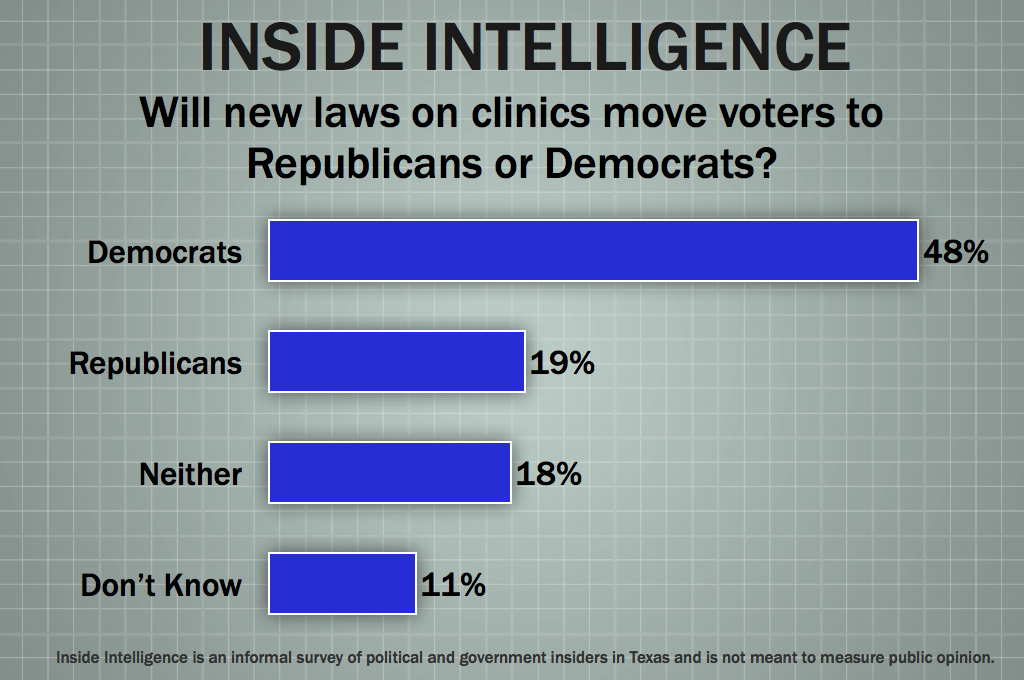 As a matter of politics, do the new laws help Democratic candidates or Republican candidates?

• "It's helps both. Repubs: see, we're trying to protect the sanctity of life. Dems: see, they hate women!"

• "It helps both. It will drive the base of both parties out. Which helps Republicans since their base is bigger."

• "In theory, there are many suburban women who usually vote Republican but who might be tempted to cross over. I'll believe it when I see it."

• "The Republican anti-abortion base voter has been given new, more restrictive laws just about every session to keep them motivated. They'll still show up on Election Day, but this time they'll be outnumbered. ."

• "Hell hath no fury like a few million women scorned. The selective hypocrisy of R extremists has literally handed Ds the moment they need to rebuild and maybe (just maybe) win."

• "Keeps Wendy Davis identified solely with abortion, rather than broadening her image." 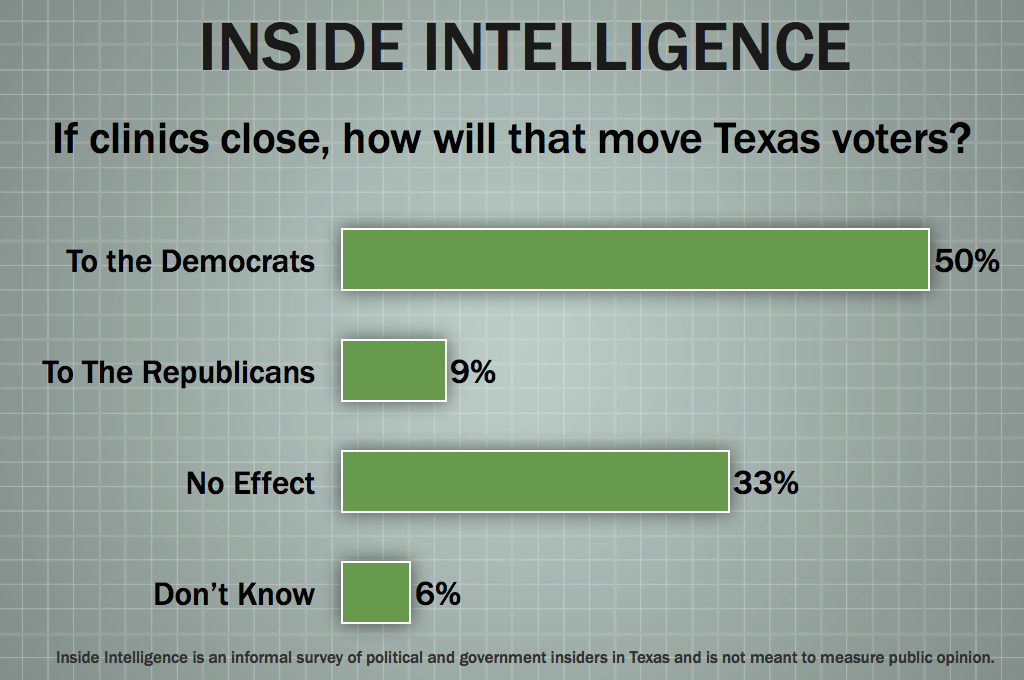 If some clinics close, how will that move Texas voters?

• "There are successful women on the very edge of income-earning levels that rely on these services daily because they are limited in choices or they are contract employees with no coverage."

• "Abortions are sought by young women - a demographic with low registration and even lower turnout rates. Their impact in elections is negligible."

• "Depends on how many. My bet is few will close. The providers make a lot of money, and they'll find ways to get sympathetic docs to serve. Their profits will go down a bit, but most centers will be open for business."

• "This topic has been around so long everyone that cares about this issue has picked a team."

• "Pro-choice voters will move Democrat, pro-life will move Republican, and the rest of us, who aren't single issue voters, will not be affected. By the way, those voters it 'moves' are already in their respective columns." 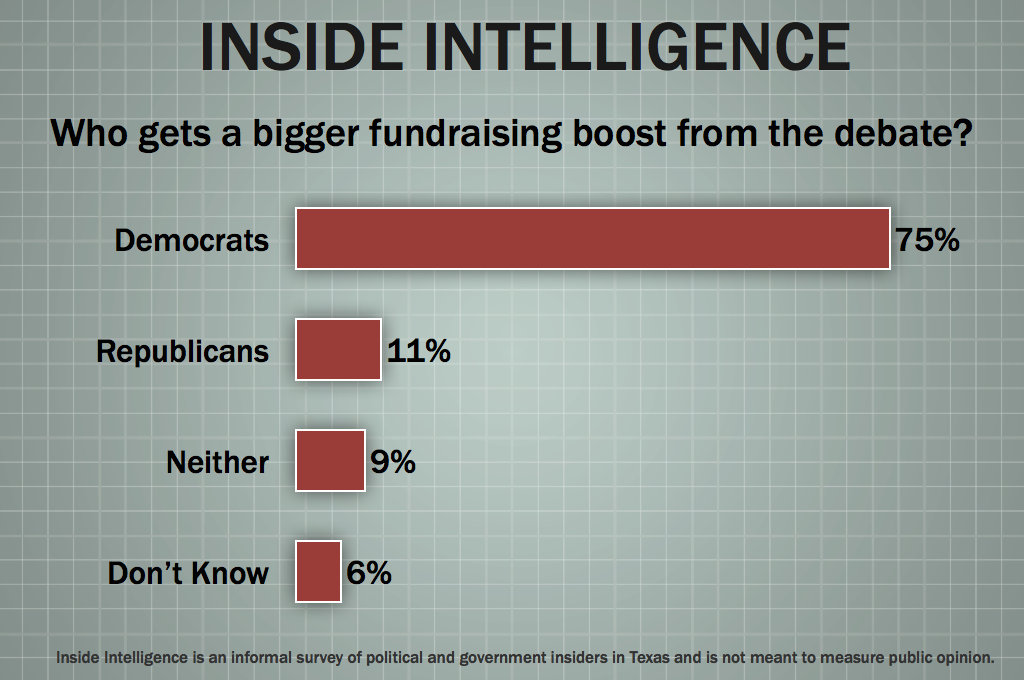 Who gets a bigger fundraising boost from the debate over abortion and women’s health?

• "Republicans get something better than money; committed primary voters!"

• "The issue of abortion restrictions has long been a pet issue for the Hollywood liberals. It will undoubtedly encourage them to write a check to help mask their degenerate lifestyle."

• "Democrats get the benefit of cash from outside the state in hopes of turning the state blue. Not enough green to turn Texas blue."

• "Passion often translates into increased fund-raising and pro-choice Democrats are nothing if not passionate about the issue. (See the Wendy Davis phenomenon already well documented). But the money will ultimately not matter if they can't use it to broaden their ideological appeal. Abortion is not a particularly attractive issue on which to build a campaign for office."

• "Wendy and the Ds will bring in more out-of-state money ... which will promptly be wasted on a loss."

• "For the first election in a generation Texas will IMPORT campaign money. Thank you, HB2! Thank you, Ted Cruz!"