We also asked about immigration this week. Four out of five insiders would support comprehensive federal immigration reform that would provide a pathway to citizenship for most undocumented immigrants currently in the U.S.

They also strongly support the idea of granting citizenship to children brought illegally into the U.S. if they do certain things, like enlisting as soldiers (75 percent), going to college (56 percent), working as firefighters (48 percent), working in disaster relief (44 percent) or working as childcare providers (38 percent). When combined with those who “somewhat support” the idea, each of the proposals had a clear majority.

As always, we collected comments along the way and a full set of those is attached. Here’s a sampling: 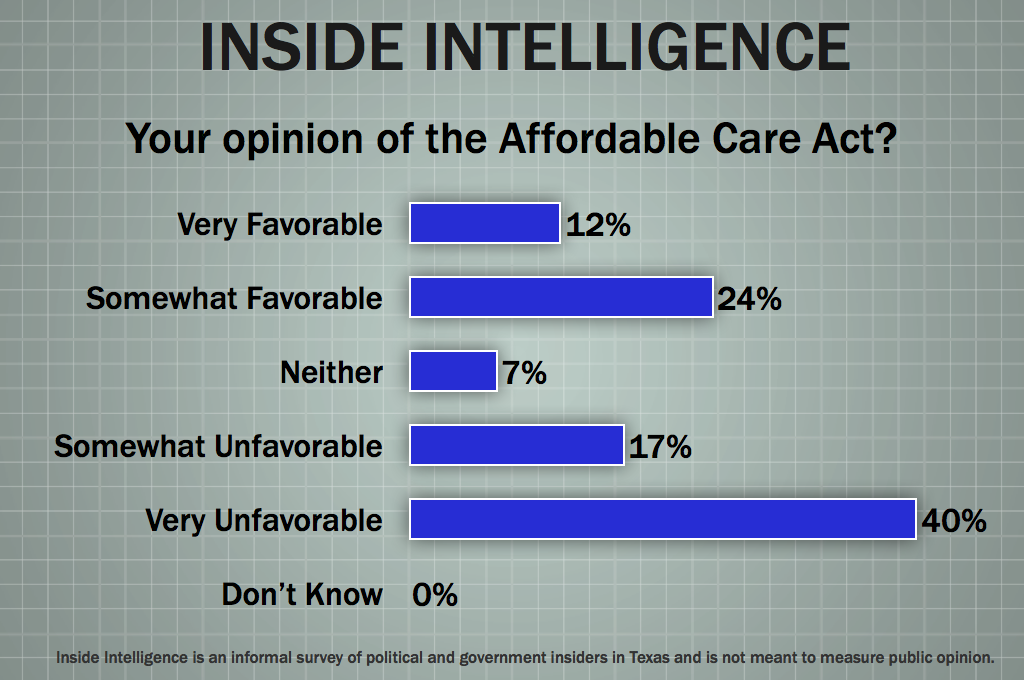 • "Certain reforms need to happen: 1) eliminating life-time caps; 2) eliminating pre-existing condition exclusions; and 3) providing access to health care to those who truly cannot afford it. We did not need the albatross that is Obamacare to accomplish these reforms."

• "Much better would be a single payer system. As long as it's hybrid with the evil insurance companies, there will be problems."

• "The web site problems are minor compared to the problems this law will create."

• "Since I am one of the lucky ones with a great, employer-based health care plan, I am strongly in favor of others having the same sense of security and protection from financial ruin if they get sick. Is this way perfect? No. Do I trust Congress to pass another bill to replace it if repealed? No."

• "It has good pieces, but it's obviously overall a disaster that probably will just get worse over time until it's dismantled. The interesting issue is whether we'll go back to a modest, less ambitious policy that simply fills holes in the current system, or a more radical single payer system. It would take a D sweep to do the latter. I predict the former." 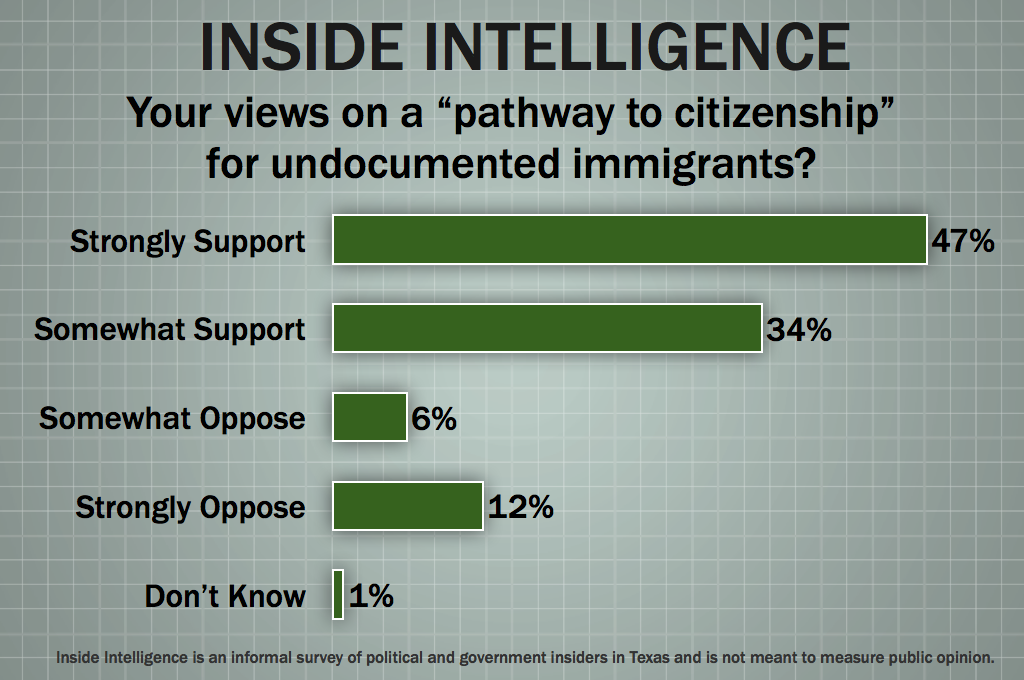 Do you support or oppose passing a comprehensive immigration overhaul at the federal level that would provide a pathway to citizenship for most illegal immigrants currently living in the United States?

• "If by 'comprehensive' you mean a plan that includes a sensible guest worker program AND truly secures our border, then yes. Otherwise, this was tried in the 80s and it failed."

• "Last I checked - that was the American way and how we have come to be the country we are today. A lot of Mexicans died outside of the walls of the Alamo, but let's not forget the ones that died inside as well. This whole attitude of pulling up the ladder once we have climbed on top ourselves only lowers us all."

• "Comprehensive immigration reform would have to mean meeting somewhere in the middle. Unfortunately, the two sides of the issue have no sense of middle. Can't let everyone in. Can't keep everyone out."

• "No citizenship. Allow for a guest worker program."

• "Federal law already provides a pathway for illegal immigrants, namely they return to their countries and queue up like their fellow countrymen and go through the legal process."

• "Illegal=against the law. I'm quite moderate, but I think that maybe we should enforce our laws." 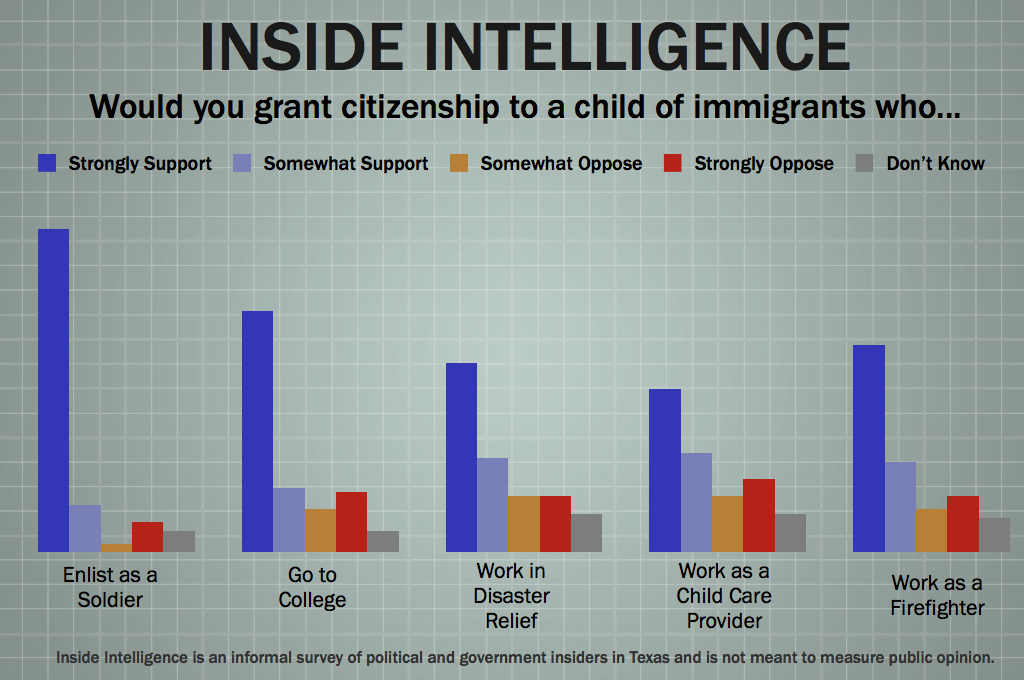 Do you support or oppose granting citizenship to persons brought here illegally as children if they...

• "If an individual is willing to put their life on the line in uniform in service to our country, an offer of citizenship should come with that. Otherwise, which occupations or endeavors result in citizenship should be part of a sensible visa program that makes our country stronger intellectually and economically."

• "We do not punish children for the sins of their fathers."

• "We best not devolve into the Roman model of mercenary armies, but as a path to earned citizenship the idea has merit."

• "The only answer that gives me great pause is 'work as a child care provider.' Seems like affluent people are willing to look the other way for their own personal nannies but not for others brought here illegally who go on to pursue college, professional careers or public service."

• "I wouldn't discriminate on the basis of the work the person does. There ought to be a fair process that applies equally to all." 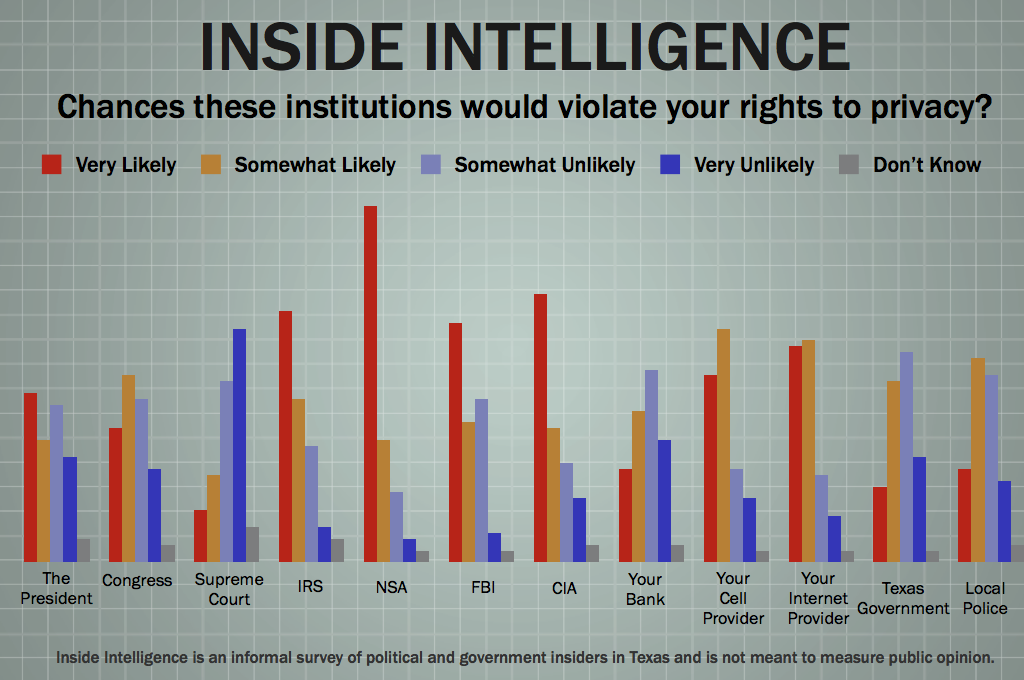 • "Its not paranoia if they are really after you."

• "We wouldn't know if it weren't for the whistle blowers."

• "Well as you can tell by my responses I think 'privacy' is a quaint little thought from the past!"

• "If the State (generic term) has a legitimate need to examine my phone or email records, and keeps the results of that examination confidential, I don't consider that to be a violation. I'd rather have my Gmail scanned by some federal functionary than allow another 911 event in an American city."

• "Seriously? This is a question?"