With U.S. Sen. Ted Cruz on a post-shutdown tour of the state, we asked the insiders about his standing with voters, specifically how his politics compare to theirs.

To begin with, 60 percent of the insiders believe Cruz is more popular with Texas Republicans than he was before the federal government shutdown.

What about Republican candidates in Texas — will they shun him or embrace him? They’ll embrace him, according to 68 percent of the insiders.

The insiders had a lot to say about Republican politics and the junior senator from Texas, and we have collected all of their comments in the attached document. Here is a sampling: 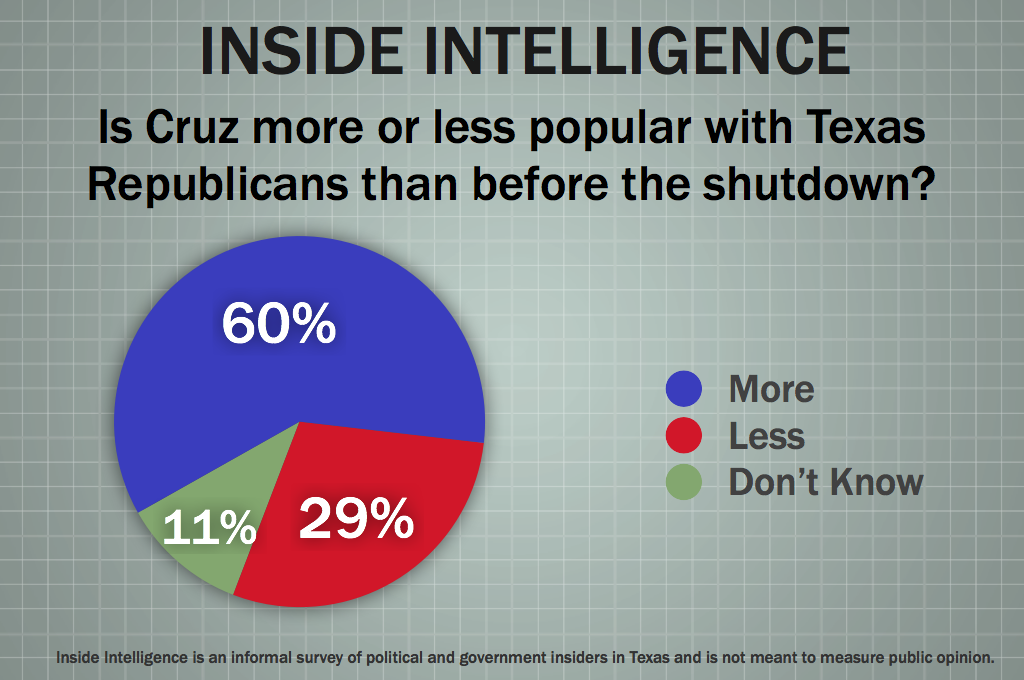 Is Ted Cruz more or less popular with Texas Republicans now than he was before the federal government shutdown?

• "I think it depends on which group of Republicans to which you refer. The hacked off far right, he is more popular. For the more moderate and mainstream Republicans, less popular."

• "From personal observation there are some county club Republicans who are uneasy with the intensity of Cruz's approach, but the great majority of R primary voters are very happy with Cruz. Want proof? There are currently 21 statewide Republican candidates running for 7 executive offices. Name one of those 21 who is publicly distancing him or herself from Ted Cruz."

• "He's doing exactly as he said before elected." 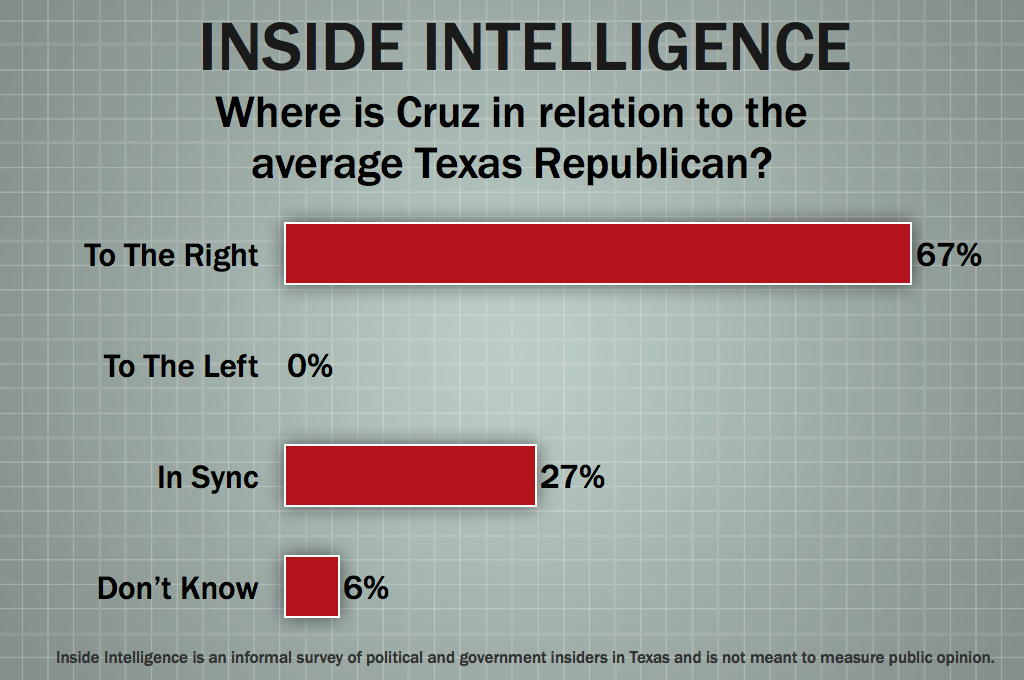 Is Ted Cruz ideologically to the right, to the left, or in sync with the typical Texas Republican voter right now?

• "I don't think there is a typical Republican voter right now."

• "Objection. Assumes facts not in evidence: 'The Typical Texas Republican'."

• "He is in sync with primary voters. General election Republicans are starting to think he is the uncle you don't take out in public."

• "Depends on what part of Texas you're talking about. In Dallas and Houston, Cruz is further right. In many parts of West and East Texas, Cruz is just another Republican."

• "He's in sync with typical Texas Republican values and principles, but his brash style offends many of us."

• "Sadly, evidence suggests that he falls within the mainstream of an extreme party." 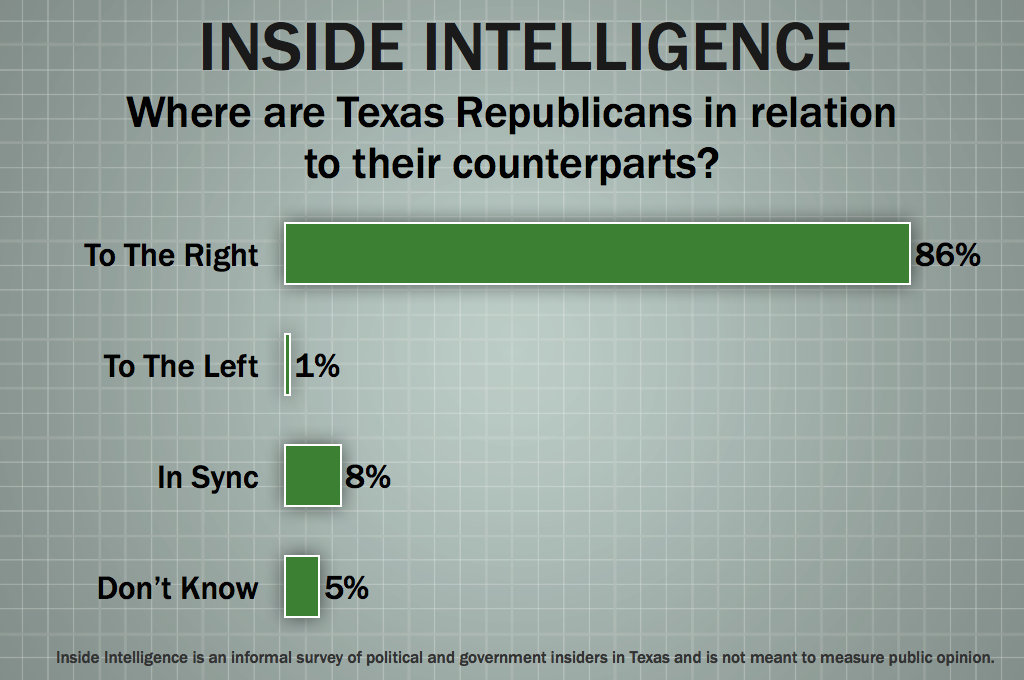 Are Texas Republicans ideologically to the right, to the left, or in sync with their counterparts in the rest of the country right now?

• "To the right and Texas is better for it. Take a look at the prosperity we enjoy in this state while the rest of the country is still rebuilding or in recession."

• "We are in sync with those who believe like us. Everyone else lacks purity."

• "Chris Christie may be the Republican nominee for president, but is there any question how he would fare in our corner of the country?"

• "The typical Texas Republican is in sync with those across the country but the extremes are more vocal and demand attention. The rest of the GOP voters should get moving..." 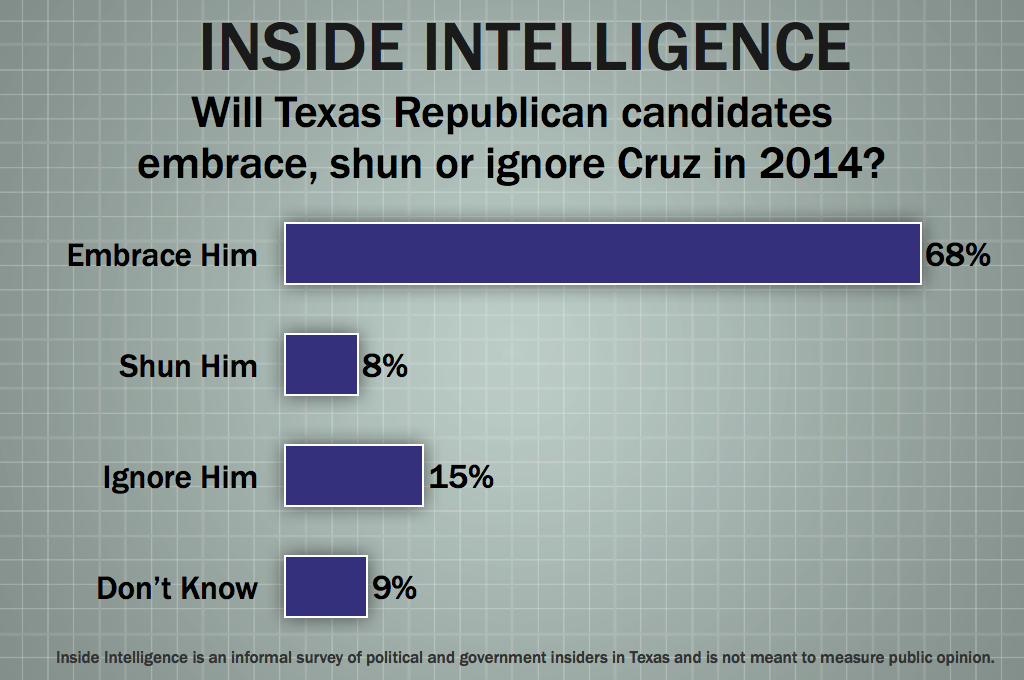 Will Republican candidates in Texas embrace or shun Cruz’s ideology and style in the 2014 cycle?

• "All of them will embrace it in the primary - some may drop off a bit for the general - but Cruz will be in demand."

• "The evidence thus far is that the majority of Republican candidates for statewide office are embracing Cruz's far-right ideology and style. Some, like Branch, who has had a fairly moderate reputation in the House of Representatives, have chosen to embrace the Cruz ideology and Cruz himself. Ditto for Abbott and Cornyn."

• "That's what it will take to win a Republican primary. It's a toss up with the general election."

• "Cruz's efforts will inspire a whole new wave of Tea Party candidates, volunteers and donors. The liberal fantasy (offered by Obama, Schumer, and others) that the fiscal conservative 'fever' is going to break any moment now is deeply out of touch with the lives and beliefs of millions of working Americans, and especially out of touch with a very large number of Texas voters."

• "Smitherman will FIGHT, FIGHT, FIGHT for us...so will Paxton. And Dan Patrick. And Staples. And Patterson. And Abbott. And Toth. And Creighton. And Opiela. They're all reading from the Cruz play book and embracing his style and brash rhetoric."

• "By and large, Republican candidates will run their own races."

• "I don't think that the hand wringing and protestations about how Cruz has acted is justified. Regardless of whether I agree with him, he's doing exactly what he said he would do: not be part of the establishment in DC and play their game. At least he is doing walking the talk, which is more than most of the people complaining can say. I think the jury is out on Cruz and he may come out of this a whole lot more influentially than most think."