Finally, we asked whether student athletes should continue to offered college scholarships if they were also allowed to be paid for playing. Slightly more than half of our insiders said they should be.

We collected comments along the way and have attached a full set. Here’s a sampling of what the insiders said: 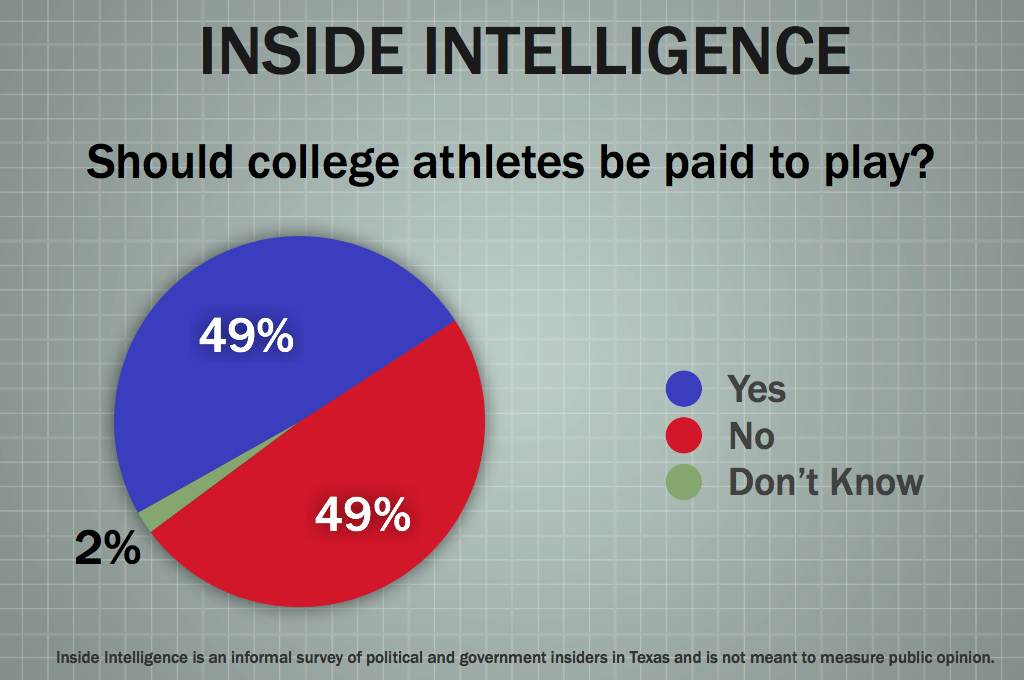 Should college athletes be paid to play?

• "Why pretend any longer that college sports are for student athletes. It is professional."

• "You mean in addition to free tuition, room, board, trainers, tutors, and athletic clothing?"

• "They are being paid with full-ride scholarships and amenities that the typical college student can only dream about. And they're receiving an education that will serve them long after their knees won't."

• "College sports should remain amateur and unpaid -- to paraphrase the Little Prince, what the NCAA says they are, they should be really -- a program that allows kids to participate in sports while pursuing an academic degree."

• "They make the School tons of money."

• "I would feel a lot more justified in booing teenagers if I knew they were at least drawing a paycheck."

• "College is about education, not sports."

• "The NCAA and its universities have created a modern form of slavery and no one is outraged by it. The student athlete sacrifices his body; gets to live with long-term health issues; and as a whole make billions of dollars for a select group of men and institutions. And what do they get? Nada! There is something morally wrong with this picture."

• "They basically are getting paid, anybody priced Baylor lately?"

• "A really big business where everyone does very well except the people actually doing the work." 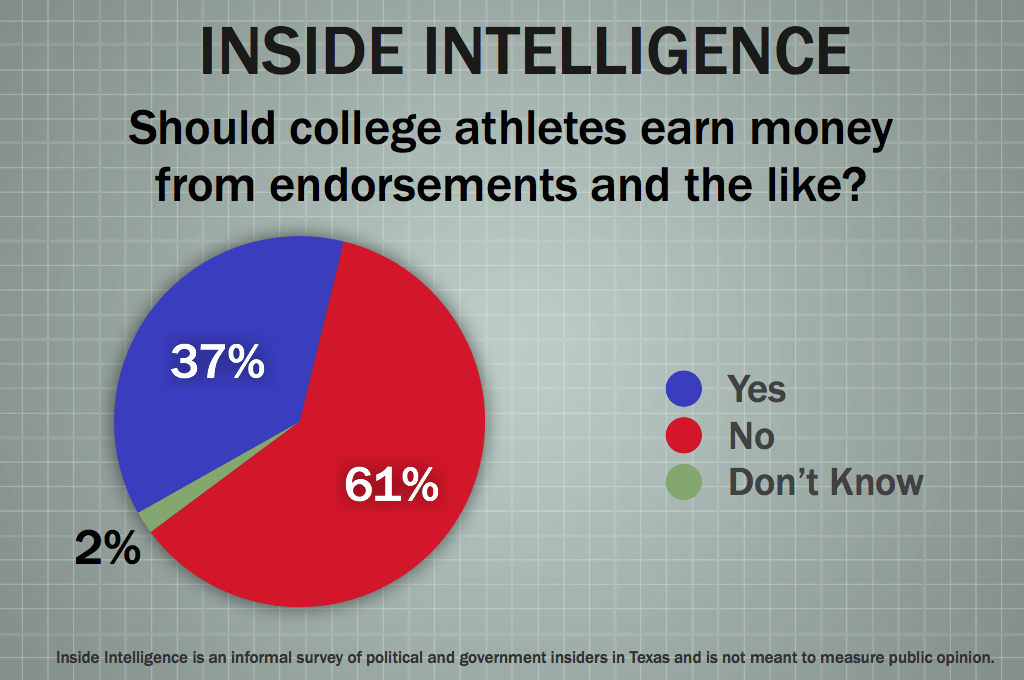 Should college players be allowed to earn outside income from endorsements, selling signatures, and the like?

• "I think they should but if they are on scholarship then whatever they earn should supplant scholarship money."

• "Yes. Split with universities for as long as student athlete wears the uniform. Put in escrow for use when degree is obtained."

• "But they should have to split it with the university and the NCAA and the broadcast carriers who give them the brand and the opportunity and platform to make money."

• "As long as controls are in place to ensure outcomes are not being paid for, then there is no reason to get in the way of this."

• "No. If a kid wants to become a professional, he should go pro."

• "Yes. If someone wants to pay you for your signature on a jersey, go for it!"

• "YES! The question should be: Why shouldn't players be allowed to earn outside income from endorsements, etc."

• "Really? Please. These young men and women need to be grateful for the opportunity they are given as an athlete. Should professional athletes start getting a share of the TV revenue that their leagues get and a cut of the profit the team owners get? Not!" 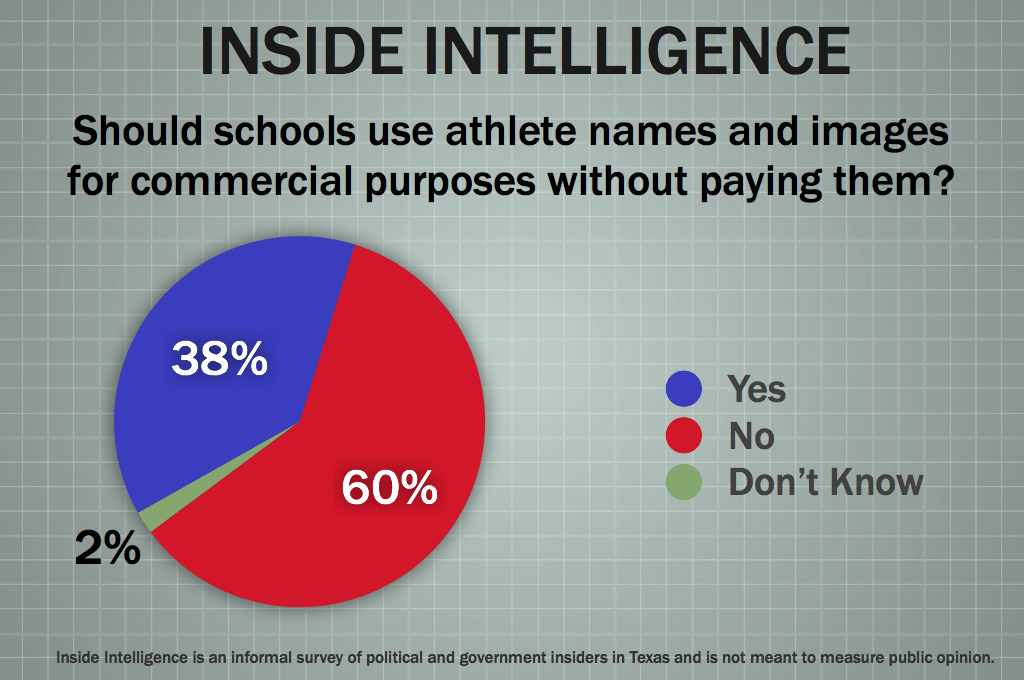 Should colleges — public or private — be allowed to use players names and faces in their own advertising and product deals without compensating the players?

• "Players should not be treated as a commodity but as a partner in generating profit for the school."

• "Will the colleges let me sell items with their brand without compensation? Ok then."

• "Of course they should. These athletes are getting plenty in return for their playing time."

• "No, but that doesn't mean the players should be compensated. Amateur is amateur."

• "Again, players have been treated as personal property by these institutions. Use them, abuse them, make as much money as possible from them, and then dispose of them for the next great thing."

• "This is not about the individual. Whatever happened to Big Team Little Me? Perhaps this is a reflection of our self-centered culture."

• "Yes, because the players ARE being compensated--they get to graduate debt-free. How many college students can say that?"

• "That's the deal. Even if they're not paid (and I think they should be), colleges use sports for fundraising, and nothing brings in the money like an All-American." 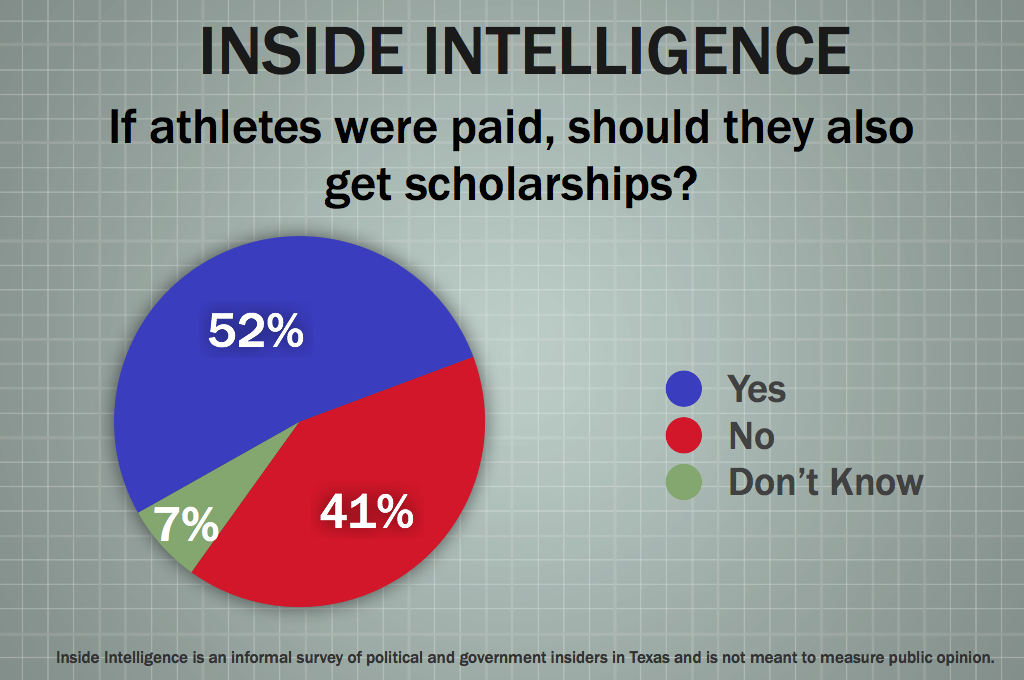 If student-athletes were paid, should they also be offered scholarships in addition to that pay?

• "The scholarships are the pay. Other students in more valued fields do not receive pay for significant work, like research related studies"

• "The schools make a lot of money off of their participation and work."

• "Most students are offered scholarships in some form or fashion. But, only a few students generate revenue. When the math club starts selling out stadiums, pay them on top of their scholarships too."

• "Non-student athletes are given scholarships and fellowship stipends regularly... bet you didn't even know that... why should a student-athlete be treated differently."

• "How about a guaranteed four-year scholarship, so that the kid can at least get an education - even if they tear an ACL."

• "Someone on a scholarship can also be on work study. Why shouldn't athletes?"