This week, we asked our insiders who they think the early front-runners are to win the primaries in 2014's big-ticket statewide races. The shocker: In the race for lieutenant governor, the incumbent ranked last.

There were no surprises in two of the top contests. In the Republican primary for U.S. Senate, 88 percent said they expected incumbent Sen. John Cornyn to keep his seat. A mere 10 percent said they would pick U.S. Rep. Louie Gohmert, R-Tyler, to oust Cornyn.

Our insiders were much less decisive about the races for lieutenant governor and attorney general, fields that are chock-a-block with Republican candidates. In the race to lead the Texas Senate, Lt. Gov. David Dewhurst, the incumbent, came in dead last, with just 11 percent of the vote. Current Agriculture Commissioner Todd Staples, a former state senator, was the top pick at 27 percent. More than 25 percent said state Sen. Dan Patrick, R-Houston, would take the dais, while nearly 20 percent picked Texas Land Commissioner Jerry Patterson.

In the race to replace Abbott, state Rep. Dan Branch, R-Dallas, came out on top with nearly 40 percent of the vote. Nearly 28 percent chose state Sen. Ken Paxton, R-McKinney, as the winner, and less than 18 percent picked Railroad Commissioner Barry Smitherman as the victor.

Who do you think would win the Republican primary for U.S. Senate? 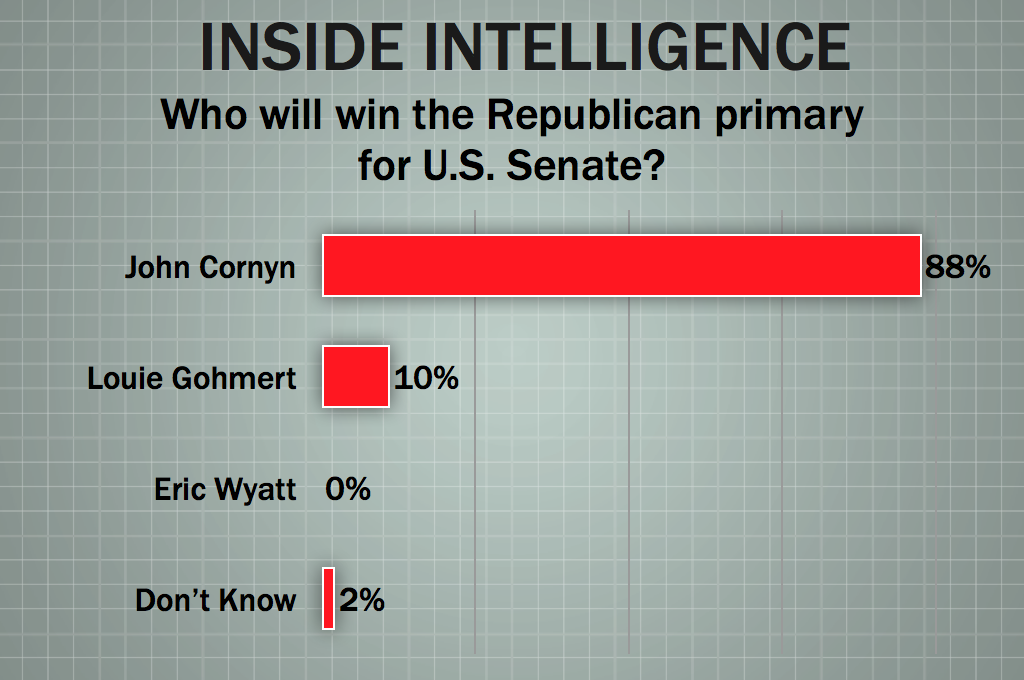 • "Other than liberal pundits and TEA Party cranks, who is spending any time thinking about this race? This is and will be Cornyn's seat as long as the state votes Republican."

• "I think Gohmert could give Cornyn a run for his money but Cornyn has been tacking to the right for a while now and that's probably enough for him to survive a primary run."

• "The stars and planets would have to be perfectly aligned to take out Senator John Cornyn. He will take every threat seriously and destroy it."

• "Cornyn wins easily. Although if Gohmert runs, it will be a fun campaign to watch."

Who do you think would win the Republican primary for governor? 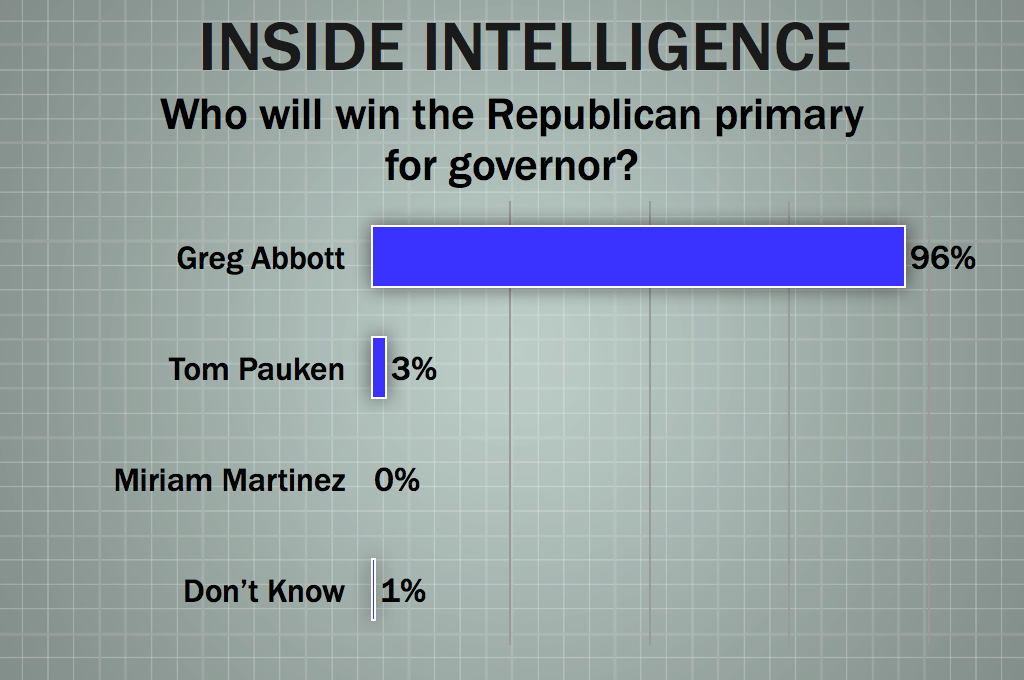 • "Experience, results, message and money. Unless Abbott moves out of state, this race is over."

• "Abbott is defeatable, not strong and a duplicate of Rick Perry. Pauken really needs to take advantage of it and set-up himself as the anti-establishment candidate and win this mother out."

•  "Seriously? Is Evan Smith allowing the interns to come up with these questions? The primary is Abbott's warm-up match before the main event."

Who do you think would win the Republican primary for lieutenant governor? 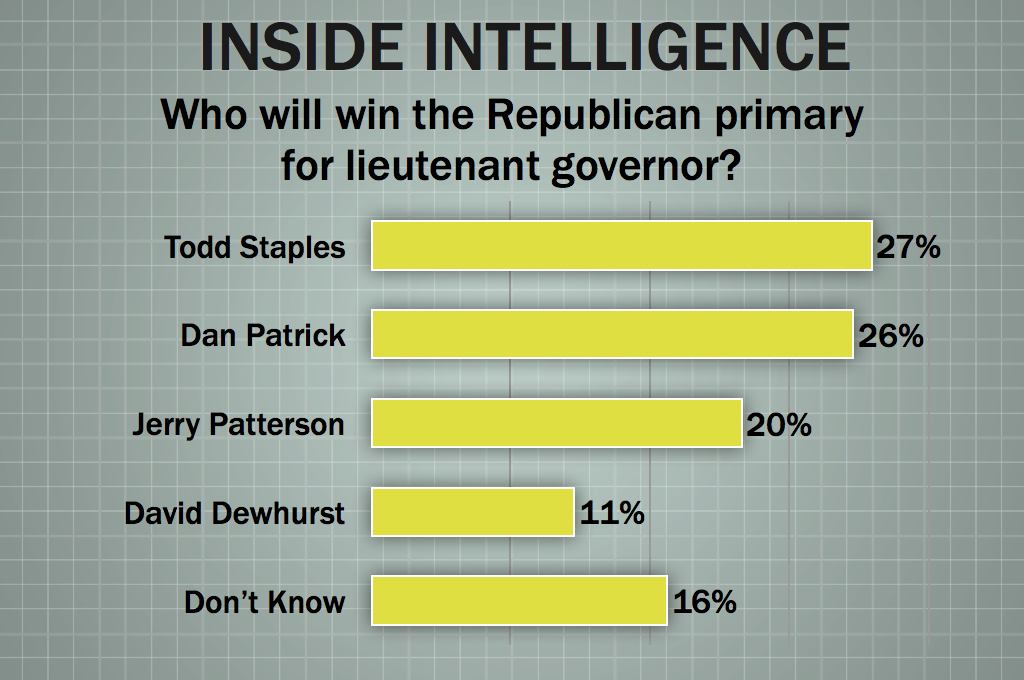 • "The establishment guys are either quietly backing Dewhurst or shilling for Staples. If Patterson can raise some money, he will surge to the top."

• "Despite his problems among party activists, the others will divide the opposition vote, and that, combined with the Dew's money, will likely get him there."

• "Governor Dewhurst should retire and let the rest duke it out. #getaclue #timetogo"

Who do you think would win the Republican primary for attorney general? 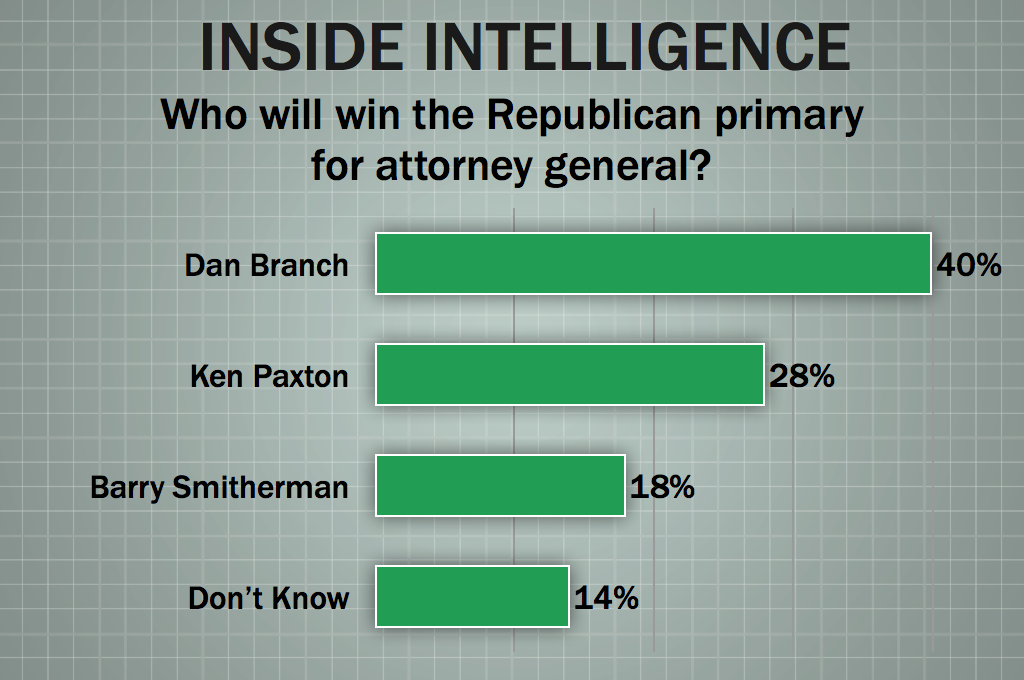 • "Smitherman's more pugnacious than the other two and that'll win favor and support in the primary."

• "Dan Branch has done a lot of work in the past few weeks to make this a toss-up between him and Smitherman. Paxton chose a painful way to retire from the Senate."

• "Paxton is going to surprise. He has the "I challenged the Speaker" and has a large base."