For all of the speculation about what high office Sen. Wendy Davis, D-Fort Worth, ought to seek in 2014, nearly half of our insiders say she ought to stay put. About a fifth (22 percent) said she ought to run for lieutenant governor in 2014, and 16 percent said she should run for governor.

That said, the overwhelming majority — 74 percent — said neither Davis nor any other Democrat can win a statewide race in Texas in 2014.

The federal government asked a panel of judges in San Antonio to require Texas to seek federal approval whenever it wants to change its election laws. That requirement was in place for decades until earlier this summer, when the U.S. Supreme Court struck down a section of the Voting Rights Act that listed Texas and other states with histories of discrimination for federal review.

That prompted a couple of questions for the insiders, and a majority (53 percent) said Texas should not be required to seek federal permission, while 52 percent said the federal courts will probably require such review in light of the request from the U.S. Department of Justice.

We collected comments from the insiders along the way and the full set of remarks is attached. Here is a sampling of those comments: 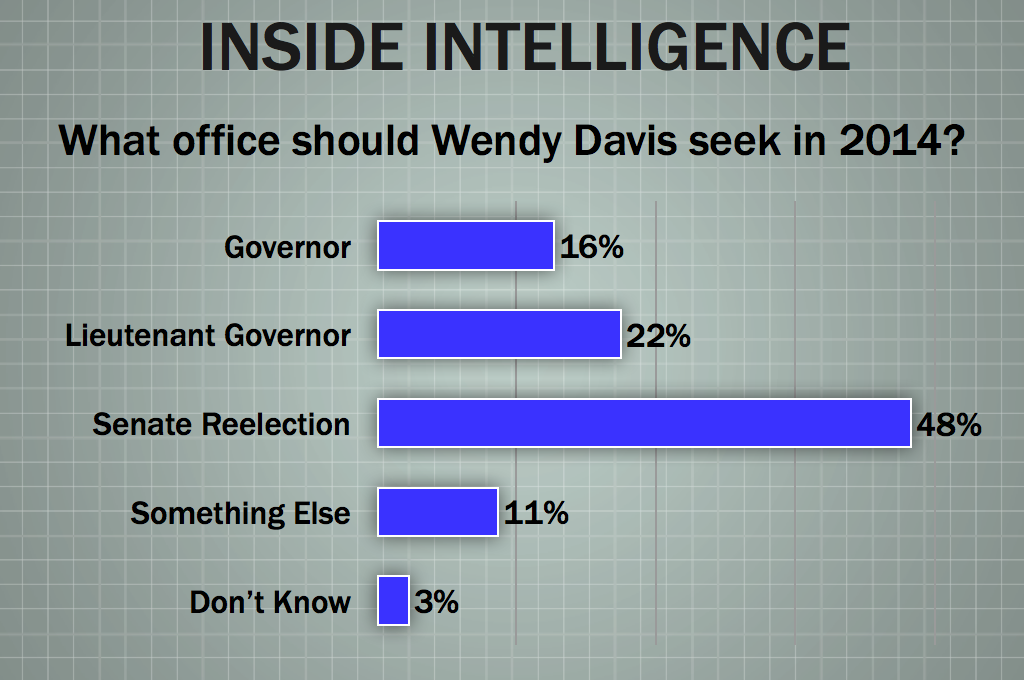 If you were advising Wendy Davis, what office would you advise her to seek in 2014?

• "Either run for re-election or run for Lt Governor."

• "Her best bet at this juncture . . . run for re-election . . . win or lose, take advantage of the opportunities to be front and center on the national stage for Senator Clinton's run at the WH . . . consider a cabinet position . . . see how the tea leaves line up in 2018 and beyond."

• "She's trapped. If she runs for the Senate again it'll be a hard race and even if she wins all her bills will be DOA. So she might as well run for governor, lose, but help build the party and continue to build name recognition for whatever comes next."

• "After the circus of the GOP primary, Wendy will look like the only candidate with any common sense."

• "Reelection is the only job she has even a slight chance of winning."

• "Better to be a Senator with a platform than an 8 point gubernatorial loser."

• "While Wendy Davis is being told how she should run for Governor and it appeals to her ego, that is the same sucker thinking that got Perry into the Presidential race.  It is all flattering and emotional, but there are no hard stats that show how she can win.  In a Davis run for Governor the Castros win."

• "I can't answer this question; I'd hate for her to read my answer and take the advice.  My personal preference is she run for Governor, get beat and ride off into the sunset, allowing R's to pick up SD10."

• "Strike while the iron is hot and aim higher. Aim for U.S. Senate run. Go big or go home! (Or as in the case of most Texas Democrats seeking statewide office, go big AND then go home.)" 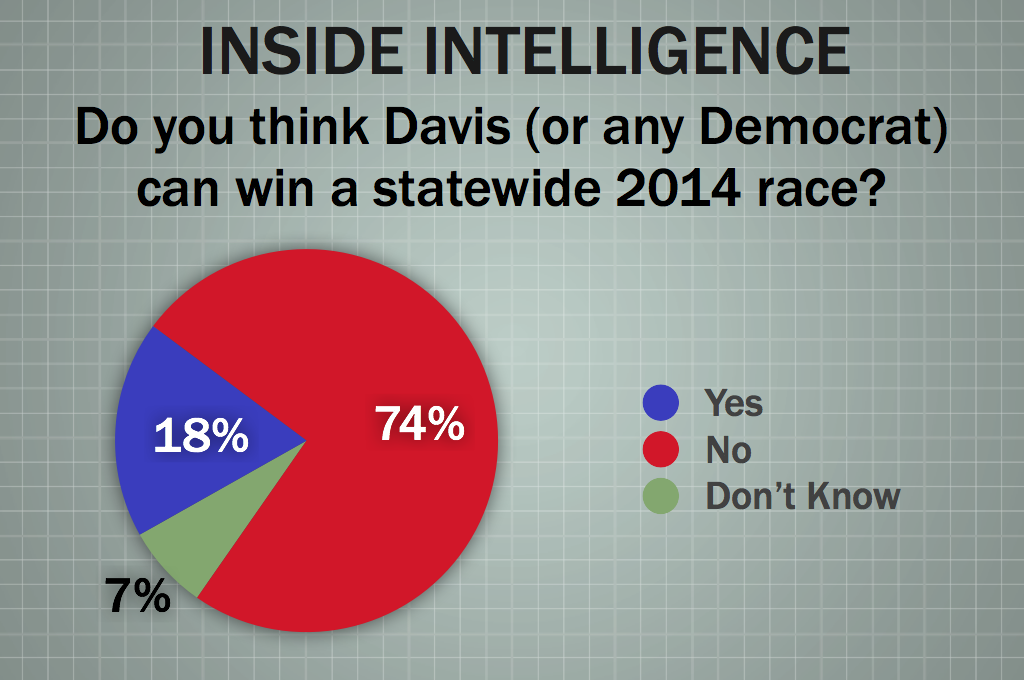 Do you think Davis (or any Democrat) can win a statewide race in Texas in 2014?

• "The last d governor won only because the r candidate told bad jokes and used bad manners. That’s not a campaign plan."

• "It is unlikely, but not impossible."

• "If the job is too high profile or too specialized, an R is going to win.  Lt. Gov may be the only office in play because most voters have heard of it but few understand it."

• "The Democratic resurgence in Texas is always just over the horizon."

• "The possibility is there, but (an it is a big but) the Republican challenger would have had to go so far to the right in the primary, that his/her words can be used against them in the general."

• "Can she win?  That's like asking if I can date a supermodel.  Sure, it's possible, but the odds of it happening are very slim." 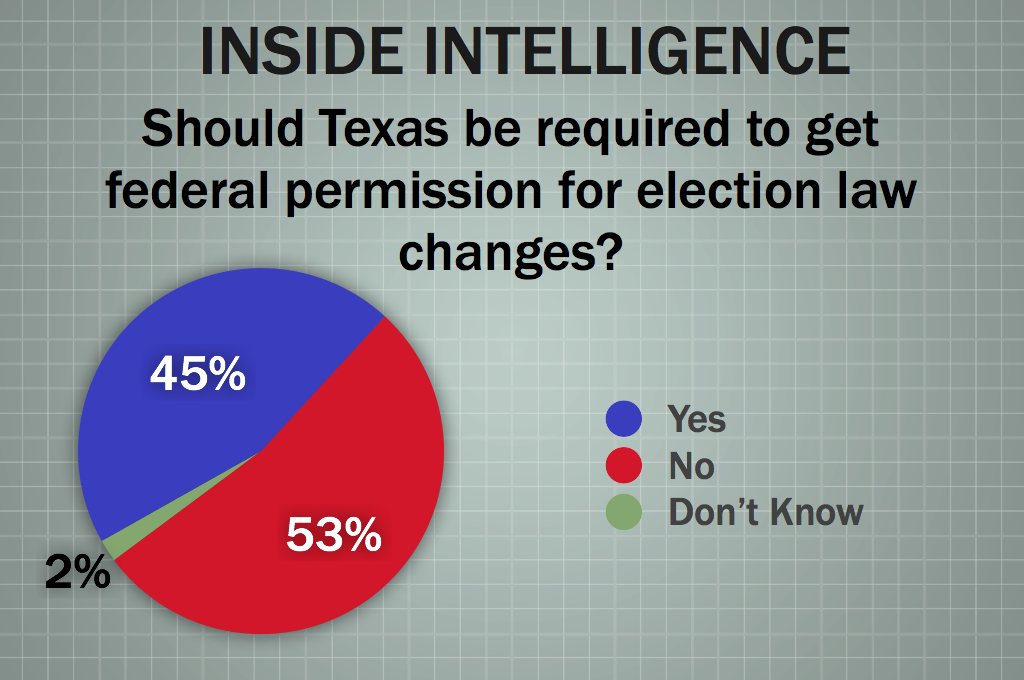 Should Texas be required to seek federal preclearance before changing its election laws?

• "The legislative record speaks for itself."

• "If the discrimination weren't so blatant the state would have a chance of defending itself against being brought back under the Voting Rights Act.  But it is, so they can't."

• "Not unless every state is required to seek preclearance"

• "I had started to believe Texas had paid for its past sins, then the Legislature drew the latest plans and I changed my mind." 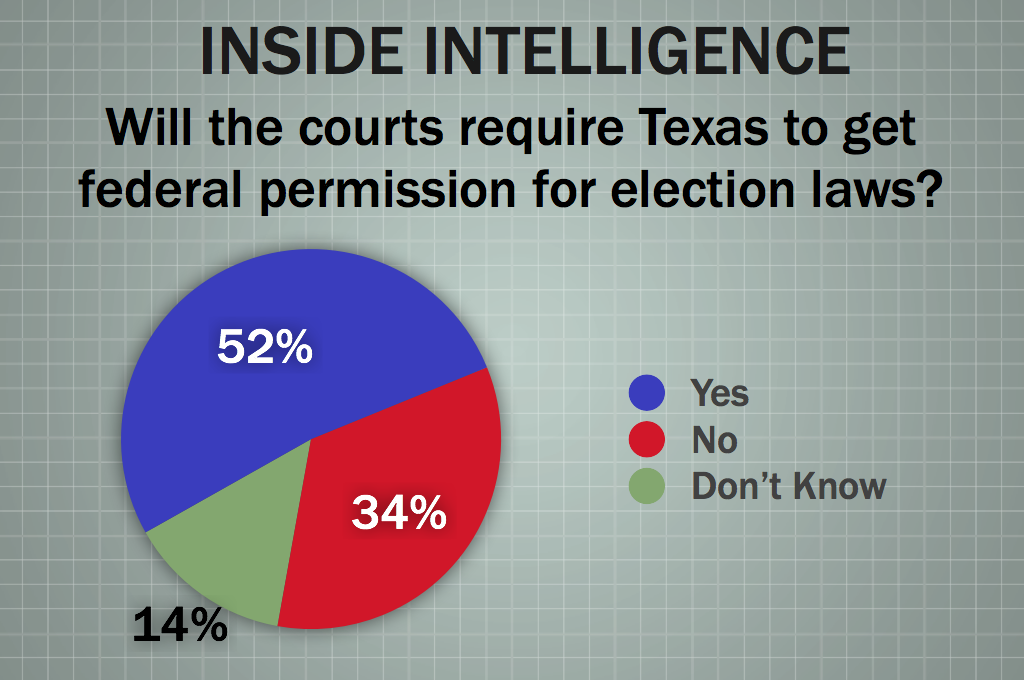 Do you think the federal courts will require preclearance for changes in the state’s election laws?

• "If any state deserves federal oversight, its Texas."

• "Despite Eric Holder's machinations to the contrary, this issue is largely dead as a statewide problem. P.S. Holder should be more worried about Chicago's election practices than those of TX."

• "When Dems ruled Texas, voter discrimination and abuse was rampant (see Duke of Duval, LBJ's '48 race, etc.).  We don't have that kind of systematic discrimination and abuse today.  It'll be hard to make a compelling case that Texas intentionally discriminates against racial and ethnic minorities when there's overwhelming evidence that's not case--indeed, the State bends over backwards to accommodate its voters (e.g., look at the various languages in which ballots are printed in this state...)"

• "The Obama administration will figure out a way to get the federal court involved in some way. Most Texans won't like that."

• "Yes, but this too shall pass. To the Supreme Court again and thrown out."

• "No way.  It's a weak argument by the feds.  Plus, let's not forget that the federal courts are probably anxious to be done with all of these lawsuits for the next few years."

• "As long as Obama is in office, they will continue to push for pre clearance.  It's part of their overall strategy to turn Texas blue."