A similarly large group expects an easy win for Greg Abbott in the attorney general’s bid for the rare open seat for governor of Texas. A smaller but still large majority believes U.S. Sen. John Cornyn will win re-election without a serious challenge.

We collected comments along the way and a full set is included. Here are some excerpts: 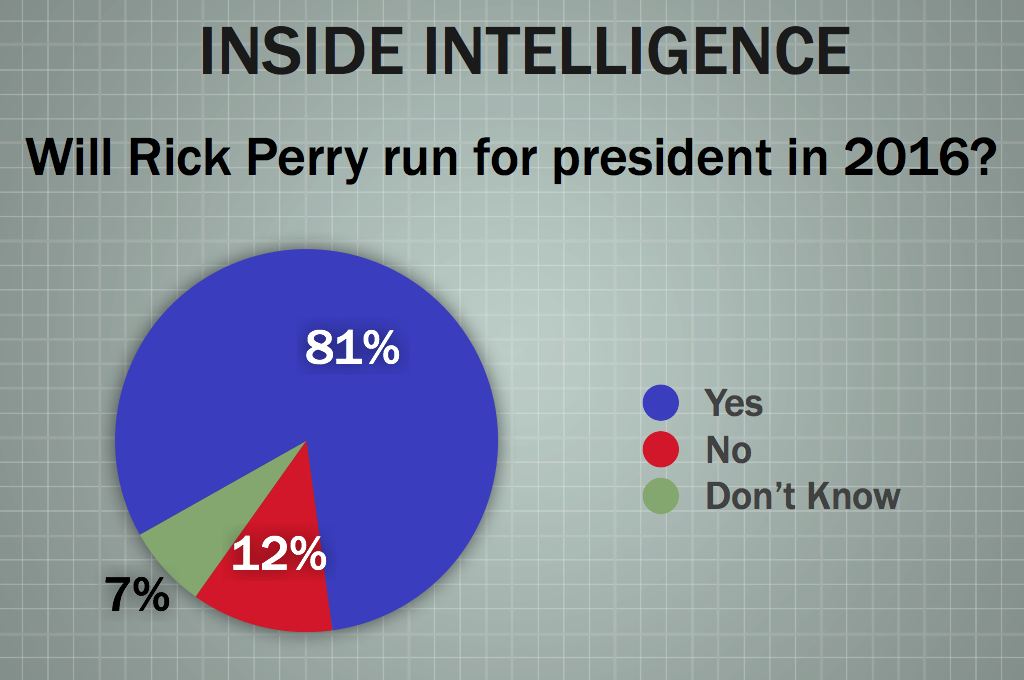 Do you think Rick Perry will run for president in 2016?

• "He is doomed to failure. The public has decided he's not very bright, and there are plenty of bright candidates available."

• "Perry is very disciplined at executing campaign plans. IF he gets good advice on what that plan should be and pays attention to all of its elements, including becoming more conversant with some national and foreign policy issues, he could put himself in a credible position to throw his hat back in the ring."

• "Perry's retirement from the Governor's office will greatly reduce his public profile and ability to raise money. His dismal showing in 2012 leaves him starting a race for the nomination nearly at zero."

• "To quote someone else's bumper sticker ... Why the hell not?"

• "He's a great fundraiser.... perhaps head of the NRC? He'll do something high profile at a national level. He's not done yet." 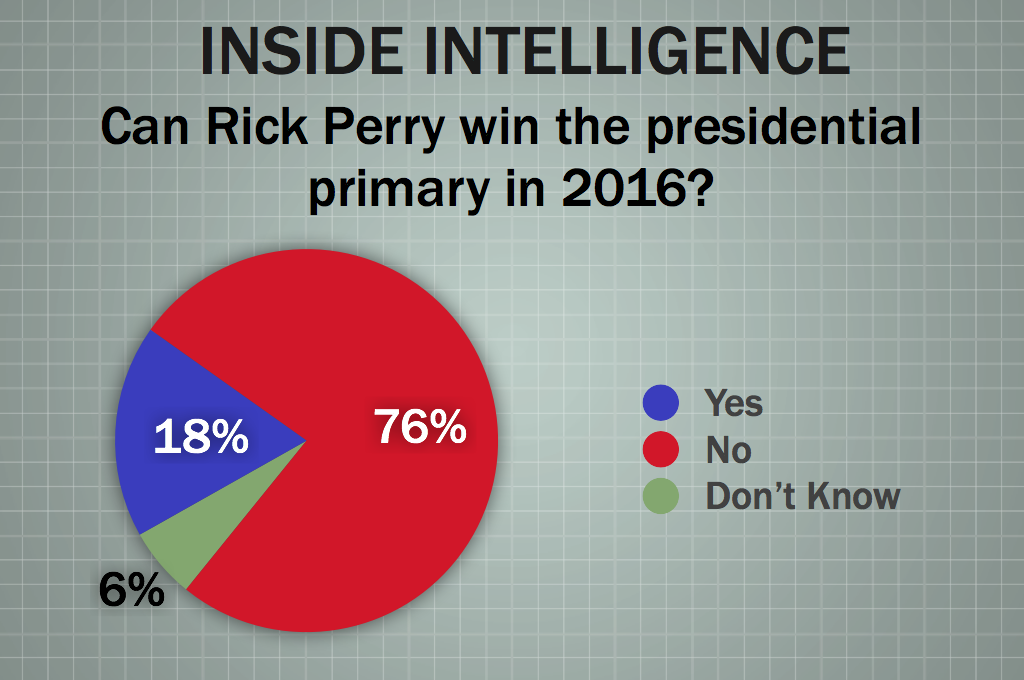 Do you think he can win the presidential nomination in 2016?

• "I think America has had enough of Texans in the White House."

• "The economy is a winning issue."

• "He will need to run a flawless campaign. He will be a better candidate, but the field will be immensely tougher. Iowa or bust. Probably has to win Iowa and SC to be viable -- a very tough road."

• "The national media will Dan Quayle him. They brought up his debate memory lapse when reporting his announcement that he would not seek re-election."

• "A lot can happen between now and then and who knows what the major issues will be in 2016, but if the economy continues to sputter along, place a side bet on him--he seems to have impeccable timing." 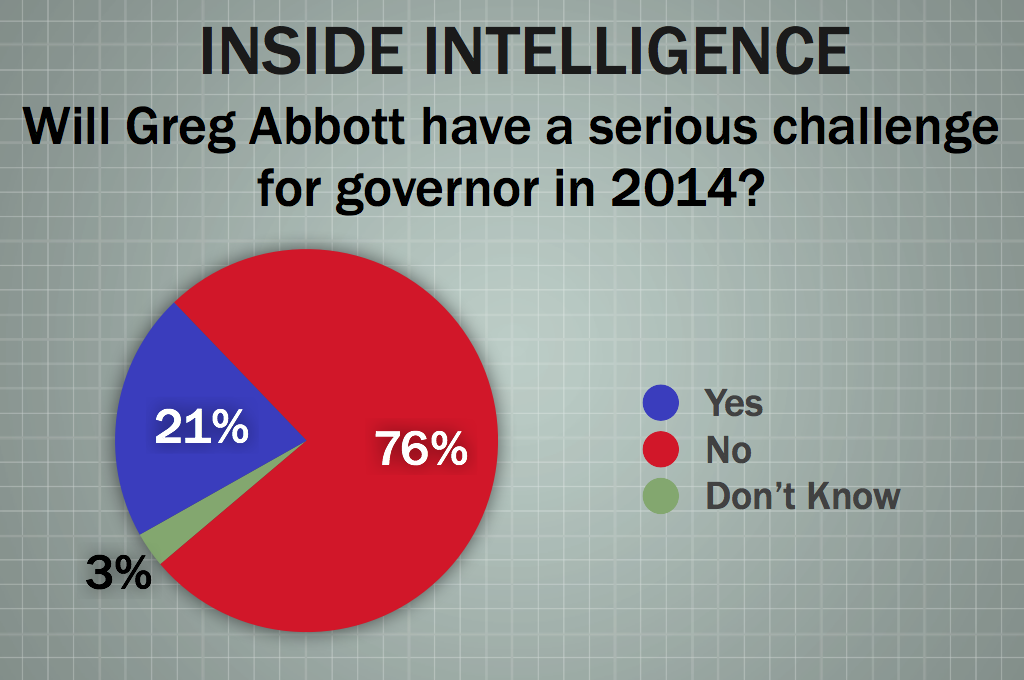 Do you think Greg Abbott will face a serious challenge in the governor’s race in 2014?

• "I like Tom Pauken but he has no money and practically no audience. Senator Wendy Davis has about as much a chance as Sissy Farenthold. Who I voted for."

• "I wouldn't underestimate Tom Pauken. Pauken could probably get a lot of independents to vote for him only if he can distinguish himself separate and apart from Abbott and the crazies."

• "Only one person in the world thinks Pauken should be governor."

• "Hard to compete with pockets that deep."

• "Define serious. Right now it doesn't appear so, but what if Dewhurst decides he wants to be governor instead of lite gov? All of a sudden that $20M war chest Abbott has is negated. Still, Dewhurst will have issues in a GOP primary, but he could be a serious contender."

• "Greg Abbott is a strong candidate. The race is his to lose." 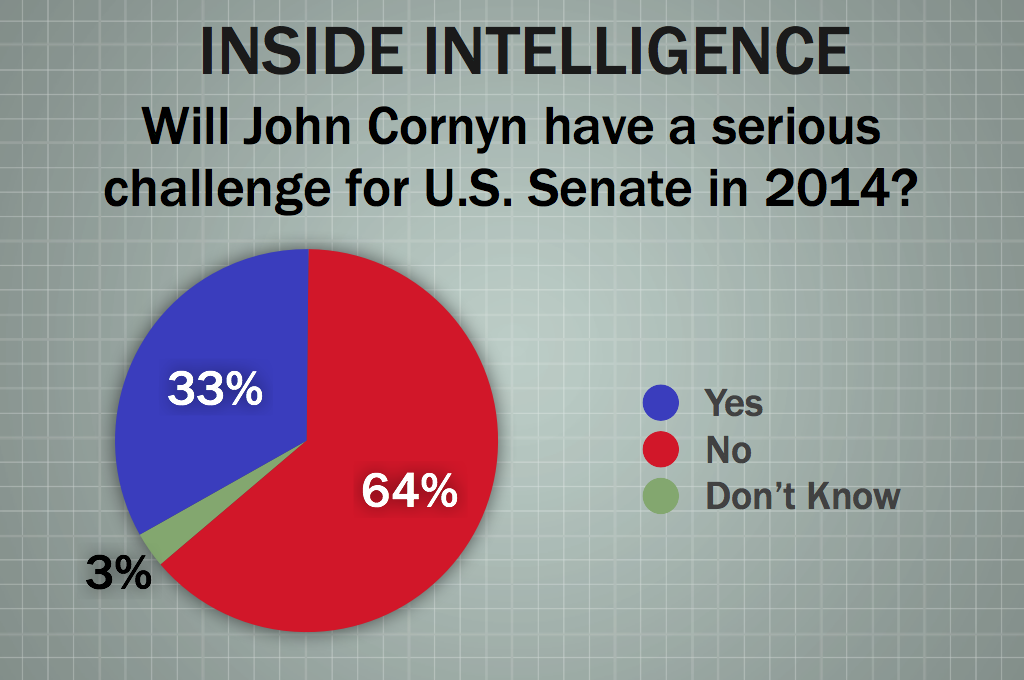 Do you think U.S. Sen. John Cornyn will face a serious challenge in his bid for reelection in 2014?

• "Most everyone likes vanilla."

• "There will be some Tea Party rumblings, but he's turned himself into enough of a Ted Cruz clone in his votes the last year that he should squeak through without a serious challenge."

• "Lots of frustration among the grassroots about Cornyn's middle of the road votes."

• "In races for US Senator, Ted Cruz was a one-time phenomenon. Yes there will be a Tea Party candidate running against Cornyn, and yes that opponent will be attacking Cornyn for not being conservative enough, but the opponent (whoever that turns out to be) will not have the skill, resources, plan, personal energy, speaking ability, fundraising ability, etc., necessary to win statewide."

• "The Democrats are at least 6 years away from fielding candidates."

• "Next to Dewhurst, Big John is the most vulnerable of the Republican statewide incumbents due to low name ID and no personal connection with the Republican electorate."

• "Certainly will be challenged, but think this race will show the weakness of the TEA party, representing about 30% of the primary voter."