Rick Perry has told supporters he will have a bit of “exciting future news” to share on Monday, spurring all sorts of speculation about whether he will run for re-election, for president in 2016, for both, for neither or something completely unexpected.

All that’s at stake is everyone else’s political plans. And as is his custom, Perry is not dropping any real hints.

Voting rights litigation was reactivated by last week’s Supreme Court decision freeing Texas and other states from federal preclearance and by the Legislature’s enactment of congressional and legislative maps that closely match those drawn for temporary use by federal judges in 2012. A three-judge federal panel held a hearing, denied the state’s motion to dismiss the case (for now) and asked the lawyers to write brief on what ought to happen next.

The state argued that the contested 2011 maps drawn by lawmakers are now dead — thanks to the Supreme Court ruling — and that the newly approved maps are not subject to preclearance or subject to the litigation that started with the older and now defunct maps.

The plaintiffs argued that the 2011 maps are in effect until September — that’s when the new maps take effect — and they want a ruling on whether those maps intentionally discriminate against Texas minorities.

Such a ruling could be the basis for a “bail-in” — which would mean the state must still seek federal preclearance. The issue is whether challengers to the state have to prove its maps discriminate or otherwise violate federal election laws, or whether the state has to prove that they don’t.

State officials point out that they wouldn’t have had the ability to make much argument at all had lawmakers not approved new maps. Attorney General Greg Abbott has been sensitive to jibes about his handling of the case over the last two years — particularly when legal issues delayed the 2012 elections from March to May. His defenders say his strategy of getting new maps out of lawmakers is the state’s only decent shot at ending federal oversight of the process.

Then there is that third thing — the special session announced after Senate Democrats successfully derailed proposed abortion restrictions in the first special session.

It’s on a fast track this time, already voted out of a House committee and up for a Monday hearing in the Senate.

Time is with the Republicans now, and demonstrators on both sides of the issue stand ready with their blue and orange T-shirts. That will eat up the next week or two.

Here’s the current speculative list of statewide candidates, which still does not include any Democratic names: 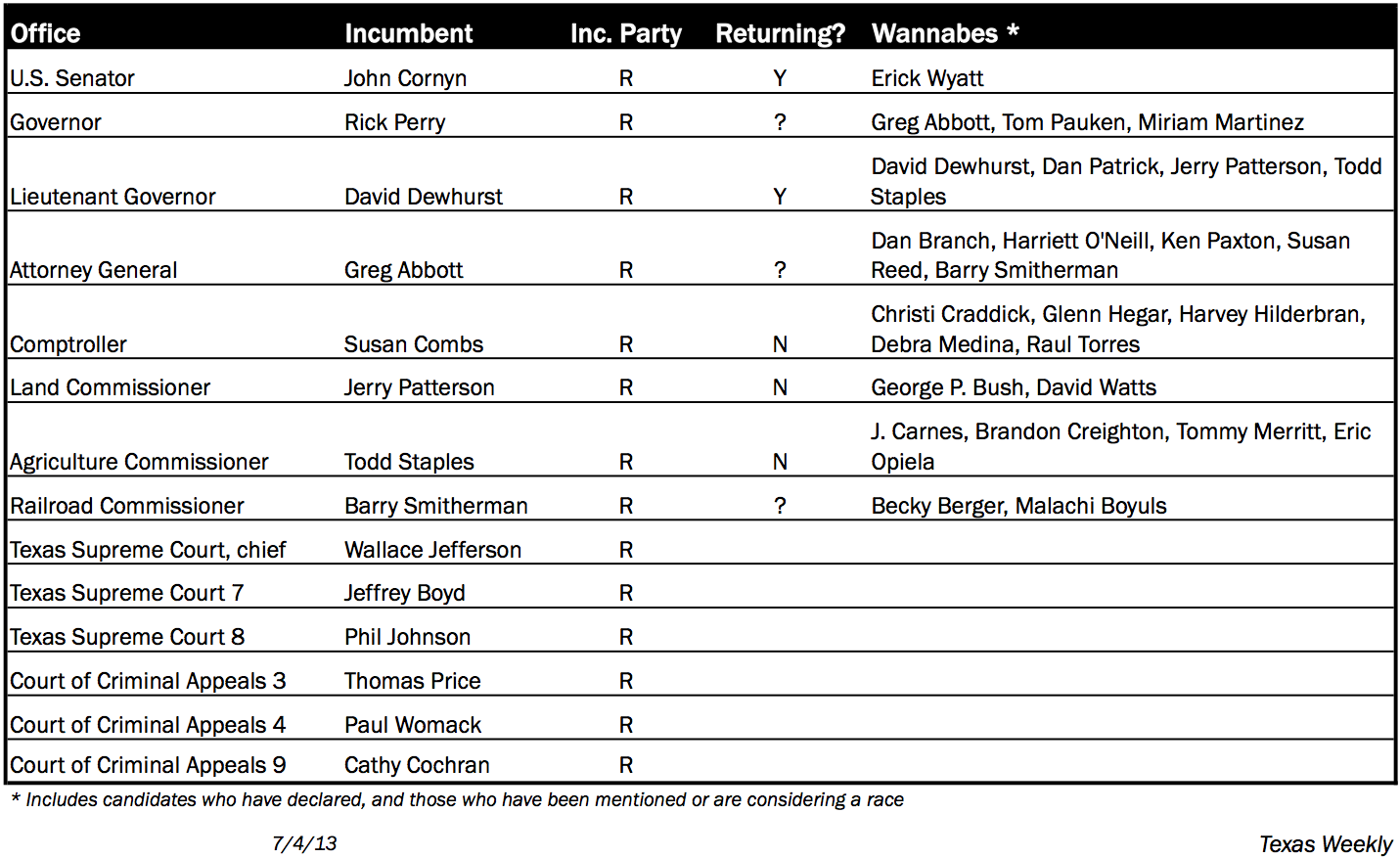