This week, we asked the insiders some questions we were also asking Texas voters in the University of Texas/Texas Weekly Poll, and we’ll compare the insiders with the public in a later post. For now, we’ll stick to the political and government folks who take part in Inside Intelligence

Exactly half said things in the state of Texas are going in the right direction, while only 36 percent said as much about the country. The local grass is greener, apparently: 59 percent think the country is on the wrong track, while 47 percent said the same about the state.

Just over half said the quality of public education in the state is good (another 2 percent rated it excellent) while 38 percent said it’s not very good (and 4 percent chose “terrible”).

Only 43 percent said high schools should be trying to get all students ready for college, while 56 percent disagreed with that idea (a position that puts them in agreement with recent legislative action).

Fewer still — 38 percent — said they would oppose a ban on state officials collecting public pensions while still on the state payroll. Supporters of a prohibition accounted for 58 percent of the answers.

And in the midst of a redistricting debate, 62 of the insiders said they would support taking the mapmaking away from legislators and giving it instead to an independent, appointed commission.

We collected comments along the way and have attached the full set. A sampling follows: 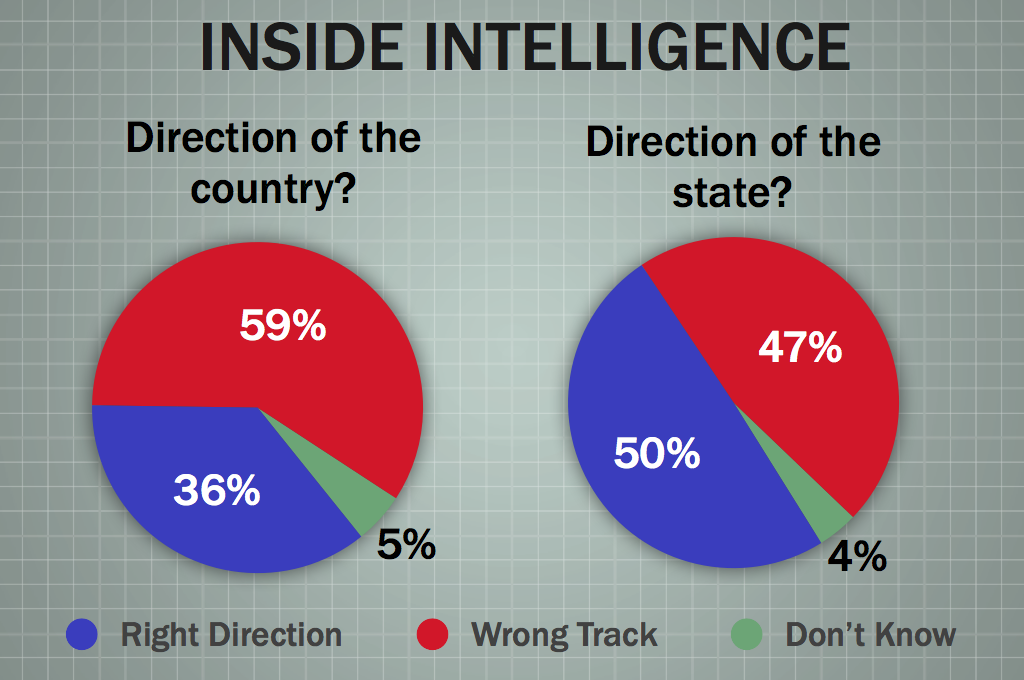 • "The nation could be better. We should be a world leader in democracy, education and honoring diversity. People living in America should have access to universal pre-k and health care. America should pass a real and just immigration law that provides valid path to citizenship, and, workers should be paid their worth. Voters should be able to vote and have their vote count. The nation has a long way to go."

• "If it were not for the ridiculous partisan gridlock, I'd say 'right direction'."

• "I am more proud of being a Texan than an American these days."

• "If you were to ask me that question in 2011, I would have said on the wrong track. I've seen us bounce back from some serious budget issues, criticism aside as to how we balanced the budget, but I think the state as a whole pitched in and is helping us get to better and higher ground."

• "As a conservative, I am obligated to say we are moving in the right track. But, unless our state fixes public education, our infrastructure, and our water issues, we are headed to a rude awakening."

• "Impoverishing public education and building an economy based on natural resources and low-wage service jobs is no way to prepare for competition in a technologically advanced world."

• "Seemingly ok, but not addressing big ticket items that we need to sustain the state through difficult economic times and during major growth time..."

• "Despite the best efforts of many at the Capitol, the forces of 1950 remain strong."

• "It would be helpful if state leadership wasn't so insulated, wasting far too much time bloviating about social issues. Still, our government spending is in check, we are slowing giving our educational system a chance to succeed and we remain the job creating engine for the entire country." 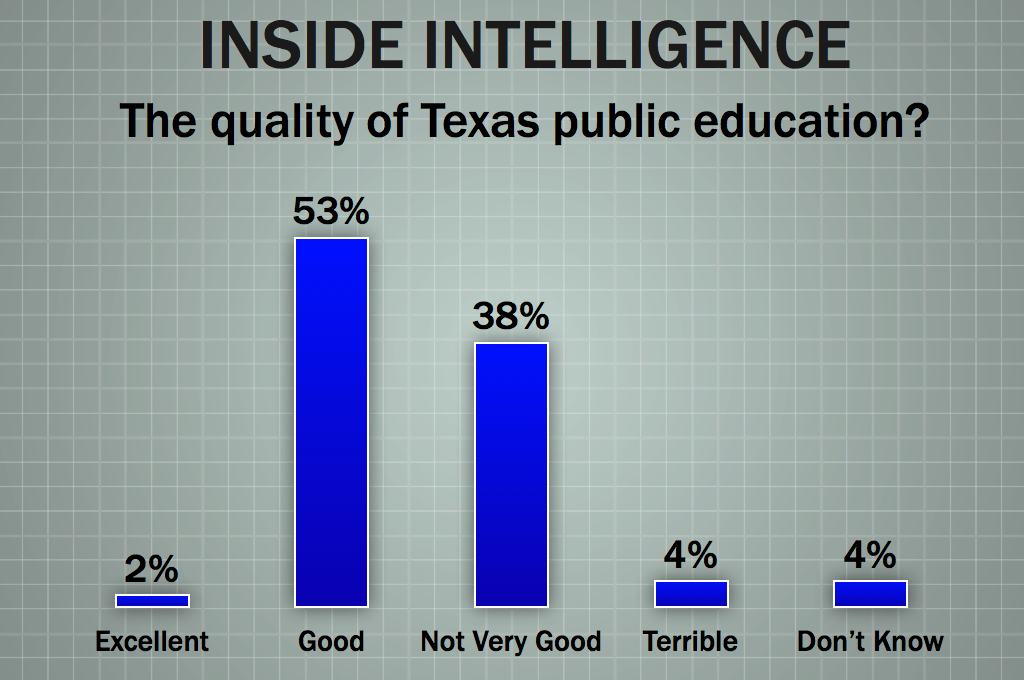 Would you say that the quality of public education in Texas is:

• "Too many children face poverty and chaotic family lives in their formative years, and the testing industry is consuming too much school time and resources. Despite these challenges, public education does better than one should expect."

• "We won't really know anymore thanks to HB 5. Soccer moms have made sure everyone now gets a diploma... er, ribbon. (And now will move to get only healthy snacks served at all commencements.)"

• "We already spend a boat load and in many cases still get crappy results. When will we learn that more money does not solve the problem. Look at HISD. Cesspool corrupt and total failure. And they want more money. REALY????"

• "It's far better than average for the U.S., even though funding has been below average. Anglos, Hispanics, blacks all get a better education here than in most places."

• "No objective person can look at our dropout rate, literacy rate, and juvenile crime rate and claim the quality is good."

• "The Teachers Unions, who proved they control the Legislature in the most recent session, are not interested in quality education. They are only interested in themselves. Why else would they try to block an increase in Charter Schools -- (we don't mind having a few exemplary schools, we just don't want a lot of them). Public education will never succeed in Texas until that union is busted."

• "The answer to this question, unfortunately, is it depends which school district you are in. Some are beyond excellent and some are terrible."

• "I went to public school and became a lobbyist. I sure hope education has improved since the days when I was there." 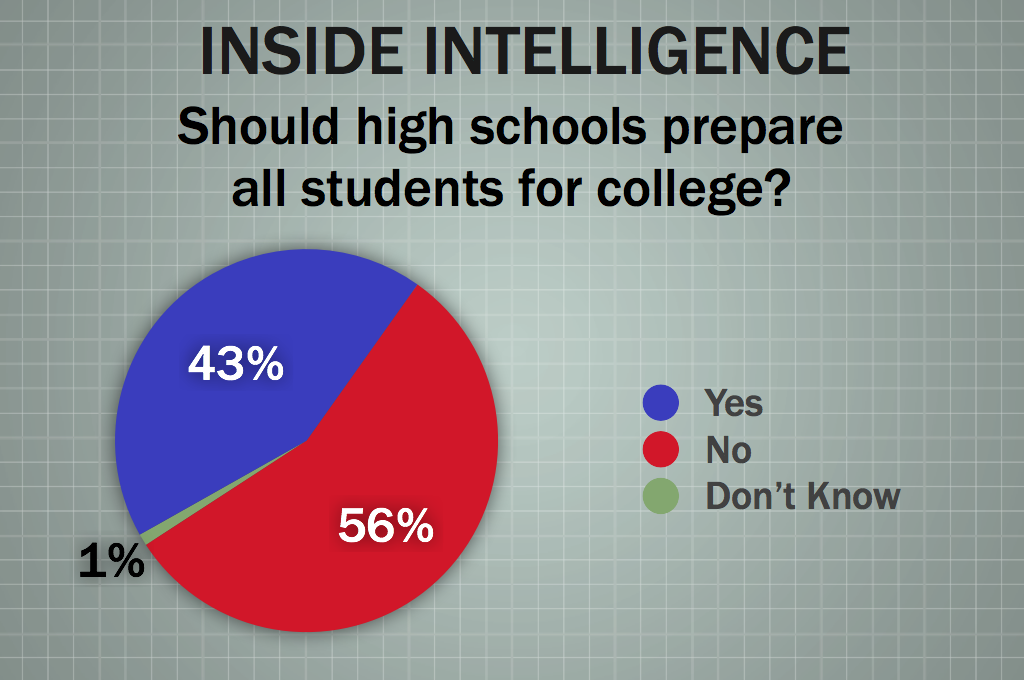 Do you think that public high schools in Texas should have course and graduation requirements that encourage all students to attend college?

• "There are many competent professions that do not require a college degree, but are just as technologically demanding e.g. have you looked under the hood of a car lately and the technology required to make it function?"

• "But we can do this with multiple pathways a la HB 5. Saying we should try to prepare all students for postsecondary education doesn't mean we should try to cram them into a one-size-fits-all approach. The reductionist thinking of critics of HB 5 reduces everything to Algebra II--simplistic thinking for a complex topic."

• "If every student received an adequate education in K-12, then he/she can choose for themselves. That's public education's responsibility--it is NOT to decide for the students."

• "Why is it that the 'college isn't for every kid' line comes mostly from white males in the Legislature, superintendents (more white males) who don't really want to be held accountable for educating minority/low-income kids, and soccer moms from the suburbs?"

• "This is a ridiculous idea. College is not for everyone."

• "It should encourage college as next step. If they choose vocational school instead, at least it is expected that they do SOMETHING to educate for future employment."

• "College isn't for everyone. If you don't believe that, go talk to the folks in the Eagle Ford or the Permian Basin who are making six figures driving trucks." 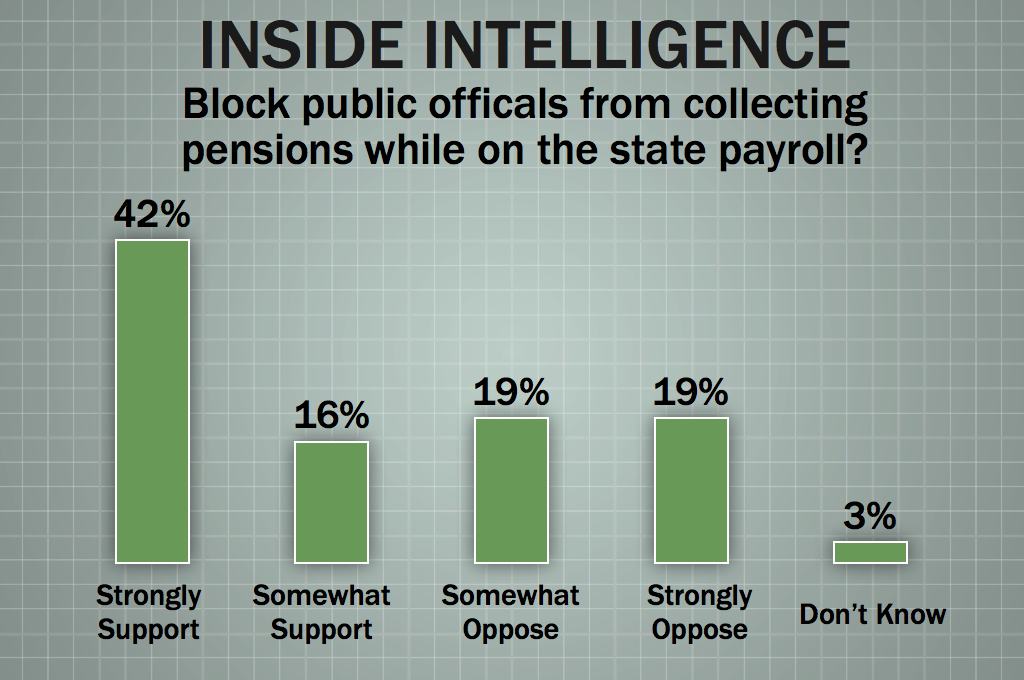 Would you support or oppose prohibiting elected officials from receiving public pensions what they are still collecting a state paycheck?

• "There are many talented people in state government who are working for a fraction of their worth. If they can 'double dip' at the end of their career from different agencies or branches of government as an incentive to continue their public service, that's an expense the taxpayers should be willing to accept."

• "I strongly support prohibiting state elected officials from receiving a pension without severing employment. They should be subject to the same laws and rules as other state employees."

• "Frankly, this position would encourage many long-time elected officials - mostly bad ones - to retire sooner."

• "Just serve and then get your cushy pension. If you want it, then give up your office." 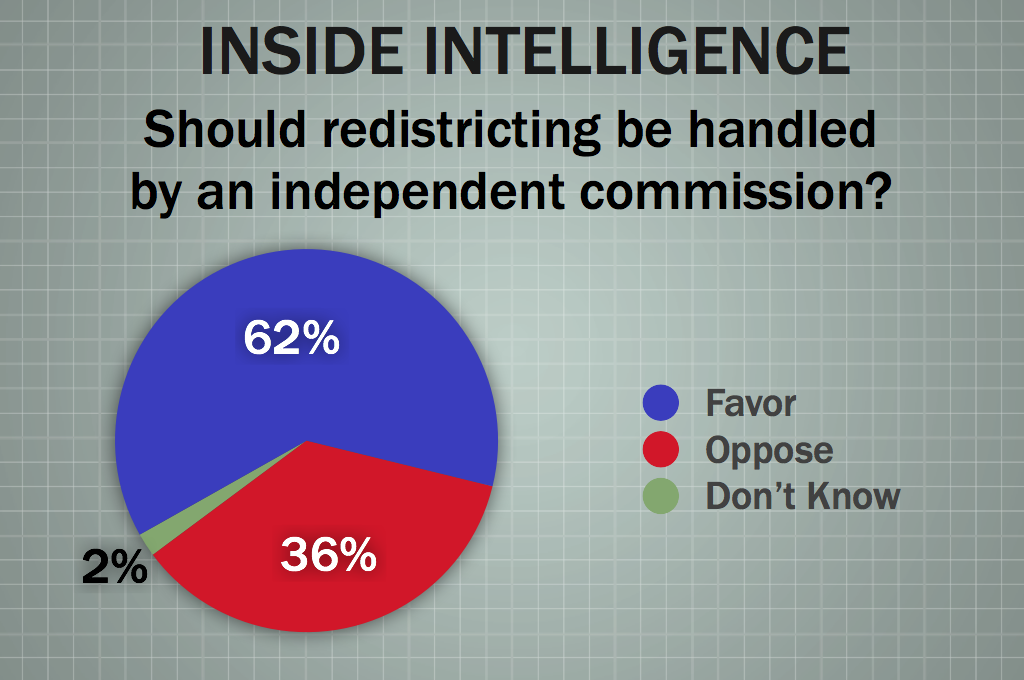 Would you favor or oppose taking redistricting authority from the legislature and the governor, giving it instead to an independent, appointed commission?

• "It's already controlled by the courts and that's worked out sooooo well. Give it back to the lege and limit litigation. If plaintiffs can't make their case by the filing period, go with the legislative maps."

• "Politics will determine the lines regardless. I'd rather have the authority in the hands of elected officials who can be held to account."

• "I would favor letting the computer draw the most compact districts for each elected official in each elected body. If the Legislature then wants to fight over those boundaries, so be it. Again, the laws we get are only as good as the people we elect."

• "And who really thinks handing it to a commission would be any less political?"

• "You cannot take politics out of the process. And an appointed commission is less accountable."

• "It depends on who does the appointing and the qualifications for service. However, there is a way to build a better mousetrap. What we have right now results in elected officials who are responsive only to their primary electorate, pushing our politics to the margins and making long-term problem solving a pipe dream. It's a strange way to run a government."

• "I love when legislators fight one another. It makes it easier to kill bills."