Sure things aren’t what they used to be. The special session ends next week, and lawmakers haven't wrapped any of the handful of issues on their agenda. The proverbial fat lady hasn't sung yet, but she is backstage, warming up.

Lawmakers, suddenly aware of what time it is, will work at least one day this weekend to try to get finished before their Tuesday deadline.

If the script calls for legislators to rubber stamp maps that were drawn by federal judges for the 2012 elections, and if legislators do that on two of three maps but change the lines in the third one, does that mess up the movie?

Attorney General Greg Abbott’s idea of getting lawmakers to ratify maps drawn by federal judges — and by doing so, to abandon the maps approved by lawmakers two years ago and all of the losing litigation now attached to them — was going just great until the Texas House arrived. Like the Senate, the House approved the Senate and congressional maps as drawn by the courts without adding so much as a fingerprint. But they made some changes to the House map, which now goes back to the Senate for a blessing or a demand for negotiation.

Only two questions really matter at this point, and they’re related: What maps will be used in 2014 and will the primaries take place in March or later? That ball will move from the Legislature — whatever it ends up doing during its summer overtime — to the courts.

Abortion legislation is still winding through the Legislature with time running short enough to make some of the players nervous about Senate filibusters and House chubs. That’s what happens when you take two weeks off in the middle of a 30-day special session, but it’s also too early for any pronouncements. There is still time to finish if they want to. The Senate took out a ban on abortions after 20 weeks, but House conservatives are pushing to add that back in. If the versions are different, they’ll have to reconcile them and take them back to the bodies for approval. That takes time and gives opponents, in the closing days, some tools they didn’t have earlier in the session.

Transportation funding is in the House, where the Rainy Day Fund is starring as the Golden Calf and nitpickers from the right and the left are starting to find some substance to their arguments about splitting state income destined for the RDF and sending half of it to highways. This one is very much alive but no sure thing.

The fix to sentencing guidelines for 17-year-old capital murderers has become a constitutional law seminar and bogging down what was probably the simplest — most straightforward, anyhow — of the special session’s issues. Like the others, it’s alive and incomplete.

Sideshows are abundant around the close of this special session. Appropriations Chairman Jim Pitts, R-Waxahachie, is testing support for impeachment of University of Texas Regent Wallace Hall, who was confirmed by the Senate earlier this year. State Rep. Sylvester Turner, D-Houston, is looking for allies in finding funding for the public integrity unit at the Travis County district attorney’s office. That funding was vetoed by Gov. Rick Perry because of his disapproval of Rosemary Lehmberg, the district attorney. She served jail time for drunken driving earlier this year and Perry conditioned continued state funding of the unit on her resignation. She didn’t go and he vetoed the spending and Turner is trying to find a way to put it back together.

And the political announcements are about to start. Maybe. The governor told Bloomberg News that he will announce his plans for 2014 by July 1 and his plans for 2016 sometime after that. All the others are waiting, as you can see by this list of known and mentioned candidates for various statewide offices (the caveat that some are just looking and some will actually run is the explanation behind the asterisk in the chart). 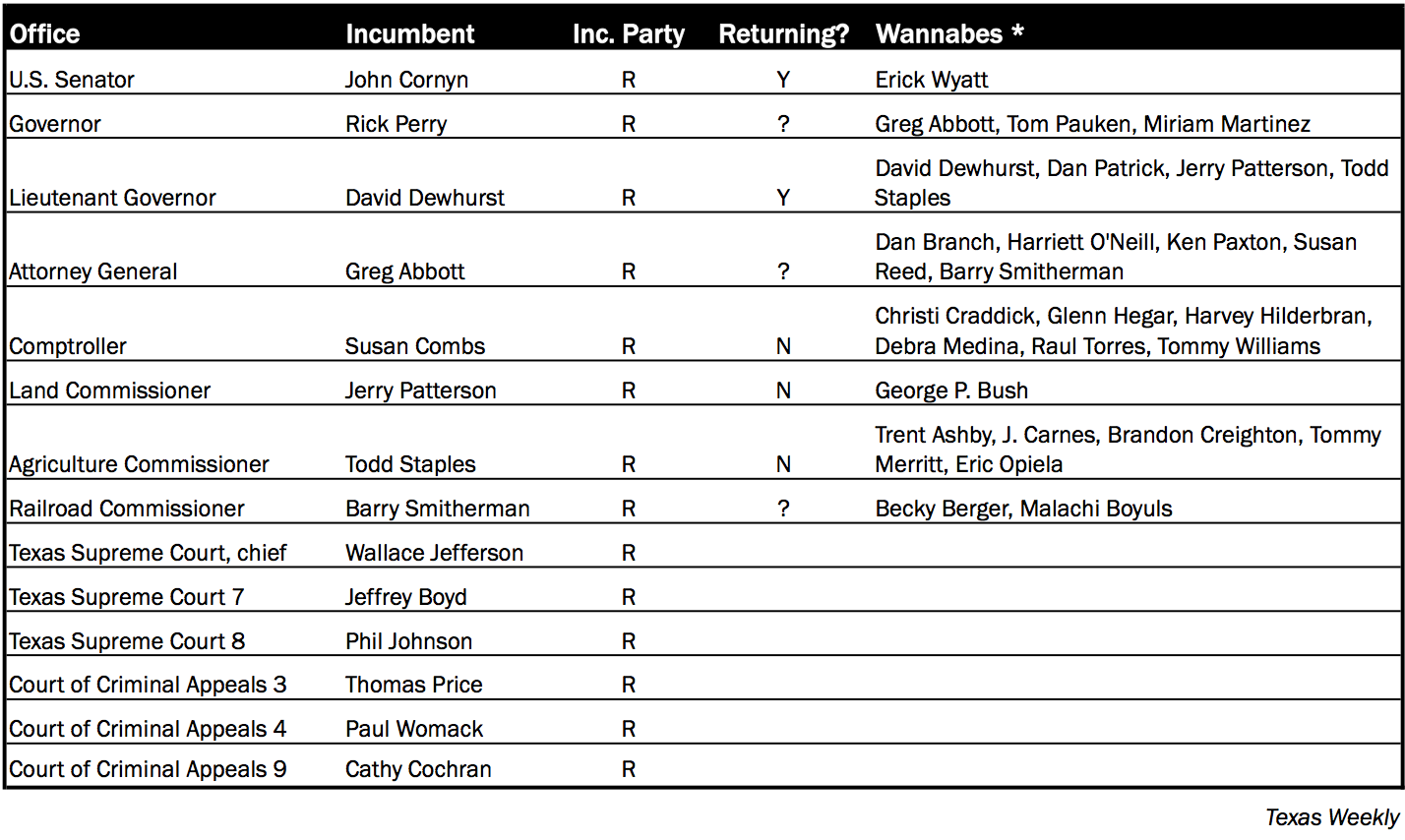